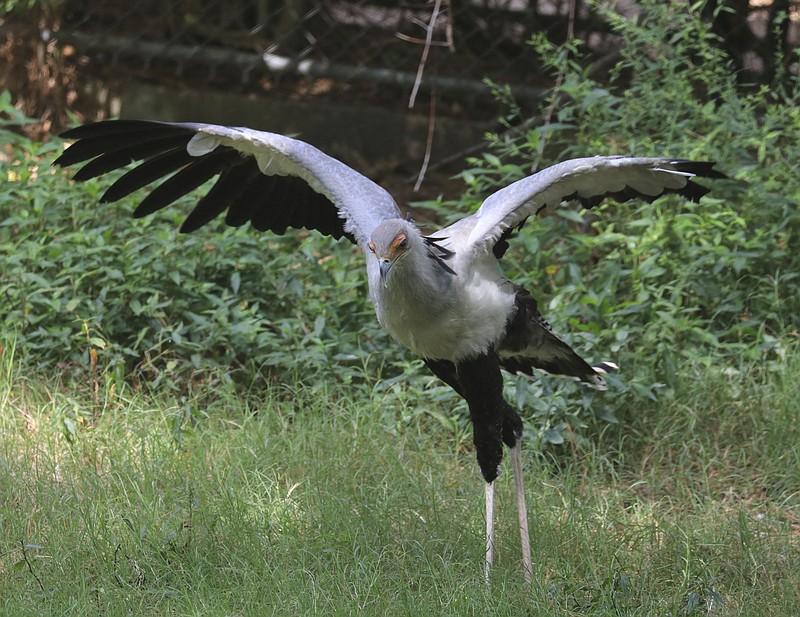 A secretary bird spreads its wings at the Little Rock Zoo in this July 2019 file photo. (Arkansas Democrat-Gazette/Staton Breidenthal)

Some birds at the Little Rock Zoo are temporarily off public display as a precautionary measure against avian influenza.

Avian influenza, or the "bird flu," has not been detected in Arkansas this year, but it has been on the rise in other parts of the country, including Tennessee, Missouri and Texas.

The state Department of Agriculture implemented its Avian Influenza Emergency Rule on March 23. It will remain in effect until at least July 20.

For now, the Little Rock Zoo has isolated most poultry and geese and closed its tropical bird house to the public. Staff that enter areas with susceptible birds are taking precautions, like giving themselves "foot baths," which entails washing their shoes with disinfectant to prevent introducing contaminants to the birds' enclosures, staff veterinarian Dr. Sara Stoneburg said Thursday.

She added that more species of birds could be moved into isolation if avian influenza cases are discovered closer to Little Rock.

"We hope we never ever get a case on the grounds because it does become a major issue," Stoneburg said.

The bird flu is of greatest concern for the poultry industry, but zoos across the country are also taking precautions and bracing for cases of the illness that has killed nearly 23 million chickens and turkeys in the U.S., according to the Associated Press.

The state rule requires owners of "backyard birds," such as chickens and ducks, to keep the birds under a roof or other cover to protect them from infected droppings of wild birds traveling overhead. It also prohibits owners from taking their birds to shows or exhibits where they could mingle with birds from other flocks and spread disease between them.

The regulation applies primarily to poultry birds, meaning species that can be raised for meat or egg production, such as chickens, turkeys, pheasants, ostriches, emus and guinea fowl.

"The rule's purpose is to not sit and wait for the virus to hit Arkansas and respond, but to be proactive and prevent the virus from ever getting to Arkansas," said Patrick Fisk, the Agriculture Department's livestock and poultry division director.

The Little Rock Zoo closed its tropical bird exhibit March 28 in response to the rule and "to protect our birds from any visitors from other states," Little Rock Zoo spokeswoman Joy Matlock said.

Secretary birds, which are relatives of vultures, and vultures themselves are also not on exhibit, she said.

Stoneburg said zoo officials would be watching the spread of the flu closely, noting the zoo has a responsibility to protect its animals, especially endangered species, like its South African penguins.

Fisk said it is up to individual owners of poultry birds, whether they are in zoos or backyards, to comply with the rule. He also said the state tailored its precautions to have a minimal effect on poultry commerce.

"We want to keep business going because we have a lot of folks that sell poultry at flea markets and auctions," he said. "In the event of an outbreak [of bird flu], that will be stopped."

The rule exempts chicks and ducklings 3 weeks old or younger that come from a flock approved by the U.S. Department of Agriculture's poultry breeding certification program. This means chicks sold at farm supply retailers, such as Tractor Supply Company, are largely exempt from the rule, Fisk said.

Bird flu is often transmitted during seasonal migration. Most migratory birds have already traveled north by now, but the Arkansas Game and Fish Commission is monitoring the uptick in bird flu nationwide, veterinarian Jennifer Ballard said.

"We have systems in place to monitor bird mortality if that's reported, but we haven't had anything along those lines," she said.

The commission will assess the prevalence of the disease again in the fall before the start of duck season, she said.