COLLEGE SOFTBALL Hedgecock drives in game-winner for No. 10 Arkansas 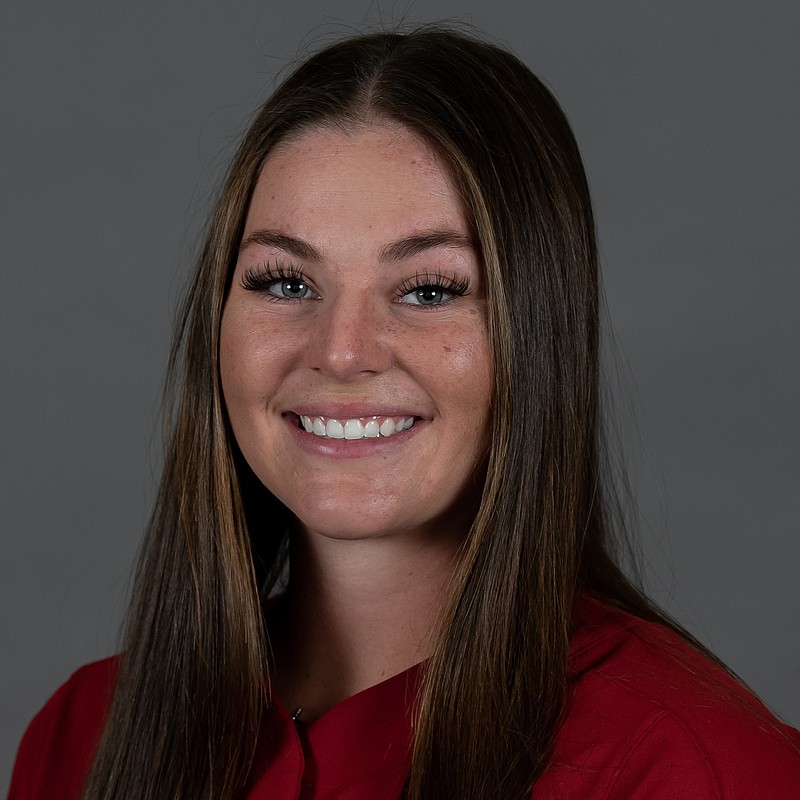 FAYETTEVILLE -- The University of Arkansas softball team continued its mastery of Auburn, but it needed some late-inning offense to do it Saturday afternoon at Bogle Park.

Rylin Hedgecock's pinch-hit sacrifice fly in the bottom of the sixth proved to the difference in the No. 10 Razorbacks' 4-3 win over the No. 17 Tigers in front of an announced crowd of 2,869 -- the third largest in school history.

Arkansas Coach Courtney Deifel had nothing but praise for her team and the way it was able to find a way to win its eighth straight over the Tigers. There were lots of different contributors in the win, but Hedgecock was big, she said.

"It's one of the hardest roles to have as a pinch-hitter. I mean she hasn't swung in probably three hours and for her to get in and know exactly what she's hunting and to get a ball like that to drive in the run was just outstanding."

Linnie Malkin drew a lead-off walk and was replaced by pinch-runner Cally Kildow. Sam Torres then laid down a bunt that she beat out for a hit. Audrie LaValley followed with a successful sacrifice bunt to put runners at second and third with one out.

Hedgecock was then called on to pinch-hit with the go-ahead run at third. The sophomore from Valdosta, Ga., responded by hitting an 0-1 pitch into medium left field. Lindsey Garcia caught the fly ball, but had to spin before throwing the ball back to the infield. That was plenty of time for Kildow to score the go-ahead run.

Hedgecock had been relegated to more of a pinch-hitting role in SEC play with just one hit in six at-bats and one start going into Saturday's game. She said assistant coach Matt Meuchel told her to get ready before Malkin came to the plate to start the bottom of the sixth.

Hedgecock also got advice from other right-handed hitters who had already faced Auburn starter Maddie Penta (18-4). But it came down to just looking for a pitch to hit, she said.

"I wasn't really looking for anything specific," Hedgecock said. "I was just looking for a meat pitch and I just tried my hardest to be on time because she was throwing a little bit harder, just make contact really. I knew I just needed to get the ball into the outfield to score the run."

Deifel said Hedgecock locked in from the first pitch of the at-bat.

"You have no idea when you're name's going to get called or what the situation's going to be. It's the biggest situation of the game and for her to get it done, it's just huge for her and the team."

Redshirt junior Chenise Delce (7-2) finished off the win, pitching a scoreless top of the seventh despite allowing a one-out double. She struck out the last two hitters with the tying run on third base, including Packard, whose home run tied the game in the fifth.

It was her second win in the past two games in relief. Delce has now pitched a combined 6 1/3 scoreless innings, allowing 2 hits while striking out 11 and walking 3 against the Tigers.

Auburn took a quick lead as catcher Aubrie Lisenby doubled into the right-center field gap off Razorbacks starter Callie Turner, moved to third on a wild pitch and scored on a passed ball in the top of the first. But Arkansas responded in the bottom of the inning with Danielle Gibson's 14th home run of the season, a two-run shot to grab the lead.

Hannah Gammill's two-out RBI single in the third pushed the Razorbacks' lead to 3-1.

The Razorbacks, who are riding a five-game winning streak, will look to sweep the series today. First pitch is slated for 1 p.m.

A four-run third inning for the Bears was enough offense in the first game of a doublehader sweep at Farris Field in Conway.

In the second game, Jordan Johnson put together an 86-pitch, three-hit shutout, striking out 12.

Consecutive RBI singles by Engelkes and Kristen Whitehouse gave UCA a 2-0 lead and Morgan Nelson added a leadoff home run in the sixth.

The University of Arkansas at Pine Bluff got a two-run home run from Samaria Jackson in the third inning to help the Golden Lions pull away and win the second game of Saturday's doubleheader with Alcorn State (15-24, 8-7 Southwestern Athletic Conference) at Pine Bluff after losing the opener.

Alcorn State dominated the opener behind a two-hitter by Kiri Parkers. The Braves also got a two-run home run from Kristian Edwards in the second inning.

Zharia Richardson and Jackson had both of UAPB's hits in the game.