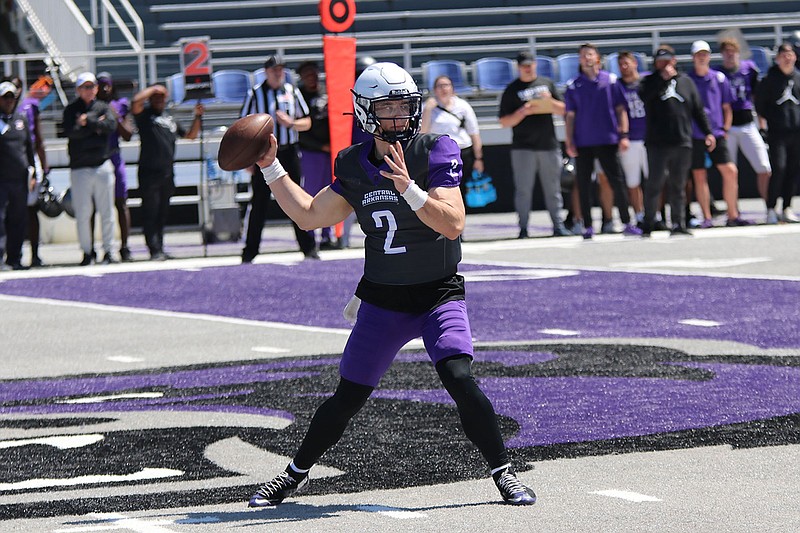 CONWAY -- Will McElvain moved to his left, spotting John David White breaking away from his defender in the slot.

The 5-11 transfer quarterback flicked one toward the back of the end zone, and White, a University of Arkansas transfer and former Pulaski Academy star, hauled it in for the score.

"Easy money," called someone from the sideline.

McElvain made almost everything look straightforward Saturday afternoon during the University of Central Arkansas' spring game at Estes Stadium, leading three touchdown drives and setting up field goals on his other two.

The Bears scrimmaged for nearly two hour, pitting the offense in white against the defense in purple as UCA rotated through its five quarterbacks.

With multi-year starter Breylin Smith now graduated, the Bears remain in the process of trying to find their next starting quarterback, with McElvain seemingly the favorite but Cabot native Tyler Gee and junior college transfer Clifton McDowell also in the mix.

"Will McElvain had a great spring, learning a new system but he's got a ton of experience," Bears Coach Nathan Brown said. "The ability he showed at the University of Northern Iowa being a freshman All-American in 2019 and making 15, 16 starts in the Missouri Valley Conference, you knew he was going to be special."

McElvain handed off to Dumas native Kylin James for a 12-yard score on the opening series Sturday and looked comfortable in the pocket throughout, hitting multiple receivers -- a group that was without both Christian Richmond and Jarrod Barnes.

Although McElvain has only been with UCA for three months, he said he's had no issue picking up the playbook. He said going through three different offensive coordinators in three seasons at Northern Iowa was "kind of a blessing in disguise."

"Everybody welcomed me in," McElvain said. "[Brown and offensive coordinator Ken Collums] were a big part of the reason I came here because of how much they know about the [quarterback] position, so I'm just fortunate."

Things got pretty sluggish during the middle of the scrimmage, with Brown calling out his offense after a string of three straight three-and-out possessions.

The Bears heeded their head coach's challenge over the final 50 minutes. Gee followed McElvain's deep score with a 40-plus yard pass to Colorado transfer Trustin Oliver down the sideline and Myles Kitt-Denton turned a simple crossing route into a 41-yard catch-and-run touchdown.

Brown said holding out returners Richmond and Barnes was with the intention of giving more reps to newcomers and younger players at wide receiver.

They'll all be needed come the fall as UCA tries to replace Lujuan Winningham, who declared for the 2022 NFL Draft, and All-American Tyler Hudson, who transferred to Louisville.

"Those guys made the difficult plays look very rhythmic," Brown said of his departed wideouts. "I anticipate a lot of plays being made with our feet at times with our quarterbacks keeping plays alive because of our athletic ability back there."

Other than a few conditioning sessions over the coming weeks, it'll be the last time UCA is together as a full team until the Bears reconvene in June.

"I want to see guys be self-motivated," Brown said. "I want to see the guys that are going to lead when the lights aren't on and the crowds are not out here. I think that's going to be big over the next three or four months."