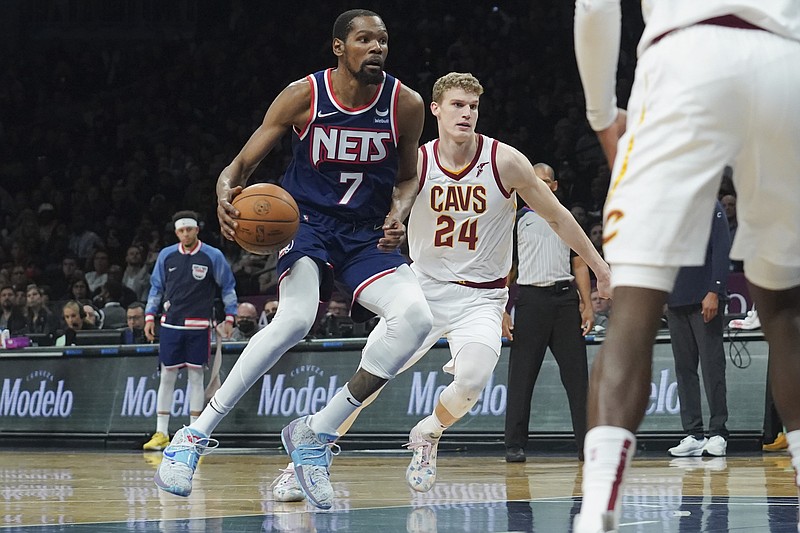 Brooklyn Nets forward Kevin Durant (7) drives to the basket against the Cleveland Cavaliers during the second half of an NBA basketball game Friday April 8, 2022, in New York. (AP Photo/Bebeto Matthews)

NEW YORK -- Kevin Durant and Kyrie Irving have played in the NBA Finals and Olympics, so they've been in just about every kind of big game there is.

The play-in tournament is something new for them, and the Brooklyn Nets certainly didn't expect to experience it this year.

The Cleveland Cavaliers weren't sure they would, either, after losing 50 games last season. Now one of the teams will extend its season into the playoffs by winning the opener of the tournament tonight in Brooklyn.

Both finished 44-38, with the Nets taking seventh place by going 3-1 against the Cavaliers. They wrapped up the tiebreaker Friday by beating Cleveland 118-107, though that did nothing to make the Cavs think they can't go to Brooklyn and win five nights later.

"We believe we can beat anybody in this league," Coach J.B. Bickerstaff said. "We just have to play our best basketball. We know what we're facing."

They're facing a team that was expected to be at the top of the Eastern Conference, not one still trying to play its way into the postseason. But Irving couldn't play home games until late last month because he isn't vaccinated against the coronavirus. Durant missed 21 games with a sprained left knee. James Harden was traded for Ben Simmons, who hasn't played because of back problems.

"For us, we know that we could come up with every excuse in the world of what happened this season," Irving said. "So many different things transpired, ups and downs, and now we're finally here and we're able to perform with one another for the first time in a high-intense environment such as the playoffs."

He made the biggest shot in Cavaliers history, completing their comeback from 3-1 down in the 2016 NBA Finals. Durant was MVP of the next two NBA Finals and has three Olympic gold medals. Both have been MVPs of the world basketball championship and said this game will feel like one late in a playoff series.

"Game 7s, Olympics, just go play," Durant said. "I mean, can't put too much pressure on yourself. We understand how important the game is already, so the best thing to do is just play free and stick to the game plan and trust in your teammates, and I think that's usually how you try to approach these games, and we'll see what happens."

The winner earns the No. 7 seed and faces No. 2 Boston in a first-round series beginning Sunday. The loser gets a second chance to get in as No. 8, hosting the winner of the Atlanta-Charlotte matchup Friday for the right to play top-seeded Miami.

The Cavaliers appeared easily headed to the postseason before stumbling down the stretch after the loss of All-Star center Jarrett Allen to a broken finger. He's not expected to return to face his former team, but the Cavaliers already knew they have to play tough, with or without him.

"J.B. likes to say win the scrap and all our battles are won in the trenches. That's what it's going to have to be [tonight]," forward Kevin Love said. "We have that familiarity with them and we know what they're capable of, especially with their two superstars that they have."

Allen hasn't played since getting hurt March 6, and the Cavs haven't been the same without him. They went 3-8 in their last 11 games and had no answer underneath Friday for Nets center Andre Drummond, who had 15 points and 12 rebounds.

"He's obviously the anchor of the defense and the things he can do offensively and help the other guys," Lauri Markkanen said. "And I think it's obvious that we miss him a lot."

Durant and Irving were asked what they thought of the play-in, which in its first season of the current format had the Lakers beat Golden State in last year's opening round.

"Well No. 1, I think somebody's in the back room hip-hip-hooraying, whoever created the play-in tournament, because last year you get Steph and LeBron," Irving said. "This year you get me and KD going against the Cavs in the play-in game and then you have, in the Western Conference, Minnesota and the Clippers." 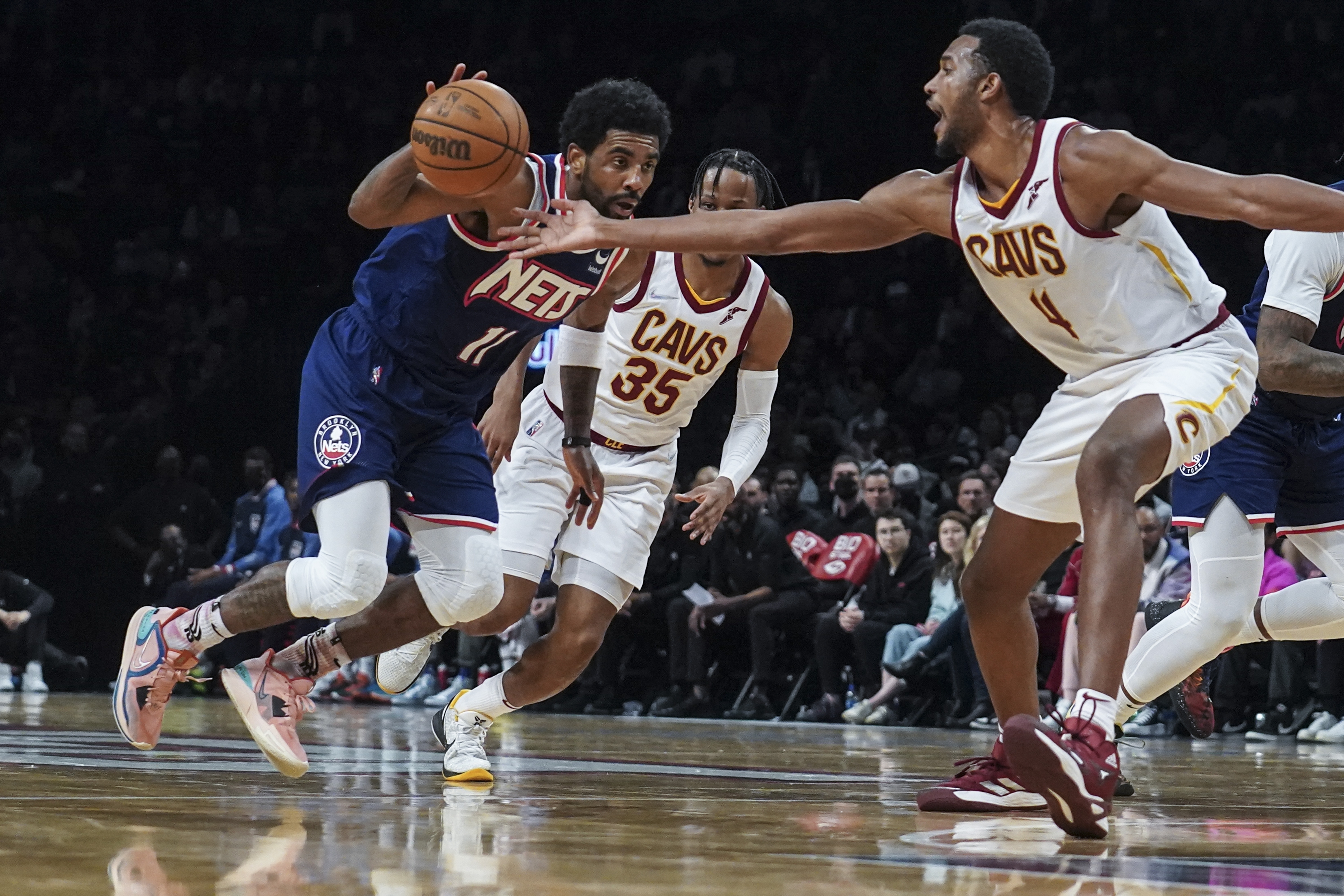 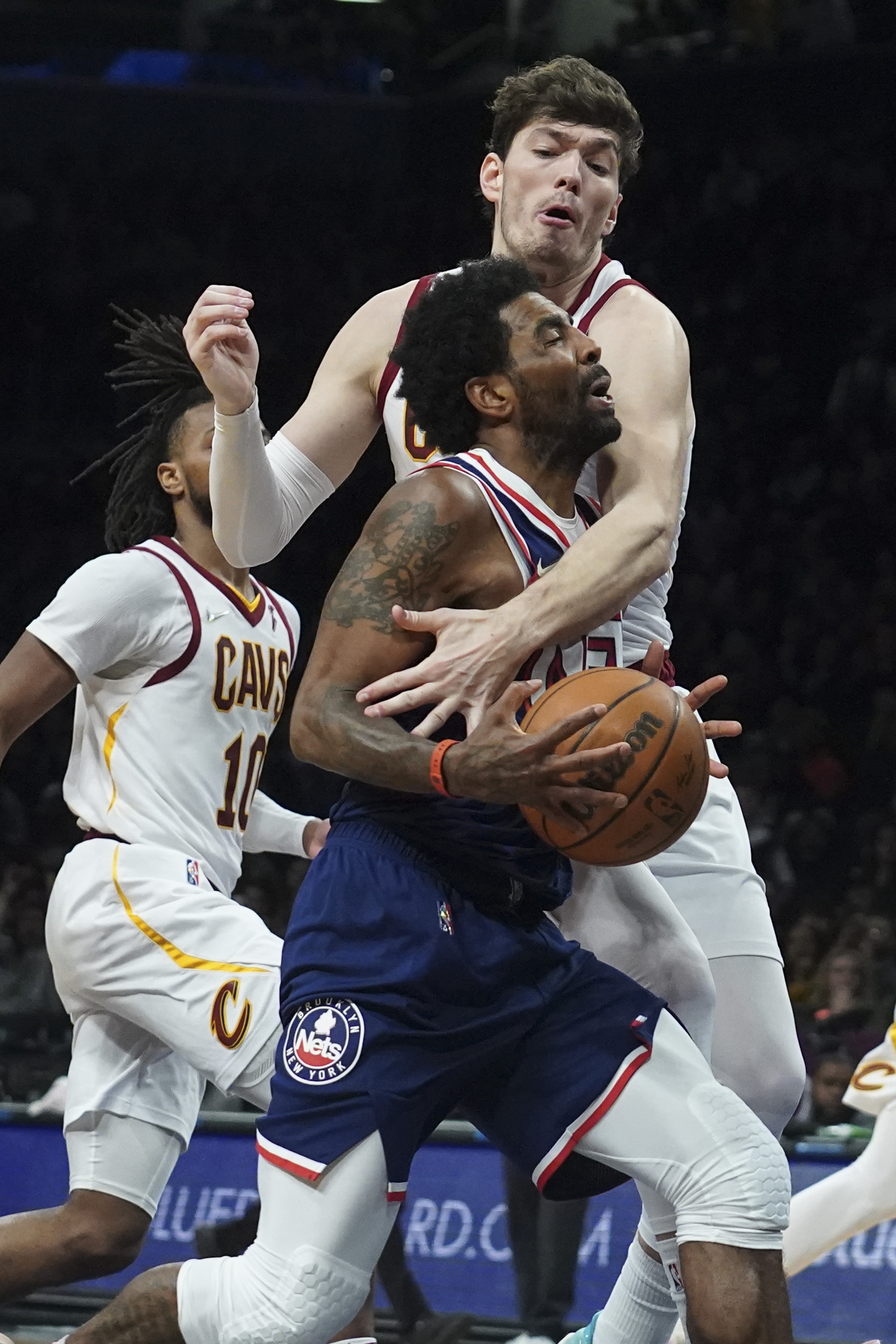 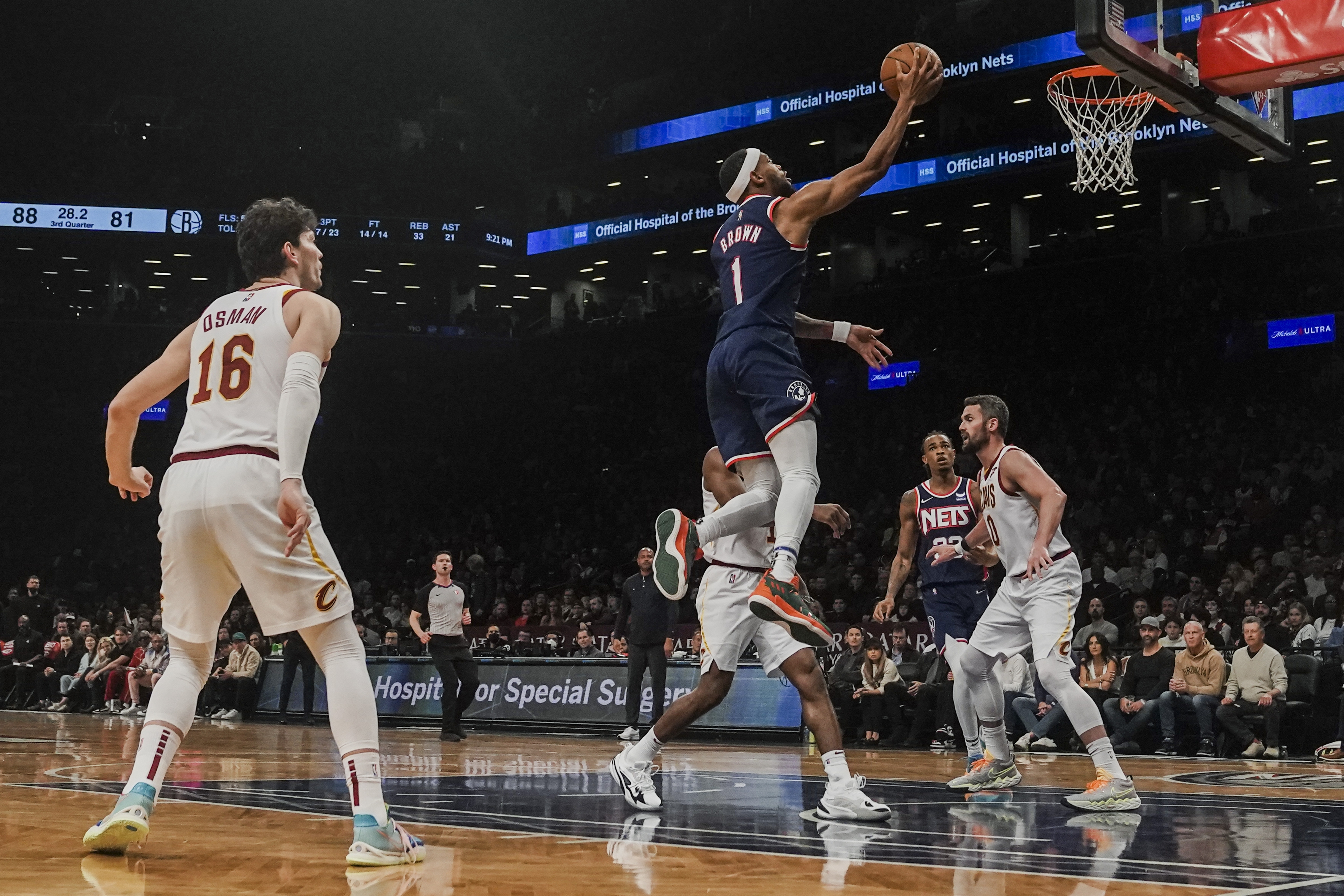 Brooklyn Nets forward Bruce Brown (1) drives to the basket during the second half of an NBA basketball game against the Cleveland Cavaliers Friday April 8, 2022, in New York. (AP Photo/Bebeto Matthews) 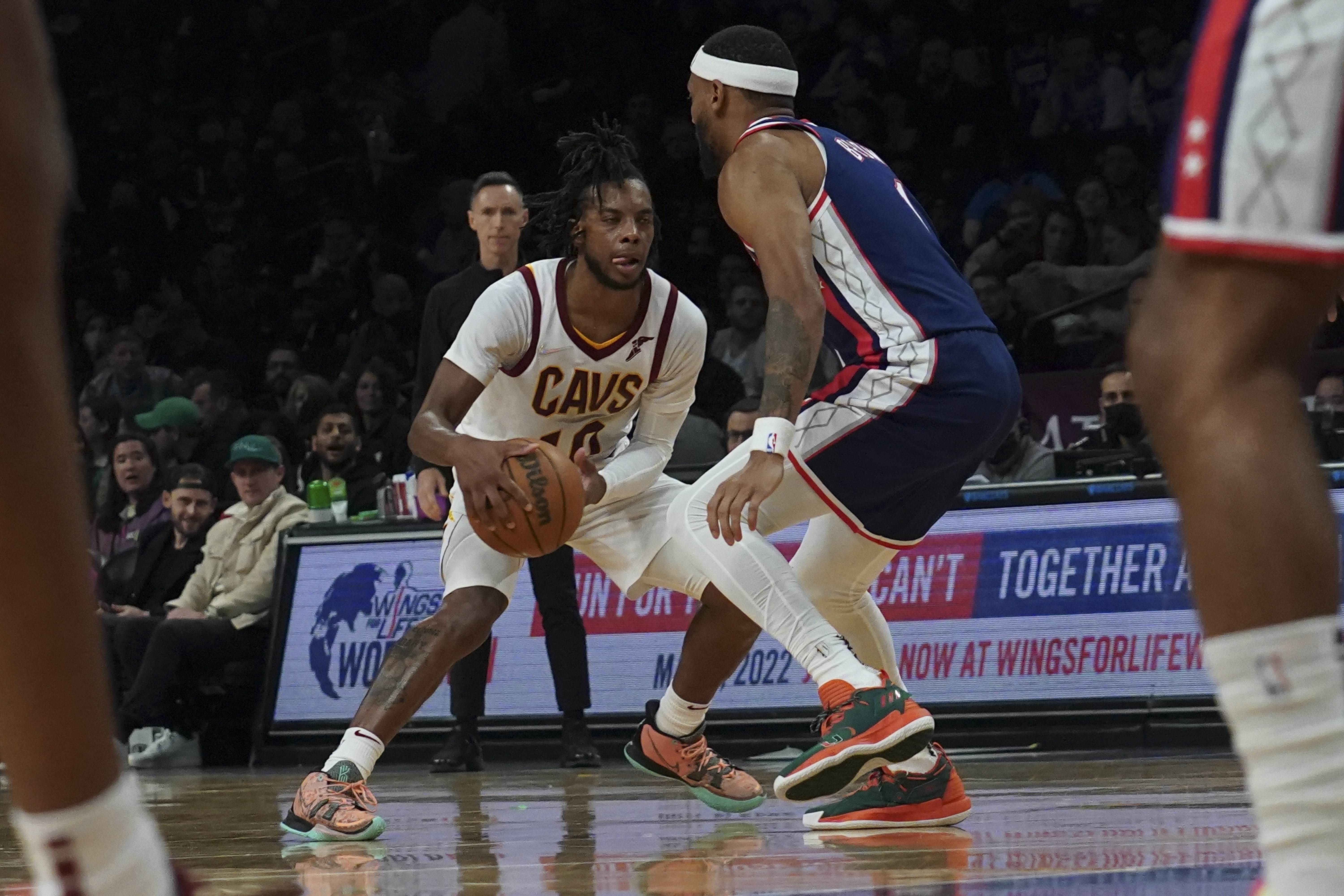