TELEVISION: Shows to watch, try or avoid based on trailers 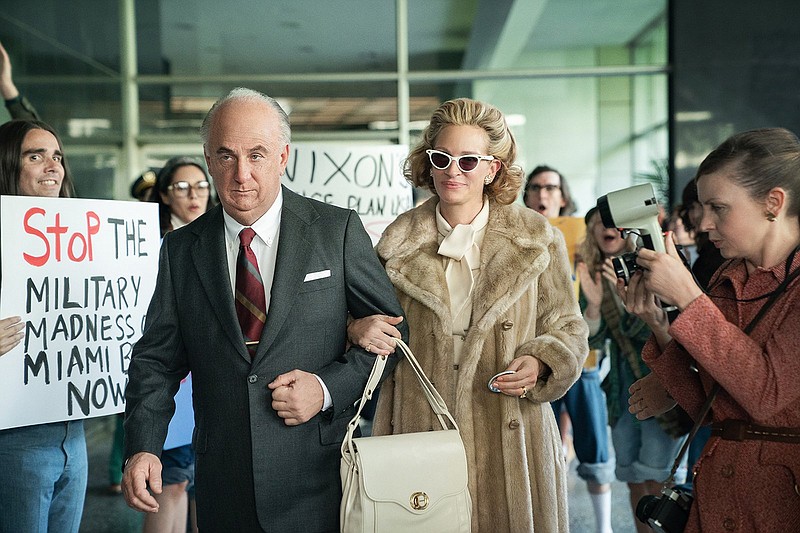 Here are the buzziest new TV shows of the season to watch, try or avoid — based solely on trailers and descriptions (no spoilers here).

It's hard to pass up this one: Viola Davis as Michelle Obama, Michelle Pfeiffer as Betty Ford and Gillian Anderson as Eleanor Roosevelt. The Showtime anthology series seems interested in exploring the first ladies outside of their husbands (O-T Fagbenle, Aaron Eckhart and Kiefer Sutherland, respectively), including Roosevelt's suspiciously close friendship with reporter Lorena Hickock (Lily Rabe).

Cashing in on the podcast-to-TV-series pipeline is "Gaslit," based on the first season of Slate's "Slow Burn" series and starring Julia Roberts and Sean Penn. Rather than the Watergate story we all know, "Gaslit" goes behind the scenes with whistleblower Martha Mitchell, wife of Attorney General John Mitchell, and shows how Richard Nixon's world crumbled around him.

"The Wire" creator David Simon brings the true story of the Baltimore Police Department's Gun Trace Task Force to the small screen. Simon also appears to have brought back many of the lesser-known "Wire" cast.

"Under the Banner of Heaven," April 28, Hulu

Andrew Garfield plays a Mormon detective whose faith is shaken as he investigates the 1984 murder of Brenda Wright Lafferty (Daisy Edgar-Jones) and her baby daughter in a Salt Lake City suburb. Garfield, Super Sleuth, is intriguing enough, but now we've got religion?

The "faking cancer to get a job" angle has been done, but there is just something so undeniably charming about Vanessa Bayer that you can't even be mad at her, playing a desperate woman who dreams of hosting a show on a shopping channel to the point of pretending her childhood cancer is back.

"Based on disturbingly true events" could lead the trailer for any number of true crime series, but "Candy" seems to promise something more from suburban housewife Candy Montgomery (Jessica Biel) accused and then acquitted of the bloody murder of church friend Betty Gore (Melanie Lynskey) by hitting her 41 times with an ax.

It's difficult to explain mysterious blond billboard model Angelyne, who was as well known as she was little understood around Los Angeles in the '80s. Was she a singer? An actress? An alien? Star Emmy Rossum is going to find out, in all her pink glory.

The great thing about anthologies is that, theoretically, there's always going to be something that catches your attention. The bad thing is that sometimes they get rushed or lazy; you only have 45 minutes with these characters, you don't have to put that much work in. With "Roar," the creators of "GLOW" have promised us "darkly comedic feminist fables."

"Anatomy of a Scandal," Friday, Netflix

In a post-#MeToo world, stories about powerful men denying rape allegations feels overdone. On the other hand, done well, a show about a British politician, his alleged victim, his wife and the prosecutor determined to take him down could be a fascinating study of the consequences of the elite.

Time-travel shows are almost impossible to pull off, but when they work, they can be magnetic. Elisabeth Moss as a newspaper archivist in early 1990s Chicago who finds herself linked to a serial killer through her own assault could be the definition of an unreliable narrator and with Moss, it could work.

Early descriptions of "Now and Then" sound an awful lot like "Yellowjackets" meets "The Afterparty," minus the implied cannibalism: 20 years after a group of six college best friends celebrate a weekend that ended with one of them dead, they find themselves faced once again with their own actions. We've been there, done that.

"The Man Who Fell to Earth," April 24, Showtime

This is no offense to Chiwetel Ejiofor, but when you've already had David Bowie playing your alien who crashes onto your planet, you should probably just let that be.

Sure, "The Offer" has a great cast and promises the behind-the-scenes story of the making of "The Godfather," one of the most important movies in cinematic history, but weren't all those Oscars enough?

Print Headline: TV shows to watch, try or avoid based on trailers