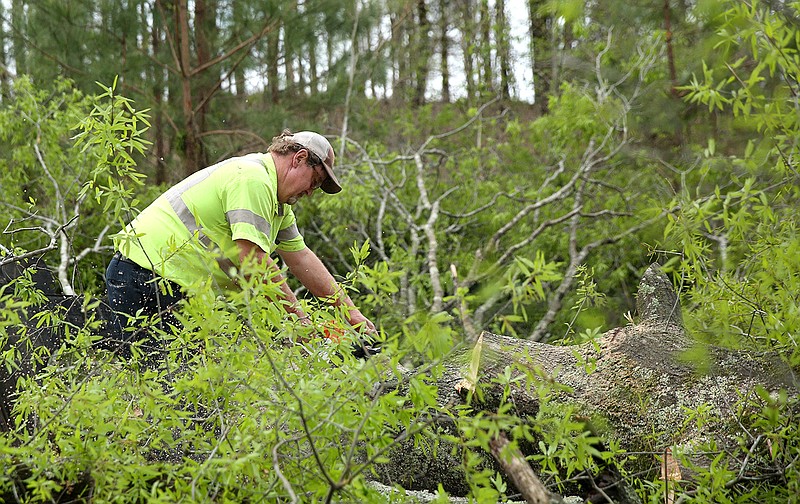 Tracy Neal, with the Faulkner County Road Department, uses a chainsaw to remove debris from Adams Lake Rd. near Conway on Tuesday, April 12, 2022 after a severe storm system moved through the area. (Arkansas Democrat-Gazette/Colin Murphey)

A tornado near Bloomer in Sebastian County tracked for about a mile, he said. Another near Charleston in Franklin County tracked about 2½ miles. It was unclear how far a third near Scranton tracked and a fourth between Cato and Little Rock Air Force Base in Faulkner County.

All of the tornadoes caused minimal damage to homes and barns, Lewis said.

An EF-1 tornado is the second-weakest tornado on the Enhanced Fujita Scale. Winds for an EF-0 and EF-1 reach between 65 mph to 110 mph.

Investigators were unable to reach all of the path for the tornado in Faulkner County because of trees down, Lewis said.

Logan County Sheriff Jason W. Massey said there was damage to barns, homes and trees along the tornadoes' path near Scranton. He said the damage appears to follow a straight line.

Massey said all three of the storms moved through different parts of the county, which caused some intense moments for officials.

"It was a dramatic moment," Massey said. "We definitely feel we got out much better than we were anticipating. That we know of, there was no one injured."

Even those stationed at National Weather Service headquarters in North Little Rock had to break for a moment to be certain they were safe.

"We knew it was close, but not really close enough to shelter," Lewis said.

Lewis said his team made a call to Memphis to put them on standby to take over for the Little Rock office if the storm moved closer.

"We never fully turned it over to Memphis," Lewis said.

Lewis said he remembers only a handful of times during his career at the North Little Rock office that forecasters have needed to take shelter. He's worked at the office since 1994.

"The time that I remember the most was in 2008," Lewis said. "We had a storm come in through the southwest. It was producing tornadoes occasionally, and two forecasters came in from outside and their eyes were great big."

Lewis said about that time those in the office could hear a roar in the background and the walls started shaking. Memphis was called, and the staff took shelter in a safe room in the building.

Faulkner County officials also were thankful the storm didn't cause extensive damage, despite radar picking up a large amount of velocity over the county between Mayflower and Cato as the storm passed.

County Judge Jim Baker said he couldn't find any signs of a tornado from the damage he surveyed. He said winds and hail caused minor damage for residents.

Baker said at least one vehicle was totaled by the hail that reached golf ball sizes in the county.

Lewis said hail had the most significant impact Monday, with some areas reporting up to softball-sized hail.

Even some flash flooding throughout the state could have been caused by the hail, Lewis said. He said hail could have clogged drainage systems.

Bobby M. Kelly III, a spokesman for Conway, said the city saw flash flooding in areas like downtown, which often has trouble with flooding. Flooding south of the city was a little more unusual, he said.

"Some parts of the city saw a 50- to 100-year amount of rainfall in about 20 minutes," Kelly said. "It simply overloaded our capacity to move water.

"I don't know if there is a way we could engineer our way out of that."

Kelly said it's possible that the hail caused problems for drainage.

The city was going to try to combat water getting into businesses downtown by closing off certain streets Tuesday night, in anticipation of more rainfall today. He said the wake from vehicles driving through downtown can cause more issues for business owners.

City officials are working on long-term solutions to combat downtown flooding, Kelly said, but it won't be completely changed overnight.

While the state was likely to see more storms Tuesday night in central and southeastern portions of the state, the storms weren't expected to cause as much disruption as Monday, Lewis said.

Storms forecast for late morning and early afternoon today could be more concerning. Lewis said today's weather has the potential to be more intense than what was seen Monday or Tuesday.

"The storm system that has been causing all of this [weather] will finally be moving through [today]," Lewis said. 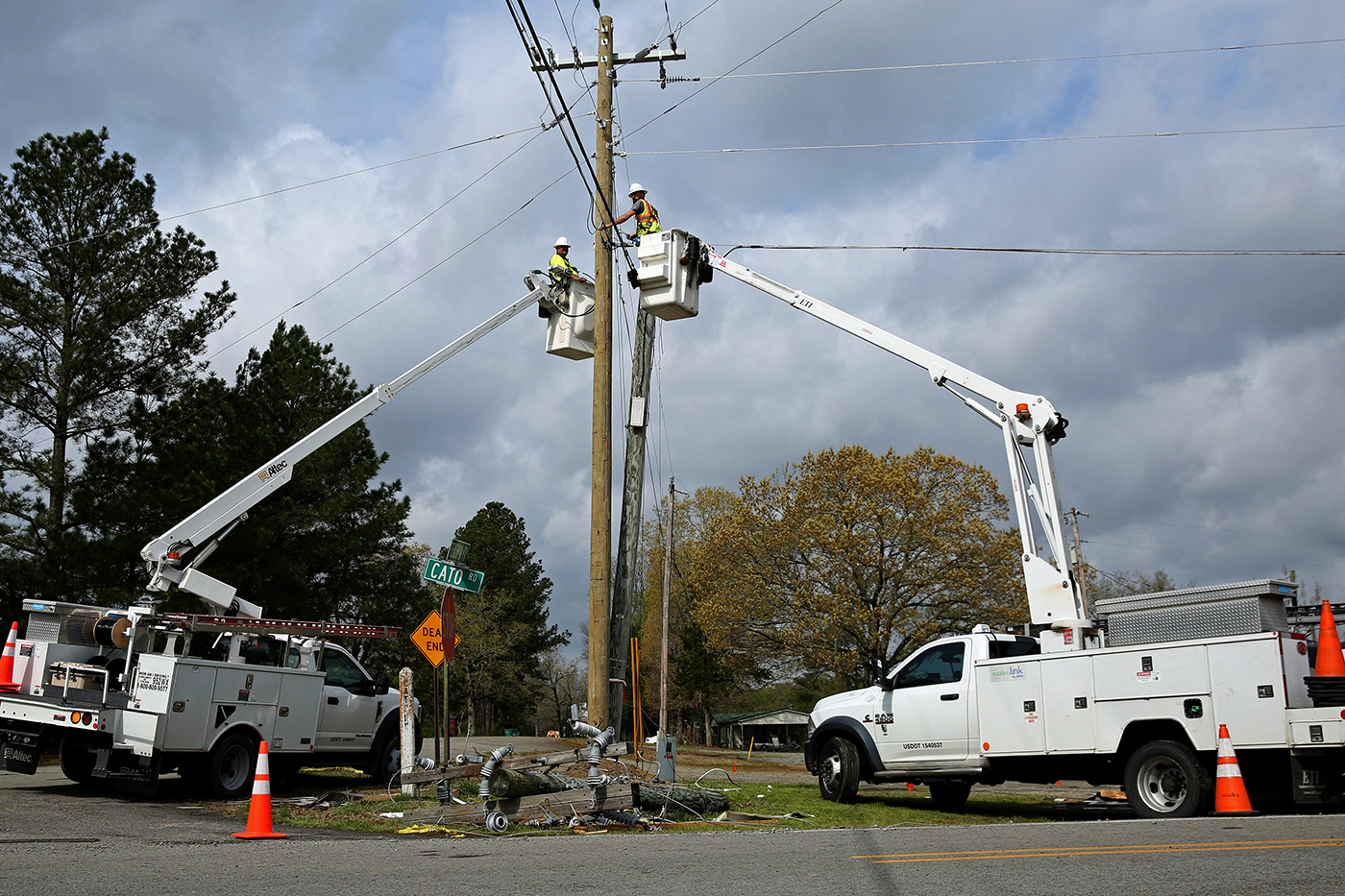