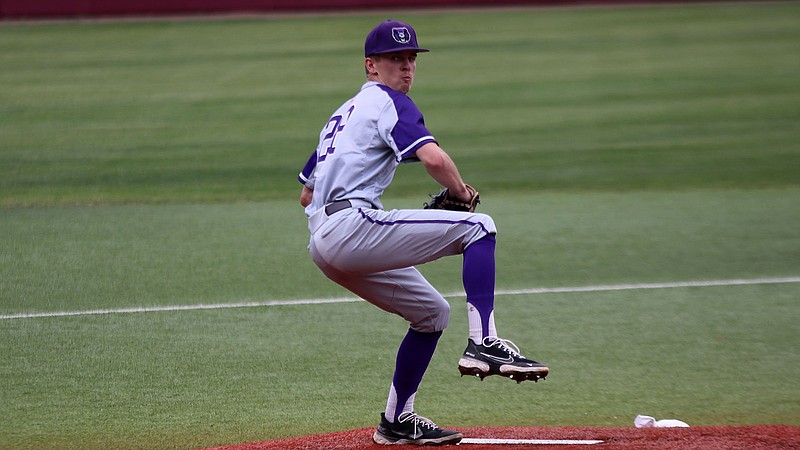 The right-field corner at Gary Hogan Field is well known to its denizens. At a mere 305 feet down the line, it's a haven for left-handed hitters, and with a pair of southpaw sluggers in the heart of its order, the University of Arkansas-Little Rock often takes advantage.

Tuesday afternoon, though, it was a left-handed hitting Bear who capitalized on the short perch for his first home run in three years.

Central Arkansas poured it on with a six-run eighth inning in Little Rock, burying the Trojans for an 11-5 victory that clinched the season series for the Bears. Farmington native Drew Sturgeon went 3-for-5 with 5 RBI to power the UCA offense, including a two-run homer that capped the visitors' late outburst.

"Things are going great for us as a team," Sturgeon said. "It's good to finally break the ice with a first home run for UCA. ... I've been hitting a lot of fly balls to the warning track, so it was finally my time."

Although Sturgeon and the Bears' bats provided some necessary insurance after UALR (16-13) had clawed to within 5-4, UCA found itself in control early thanks to starter Jack Haley.

The Sherwood native and Sylvan Hills alumnus had logged 14 2/3 innings over 10 appearances this year prior to Tuesday, but Bears Coach Nick Harlan gave Haley his first career start just a few miles from home.

"He made big pitches when he needed to, and that was a credit to his mindset," Harlan said of Haley. "He was in a good head space and was able to sustain it. I think when a pitcher is confident and he's in control of himself, he's going to perform at a higher level."

After the Trojans scratched across the game's first run in the bottom of the second, UCA (14-17) posted crooked numbers in both the third and fourth innings.

Sturgeon lashed a double the other way, hitting the wall in right center to clear the bases with two outs in the third to put the Bears up 3-1. UCA then made UALR's bullpen pay again, as Hunter Hicks sent a double to nearly the same spot, scoring both R.J. Pearson and Kolby Johnson, who'd reached on walks.

The Trojans pulled one back in the home half of the fourth, as center fielder Tyler Williams lined a home run over the wall in straightaway center, cutting the Bears' lead to 5-2.

Although Williams had just the one hit, he walked twice and scored three of UALR's five runs, extending his on-base streak to seven games and pushing his average to .304.

"Tyler works extremely hard on his craft. He's very hard on himself," Trojans Coach Chris Curry said. "You're starting to see some of the results of his hard work pay off. ... And boy, if he's a guy that can really get hot there -- along with the other hitters we have -- we'll be in good shape."

Harlan let Haley roll into the seventh, but after Williams walked to lead off the inning, UCA turned to its bullpen. UALR designated hitter Jack Stroth didn't wait to see more than a single pitch, launching one over the wall in left to make it 5-4 Bears.

That was as close as the hosts would get.

With the win, UCA heads to Eastern Kentucky as winners of three straight and five of eight in April, and the Bears will have a chance to grab sole possession of first place in the ASUN West.

UCA has won all four of its conference series, yet has dropped its last four midweek games, dating to March 9 when the Bears edged the Trojans at home.

Harlan was pleased to see his group finally carry things over.

"It's easy to look past Tuesdays," the UCA coach said. "They're very mature. ... Every one of them was well-prepared for the moment and it showed up."