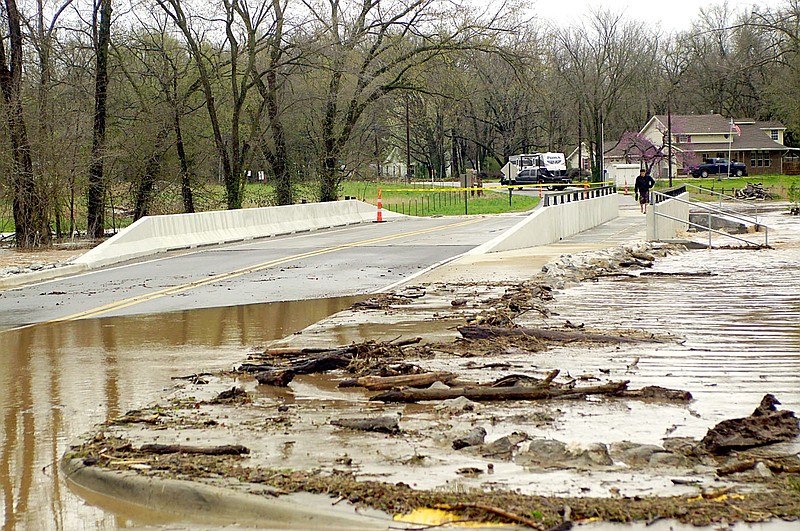 Westside Eagle Observer/RANDY MOLL Heavy rains on the morning of April 13 caused Flint Creek to overflow its banks and close the new bridge on Dawn Hill East Road in Gentry temporarily, with water running over the bridge aprons on both sides of the creek.

The Highfill Fire Department responded to a water rescue near Arkansas 264 and Bryant Place at 10 a.m., according to a news release from Benton County. Two occupants were rescued with no injuries reported.

Today's forecast is sunny with a high near 65, but rain could return to the area this weekend, according to the weather service.

Elsewhere in the state, one woman died Wednesday when a tree fell onto a mobile home in Cleveland County. High winds and flash flooding damaged property across central and southeastern parts of the state.

Nearly all of the tree damage was caused by straight line winds or ground saturation, with the exception of a possible funnel spotted in Mississippi County late afternoon, according to the National Weather Service in North Little Rock. Another possible funnel was spotted near West Memphis, but little to no damage had been reported in the area by late evening, the weather service said.

Cleveland County Emergency Manager Stephen McClellan said the Cleveland County Sheriff's Office received a report at approximately 4:40 p.m. of a victim trapped by a tree in the 300 Block of E. 6th St. in Rison.

Personnel from the Sheriff's Office, the Office of Emergency Management, the Rison Fire Department and an ambulance responded to the scene and found find the victim, a 20-year-old woman, dead.

McClellan said the woman had been married a month to the day.

McClellan said the wind had already started to slow by the time the tree fell. He said it's possible the ground was so saturated by that point that the wind caused the tree to fall.

There were reports of numerous trees down in Cleveland County after storms rolled through south-central Arkansas, McClellan said. He said the county's road department was working on clearing trees that were blocking roadways.

Fallen trees also caused damage in other parts of the state, including the Little Rock area, which saw straight line winds that reached up to 70 miles per hour, according to National Weather Service officials.

No animals or people were injured during the storm, Altrui said.

"That is the great thing about our staff. They are very quick to react," Altrui said. "We actually prepare and do weather drills like this. We are are fortunate we didn't have any animals or humans harmed."

The zoo sent out a release Wednesday with a photo of staff waiting out the storm indoors with penguins running around an enclosure.

A restroom across from the zoo's tiger habitat received significant damage, Altrui said. A covering on the amphitheater also was destroyed, and the reptile house had a hole in it from a tree that fell.

Most the damage to buildings and fencing were in general service areas and did not damage any animal habitats, she said. Altrui said staff will need some time to clear the trees, including some that are crossing walkways.

The fallen trees will be cut up and used to enrich animal habitats at the zoo, Altrui said.

"Our bears will get some new furniture in their habitat," she said. "They will have some new things to play with."

Another Arkansas attraction also was damaged when the storm struck a house in Crittendon County that was used in the 2003 John Grisham movie, A Painted House, according to tweet from the Arkansas Department of Emergency Management.

The social media post showed photos of the house with portions of the tin roof pealed back. The house was moved to Lepanto by a local family and used as a museum.

According to the CALS Encyclopedia of Arkansas, the house was made for the film to use as a prop.

There also were reports of a business damaged in Osceola in Mississippi County, according to emergency manager Wayne Reynolds. He said two schools no longer in use were damaged in Etowah and Dyess.

The National Weather Service confirmed four EF-1 tornadoes touched down Monday in Sebastian, Franklin, Logan and Faulkner counties, causing minor damage in each of the counties.

In some places, hail that reached the size of golf balls and softballs caused more significant damage.

County Judge Jim Baker said Wednesday it appeared more than a 100 vehicles in Faulkner County had been damaged by hail during Monday's storm.