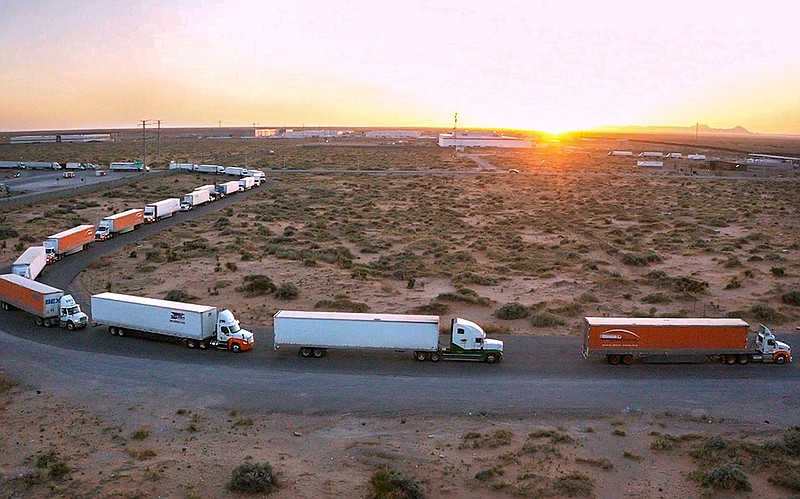 Truckers block the entrance to the Santa Teresa Port of Entry near Ciudad Juarez, Chihuahua, on Tuesday. The truckers’ protest at the border with New Mexico is one of several after Texas Gov. Greg Abbott ordered extra inspections by state troopers. “If you want relief from the clogged border, you need to call President Biden,” Abbott said Wednesday. (AP/The El Paso Times/Omar Ornelas)

Texas Gov. Greg Abbott doubled down Wednesday on his commitment to "enhanced" inspections at Texas-Mexico border crossings despite international economic and political pressure to end the policy that has gridlocked commercial traffic, backing up cargo for miles into Mexico and spoiling produce shipments.

Abbott pledged to lift the extra inspections only when Mexico leaders come forward with plans to secure their side of the border.

In what he called a "historic" agreement, Abbott inked a deal with the governor of Nuevo Leon to resume normal inspections, so long as the Mexican state beefs up checkpoints and patrols along its 12-mile stretch of the border.

"Clogged bridges can end only through the type of collaboration that we are demonstrating today between Texas and Nuevo Leon," said Abbott, who sat beside Nuevo Leon Gov. Samuel Alejandro Garcia Sepulveda at a news conference in Laredo.

The most dramatic backups of commercial trucks along Texas' 1,200-mile border have occurred at other bridges that do not share a border with Nuevo Leon. That includes the Pharr-Reynosa International Bridge, which has been effectively closed since Monday by trucker protests.

"If you want relief from the clogged border, you need to call President Biden," Abbott said Wednesday.

Abbott and Garcia announced that at the one bridge between their states, Texas troopers would resume normal random inspections. Calling it a "historic" agreement, Abbott said he and Garcia had agreed that since Nuevo Leon had agreed to create a new security checkpoint within Mexico to check commercial traffic, old operations could resume on the U.S. side.

Until President Joe Biden ramps up border efforts, Abbott said Texas will continue to use "its own strategies to secure the border and continue to negotiate with Mexico to seek solutions."

The delays have raised concerns that a U.S. economy already experiencing inflation and supply shortages could face an entirely new set of problems, potentially driving up prices on certain products and making other items even more scare.

"This isn't a regional issue, or that the city of Laredo is not getting their produce at grocery stores," said John Esparza, president of the Texas Trucking Association. "We are seeing delays that will be felt across the country. There are a half a dozen divisions of trucking [affected]. There's the refrigerated segment of trucking, there's household goods, forestry, fuel tankers, commodities for trade goods -- this is about General Motors, Ford and everything coming out of Mexico, our trade partner."

Strawberries, asparagus, avocados, tomatoes and other spring favorites are sitting in lines of refrigerated trucks many miles long as growers and shippers scramble to reroute and grocers hustle to find products from elsewhere to avoid empty shelves in the run-up to the Easter and Passover holidays.

The backup at the border is causing losses of millions of dollars a day for employers and employees, who have been idled, said Lance Jungmeyer, president of the Fresh Produce Association of the Americas.

It also means transportation shortages are increasing as available trucks are stuck waiting in line to cross the border, all of which will continue to drive up the price of produce at American grocery stores.

"These trucks are already inspected by Customs and Border Protection -- scanned and X-rayed and drug-dog sniffed," Jungmeyer said. "These new inspections are redundant. At numerous ports of entry -- Laredo, Pharr, Eagle Pass and others -- Mexican drivers are starting to protest."

Abbott ordered the increased safety inspections April 6 as an expansion of his Operation Lone Star border security effort. The state has spent billions of dollars on the operation, which includes calling up 10,000 Texas National Guard soldiers and sending them to the border along with state troopers.

The Republican governor unveiled the inspection plan in response to the Biden administration's decision to end the public health order known as Title 42, which has been used to quickly expel migrants at the U.S.-Mexico border.

But the stepped-up safety inspections -- which are in addition to other inspections by the federal authorities -- have increased wait times at the border. U.S. Customs and Border Protection says wait times for commercial crossings are now as long as 12 hours, while some truckers interviewed at the crossings say they have had to wait two and three days to cross.

"Governor Abbott's unnecessary and redundant inspections of trucks transiting ports of entry between Texas and Mexico are causing significant disruptions to the food and automobile supply chains, delaying manufacturing, impacting jobs, and raising prices for families in Texas and across the country," White House press secretary Jen Psaki said Wednesday in a statement.

"The continuous flow of legitimate trade and travel and [Customs and Border Protection's] ability to do its job should not be obstructed. Governor Abbott's actions are impacting people's jobs, and the livelihoods of hardworking American families," the statement said.

The governors of Coahuila and Tamaulipas issued a joint statement to Abbott Tuesday night that in part read: "The new inspections measures are creating havoc and economic pain on both sides of the border, and as a this Quad-State region suffers, so is Texas and vice-versa. Unfortunately, political points have never been a good recipe to address common challenges or threats." The letter was signed by Tamaulipas Gov. Francisco Javier Cabeza de Vaca and Coahuila Gov. Miguel Angel Riguelme Solis, imploring Abbott to "reconsider these overzealous inspections."

In Reynosa alone, the city across the border from Pharr, Texas, long inspections affected 70% of the foreign-owned factories in Mexico with losses of more than $122.9 million, said Aldo Hernandez Jacquez, spokesman for the state of Tamaulipas.

Abbott, up for reelection, ordered the additional safety inspections after declaring that the Biden administration had failed the country when it comes to border safety. He has said Department of Public Safety workers inspecting the commercial vehicles would disrupt efforts to smuggle people and drugs across the border.

The Department of Public Safety said Wednesday that the agency inspected 4,133 commercial vehicles between the start of the stepped up inspections and the end of Tuesday. It said 973 vehicles "were placed out of service for serious safety violations to include defective brakes, defective tires and defective lighting. Additionally, 84 commercial vehicle drivers were placed out of service."

The agency said a total of 13,651 violations had been found. But the agency did not respond to questions about the discovery of smuggled migrants or drugs.

The disruptions to normal business along the border have raised the ire of both Republican and Democrats alike in political and business circles. On Tuesday, Texas Agriculture Commissioner Sid Miller became the most prominent state official to call for an end to the inspection policy, saying it was "turning a crisis into a catastrophe."

Early Wednesday, Customs and Border Protection said commercial traffic at Pharr International Bridge, Anzalduas Bridge and Progreso Bridge had come to a complete halt in both directions because of protests by truckers on the Mexican side of the border "and due to no southbound movement by U.S. carriers."

Some traffic was seen moving again by midday at the Anzalduas bridge. Other trucks were being diverted to other crossings, but the trucker protests had spread as far as the crossings in Santa Teresa, N.M., as of late Tuesday, blocking traffic there.

Information for this article was contributed by Alfredo Corchado, Allie Morris and Dianne Solis of The Dallas Morning News (TNS), Paul J. Weber of The Associated Press and Laura Reiley of The Washington Post. 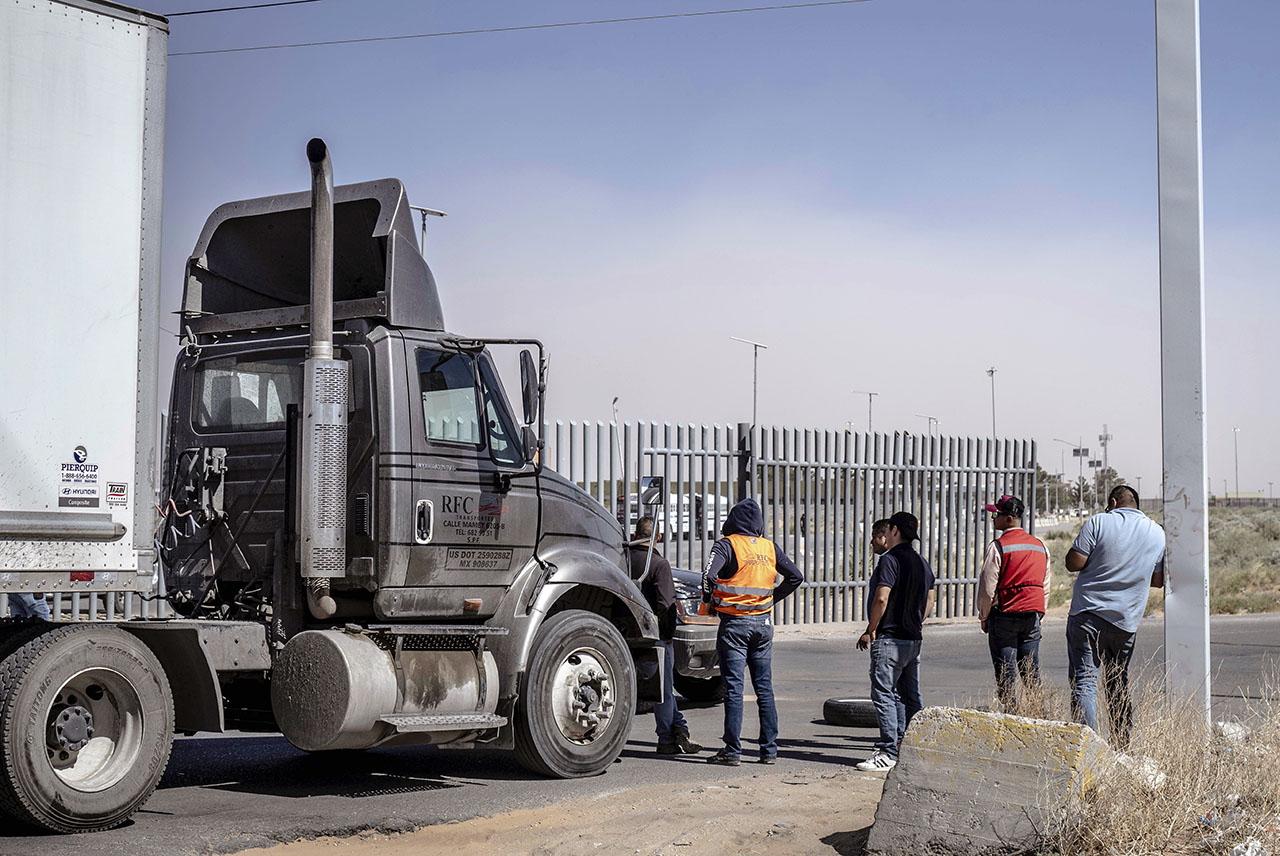 Truckers block the entry to the Santa Teresa Port of Entry leading into New Mexico on Tuesday. Such protests are misguided since New Mexico has nothing to do with Texas’ inspection policies, said Jerry Pacheco, executive director of the International Business Accelerator and president of the Border Industrial Association. (AP/The Albuquerque Journal/Roberto E. Rosales)