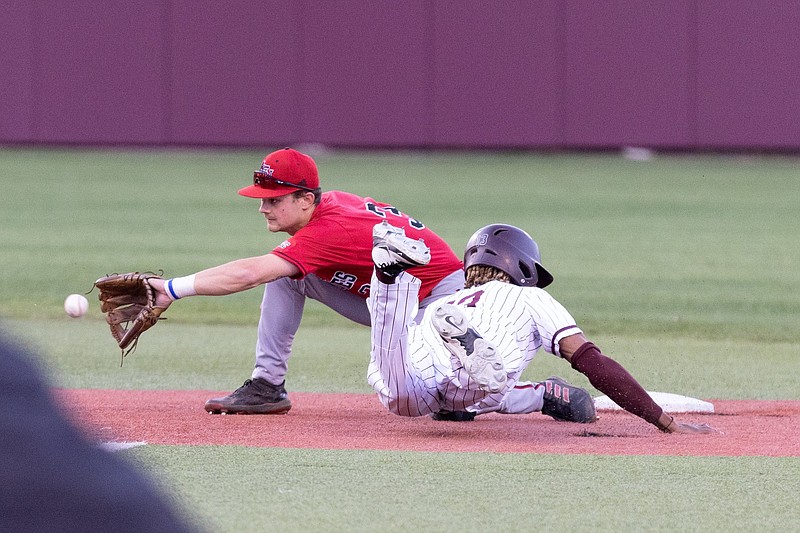 The ball off Canyon McWilliams' bat hung in for seconds that seemed like minutes. It carried toward the scoreboard in right-center field, poised to sneak over the wall and tie the game with two outs in the bottom of the ninth.

Then it dropped, bouncing off the top of the maroon padding and onto the warning track with McWilliams at second instead of crossing home.

One pitch later, the game was over, and so too was Arkansas State University's 14-game Sun Belt Conference losing streak.

The Red Wolves escaped Gary Hogan Field with a 6-5 win against the University of Arkansas-Little Rock on Thursday night -- marking ASU's first conference win since May 20. Starter Justin Medlin, who entered the night 0-4 with a 4.70 ERA in eight starts, fought through 51/3 innings while allowing just one run and scattering five hits on 90 pitches.

"He's got a big heart," Red Wolves Coach Tommy Raffo said of Medlin. "If he was 92-93 [miles per hour], we probably wouldn't be here. But he competes with all his stuff and moves the ball around just enough to kind of throw hitters off-balance."

The Trojans didn't generate any offensive momentum until the fifth, putting one runner in scoring position over the first four innings. UALR (16-14, 6-7 Sun Belt) broke the deadlock in the fifth, scoring Tyler Williams on a safety squeeze bunt but couldn't create any further havoc.

"[That was the difference] right there," Trojans Coach Chris Curry said while pointing at Medlin's line in the box score. "We did not do a very good job of making an offensive adjustment to him."

ASU (6-24, 1-12) immediately answered the hosts, getting its first run on back-to-back one-out doubles by Jacob Hager and Ben Klutts.

Although UALR starter Hayden Arnold was able to wriggle out of the top of the sixth with just the lone run allowed, the Red Wolves attacked again in the seventh. Cooper Tremmel and Garrett Olson kicked things off with consecutive singles, and following a failed bunt attempt by pinch-hitter Mickey Coyne, Wil French successfully laid one down and reached first to load the bases.

Sawyer Smallwood entered to relieve Arnold, yet he couldn't slow the ASU momentum. Jared Toler ripped a single to left, giving the visitors a 3-1 lead. Klutts then flied to center two batters later, stretching the Red Wolves' lead to 4-1.

ASU added another in the eighth to go up 5-1, but things got dicey with its bullpen.

"We've been so close in so many games," Klutts said. "It's not like we're getting beat by eight runs, 10 runs a night."

With the ASU lead at four runs, the Trojans started their rally with a walk and a Noah Dickerson double. They scored one on a McWilliams ground out and then tacked on two more against closer Kevin Wiseman when Miguel Soto singled to left with two outs.

Hussein flew out to left on the first pitch he saw, keeping UALR behind 5-4.

Brandon Hager scored brother Jacob in the ninth to push the Red Wolves' lead back to two runs, but the Trojans looked to have one last rally in them.

With Tyler Jeans in for Wiseman, Dickerson singled down to UALR's final strike. Then came McWilliams' long double, pulling the Trojans within one at 6-5.

Lyons came to the plate representing the winning run, yet just as Hussein had done the inning before, the Bentonville native swung at the first pitch, popping out to French in shallow left.

ASU's dugout erupted at the final out, more than 31/2 hours after the game had begun.

"In the past, we've had the lead or were close and then [the other team] scored and it was just deflating," Klutts said. "Now I feel like we have a little bit of confidence rolling with us. We've been in all these games and now we closed one out, so we know we can do this."