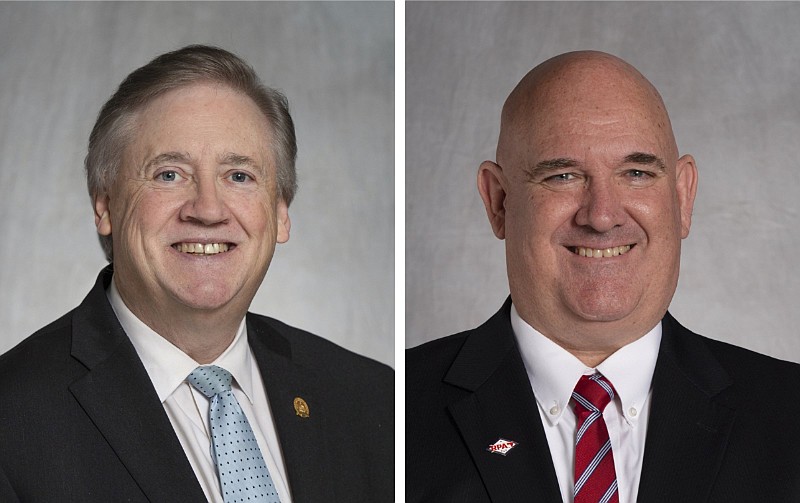 Complaints alleging campaign finance violations in reports from both of Arkansas' GOP state treasurer candidates were submitted to the state Ethics Commission this month, according to documents obtained by the Arkansas Democrat-Gazette.

State Rep. Mark Lowery, R-Maumelle, and state Sen. Mat Pitsch, R-Fort Smith, will vie for the Republican nomination for the constitutional office in the May 24 primary.

A complaint submitted to the Arkansas Ethics Commission on April 4 alleges that Pitsch over-reimbursed himself for campaign mileage, while a complaint submitted to the commission Monday contends that Lowery filed misleading or incomplete campaign finance reports and that he has not reported a 2017 bankruptcy filing that he is in the process of resolving on his statements of financial interest.

Arkansas Ethics Commission Director Graham Sloan said he could not confirm the complaints' existence because the law requires the commission to keep pending matters confidential.

Sloan said all violations of laws under the Ethics Commission's jurisdiction carry the same sanctions, which can include the issuance of a public letter of caution, warning or reprimand and/or the imposition of a fine ranging from $50 to $3,500.

The complaint against Pitsch was submitted by Adam Key, an assistant professor at the University of Arkansas at Monticello. Reached by phone Tuesday, Key said Lowery, whom he knows through debate competitions, had mentioned issues with Pitsch's campaign finance reports to him. Key said he is not a Republican nor part of Lowery's campaign, but dug into the issues himself because of his own interest in ethics and good government.

Pitsch characterized the complaint as a political attack from Lowery.

"My initial response is this is nothing more than a bait-and-switch from my opponent," he said by phone Wednesday.

"I just read a couple things, did some research and thought, what the heck," Soffer said. "It's public documents, people talk, and I just have time to look into it."

Soffer's complaint states that Lowery's finance reports appear to contain "materially misleading" or incomplete dollar amounts for the beginning and ending of the reporting periods. Soffer also said Lowery failed to meet filing deadlines and that none of his statements of financial interest list debts to creditors despite the fact that Lowery is in the process of resolving a 2017 bankruptcy filing.

Lowery launched a bid for secretary of state in June 2021, then pivoted to the treasurer's race in January.

Records available on the secretary of state's website confirm that Lowery did not report the bankruptcy on any of the statements of financial interest he has filed since 2018, and show that two of the three campaign finance reports he filed in his secretary of state bid were turned in after the deadline. The two campaign finance reports he had filed for his treasurer bid as of Friday evening were filed on time, according to online records.

Shown the complaint, Lowery said he would reserve comment until contacting the Ethics Commission.

"The complaint is so full of factual inaccuracies and allegations that have no bearing to the truth that I will reserve comment until I have met with Ethics Commission staff and a possible request for a hearing before the Commission to refute the complaint," he said in an email.

Lowery added that his opponent's "sycophant" supporters were resorting to a "kitchen sink" strategy of hurling false ethics complaints to distract from Pitsch's record.

Pitsch said his campaign did not ask Soffer to make the complaint.

"We have nothing to do with anything like that," he said.

Arkansas' treasurer serves as the state's banker and manages an investment portfolio of more than $5 billion. The officeholder is paid $95,693.76 annually. The incumbent, Republican Dennis Milligan, is term-limited and running for state auditor.

Early voting for the primary begins May 9, and the deadline to register to vote in that election is April 25. The winner of the Republican primary will face Democrat Pam Whitaker of Little Rock in November's general election.