McEwen’s clutch catch helps No. 7 Arkansas down No. 8 Kentucky 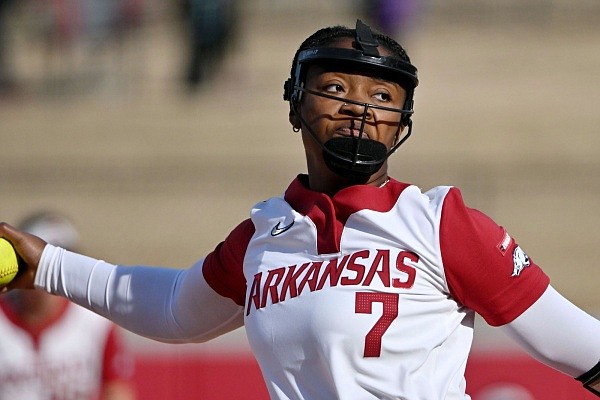 FAYETTEVILLE -- In a matchup of two of the better softball offenses in the SEC, pitching and defense won out on Friday evening.

Arkansas left fielder Hannah McEwen robbed Renee Abernathy of a potential two-run homer in the top of the fifth inning that would have given No. 8 Kentucky a one-run lead. But McEwen's grab preserved the Arkansas lead and helped the No. 7 Razorbacks complete a 2-1 victory at Bogle Park.

Even Arkansas Coach Courtney Deifel joked with her staff that it could be a low-scoring game despite the two strong offenses, but it wasn't what she expected.

"It wasn't at all what I expected," Deifel said. "I expected a lot of offense. We got a pitcher's duel. When you have pitchers that match up really well and then it ends up a whole lot of runs. And then you're like, their offense is really potent, they score a whole lot of runs and we hold 'em to one. So go figure? I'll take it though."

"I think we have had wins that all look very different, like today we did just enough to win. I don't think our offense was as good. I think they do a really good job executing pitches and being really aggressive in where we're looking where we just mis-hit a little bit more. I thought our defense and Chenise [Delce] were exceptional tonight. They carried us and gave us a chance. I thought our defense was outstanding."

Deifel acknowledged she thought Abernathy's ball was probably out of the park, but the wind knocked it down a bit and allowed McEwen a chance to run it down.

"Off the bat of Abernathy, we may have said some choice words in the dugout," Deifel said. "Because we thought it was out. That's the one thing we didn't want to hang a pitch out and she just does such a good job when you hang a pitch out off her hands a little bit.

"When the pitch was coming in, it was like, 'Ahhh crap.' She was right on it. It's almost like the wind swirled in that moment and just kind of held it up and Hannah did a really good job of reading it because off the bat I thought it was out."

Delce, the reigning SEC Pitcher of the Week, got some solid defense behind her. The junior transfer allowed a run on 6 hits, struck out 9 and walked 2. She improved to 10-2, thanks to McEwen's catch which preserved the lead.

"They're really confident," Deifel said. "That's what really shows, their confidence on defense. You know our offense has always allowed us to play freely and know if we make a mistake, we can overcome it. But today it wasn't that kind of game."

Hannah Gammill's solo home run in the bottom of the fourth snapped a 1-1 tie and kept the Razorbacks in front.

The second game of the series is scheduled for 7 tonight, while the finale is set for 11 a.m. Sunday, weather permitting.

The University of Central Arkansas provided continual offense through the middle innings Friday at Gertrude Hood Field in Richmond, Ky., taking the first game of the doubleheader.

Pitcher Jordan Johnson went all 7 innings for the Bears (24-15, 9-5 ASUN Conference), scattering 4 hits while striking out 11. No. 3 hitter Mary Kate Brown had a perfect day, going 4 for 4 with a pair of RBI.

Eastern Kentucky (7-30, 3-11) had chances, leaving nine runners on base, but the Colonels’ only run came in the bottom of the fourth on a Vianna Barron solo homer.

The Bears scored single runs in all but the third and seventh innings in the latter half of the doubleheader to complete the sweep.

Jaylee Engelkes hit her team-best ninth home run of the season and four different players logged two hits for UCA, including Jenna Wildeman, who went 2 for 5 with a pair of runs and her 30th stolen base of the season.

Adrey Garcia’s single to left center field scored Maya Barnes in the bottom of the eighth inning to left Prairie View A&M (10-24, 10-6 Southwestern Athletic Conference) to a comeback win at the PVAMU Softball Complex in Prairie

Biviana Figueroa scored three times and four players had two hits each for the Panthers, who were down 8-7 in the eighth. Jerrica Rojas tied it at 8-8 with a solo home run before Garcia’s RBI won it.

Sierra Johnson had three hits and two RBI, and Samaria Jackson contributed three RBI for UAPB (5-32, 3-13), which held a 7-5 lead in the bottom of the seventh until a two-run home run by Prairie View A&M’s Jaylyn Davis sent the game into extra innings.