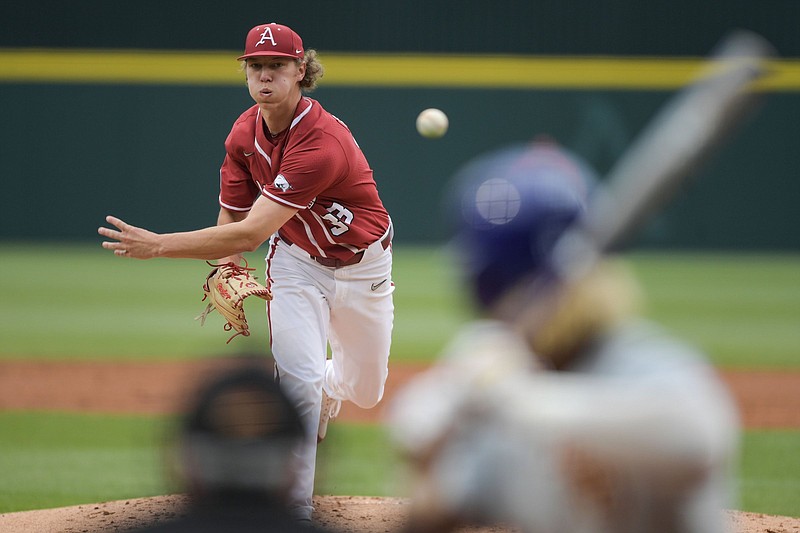 Arkansas freshman left-hander Hagen Smith delivers a pitch against LSU during Friday night’s game at Baum-Walker Stadium in Fayetteville. Smith allowed no runs on 2 hits with 7 strikeouts over 7 innings to earn the victory in the Razorbacks’ 4-0 win. More photos available at arkansasonline.com/416lsuua/. (NWA Democrat-Gazette/Hank Layton)

FAYETTEVILLE -- University of Arkansas freshman pitcher Hagen Smith bounced back in a big way from a rough outing at Florida and the Razorbacks hit three home runs to beat LSU 4-0 on Friday night at Baum-Walker Stadium.

The No. 5 Razorbacks handed the No. 12 Tigers their first shutout of the season to the delight of an announced crowd of 10,811.

"Real impressive," Arkansas Coach Dave Van Horn. "I mean, it's hard to shut anybody out, especially a team with that lineup.

Smith (6-2) matched his season-high by going 7 innings and holding the Tigers to 2 hits and 1 walk with 7 strikeouts. The left-hander from Bullard, Texas, had 64 strikes on 98 pitches.

"It didn't go good for Hagen last week at Florida and he took it personal," Van Horn said. "He worked extremely hard [this] week. He got with [pitching coach Matt Hobbs] and did a lot of talking. Had a great bullpen session.

"He was on a mission and pitched really well. He didn't overthrow. He threw the ball 92, 93 miles an hour, 91, with his fastball. Then used his secondary pitches effectively.

"He can throw harder than that, but today he really pitched."

The stadium scoreboard showed Smith had a few pitches that hit 95 miles an hour.

"He reared back every now and then and let it fly," Van Horn. "But he just really spotted it up and did a nice job pitching in and out."

Smith said he changed up his routine this week.

"Stretching out a little more, throwing a pregame bullpen," he said.

LSU loaded the bases with two outs in the eighth inning, but Evan Taylor got Cade Doughty on a flyout to right fielder Chris Lanzilli to keep Arkansas' lead at 4-0.

Taylor, a senior, then retired the Tigers in order in the ninth inning, striking out Josh Pearson swinging to end the game for his first career save.

"It was a fastball," said the left-handed hitting Turner, who hit his home run over the left-field fence. "Got in a good count, 1-0. I knew he wasn't going to want to get behind 2-0. So I was sitting fastball, and he gave me one up and away, and I put a good swing on it."

Arkansas made it 4-0 in the fifth inning when Chris Lanzilli hit a two-out home run.

The Razorbacks, who beat LSU 5-4 on Thursday night, won their 12th consecutive home series against an SEC team, including taking two of three games against Ole Miss in a 2019 NCAA Super Regional.

Arkansas also won a third consecutive series against LSU (23-11, 7-7) for the first time. The Razorbacks beat the Tigers two of three games in Fayetteville in 2019 and two of three in Baton Rouge last season.

"They're the No. 1 team in the country with a bunch of fourth- and fifth-year players," LSU Coach Jay Johnson said of the Razorbacks. "They're better defensively ... starting pitching is better. They're more athletic, so they can present more problems.

"They're just more complete. We'll get there."

Van Horn said Smith did a good job of pitching under control.

"He definitely repeated his delivery today, which means if you're doing that usually you're staying on line and you're going to throw the ball over the plate," Van Horn said. "That was a super job against a good-hitting team like that.

"I mean, that is a very scary lineup over there."

Arkansas will try for its first sweep of LSU since 2011 and fourth overall in today's 2 p.m. series finale.

"I think Jaxon will have a good outing, and I feel good about the guys that are going to be ready behind him," Van Horn said. "Game 3, it means a lot. I mean, you can separate yourself a little bit if you find a way to win.

"Our guys know that. We don't have to tell them every time, 'Hey, tomorrow, this is what it means.' They know.

"These guys are smart. So it would be big if we could find a way to win again."

SHORT HOPS Arkansas’ pitching staff has thrown shutouts in 3 of the last 4 games, including a doubleheader sweep of Arkansas-Pine Bluff on Tuesday when the Razorbacks won 15-0 and 6-0 … LSU suffered its first shutout of the season. It’s previous low-scoring game was a 6-1 loss to Texas in Houston … Arkansas has beaten LSU in back-to-back series in Fayetteville for the first time since 1999 and 2001 … Senior Evan Taylor got his first career save for the Razorbacks by going the final 1 1/3 innings … Arkansas has won 12 consecutive home series against SEC teams, including take 2 of 3 games from Ole Miss in an NCAA Super Regional in 2019. The Rebels were the last visiting SEC team to win a series at Arkansas when they took 2 of 3 regular-season games in 2019. 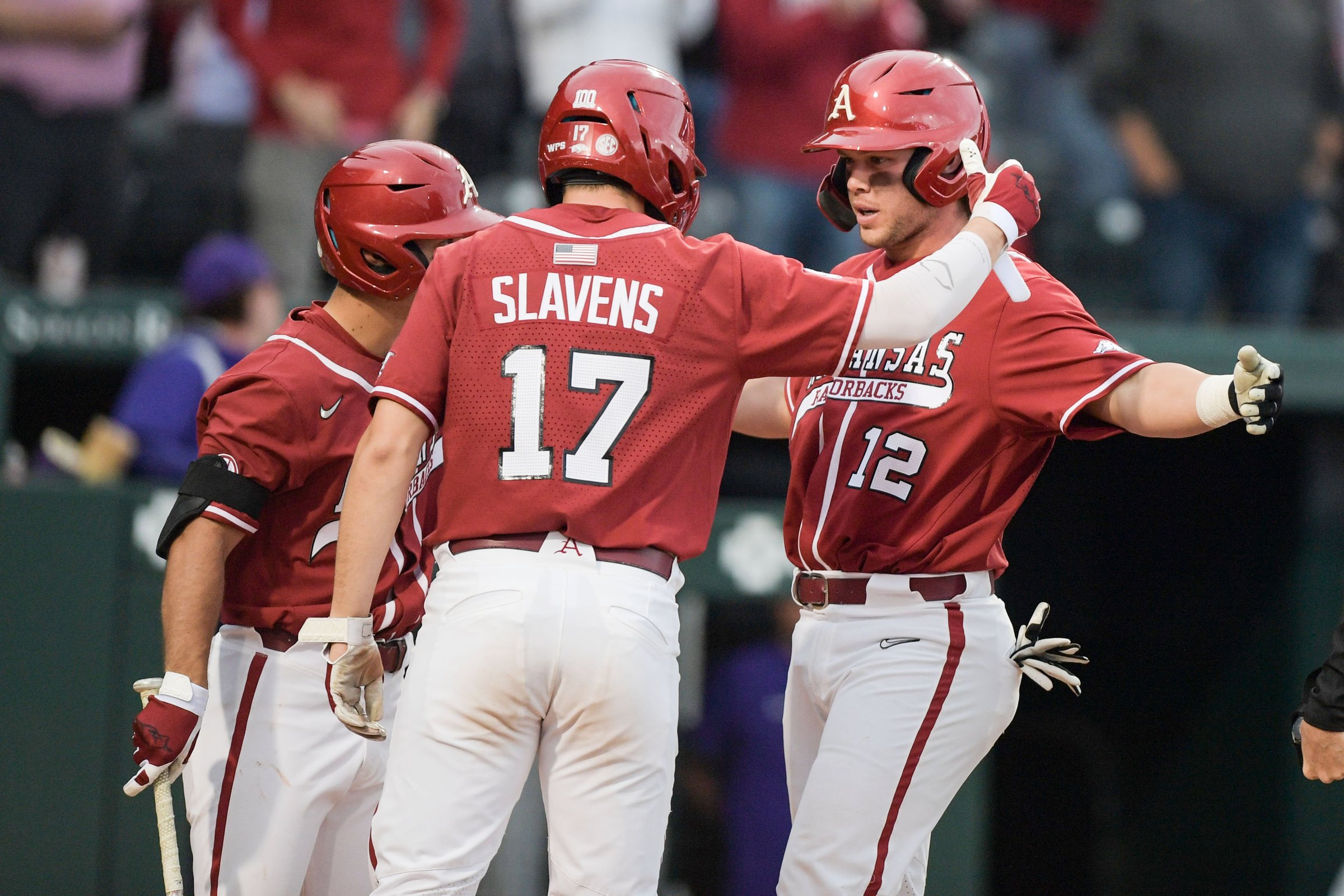 University of Arkansas catcher Michael Turner (right) celebrates with teammates Brady Slavens and Robert Moore after hitting a two-run home run Friday in the third inning of the Razorbacks’ 4-0 win over LSU at Baum-Walker Stadium in Fayetteville. Turner finished 3 for 4 at the plate and broke the game open with his fifth home run of the season. (NWA Democrat-Gazette/Hank Layton) 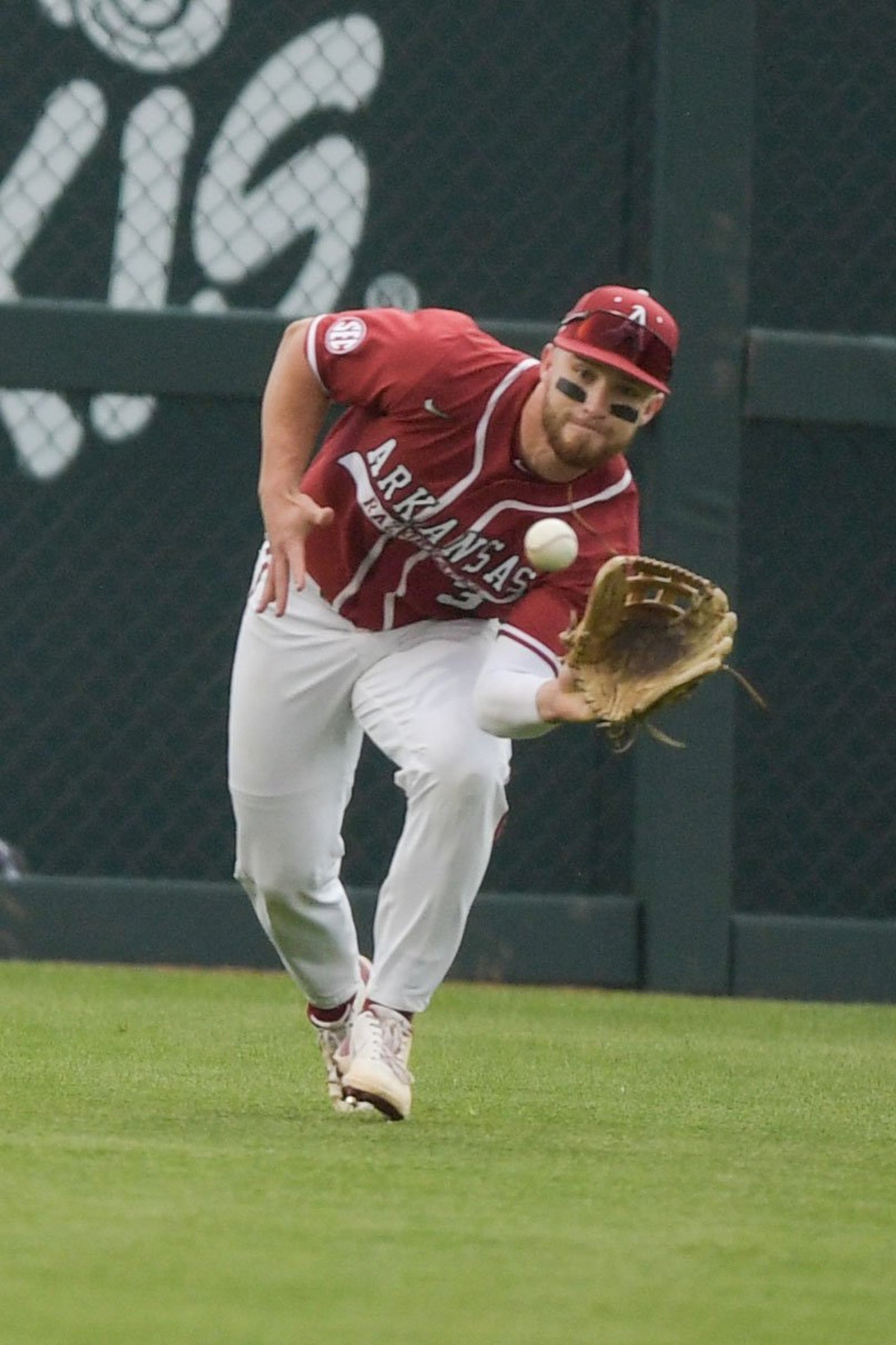 University of Arkansas left fielder Zack Gregory catches a line drive in the Razorbacks’ 4-0 victory over LSU on Friday at Baum-Walker Stadium in Fayetteville. Gregory also produced with his bat, hitting his fifth home run of the season in the third inning to start the scoring. (NWA Democrat-Gazette/Hank Layton)