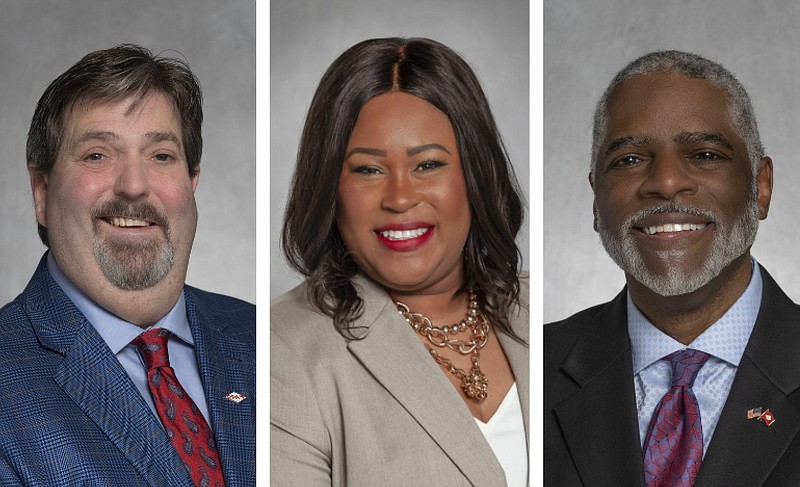 Twelve candidates for state and federal offices in Arkansas have state income tax liens filed against them, with totals ranging from just more than $1,000 to nearly $90,000, according to state records.

The list of candidates comprises one for U.S. senator, one for lieutenant governor, two for prosecuting attorney, seven for state representative, and one for state senator, based on records provided by the state Department of Finance and Administration to the Arkansas Democrat-Gazette on March 30 under the Arkansas Freedom of Information Act.

The records show that state Senate candidate Warren Robertson, a Republican from Alma, has the largest state income tax lien balance at $89,921.87, while prosecuting attorney candidate Martin Lilly of Jonesboro has the second-largest balance, at $80,158.69.

A lien is a legal claim or hold on a piece of property as security for the payment of a debt. It has the same force as a judgment issued by the circuit court, where the liens are filed.

"All of the liens provided March 30 in response to the Democrat Gazette's FOIA request remain active today," Department of Finance and Administration spokesman Scott Hardin said Friday in a written statement.

Candidates "may have submitted payments that are being processed in order to issue the formal release," he added.

There also is a federal tax lien filed against Robertson and Christie Emerson for $13,320.59 for the period ending Dec. 31, 2016. The federal tax lien was filed Feb. 2, 2022, with the Crawford County circuit clerk.

In response to the Democrat-Gazette's questions about the state and federal tax liens, Robertson said Thursday in a written statement that "[t]he mentioned tax liens are in dispute and my accounting group has been working on resolving these issues created by false K-1's and 1099 that were issued in previous tax years."

He said that "my business history in the private sector has not been like many Americans would say seamless success." He said he has been a police officer for numerous years and worked in construction and now in insurance. He said he has been a sole proprietor, part of corporations, and part of partnerships.

"During that time I have paid more taxes than any American wants to pay while trying to earn a living," Robertson said in his written statement. "Most Americans in my shoes definitely would pushback the IRS because of the false K-1's and 1099's and would hire accountants like I have to assist with this. So, the conflict isn't whether or not I have had a seamless business history when in fact, I have had a very educational business history and have learned alot through hard knocks and dirt in my teeth experience."

In the Republican primary, Robertson is vying with Jim Petty of Van Buren in Senate District 29, which includes the majority of Crawford County and portions of southern Washington County. The winner will be unopposed in the Nov. 8 general election.

Robertson's wife, Christy, of Alma, is challenging Rep. Charlene Fite of Van Buren in the GOP primary in House District 24. The winner will be unopposed in the general election.

Warren Robertson said that "Unlike my opponent, who has for a lot of years, made his living off of tax credit benefits of tax subsidized low income housing construction and management and continues to do that to this day, I have never been the guy that makes his living off of your tax dollars subsidizing my pockets and if I did, I definitely would not be running for this office as it would be an obvious conflict of interest.

"So with that said, I feel like it is helping me against my opponent because the majority of people are common sense, grassroots people that understand my situation and know that I am the people's choice," he added.

In response, Petty said Friday in a written statement that "When someone owes hundreds of thousands of dollars in back taxes to the government, that is concerning."

"The Legislature recently removed a member for owing much less than this amount in back taxes," Petty said.

In October 2019, the state House of Representatives voted to expel state Rep. Mickey Gates, R-Hot Springs, over the lawmaker's no-contest plea to failing to pay state income taxes. The 88-4 vote easily surpassed the two-thirds threshold needed to expel a member.

It marked the first time in more than a century that a member had been expelled by the House.

He said he has hired a firm that handles tax issues and that he hopes to have the state tax liens filed against him resolved by the primary election. He is vying with Corey Seats of Jonesboro and Sonia Fonticiella of Paragould for the prosecuting attorney post.

According to the state finance department, the following state tax liens are filed against Martin and Sandra Lilly:

In addition, there is an individual income tax lien filed against Martin Lilly for $511.77 for 2012. The tax lien was filed Oct. 20, 2014, with the Craighead County circuit clerk.

Lilly said he has hired the firm that handles tax issues to "work at getting those [tax liens] resolved."

"Some of that is disputed taxes," he said.

Lilly said he doesn't know how much is in dispute because the firm is handling the matter.

"I am letting them handle it, and that is something that is being negotiated between them and the state," he said.

John Pettie of Newport is running for prosecuting attorney in Judicial District 3. District 3 includes Jackson, Lawrence, Randolph and Sharp counties. He is vying with Devon Holder of Pocahontas for the post.

Penix is Pettie's former wife. They were divorced in 2019, according to the Jackson County circuit clerk's records.

Pettie said Monday that he had already paid off one of the tax liens and is working on paying off the other one.

Pettie on Wednesday provided a copy of a letter from the Department of Finance and Administration that shows he has a zero balance for his tax-year 2017 individual income tax account, as well as a copy of a transcript from the finance department that shows he has zero balance for his tax year 2016 individual income tax account.

Asked whether he could confirm these documents, Hardin said Wednesday that while the finance department is prohibited from discussing the specifics of any taxpayer's situation, "we can confirm the letters are legitimately from our Department."

Natalie James of Little Rock is running for the U.S. Senate seat held by Republican incumbent John Boozman. She is one of three Democratic candidates seeking their party's nomination in the May 24 primary.

James said she had her taxes done by a certified public accountant who "didn't know exactly what he was doing" and didn't report her deductions. She said she later amended them and thought the Department of Finance and Administration had received the amended amount, so there shouldn't be a lien.

"I heard later he forgot to report some things," James said by phone Tuesday. "I didn't realize until I got this huge tax bill from the feds. ... I've amended and they should have updated it."

She said she had forgotten about the situation amid the campaign but would call the Department of Finance and Administration about it.

Hardin, the finance department's spokesman, said it takes several steps to resolve a balance owed prior to the filing of a lien.

"This includes an initial notice letter along with a separate final notice that follows if the balance remains. If the balance remains following the final notice the Department must determine if a lien is created and filed. When a lien is issued, a Certificate of Indebtedness is provided to the Circuit Clerk's Office (where the citizen resides). The balance must be paid in full for the lien to be released," he said in an email.

Joseph Wood is the county judge of Washington County and one of six Republican candidates running for lieutenant governor in the May 24 primary election.

The state tax lien filed against Joseph and June Wood of Fayetteville is for $8,575.03 in individual income taxes for 2019. The lien was filed Dec. 18, 2020, with the Washington County circuit clerk.

Asked about the state tax lien, Wood said last week in a written statement that "Our family exercised stock resulting in the tax penalties to take care of my mother-in-law, who eventually succumbed to cancer, and to care for my brother-in-law who now lives in a nursing home after sustaining brain injuries from a motor cycle accident.

"We are working to pay off the tax obligations," he said.

Rep. Jeff Wardlaw, R-Hermitage, is a co-chairman of the Legislative Council. He is running for reelection in House District 94. Two Democrats are seeking the party's nomination in the primary to challenge Wardlaw in the general election.

The state tax lien filed against Jeffrey and Laura Wardlaw of Hermitage is for individual income taxes of $2,940.86 for 2020. The lien was filed Feb. 14, 2022, with the Bradley County circuit clerk.

Wardlaw said in a recent interview that the tax lien was filed against him because he didn't sign a yearly payment form in January to make his standard $200-a-month payment for individual income taxes. He said he signed the form in late February.

Wardlaw said the lien won't be released until he pays off the taxes that he owes in December. He said he's never paid off his state incomes taxes beyond December in any year.

After the Department of Finance and Administration's initial outreach to the taxpayer and prior to the filing of the lien, the department may agree to a payment plan in which the debt is paid in full within 12 months, Hardin said.

Roy Vaughn, a Democrat from Alexander, is running for state representative in District 81. Two Republicans are vying for their party's nomination in District 81 in the primary. A Libertarian candidate also is seeking the post in the general election.

Vaughn's campaign had not returned a request for comment as of Friday.

Cheryl Primm, a Libertarian from Bono, is running for state representative in District 30. She will face the Republican nominee -- either Rep. Fran Cavenaugh of Walnut Ridge or Coty Powers of Walnut Ridge -- in the general election.

Primm said in an email that she was not aware there was an outstanding balance on her taxes.

"The only outstanding balance I had was personal income taxes, and it should be zeroed out now with the refunds I received for both 2020 and 2021," she said, adding that she would have her accountant look into it and address the situation.

Reached by phone Tuesday, Powers said the situation arose because he worked a job where he got paid on commission and received his 1099 form before the commission check, so he didn't have money to pay the taxes. He said he was working to fix the issue but that it became harder when his house burned down in March 2021 and he lost the records.

"I'm trying to fix all that," he said. "It's been difficult trying to figure it all out, especially since my house burned. ... I believe in paying my taxes."

Christia Jones, an independent from Lonoke, is running for state representative in District 60. She is challenging state Rep. Roger Lynch, R-Lonoke, in the general election.

Clayton Hall, a Libertarian from Judsonia, is running for state representative in District 39. He will face the winner of the GOP primary between state Rep. Craig Christiensen of Bald Knob and Robert Griffin of Newark.

Teresa Norman, a Libertarian from Salem, is running for state representative in District 2. In the general election, she will face the winner of a three-candidate Republican primary, including state Rep. Marsh Davis of Cherokee Village.

Jones, Hall and Norman had not not returned voicemails seeking comment as of Friday.

Information for this article was contributed by Thomas Saccente of the Northwest Arkansas Democrat-Gazette. 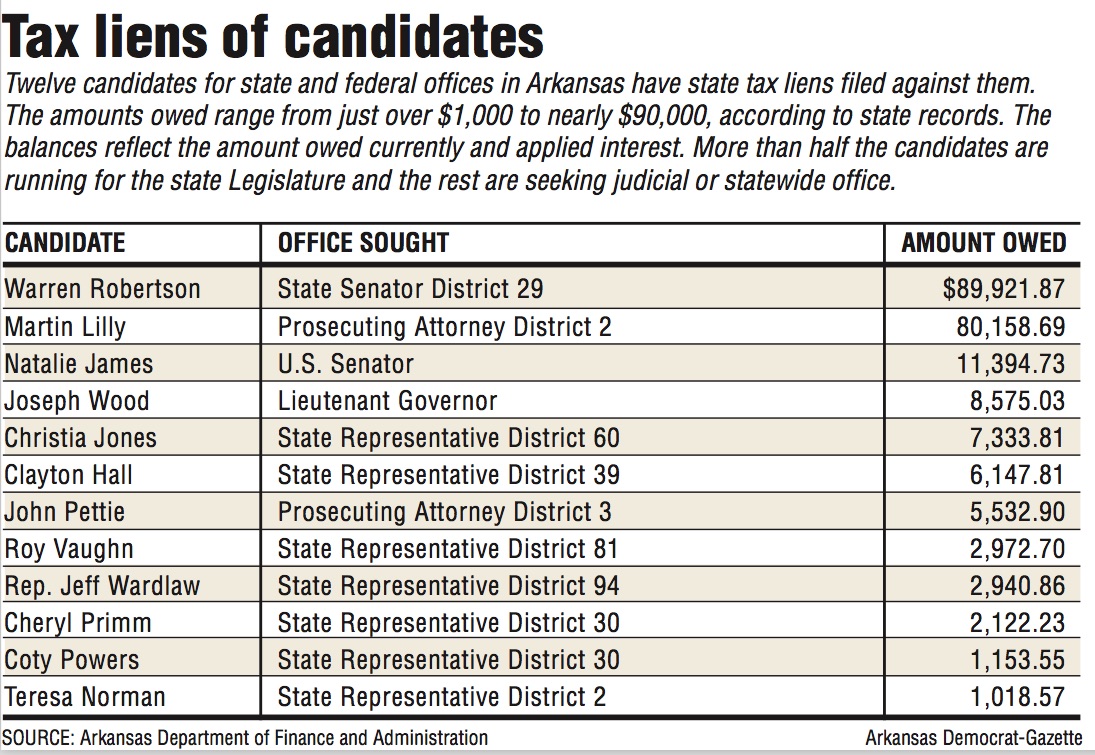