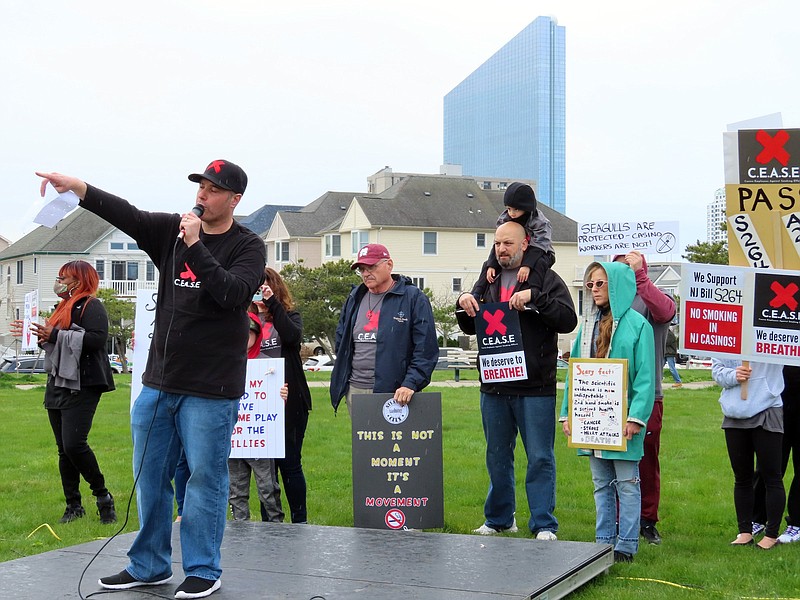 Pete Naccarelli, a dealer at the Borgata casino, speaks at a rally in Atlantic City, N.J. last week, to call on the state Legislature to pass a bill to ban smoking inside the nine casinos. (AP/Wayne Parry)

ATLANTIC CITY, N.J. -- On the 16th anniversary of a New Jersey law that banned indoor smoking in most public places -- except in casinos -- hundreds of Atlantic City casino workers have called on state lawmakers to ban smoking in the gambling halls.

The push comes at a crucial time for the Atlantic City casino industry as it tries mightily to regain lost business from the coronavirus pandemic. At the same time it is bracing for the opening of one or more additional casinos in New York City, which will compete for many of Atlantic City's customers.

Phil Murphy, New Jersey's Democratic governor, has promised to sign the ban if it is passed. And an unusually high number of legislators have signed on as co-sponsors of the bill.

But it faces strong opposition from the casinos and from the main casino labor union in Atlantic City, which fear widespread job losses if smoking is banned in the casinos.

About 250 casino workers gathered in a park near the ocean on April 12 to call on lawmakers to pass a bill that would end the casinos' exemption from the indoor smoking law. They say they have endured years of breathing in second-hand smoke, watching colleagues die and becoming sick themselves.

"Sixteen years ago the state of New Jersey left us behind in the smoke," said Lamont White, a dealer at the Borgata casino. "We are not numbers. We are people."

The casino industry opposes the measure, saying it will cost jobs and revenue amid an uneven recovery from the coronavirus pandemic when only two casinos have surpassed the profit level they enjoyed before the pandemic began.

Nicole Vitola, another Borgata dealer, said it has been galling to see friends fall ill in workplaces that lack the same health protections other industries enjoy.

"It's been 16 years of cancer diagnoses, 16 years of watching our beloved co-workers die," she said. "We keep hearing, 'Now is not the time.' When is it going to be the right time to care about us?"

"And land-based casino revenue remains at an almost 50% decrease from our peak in 2006," he added. "Adding a smoking ban could cause a devastating effect to the community and state."

Casino workers vehemently dispute the findings of that report. They say it does not take into account a likely improvement in business conditions in the years after a smoking ban is enacted, as gamblers become used to a smoke-free environment.

"While we want to ensure that our members work in a safe work environment, banning smoking in New Jersey casinos would mean lost jobs for our union and throughout the state, and lost tax revenues and less money for senior programs," he wrote.

Earlier this month, state gambling regulators released figures showing that Atlantic City casinos collectively exceeded the levels of gross operating profit that they enjoyed before the pandemic broke out in 2020.

But virtually all that improvement came from the two newest casinos in the market, Hard Rock and Ocean, with the other seven remaining flat since the start of the pandemic.

The bill has not yet had a hearing in the state Legislature, although it continues to gather support from lawmakers of both parties. It has 28 co-sponsors in the Assembly and 15 in the senate, including majorities of the health committees in both houses.

"The whole world has figured out how to eat outside and smoke outside," said Assemblywoman Claire Swift, a Republican. "The nine casinos can figure it out."

"We know this bill would pass today with flying colors if it got put to the floor," said Pete Naccarelli, a Borgata dealer. "Soon I will be thankful because I will be working in a smoke-free environment like everyone else in the state of New Jersey."