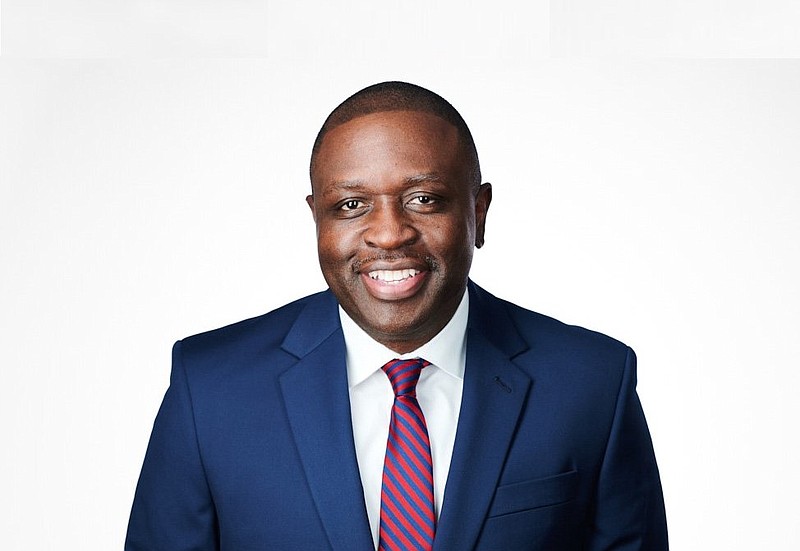 George "Eric" Thomas, a finalist for the role of Little Rock School superintendent, started college as a business major but a boring summer in a corporate cubicle steered him into education.

Still, Thomas -- who has had a long affiliation with the University of Virginia's Partnership for Leaders in Education that is attached to the Darden School of Business -- didn't completely abandon that business mentality.

"Even though I'm a teacher by trade, I see things oftentimes through a little bit of a business lens," Thomas said recently about leadership, change and strategic planning.

"One of the fundamental aspects of change is that if you want someone to change, they have to be a part of the change process. When they own the change -- when they were at the table, when they signed their name to the change -- they will do everything possible to make the change work because it is theirs."

Thomas, 53, who lives in Atlanta, is seeking to bring his experiences in business organization, talent development, community schools, charter school competition and improved student achievement to a long-term job of being Little Rock's superintendent.

He will be in Little Rock on Wednesday for a second interview with Little Rock School Board members who are seeking a successor to Superintendent Mike Poore. Poore announced in December that he will retire in June after leading the 21,000-student capital city district for six years.

The Wednesday evening interview and dinner will be preceded with a morning tour of three schools and meetings with district employees, parents and civic and business representatives.

Members of the public who would like to meet Thomas can do so at a community forum at 4:15 p.m. Wednesday at the school district's administration building, 810 W. Markham St.

Thomas started his education career as a high school social studies teacher in Cincinnati where he rose to be chief innovation officer in the 35,000-student system. As such he helped lead the development of an early digital academy, two gifted academies and a New Tech High School, which is a national career and technology education instruction program.

He has not been a superintendent but was deputy superintendent/chief turnaround officer for the Georgia Board of Education from 2017 to 2020. As such, he and a staff of 25 worked with eight Georgia school districts and served as many as 100,000 students to bolster the state's low-performing schools.

Mike Royal, a member of the Georgia Education Board, said Friday that he enjoyed working with Thomas.

"He was always passionate about his work and doing what was best for kids," Royal said in an emailed response to questions. "His collaborative style was welcomed by his partner districts. Eric's focus on improving leadership, at all levels, was pivotal."

Thomas described the Little Rock district in an interview last week as being the perfect size -- a sweet spot -- in terms of districts that have the best chance to improve, even transform.

"When you have a large district, it's like the Titanic. It's almost too big to transform itself," he said of systems of 100,000 or more students. "On the other side of that -- in really small districts -- you get into the finances. And with low enrollment you don't always have opportunity to maximize economies of scale from a financial standpoint. You just don't have enough finances to offer certain programs or do certain things."

The needs of the Little Rock district align with his experiences and skills, Thomas said, noting the urban nature of the district and the existence of low-achieving campuses.

"If this was a high-performing district that is stable and everything perfect, I wouldn't be sitting in front of you," he said. "That's not my background."

He also said he doesn't have "a manual in my back pocket" on how he might oversee the Little Rock district. But he has "a pretty decent toolbox" from which to draw strategies as the result of his past employment in Cincinnati and in Georgia, and as a leadership consultant in places such as Caddo Parish, La., Charlotte-Mecklenberg, N.C., and San Antonio districts.

Any effort to improve student achievement must center first on recruiting, developing and retaining highly effective teachers and then principals, he said, acknowledging the focus is not revolutionary.

Thomas called himself "a huge advocate" of the community schools or community learning centers, of which Little Rock has four with two more in development. Community schools provide support and services to students, families and the school neighborhood that go beyond a traditional academic program for students.

He also suggested the Little Rock district needs "a robust strategy" for growing its student enrollment in competition with charter schools. The kind of work has been done successfully in Cincinnati in part by using focus groups to examine school options.

Thomas said his work is "anchored" in community engagement, the importance of which he learned in his first job as a high school principal in a high-poverty Cincinnati neighborhood where he had lived in his teens. The school, which improved from an F rating to a B rating, had become a partner to the surrounding community. Thomas, school staff and students put themselves at community council meetings and at neighborhood events to build partnerships and support for the campus.

"It has literally laid my foundation, " Thomas said of the experience. "Every role that I have taken since then ... is anchored by engaging people. This work is just too difficult to do it by yourself. You have got to involve parents, the community, business owners."

Thomas, who has been married for 25 years and has an adult son and two grandchildren, spent his elementary school years in Savannah, Ga., then moved to Cincinnati, where he graduated from high school and earned a bachelor's and master's degrees from the University of Cincinnati. His master's degree is in educational leadership as is his doctorate from Concordia University Chicago.

In Cincinnati, his roles included teacher, principal, principal coach, and chief innovation officer. According to his website, he oversaw the redesign of the teacher evaluation system, the development of new schools, and established a model for supporting male students at risk of failing to graduate. He also initiated an aspiring principal's academy.

Between 2012 and 2017, Thomas served as chief support officer for the University of Virginia's Partnership for Leaders in Education school turnaround program. The Partnership for Leaders in Education is a joint project of the university's business and education schools. The turnaround program was to support districts as they worked to improve their lowest performing schools.

In 2017, Thomas was selected to be the first chief turnaround officer for the 14-member Georgia Board of Education, to improve the worst-performing schools in the state. He reported directly to the state Education Board.

His office was audited by the state Department of Education in January 2020, and that audit led to a review by the state office of inspector general and a finding of mismanagement of the office and interference in contracting decisions, according to the Atlanta Journal Constitution newspaper. Thomas sued in February 2020, raising accusations of retaliation. Ultimately, the Georgia Education Board reviewed the audit and Thomas' response to it, took no disciplinary action and closed the matter with the statement that said in part:

"The Board thanks Dr. Thomas for his professionalism during this matter and his passion and commitment to Georgia's students, families, and communities."

Thomas received a financial settlement to his lawsuit.

Thomas said last week that the turnaround work resulted in 70% of the affected schools reporting their highest outcomes and that the number of failing schools decreased by almost half, 47 %. The innovations established by the Georgia office -- data dashboards and health and wellness initiatives -- were later expanded across the state, he said.

Royal, the Georgia Education Board member, said Friday that a lot of good came from Thomas' work.

"Ultimately, Eric's team had a tremendous impact on their partner schools and districts. And, as intended by the legislation, innovations piloted by his team have impacted Georgia's improvement efforts statewide," Royal said.