Swept away: Wiggins, Hogs get first Tigers sweep since 2011 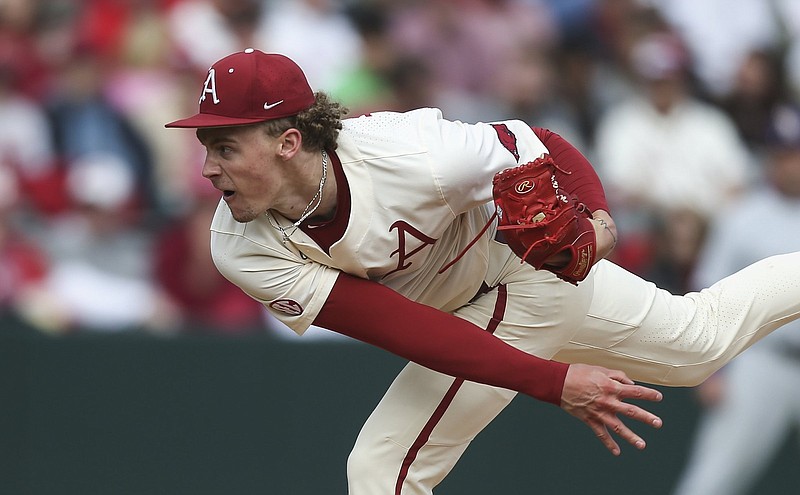 Sophomore right-hander Jaxon Wiggins improved to 5-0 as he went 5 1/3 innings and allowed 9 hits and 2 runs while walking 3 and striking out a career-high 9 in the No. 5 Razorbacks’ 6-2 victory over No. 12 LSU on Saturday at Baum-Walker Stadium in Fayetteville. Arkansas swept the series to win its fifth in a row. More photos available at arkansasonline.com/417lsuua/. (NWA Democrat-Gazette/Charlie Kaijo)

FAYETTEVILLE — LSU had plenty of chances to build a big lead against the University of Arkansas on Saturday.

But the Tigers couldn’t come through with timely hits as Razorbacks starter Jaxon Wiggins continually pitched out of trouble.

After the Tigers left nine runners stranded through five innings against Wiggins and could only score one run, the No. 5 Razorbacks came back to beat the No. 12 Tigers 6-2 on Saturday at Baum-Walker Stadium before an announced crowd of 11,049.

“Jaxon didn’t have his best stuff today,” Arkansas Coach Dave Van Horn said. “The command wasn’t there. But he fought.

“Give him credit for hanging in there and fighting. He’s got a knack for getting out of jams.

“We played outstanding defense behind him. Made every play.”

The sophomore right-hander had 64 strikes on 101 pitches and came out of the game after an RBI single by Tre’ Morgan pulled the Tigers within 4-2.

“I always think Jaxon gets better as the game goes on,” Arkansas second baseman Robert Moore said.. “He lands more breaking balls and changeups for strikes, and when he does that, here comes 98 [miles per hour on the fastball], so it’s kind of hard to hit.

“Sometimes it takes him a little time to get in rhythm. .But when he does, it’s pretty good. I think he out-talents hitters sometimes.”

LSU went ahead 1-0 in the second inning on an RBI double by Dylan Crews, but the Tigers left the bases loaded when Wiggins got Jacob Berry on a flyout to right field Chris Lanzilli.

Wiggins allowed one-out singles to Cade Doughty and Josh Pearson and in the fifth inning, but they left were stranded. After Jordan Thompson struck out swinging, home plate umpire Scott Cline called Brayden Jobert out on strikes when he fell behind 0-2, then failed to get back in the batter’s box in a timely manner after being warned to do so.

“I saw a lot of fight,” Arkansas third baseman Cayden Wallace of Wiggins’ performance. “They had a few hits off of him, but there were only one or two that were barrels.

“He pounded the zone for the most part and did his thing and overpowered them. Just everything he throws looks effortless, so it’s a tough battle in the box when you’re facing him.

“We just knew that Jaxon was going to give us his best and we were going to score runs.”

Arkansas scored four runs in the fifth inning to take a 4-1 lead.

Jalen Battles singled off Taylor to advance Webb to third base. Peyton Stovall hit a sharp ground ball to Taylor, who couldn’t field the ball cleanly and Webb scored, Battles went to second base and Stovall reached first.

Zack Gregory then walked after failing to get down a sacrifice bunt. Wallace followed with a two-run single to score Battles and Stovall. Brady Slavens added a sacrifice flyout to left field that scored Gregory from third base.

Slavens hit a two-out, two-run home run in the seventh inning — after Stovall doubled and went to third base on Gregory’s sacrifice bunt — off LSU reliever Paul Gervase to extend Arkansas’ lead to 6-2.

Zack Morris replaced Wiggins and pitched 2 2/3 scoreless innings after striking out the side in an inning of work in the Razorbacks’ 6-0 victory over Arkansas-Pine Bluff on Tuesday.

“I kind of challenged him — ‘That’s the Zack Morris we need,’ ” Van Horn said. “I actually ran into Zack today in the locker room on the way out to the field maybe an hour and a half before the game. I said, ‘You be ready today. We’re going to need you.’

“He went out there and did it. He got out some good hitters, made some great pitches.

“Almost to the point where we were tempted to send him back out in the ninth. But he had thrown enough.”

Freshman closer Brady Tygart retired the Tigers in order in the ninth.

“We got us a good win after starting out like it wasn’t going to go very well,” Van Horn said. “Like maybe this wasn’t our day.”

“We had opportunities to score today, we just didn’t get them in,” LSU Coach Jay Johnson said in postgame news release.

“I know as a coach the feeling in the dugout when maybe you have a one-run lead or two-run lead, but you just keep leaving guys on and on,” Van Horn said. “The pitcher keeps getting out of a jam, and you just feel like, ‘Man, this is going to get us.’ And I’m going to say 75% of the time it does.”

The Bears could not complete the series sweep in Richmond, Ky., despite outhitting the Colonels 9-8.

UCA (16-18, 10-5 ASUN Conference) struck first after a scoreless opening three innings at Earle Combs Stadium on Noah Argenta’s sacrifice fly. But Eastern Kentucky (22-13, 9-6) answered in the bottom of the fourth with two solo home runs. Connor Emmet then hit his fourth home run of the series, putting the Bears up 3-2 in the fifth.

But Eastern Kentucky catcher Will King’s two-run home run off UCA closer Andrew Shoultz in the seventh gave the Colonels the lead for good, keeping Eastern Kentucky a game behind the first-place Bears in the ASUN West standings.

Arkansas State at No. 5 Arkansas

Former Arkansas pitcher Dick Hughes, who is 84 and won 16 games in 1967 for the World Series champion St. Louis Cardinals, threw out the ceremonial first pitch before Saturday’s game. … DH Brady Slavens drove in 3 runs Saturday, including a 2-run home run, and leads the Razorbacks with 35 RBI … LSU freshman reliever Grant Taylor, the younger brother of Arkansas senior Evan Taylor, faced 4 batters in the Razorbacks’ 4-run fifth inning but didn’t record an out and fell to 4-1. Evan Taylor pitched a combined 21/3 scoreless innings in the Razorbacks’ 5-4 and 4-0 victories on Thursday and Friday. … Arkansas swept LSU for the first time since 2011. 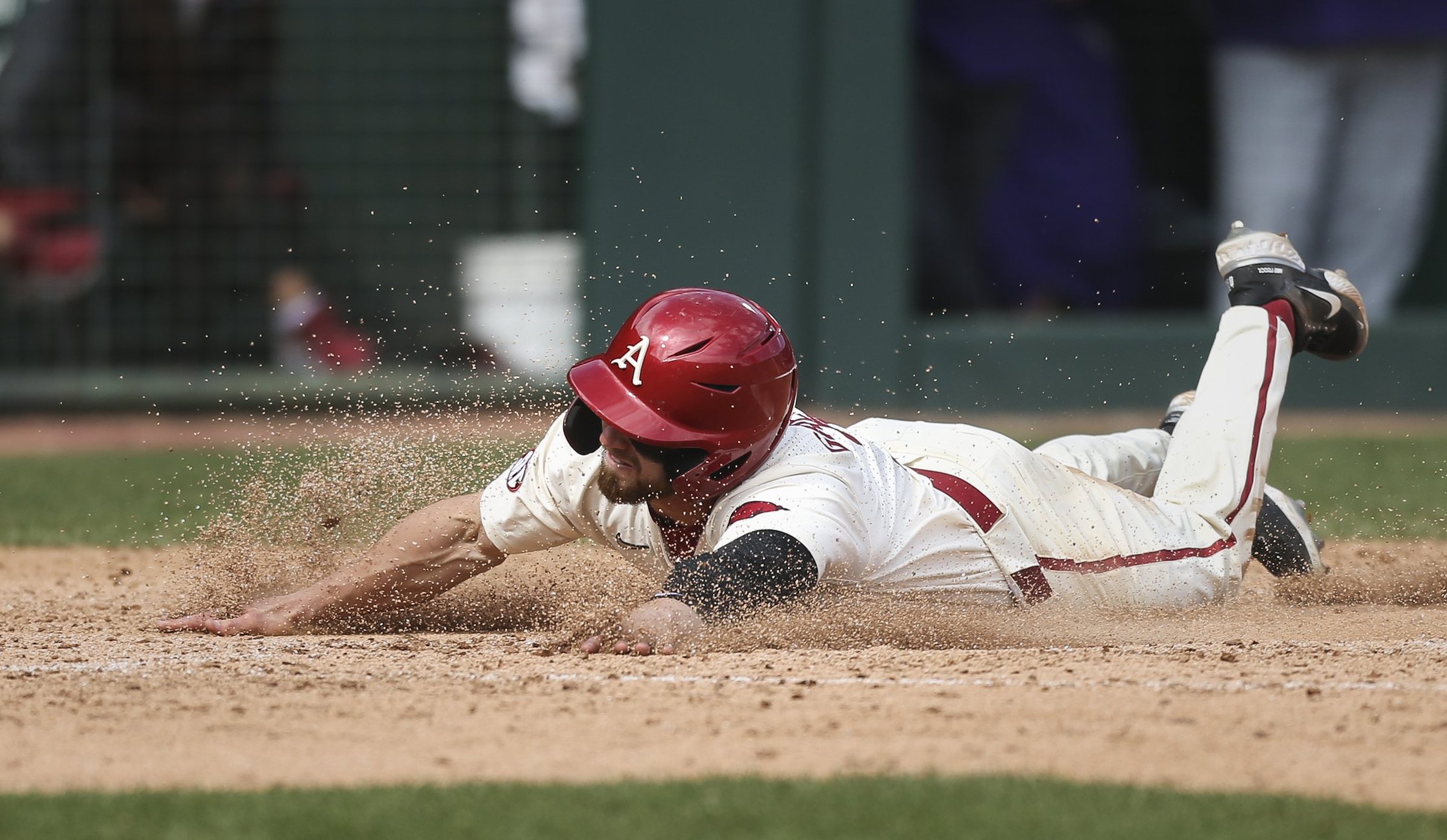 Arkansas outfielder Zack Gregory slides home for a score during fifth inning to put the Razorbacks up 4-1 en route to a 6-2 victory over LSU on Saturday. (NWA Democrat-Gazette/Charlie Kaijo) 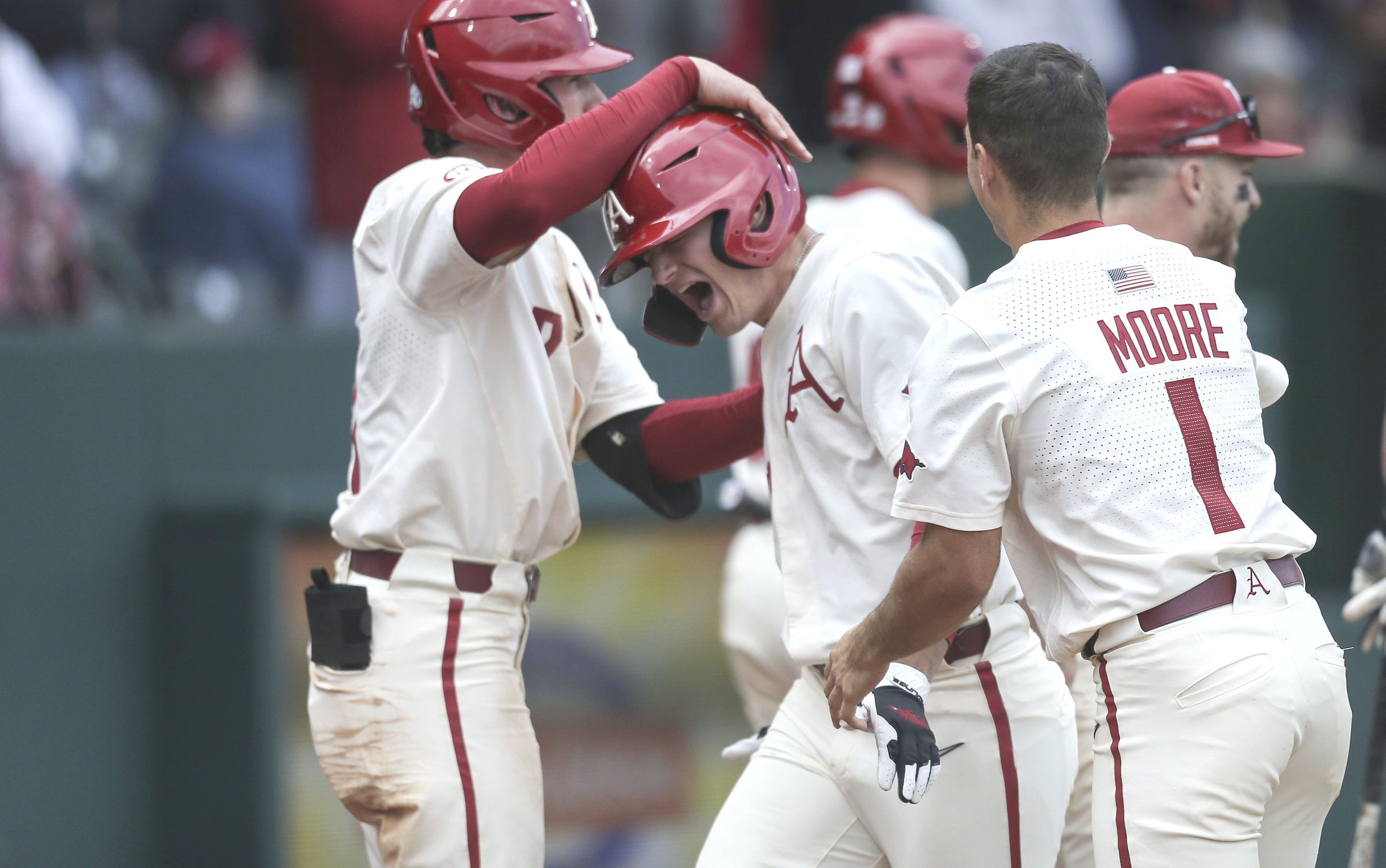 Brady Slavens (17) is greeted by teammates after a two-out, two-run home run in the seventh inning for the final runs of the game. More photos at arkansasonline.com/417lsuua/ (NWA Democrat-Gazette/Charlie Kaijo)
Cha