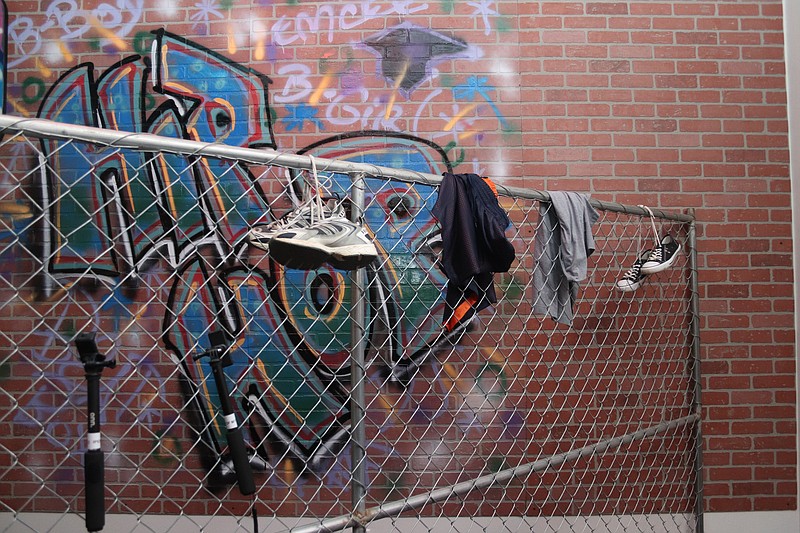 A graffiti wall behind a chain-link fence draped with relics is the setting for “And the Beat Don’t Stop: 50 Years of Hip-Hop,” a traveling exhibit from the National Hip-Hop Museum’s Pop Up Experience that opened April 7 and runs through July 1 at Mosaic Templars Cultural Center in Little Rock. (Arkansas Democrat-Gazette/Helaine R. Williams)

It's actually next year that hip-hop will recognize its 50th anniversary. It was on Aug. 11, 1973, that DJ Kool Herc hosted a back-to-school jam in the Bronx to help his little sister raise money for school clothes, and set it off.

Then there's "And the Beat Don't Stop: 50 Years of Hip-Hop," now showing at Mosaic Templars Cultural Center in Little Rock. Kicking off the exhibit's April 7 opening was a party Kool Herc would have sanctioned: dueling DJs, a 360-degree photo booth, graffiti artists in the parking lot, poets from Philander Smith College, and break dancing.

Flash back to two days before that opening. The artifacts — most of which are part of a traveling exhibit from the National Hip-Hop Museum's Pop Up Experience — are almost in place. Especially the sneakers ... positioned to be the first things visitors notice.

The sneakers — all sizes, shapes, colors and designs, bearing such brands as Adidas and Patrick Ewing, and customized for and signed by artists — are not only already encased in glassed-in display shelves; they're all carefully wrapped in plastic. 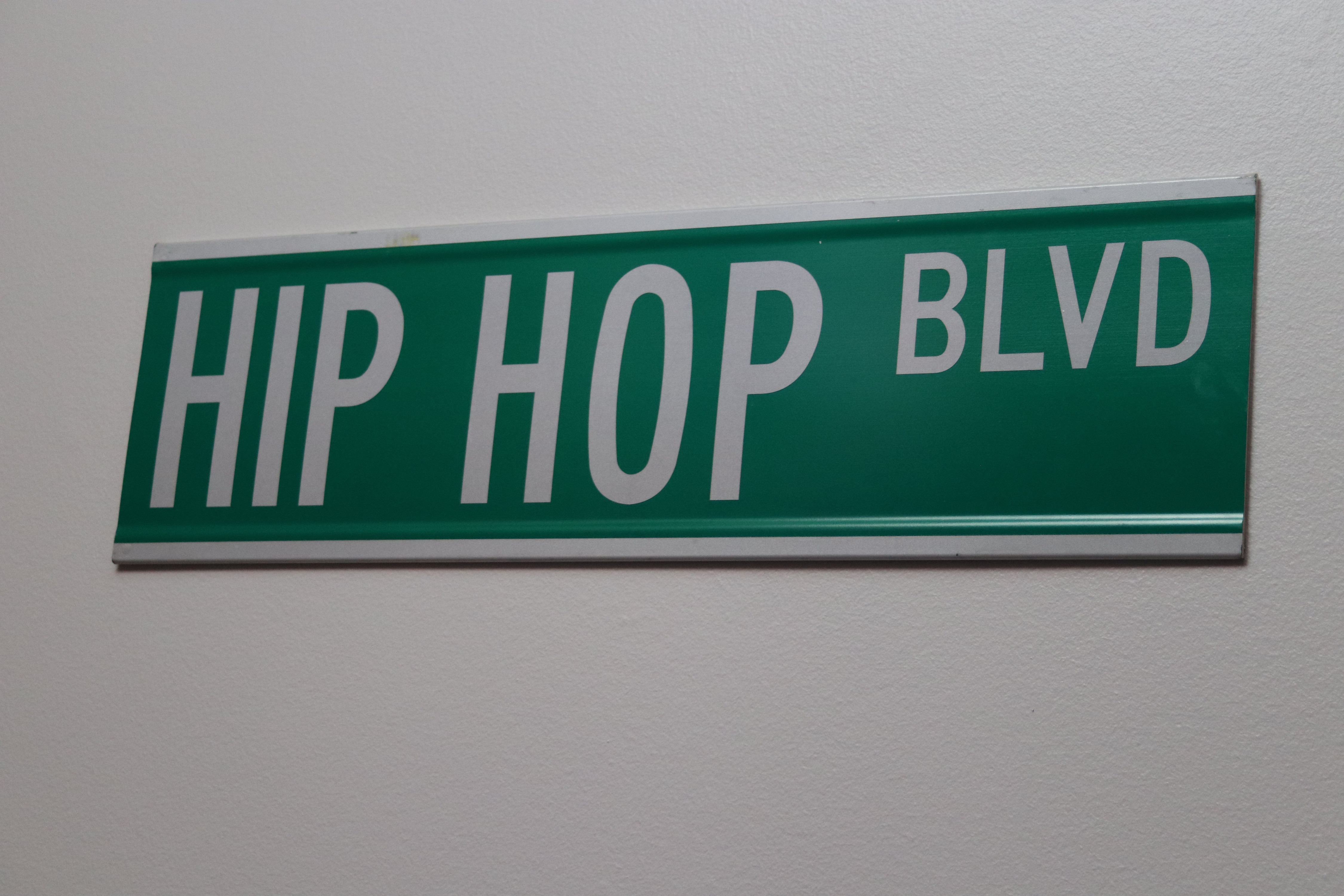 Standing against the north wall of the exhibit room are two mannequins outfitted in Adidas track suits, Kangol hats and gold chains as were members of the rap group Run DMC in their heyday. On the west wall, graffiti art bearing the word "Hip-Hop" peeps from behind a tall chain-link fence, indicating the urban environmental womb that bore a genre so enduing and ubiquitous, even a company such as Sofi Technologies — a personal finance company, a type of entity that might ordinarily be seen as staid — would feature people dancing to Compton Av's infectious "Money Dance" in its commercials.

A second visit on April 8 reveals the finished exhibit. One mannequin is deejaying; the other standing by a chair, chilling, in a house-party setting. The chain-link fence now has a tied pair of shoes draped over it; a basketball goal rises just south of the graffiti. All plaques are up, lined neatly on the walls. A soundtrack of hip-hop music is sure to cause some visitors to dance.

This exhibit, sponsored locally by The Design Group, is the brainchild of curator Courtney Bradford, who on April 5 gave a visitor a sneak peek at what would be.

"Around this time last year, I was trying to think of what was going to be like the next big thing," Bradford says. "I saw that the 50th anniversary of hip-hop was coming up; it's actually in 2023. But I kind of wanted to give it a head start. And it's funny how it all worked out with me wanting to do this exhibit. 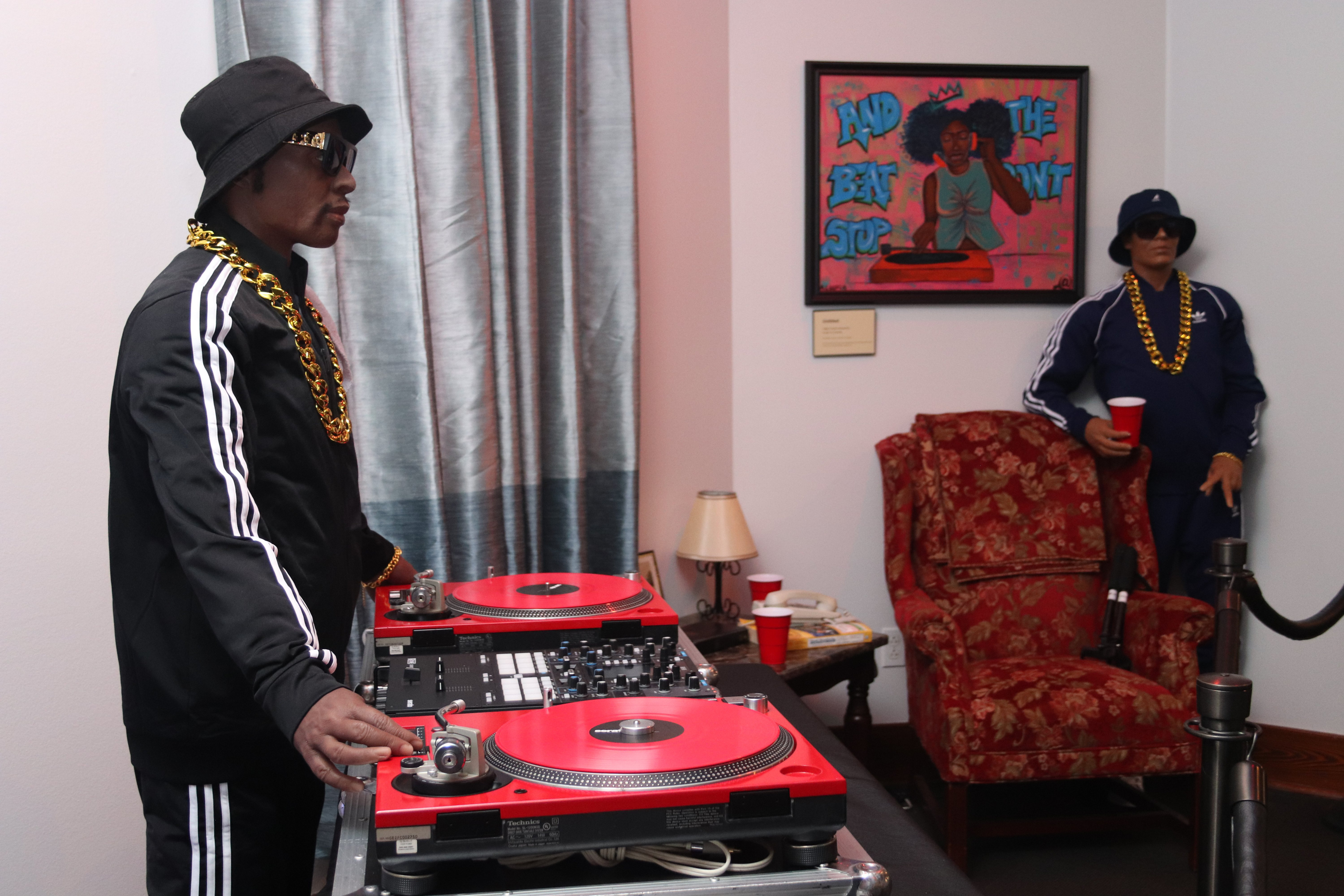 Bradford decided to contact the National Hip-Hop Museum in Washington, saying she wanted to do a hip-hop exhibit and "kind of wanted to cover the hip-hop culture, like all the way around.

"And so [with] this exhibit you'll see ... the gold, diamond and platinum RIAA [Recording Industry Association of America] awards, you'll see these customized sneakers. But the theme of this exhibit is kind of like ... a celebration of hip-hop. So not just the music but the fashion, the emceeing, the graffiti. So the elements, bringing the elements out.

"Some people grew up in a hip-hop culture," Bradford continues. "I grew up in it a little bit, but people [for whom] this is for real ... what they live, eat and breathe — it's almost like an homage to them, and to celebrate the culture, the hip-hop culture. I'm really excited about this."

She shows where there will be a live DJ booth and a selfie area on opening night.

"It's supposed to be reminiscent of the basketball courts in New York, and the graffiti, and the fencing. So we do have a [basketball] goal that's going to go up." The graffiti-ed brick wall has to be perfected. "And then of course, putting the rest of these plaques up. 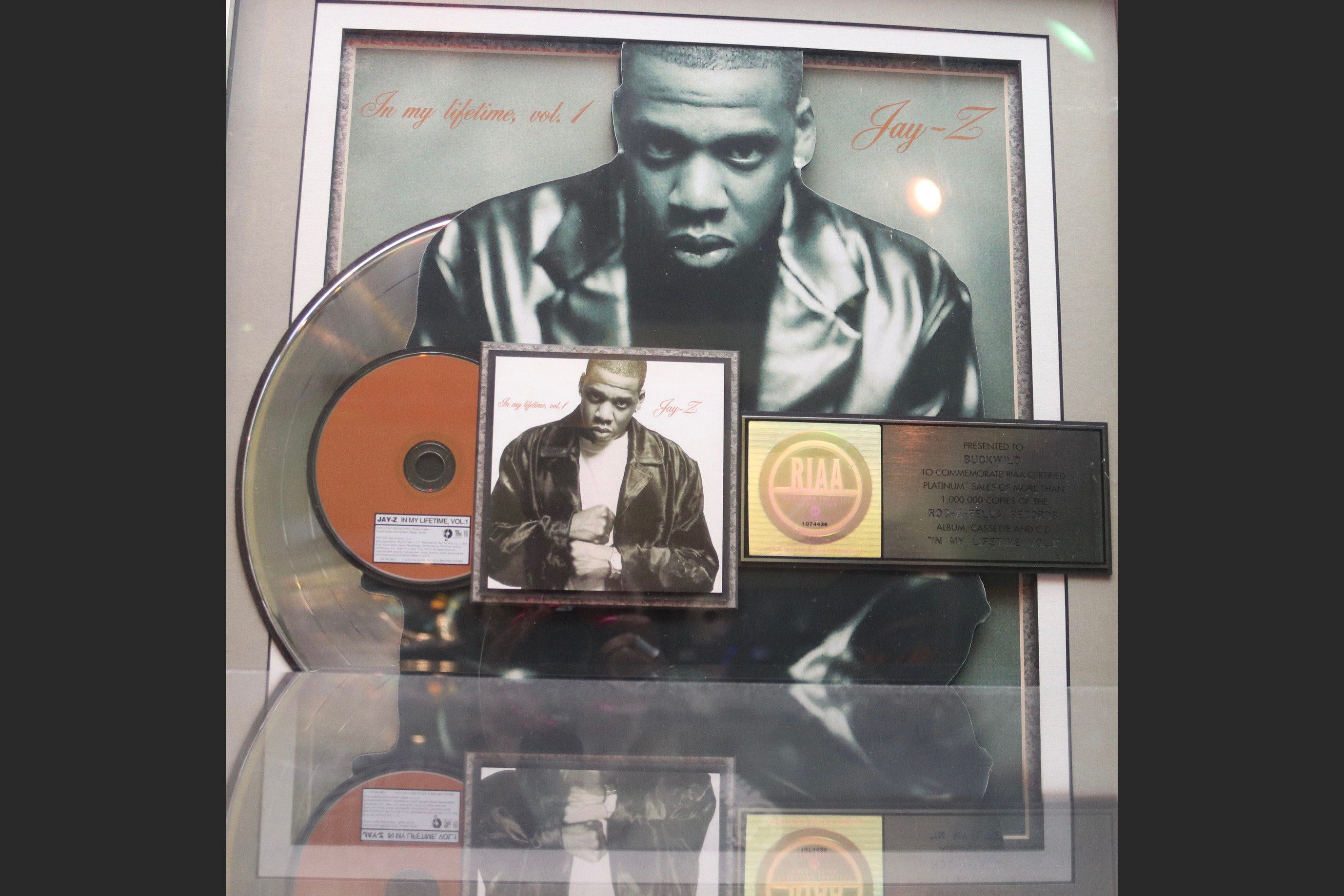 Jay-Z’s 1997 album “In My Lifetime, Vol. 1” is immortalized. The album in its first week sold more than 138,000 copies and was certified Platinum by the Recording Industry Association of America. (Arkansas Democrat-Gazette/Helaine R. Williams)  "When you walk into this gallery, it's kind of directional. So once you walk in, we're like in the East Coast. This is the east side of our gallery so we're in the East Coast" — where it all began.

On the south wall can be found plaques for Southern artists such as Houston's Geto Boys and the Atlanta-based rap duo Outkast. There are also nods to Arkansans who helped hip-hop along, such as A.D. Washington, who was an executive with MCA Records. And on the north wall can be found fliers for hip-hop concerts in local venues.

Then Bradford points out the shoes ... those that, instead of being in the larger cases, are in cases of their own below the plaques of the artists they represent. Customized Biz Markie shoes, bearing the image of the late rapper, are with the Biz Markie album. In one of the larger cases, another pair of sneaks bears a take on the Burger King logo, with those notorious bawdy lyrics from the late Shock G in Digital Underground's 1990 hit "The Humpty Dance." (Both men died in 2021.)

"And I really like these. These are 20th anniversary shoes for The Notorious B.I.G.'s album 'Ready to Die,'" Bradford says. There's a pair of white Adidas shoes signed by Run DMC.

This isn't a chronology of hip-hop's history. It's a celebration of the genre. 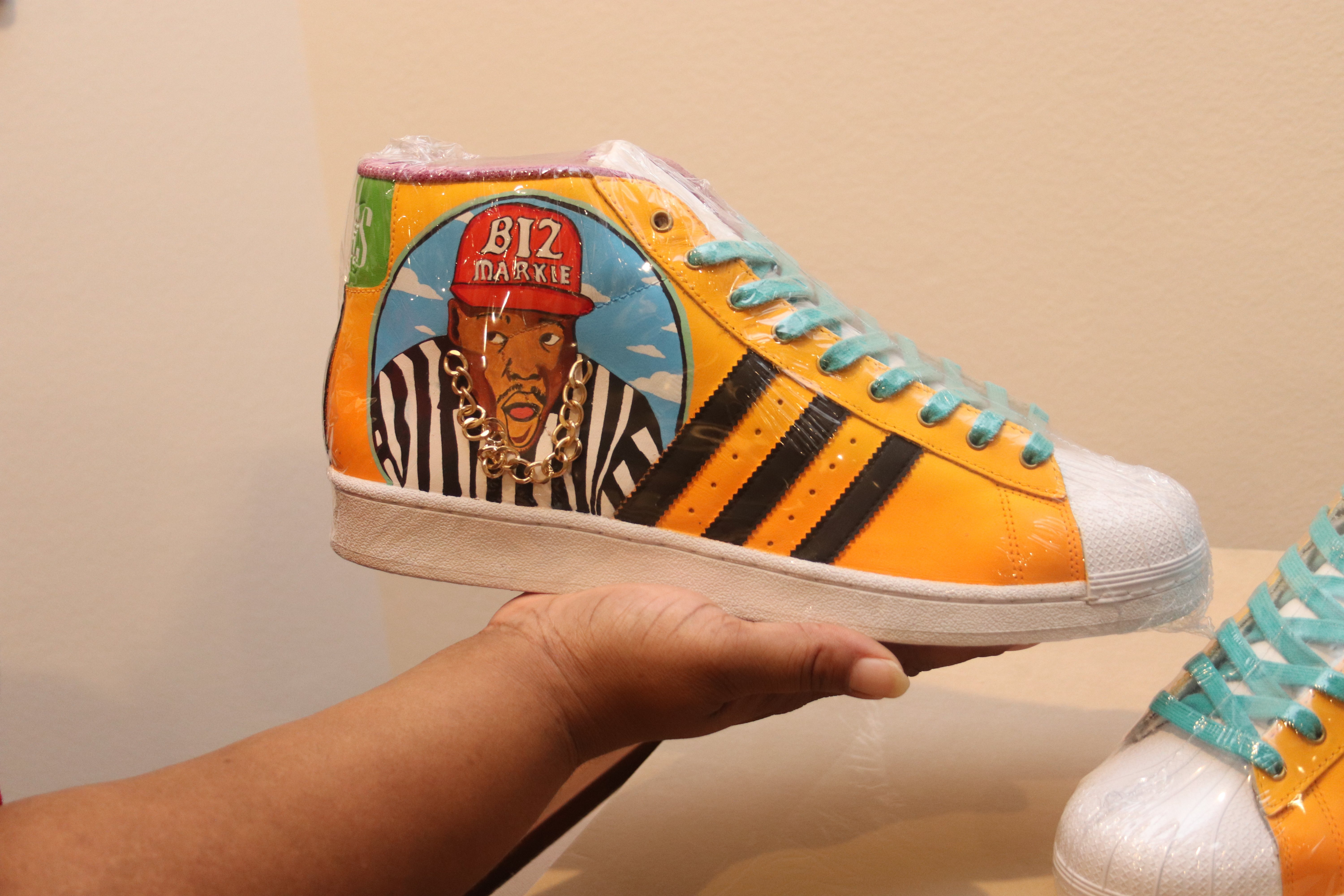 "A lot of these shoe companies were designing shoes simply for different rap artists, like Ludacris ... these shoes here, and [they come] in this nice little bag." The bag resembles the familiar purple Crown Royal whiskey bag.

Of course the exhibit wouldn't be complete without the main early conveyor of hip-hop ... the boom box, usually toted on a shoulder back in the day. Three of them, different sizes, brands and models, hold court in the exhibit. One bears a TV screen.

Bradford, 32, says that "learning more about hip-hop culture" has been the big takeaway for her, putting this exhibit together.

"I think people assume that because I'm African American, I would know more about it. I know a little bit about it and I wasn't ... really allowed to listen to it a lot" as a child.

"But it's [good] to be able to see how much people love it, how this is people's lives."

The shoe wrappings surprised her, she says.

"I actually had no idea that they wrapped shoes, and that's how they preserved them ... Even in my training, we never talked about shoe preservation. But then, looking at this I had to go back and do further research. And I said, 'Well, yes, that's right; that's how that's supposed to be.' So ... I think it's very neat. I didn't know that they created shoes specifically for hip-hop artists. Had no idea ... I love shoes too, but I didn't know. I said, 'They actually have their own shoes.' Oh, like these 'Fight the Power' ones," bearing the title of the hit song by the group Public Enemy.

"I would rock that shoe." 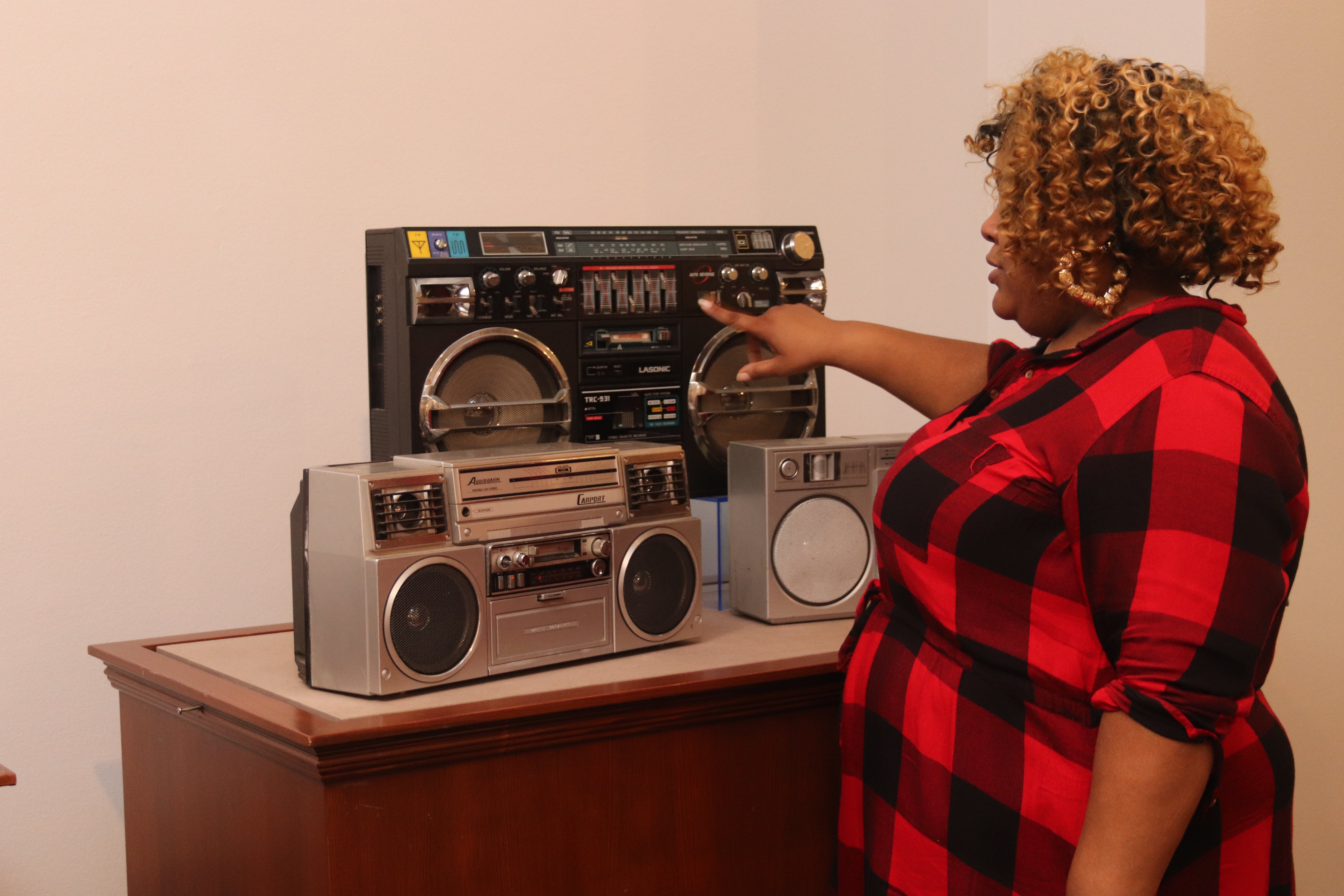 Mandy Shoptaw, deputy chief of communications for the state Division of Arkansas Heritage, which oversees the museum, notes that hip-hop tends to be known for its negative aspects — "the bad words, sex and violence. But this is really an exhibit for all ages."

A number of related activities are being held for all ages. These include lectures, a sneaker designing class for adults and older kids, and a poetry workshop "because poetry dovetails into hip-hop so beautifully and just takes it to the next generation," Shoptaw says.

Like Bradford, Shoptaw wasn't allowed to listen to the music growing up.

But now, "I do find it, like today as an adult, if I'm in a bad mood, I'll turn on my hip-hop station on my radio, and there's just something about it. It's very — I think it's just the beat and the energy, and it always just elevates."

Print Headline: To the beat