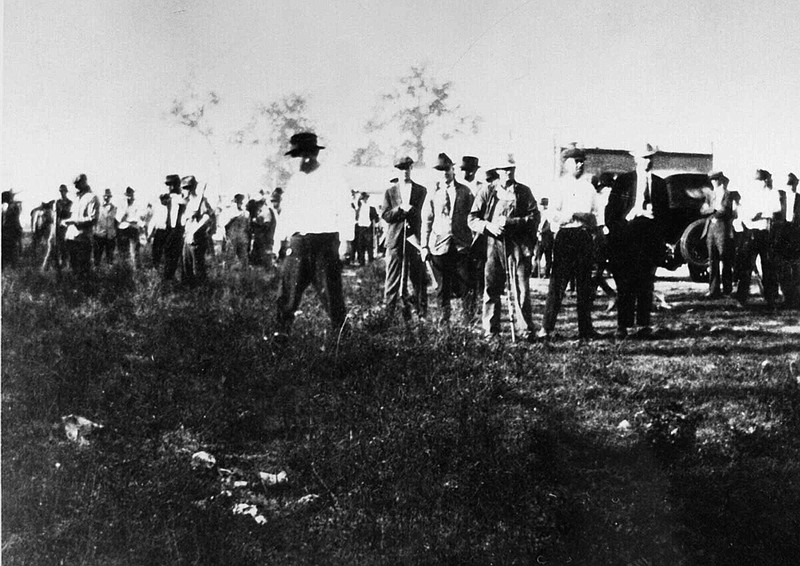 Unidentified white posse members hunt for black men who had taken refuge in a field in Elaine in this photo taken in late September or early October 1919. The events in Elaine had for years been referred to as a race riot in which black sharecroppers and white farmers battled and then-Gov. Charles Brough declared martial law, but it is now more commonly called a massacre in which 100 people, and perhaps as many as 800, were killed. (AP/Governor Charles Brough Scrapbook, Arkansas History Commission, File)

A change at the Library of Congress to use "Elaine Massacre" as a research subject heading more accurately describes the racially-motivated killings of Black residents in 1919, historians and descendants said.

The library, which describes itself as the world's largest, previously used "Elaine Race Riot" as its main subject heading for materials related to the violence committed by white mobs in eastern Arkansas.

"When we're living with the loss of resources and the loss of everything we had, it's very difficult to see that as a 'riot.' It was a deliberate attempt to terrorize us," said Faye Duncan-Daniel, 78. The violence resulted in her family's land being seized, she said.

"In naming an event, one of the fundamental principles that the Library of Congress uses is to call a thing by the name by which it is most commonly recognized," Ryan said in an email.

The change comes after a formal proposal submitted last year by the University of Oklahoma, but Duncan-Daniel noted efforts by many to shift the language used to describe the violence.

She recalled having conversations back around 2007 with historians and other descendants in which they used the term "massacre" rather than the once-common "race riot." Duncan-Daniel said she was born near Elaine, but left as a teenager and lived in Nevada before returning to Arkansas in 2006.

"The name change was our perspective on the event, because we have been minimized enough," Duncan-Daniel said. Using the term "massacre" is "one of the ways that we're starting to take back control of our narrative," she added.

James White, co-founder of the Elaine Legacy Center, said he remembered his grandparents telling him how all Black people in the area were in danger.

"I always heard them, 'If you were Black, you were fair game.' Shoot and kill is what they were doing to black people," White, 59, said. "Women, children – they was just shooting and killing."

White said "massacre" is a better term than "riot" to describe what took place, though he also said another word might be used.

"I think it was so many people that got killed – from the oral history – that you can almost say it was genocide," White said.

Efforts are ongoing to raise money for a museum in Elaine to present a fuller account of the massacre, White said.

The Library of Congress followed its formal review process in approving the subject heading change in September to "Elaine Massacre, Elaine, Ark., 1919," Ryan said, as the University of Oklahoma proposal "cited research to indicate that massacre was now the more commonly used term in the name of the event."

Nan Elizabeth Woodruff, a professor emerita of African American studies and modern U.S. history at Pennsylvania State University who has written about the Elaine Massacre, called the Library of Congress the "gold standard."

"It's very prestigious, and what it says or does matters, so I think this is symbolically very important," Woodruff said.

Woodruff referred to accounts of similar racial violence taking place elsewhere in that era of American life, including in Tulsa in 1921.

"The same narrative is coming out of all of these, which is white people organizing to kill Black people," Woodruff said.

Historians of the events at Elaine and in Phillips County say that stories at the time misrepresented the white-led violence as all done in reaction to a purported "rebellion" or "uprising."

Black sharecroppers and tenant farmers had organized to improve their working conditions. After an initial skirmish at a Black farmers' church meeting in which a white officer was killed, mobs hunted down Black residents for days, according to historians.

But the initial violence had previously been portrayed as having begun after a vehicle just happened to break down in the area of the farmers' meeting, said Brian Mitchell, an associate professor of history at the University of Arkansas at Little Rock.

Mitchell said records show that planters knew of the Black farmers' efforts to organize. Authorities involved in the early violence also were with a Black prison trustee, he noted.

"The idea that these police just by chance had car trouble 100 or 200 yards away from this church, that's not likely," Mitchell said. "And why do you have a trustee out of the prison with you? In all likelihood, the trustee was with them to try to find where the church was in the middle night."

The Central Arkansas Library System Encyclopedia of Arkansas states that "accounts of who fired the first shots are in sharp conflict."

The military's role in the racial violence has also come under scrutiny, as they arrived in the area and rounded up Black citizens for arrest after Gov. Charles Brough asked federal authorities to send in troops.

Though 12 Black men were sentenced to death after the violence, a legal effort supported by the NAACP led to the men being freed.

Mitchell said the term "massacre" is appropriate given the unprovoked attacks experienced by many Black residents and the large loss of life.

The term "race riot" has a long history of usage.

Black journalist Ida B. Wells-Barnett traveled to Arkansas to interview the Black men condemned to death. Her reporting refuted the idea that Black residents plotted a rebellion, instead describing the farmers as organizing to try to improve their economic fortunes. Her work, published in 1920, had the title, "The Arkansas Race Riot."

Mitchell said scholars have worked to change the language used in describing the racial violence in Arkansas and elsewhere during this era, including author Grif Stockley, who used the term "race massacres" in the title of his book on Elaine, first published in 2001.

Using the term riot implies "that there's some blame that can be cast on both sides," Mitchell said.

For the many Black citizens facing violent mobs in 1919, "not only do they not know they're going to be attacked, but often the people who are expected to protect them are part of the mob attacking them," Mitchell said.

White, an Elaine resident, believes the total is even higher.

"Nobody has just really came to Elaine and sat down with older people that know this, that lived this stuff," White said.

Michael Wilson is director, co-writer and producer of a forthcoming film, "We Have Just Begun," that includes interviews with descendants and others.

"I call the event a Massacre and Dispossession, due to the clear origin of the conflict in white ruling class efforts to maintain total control," Wilson said in an email.

In Oklahoma, commissions have been convened to study the racially-motivated violence in Tulsa.

"I wish that Arkansas would take the position that Tulsa has in regards to what happened in Phillips County and open a commission and, more importantly, fund that commission to bring in experts in the field and begin trying to find the remains of people so they can ascertain what actually took place," Mitchell said.

Jenny Watson, head of storage and delivery for University of Oklahoma libraries, said in an email that a Metadata Justice working group at the university earlier had successfully requested that the Library of Congress use "Tulsa Race Massacre" as a subject heading rather than "Tulsa Race Riot."

As part of the effort to change the subject heading, University of Arkansas libraries were asked to help with the submission to the Library of Congress, Watson said.