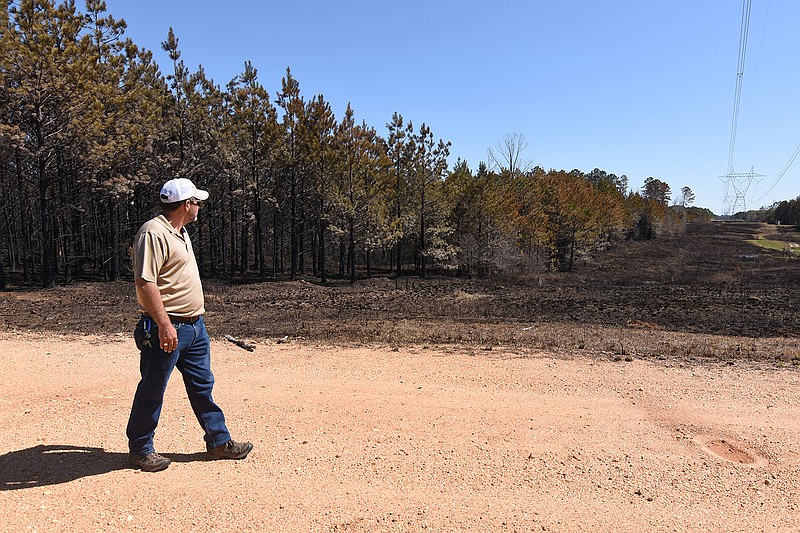 District forester John Cook looks out over an area Thursday, April 15, 2022 that was affected by the wildfire that occurred the previous Sunday in Grant County. (Arkansas Democrat-Gazette/Staci Vandagriff)

SHERIDAN -- Richard and Loretta Gillis fled their Grant County home on the afternoon of April 10 with nothing but their Chihuahua to escape a forest fire that would reach within 500 yards of their house.

"My wife was going to go get groceries, and [law enforcement] turned her around and said, 'Ma'am, we're getting all the firetrucks we can,'" Richard Gillis said. "She came back up here, and she was shaking and said, 'I'm scared, Richard.'"

Amid thick smoke, they left for his sister's house in Sheridan to spent the night.

The couple was one of more than 20 families ordered to leave their homes on Grant County roads 51 and 57 when a wildfire of a rare magnitude crawled toward the residences in the rural area just north of Sheridan.

First responders spent almost 12 hours fighting the fire, from Sunday afternoon to early Monday, and managed to extinguish it with no injuries to people or damage to structures.

The Forestry Division of the state Department of Agriculture is investigating the cause of the fire, which burned 1,503 acres, division director Joe Fox said.

As of Friday afternoon, more acres of Arkansas land have burned this year than in each of the past three full years, according to data from the Forestry Division.

Fox and Grant County Emergency Management Director Randall Berry agreed that the April 10 wildfire was unusually large for the region and the state. They said the speed and shifting directions of the wind, which exceeded 30 miles per hour, were driving factors in the size of the fire.

"There's several pieces to the puzzle, and the weather is three or four pieces," Fox said.

Apart from the Forestry Division, 18 fire departments, the Arkansas Game and Fish Commission, the Grant County sheriff's office and the Sheridan Police Department all responded to the wildfire, Berry said.

The fire left swaths of land and trees burned, with the smell of char still present Thursday. Some trees, mostly pines, were blackened around the stumps but still alive with green needles. Others were burned enough that their needles had turned brown.

Randy Ingle's house on Grant County Road 51 was a "hub" for firetrucks to restock on water, thanks to the water plug in the yard, he said.

Ingle and his wife, Christi, were in Saline County when a friend called them about the fire and evacuation order. They came home and loaded five horses, two dogs, a cat and some valuables into their vehicles and drove to Ico in northern Grant County to stay at a friend's sister's house, Ingle said.

He said he was grateful for the aid of friends and neighbors during a crisis.

"[I felt] an appreciation that when you're in trouble, you've got good friends to help you out, but still you're in that panic mode because you're in a rush to get out, and you don't know when you leave if you're even going to have a house when you get back," Ingle said.

Most of the past decade has seen "very, very wet" weather in Arkansas, leading to fewer wildfires and fewer acres burned than in the previous decade, Fox said.

Arkansas historically sees the most wildfires in March every year, according to the data. Troy Wood, a Forestry Division ranger for Grant County, said the other wildfire seasons of the year tend to be January, which brings dry cold fronts, and from July to September, which bring heat and humidity.

Grant County had 240 wildfires from 2013 to 2019, the fifth-most in the state behind Hot Spring, Saline, Miller and Izard counties, according to the data.

In 2017, 27,549 acres burned, making it the exception to the lower risk of wildfires in the past decade. At least 30 wildfires occurred on Feb. 12, 2017, "aided largely by very dry air and gusty winds behind a cold front," said Brian Smith, a senior forecaster at the National Weather Service in North Little Rock.

The primary weather conditions that put forests at risk of wildfire are low humidity and high winds, Smith said. High temperatures add to the risk but are not always present.

The three necessary ingredients for a fire -- the "fire triangle" -- are heat, oxygen and fuel, said Wood. Fuel includes grass, sticks, undergrowth and other plant debris that could be a fire hazard if it accumulates and becomes too dry.

"If it hadn't rained, the brown needles that had been killed due to the fire -- any wind could knock those on the ground near a stump hole or a burning log and start burning again," he said.

Arkansas and other southern states are less at risk of wildfires than western states with drier climates, such as California, Fox said. However, the April 10 fire was unusual because it continued after nightfall as the wind continued after sunset, he said.

Not all wildfires are recorded in state data, Fox said, because some are small and easily extinguished.

"Anecdotally, there's something like five fires that a volunteer fire department goes to for every one that we get reported to us," he said. "Those might be half an acre, and they put water on it and there's no point in reporting it."

While the 18 fire departments that responded to the April 10 wildfire doused the blaze with water on multiple fronts, the Forestry Division tried to get ahead of the fire and create "fire lines" by clearing vegetation out of a fire's path in an attempt to stop it in its tracks.

"Sitting in a dozer, no matter how high the air conditioning is turned up, when you get close to that fire, it's like sitting in front of a hairdryer," Wood said. "You're just trying to stay safe and put the fire out while watching everything that's around you."

Wood was one of the incident commanders in charge of the response to the wildfire. He communicated with the single-engine air tankers that dropped water on the fire from directly above it 16 times, he said.

The combined efforts of the air tankers and volunteer fire departments kept the fire from reaching Corinth Church on Grant County Road 57, Wood said, while the trees and ground just yards away from the building were burnt.

Bonita and Otis MacNeill live on Grant County Road 57, and they went to their daughter's house early that afternoon and returned around 8 p.m., only to be told they needed to evacuate again, Bonita MacNeill said.

"It was kind of weird [to have to leave], but we were kind of expecting it because we ate lunch on the back porch, and we could smell the smoke and we heard sirens," she said.

Evacuation was voluntary at first, Berry said, but became mandatory after 3 p.m.

"We certainly didn't want to inconvenience people and have them leave their homes without an actual threat, but with how fast the fire was spreading, we thought we should get them out before it was too late," Berry said.

The Grant County wildfire led to only the second mass evacuation in the decade that Fox has worked for the Forestry Division, he said. The first was outside the small Yell County city of Ola in 2012.

The MacNeills, the Ingles and the Gillises said they have all lived in their community for more than two decades and have never seen anything like the April 10 wildfire before.

The Gillises returned home Monday morning to find everything as they had left it, apart from the tire tracks left by a firetruck that parked near their house and fought the fire from that vantage point.

"When you live in this area, you always think about forest fires, but that's the first one we've had since I've been here," Richard Gillis said. "We've always had little fires, but nothing like that."