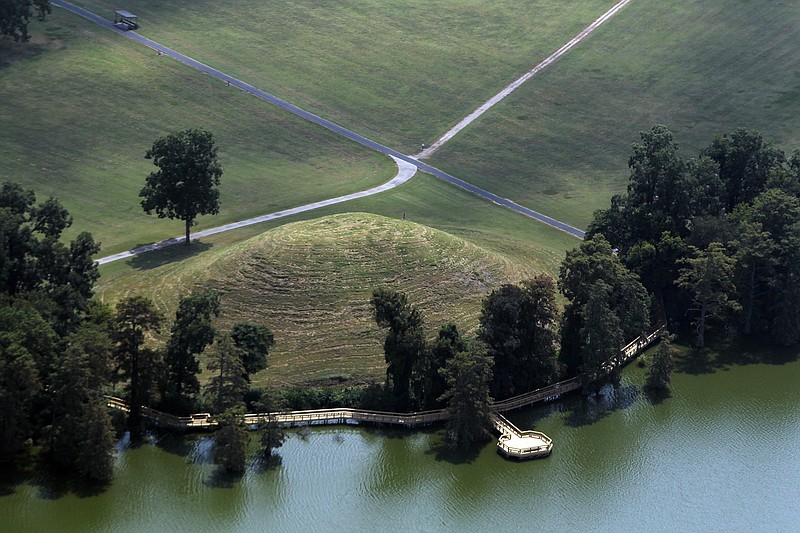 The rounded mound, believed to be a burial site, is seen in an aerial photo taken in 2013. (Democrat-Gazette file photo)

TOLTEC MOUNDS ARCHEOLOGICAL STATE PARK — For four decades, one of Arkansas' most important and intriguing prehistoric sites has welcomed visitors to a state park with a wildly inaccurate name. Now officials are mulling a possible change to that misguided nomenclature.

Toltec Mounds Archeological State Park, about 20 miles southeast of Little Rock, carries the name of a civilization that existed from the 10th to 12th centuries in present-day central Mexico. The Toltecs lived more than a thousand miles south of their namesake Arkansas location.

As a sign in the park's visitor center explains, "a common belief in the 1800s was that local Indians were not civilized enough to build mounds. The builders of the mounds were mistakenly thought to be people from Mexico, such as the Toltecs, and this site was given the name Toltec.

"Later investigation revealed that the mounds were not built by the Toltecs but by the highly organized ancestors of local Indians. Archaeologists have named these ancestors the Plum Bayou People." 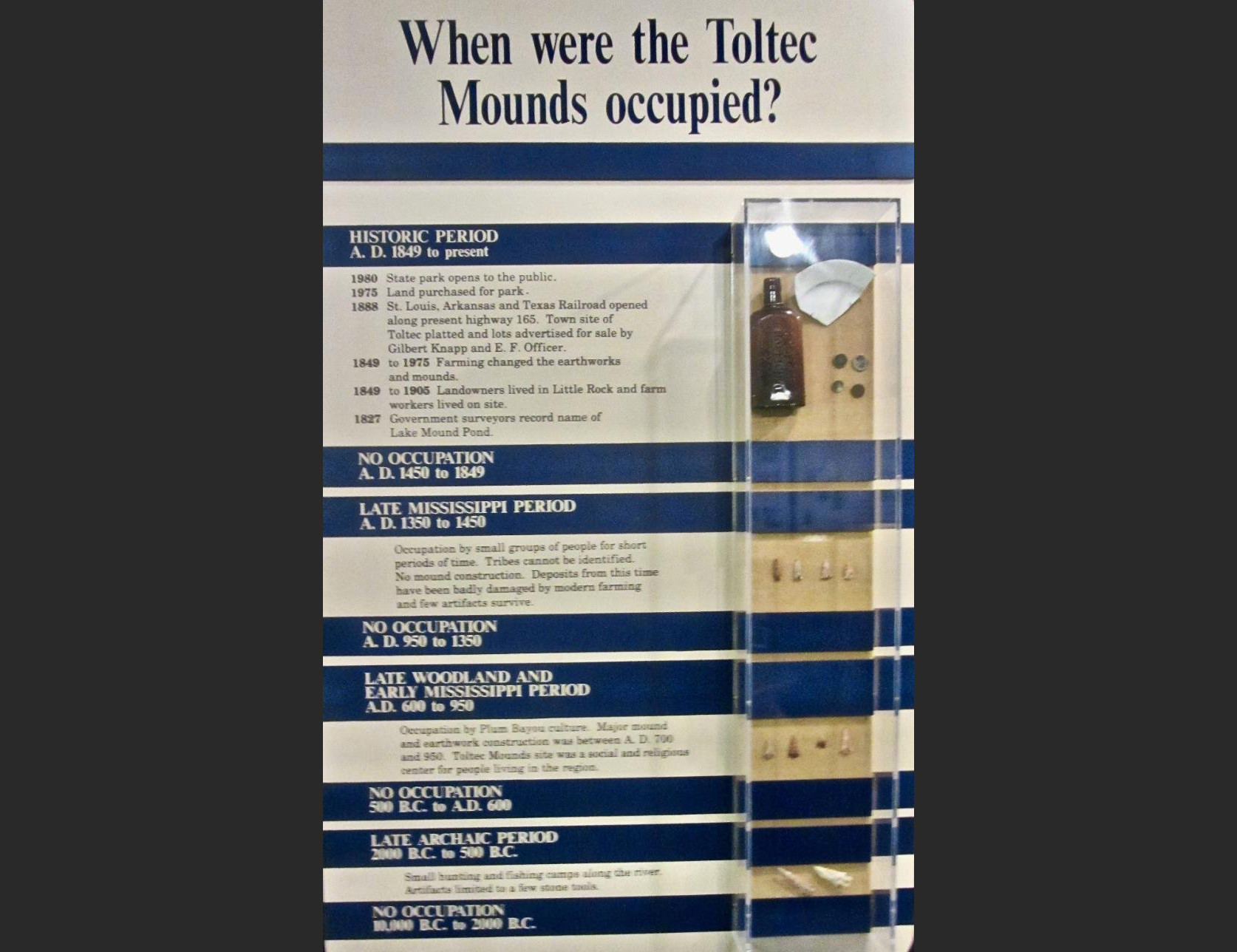 The chronology of habitation is charted in the Toltec visitor center. (Special to the Democrat-Gazette/Marcia Schnedler)  Exhibits provide details about the Plum Bayou culture, which occupied Central Arkansas from the 7th to 11th centuries. Other displays describe 19th-century exploration of the site, confusion about the mounds' provenance, damage done carelessly to some of the earthen structures, and development of the state park.

A brochure available at the visitor center maps the park's two main paths, with numbered markers along the way describing the remaining mounds and other features. Walking the Knapp Trail, the shorter route at three-quarters of a mile, gives a close-up look at the layout.

According to the brochure, "Archaeologists believe only about 50 people lived within the boundaries of this site. These individuals are thought to have been the religious and civic leaders of the Plum Bayou people. The general population, it is believed, lived in scattered villages and farmsteads in the surrounding area."

In a way, the Plum Bayou upper crust created an early semblance of a gated community. The leaders dwelt in privacy behind a 10-foot-high earthen wall. It's likely, according to the brochure, that only several times a year would ordinary citizens have been admitted "for special ceremonies and to renew social and family ties."

The origin of the state park’s name is explained in the visitor center. (Special to the Democrat-Gazette/Marcia Schnedler)  Of the 18 prehistoric mounds that have been detected here, only three still stand tall, while most of the others were leveled by farming in modern times. The tallest, labeled Mound A and rising to 49 feet, is flat on top and believed to have served as a platform for a temple or house. Mound B, 39 feet high, probably had a similar function.

The third, Mound C, is much lower and rounded on top. Archaeologists determined decades ago that it is a burial site, making it off-limits for digging under a 1991 state law that forbids any disturbing of American Indian graves.

The notion of changing the state park's name came up in last year's regular session of the Arkansas Legislature. State Rep. Justin Gonzales, R-Okolona, introduced a bill to rename it Chief Heckaton Archeological State Park, in honor of a tribal leader during the 19th-century period when Quapaw lands were being taken away by white settlers. The bill died in a House committee. 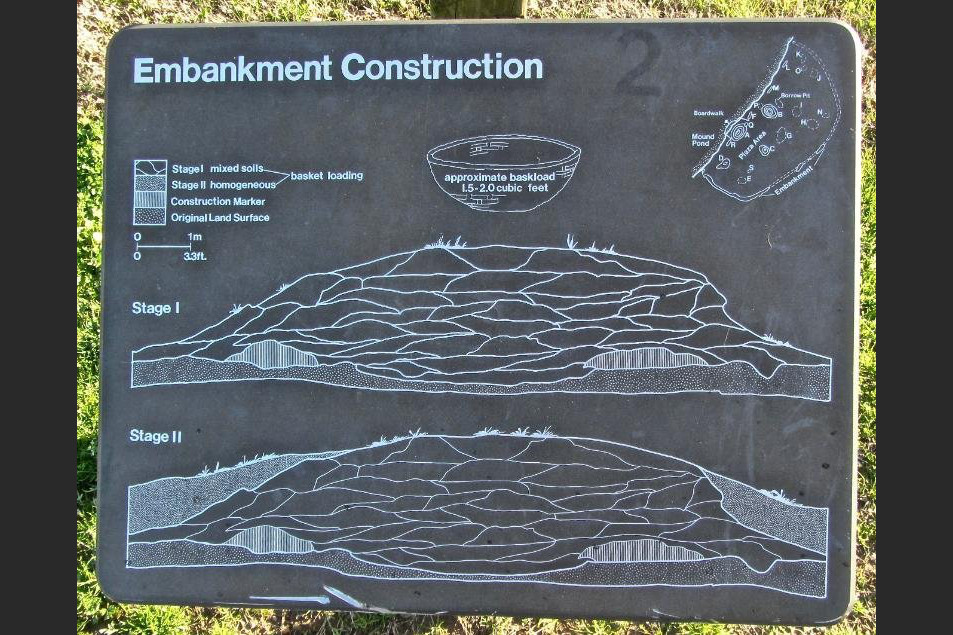 How the Toltec embankment was built is explained in the park’s visitor center. (Special to the Democrat-Gazette/Marcia Schnedler)  Although "Chief Heckaton" would be less of a misnomer than "Toltec," it would also have nothing to do with the Plum Bayou people who lived in the area nearly a millennium earlier. In fact, a good case could be made that an apt name would be Plum Bayou Archaeological State Park.

Print Headline: A rose by any other name