Dollarway's Collins to play in Illinois 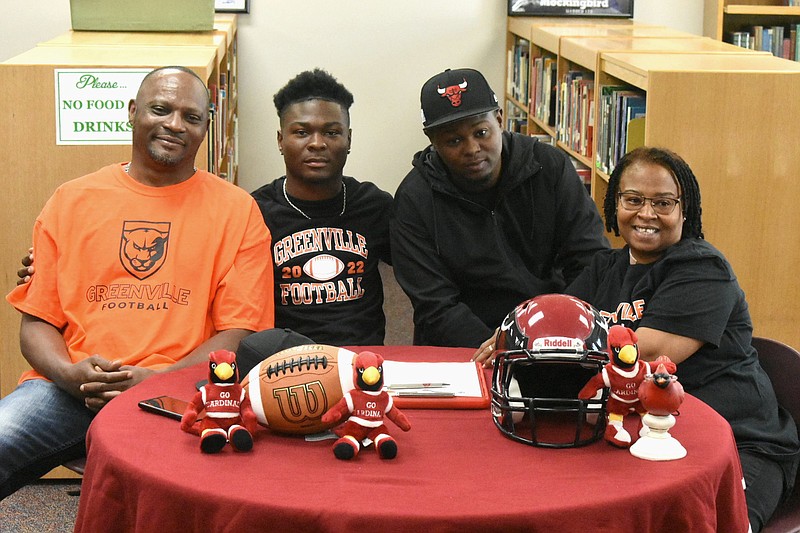 Martese Henry allowed his assistants to speak before him, but that didn't give the Dollarway High School football coach enough time to fight back tears of joy when talking about Eddie Collins Jr.

"He means a lot," Henry said. "When you see a young kid who came from a situation he came from -- always had the mindset to be the best, to do the best despite any adversity -- I always commended him. I always had a heart for him. Never let me down in any aspect. Anything I asked him to do, he did it to the best of his ability."

So, it meant a lot for Henry to see Collins sign a letter of intent with Greenville (Ill.) University, a Division III school in the southwest part of the state.

"To start off from the ground up, my auntie helped me," said Collins, whose aunt and uncle Marchella and Cedric Carter and cousin Khalil Carter joined in the celebration. "I just want to thank my Lord and savior and my mama and family and everyone around me for supporting me. My mom always told me, 'You can play on the field, but the classroom is going to help you.' She forced me to have a good GPA, which would save me a lot [of money]. I was good, but my size kind of hindered me."

Greenville won the Upper Midwest Athletic Conference championship with an 8-3 record. Collins, 5-feet-9 and 170 pounds, said he chose the Panthers after Coach Robbie Schomaker wanted to know him as a student and not just as a player.

"He wanted to know what was my mindset, what did I want to be after college if I didn't continue my career on the field," Collins said. "That's why I loved it. I don't want to be somewhere where they just want me to play football, but they want to make sure I become a man to where I need to be in society."

Greenville is also where Dollarway graduates Terrance Brown and Cherondric Broyles are continuing their football careers.

Collins moved up to the varsity as a freshman and made four straight state playoff appearances. As a senior, he led the Cardinals with 102 yards and 283 all-purpose yards.

He wants to graduate with a degree in clinical psychology to open up mental health clinics in low-income areas.

"On the field, I want to be the best at the D-3 level to where people feel like I shouldn't be there, but I'm there," Collins said. "That's what I'm looking for."