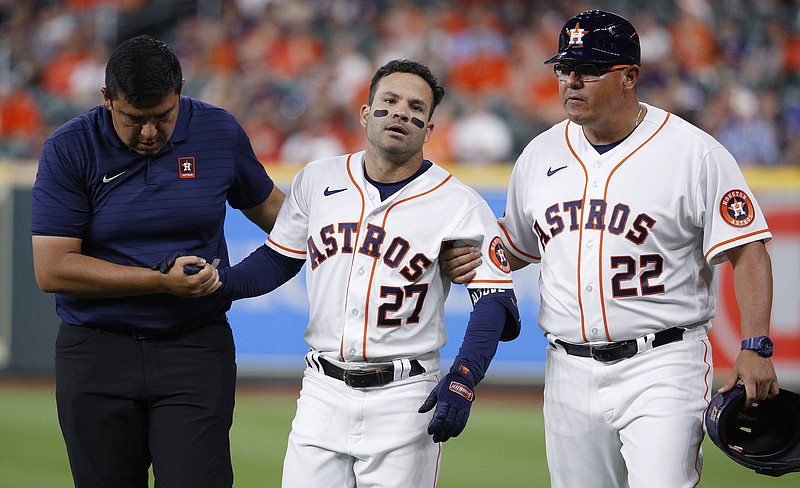 Houston Astros' Jose Altuve, center, is helped off the field after legging out an infield single in the bottom of the eighth inning against the Los Angeles Angels, Monday, April 18, 2022, in Houston. (Kevin M. Cox/The Galveston County Daily News via AP)

The game started at 11:11 a.m. Eastern, played in conjunction with the 126th Boston Marathon, which ended about one mile from Fenway Park.

"I think I definitely gave us a little bit of momentum there in the beginning," said Garlick of his first-inning home run off starter Rich Hill. "I just wanted to make sure I got a good night's sleep because it was an early game today. I don't mind the day games. I'm more of a morning person."

Polanco added a two-run single in a four-run eighth inning and Gio Urshela had three singles for the Twins, who won the series finale for a four-game split.

Christian Vazquez hit a solo homer and Xander Bogaerts had three hits with an RBI for Boston, which heads to Toronto today.

Bundy (2-0) gave up one run and five hits in 51/3 innings with six strikeouts and no walks. In his Twins' debut against Seattle on April 11, he pitched five shutout innings after signing a $4 million, one-year deal as a free agent on December 1.

"This game's hard to play. It's 11 a.m. It's early," Bundy said. "It's always nice to have the guys swinging early and getting that early run support."

A few minutes after fans were turning on the back of the Monster attempting to get a glimpse at the men's leaders of the race heading toward nearby Kenmore Square, Polanco hit his drive into the second row of seats off Hill (0-1) that made it 4-0 in the third.

ASTROS 8, ANGELS 3 Yordan Alvarez homered twice after missing five games because of covid-19 protocols, and the Houston Astros beat the Los Angeles Angels in their home opener while losing Jose Altuve to injury. Altuve fell to the ground after legging out an infield single in the eighth inning. Alvarez hit a 417-foot shot to the second deck off Michael Lorenzen (1-1) in the first inning, scoring Michael Brantley. Another two-run blast in the seventh made it 7-3.

BREWERS 6, PIRATES 1 Christian Yelich belted a grand slam for his first home run of the season and Milwaukee beat Pittsburgh. Yelich's two-out slam capped a five-run rally off Pirates starting pitcher Zach Thompson (0-1) in the fourth inning. The 429-foot blast was Yelich's fourth career grand slam. Eric Lauer (1-0) gave up one run and five hits in six innings while striking out five and walking one. Pittsburgh got its only run in the fourth on rookie Diego Castillo's first career homer, which came one pitch after Castillo swung at a slider from Lauer that hit him in the knee.

ROCKIES 4, PHILLIES 1 Chad Kuhl pitched six scoreless innings during his home debut with the Rockies before leaving with what appeared to be a cut near the middle finger of his pitching hand, and Charlie Blackmon hit a go-ahead home run to lead Colorado past Philadelphia. Kuhl (1-0) allowed a pair of singles, struck out four and walked one, throwing 42 of 68 pitches for strikes. He went to the mound to warm up for the seventh but didn't start the inning.

PADRES 4, REDS 1 Manny Machado had a two-run home run among his three hits and Sean Manaea pitched six strong innings for the San Diego Padres, who handed the Cincinnati Reds their seventh consecutive loss. The Padres extended their major league record with 12 straight errorless games to open a season.

CUBS 4, RAYS 2 Rookie Seiya Suzuki extended his hitting streak to nine games, tying Akinori Iwamura for the longest by a Japanese-born player at the start of a major league career, and the Chicago Cubs beat the Tampa Bay Rays. Suzuki singled to left leading off the fourth inning, matching the mark that Iwamura set with the Rays in 2007 and tying Andy Pafko's record for a Cubs player at the start of his career, set in 1943. Suzuki was thrown out by left fielder Randy Arozarena trying to stretch his hit to a double, a call upheld in a video review. Keegan Thompson (2-0) struck out five in 32/3 innings while allowing one hit in relief of Kyle Hendricks. Hendricks allowed 2 runs on 5 hits in 41/3 innings.