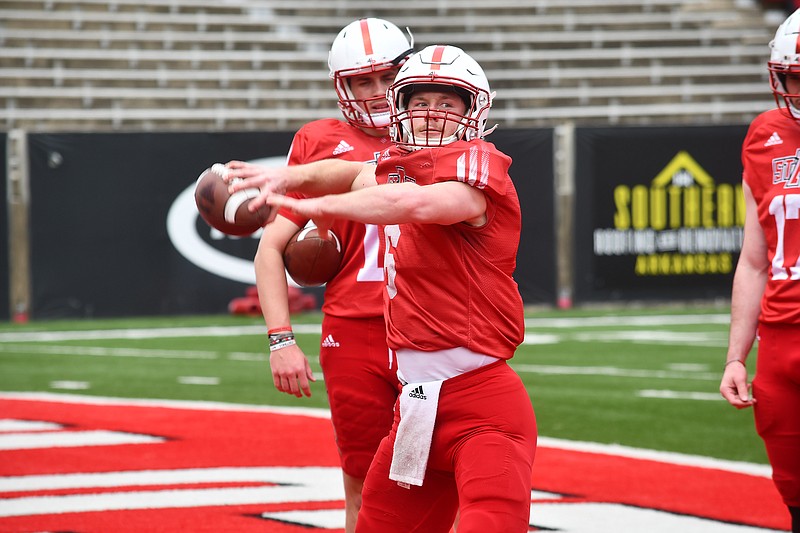 JONESBORO -- It's easy to pick out the new guy at wide receiver.

His white jersey is relatively clean, his black No. 6 not yet faded. There aren't rips in the shoulders from mixing it up in the slot -- at least not yet.

Expecting Wyatt Begeal to keep the uniform that pristine is unrealistic.

"You've got to be able to adjust. Football is not a perfect game," Begeal said after Tuesday's practice.

The former three-star prospect is making a significant adjustment during the late stages of Arkansas State's spring camp, slipping on the gloves and sliding over from quarterback to wide receiver. It's a transition made all the more possible by rapid ascendancy of true freshman quarterback Jaxon Dailey as well as the addition of former Miami (Ohio) signal-caller A.J. Mayer -- a move that, although not formal, was announced by Mayer on Twitter Tuesday morning.

Begeal taking snaps at wideout was a decision that came last week. The Cibolo, Texas, native said he was in his dorm room between classes last Tuesday when Coach Butch Jones called to inform him that he'd be catching passes rather than throwing them that afternoon in practice.

Jones said the move immediately changed the tenor of that session.

"He's come to me a number of times and said, 'Coach, I want to help the team. I'm willing to do anything and everything you need me to do,' " Jones added. "He ignited the entire practice, made some big plays."

Late last season, Jones mentioned the possibility of Begeal taking snaps at running back. Though it never came to fruition, the idea of finding a way to get the 5-11, 205-pounder on the field was there.

Saenz told the Arkansas Democrat-Gazette that he'd have put Begeal at linebacker if that's what it took to get him on the field.

"When it comes to his work ethic and the way he prepares, it's pretty amazing the amount of time and focus he has to be successful," Saenz said. "He's probably the most unselfish person that I know."

Begeal's habits have traveled to Jonesboro. Jones noted that Begeal is often at the Red Wolves' facility late, studying offensive and defensive film as well as special teams.

In Tuesday's practice, Begeal was one of the holders with the field-goal unit and was on punt coverage.

Even in just his second season, Begeal is regarded as one of ASU's leaders. When he found the end zone during a red-zone drill Tuesday, there was hollering from both the offensive and defensive sidelines.

Of the others who saw meaningful action last year, only Adam Jones has more college experience than Begeal -- even if he was at a different position.

Still, the move comes with a learning curve -- although Begeal knows the offense, he is working on the finer elements of playing wide receiver. Begeal said everyone has been giving him pointers over the last week but pointed to classmate Reagan Ealy as someone who has been particularly helpful since Ealy and Begeal will both work primarily as slot receivers.

"Every time we come to the sideline, he's coaching me up," Begeal said of Ealy. "You're out there [as a quarterback] and you're like, 'Hey man, I need you there.' But when you're actually doing it [as a receiver] and you see how much of a load those guys take on their legs every single day, you get to embrace it and respect them even more."

There is a plan to develop a package for Begeal at quarterback, even with James Blackman firmly holding onto the No. 1 job.

But Begeal's transition speaks more to where ASU stands in terms of pass-catchers. Although there is depth at tight end and in the slot, there's a dearth of weapons on the outside.

Monday's addition of Oregon State transfer wideout Champ Flemings won't resolve that issue. Nor does Begeal's presence among the group.

Offensive coordinator Keith Heckendorf said he isn't overly concerned about the wide receiver position, though, as the Red Wolves wrap up their spring camp with one final practice Thursday before Saturday afternoon's spring game.

"Guys like [Wyatt] you appreciate and you want to find roles for them," Heckendorf said. "If you want to sit there and pound a square peg into a round hole, that gets frustrating after a while, so you've got to be able to adapt and put [the guys you have] in a position to be successful."