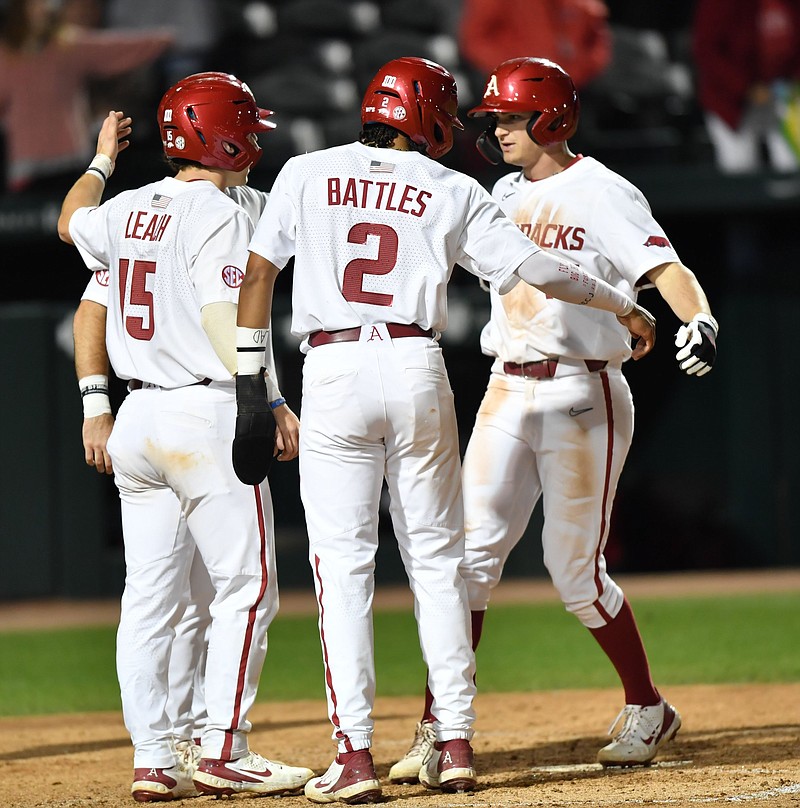 Slavens went 4 for 5 with a grand slam to help power the No. 3 Razorbacks to a 10-1 victory over Arkansas State University at Baum-Walker Stadium.

After Slavens started the season batting .187 (14 for 75), Razorbacks Coach Dave Van Horn decided to sit him down for three games.

"On the mental side of it, I think he finally just said, 'Heck with it. I've got to quit beating myself up over every bad at-bat I have,' " Van Horn said. "And realize just work and maybe let the game come to him a little bit, start staying in the zone more."

Slavens, a senior from Olathe, Kan., said the short break from playing was a positive.

"It's just not thinking about it too much lately, just stringing together good at-bats since then."

Slavens batted .263 with 14 home runs and 63 RBI for Arkansas last season after transferring from Johnson County (Kan.) Community College. He batted .507 for Johnson County in 2020.

"I'm getting back to playing like myself, like I always have been," Slavens said. "Having fun and cheering on your teammates, a lot more, more than yourself.

"It's just playing with more of an edge I think."

The left-handed hitting Slavens has raised his batting average to .292 and has 8 home runs and a team-leading 39 RBI.

Slavens' grand slam that put Arkansas (29-7) ahead 10-1 in the seventh inning against ASU (7-25) went to the opposite field over the left-field fence into the Red Wolves' bullpen.

"What I like about it is he's using the whole field," Van Horn said. "He's not just pulling the ball. He's getting some two-strike hits, he's going the other way."

Slavens hit leadoff singles in the third and fifth innings and scored.

"Just happy for him," Van Horn said. "We needed him. We told him that when he was struggling, that we needed him to get it going and he's done it."

Second baseman Robert Moore's two-run home run in the first inning put the Razorbacks ahead to stay at 2-0.

Griffin struck out Brandon Hager with the bases loaded to end the game.

Trest walked the bases loaded with two outs in the fifth inning, but Adamiak came in and retired Ben Klutts -- ASU's No. 3 hitter -- on a popup to Peyton Stovall at first base to keep the Razorbacks ahead 3-1.

Arkansas took a 2-0 lead in the first inning against ASU starter Carter Holt when Michael Turner hit a two-out single and Moore followed with his fourth home run of the season on a line drive he pulled over the right-field fence.

ASU made it 2-1 with an unearned run off Ramage in the second inning.

Jaylon Deshazier hit a ground ball with two outs to normally sure-handed Battles, who bobbled the ball trying to field it.

After Deshazier reached first base on Battles' third error of the season, he advanced to second on a wild pitch by Ramage. Cooper Tremmel then hit an RBI single.

"I've just got to keep it going," Slavens said. "Keep having good at-bats.

"Might have got all my bad at-bats out of the way. So I just need to keep playing hard and hit the ball hard. That's all you can do, and see where it goes from there."