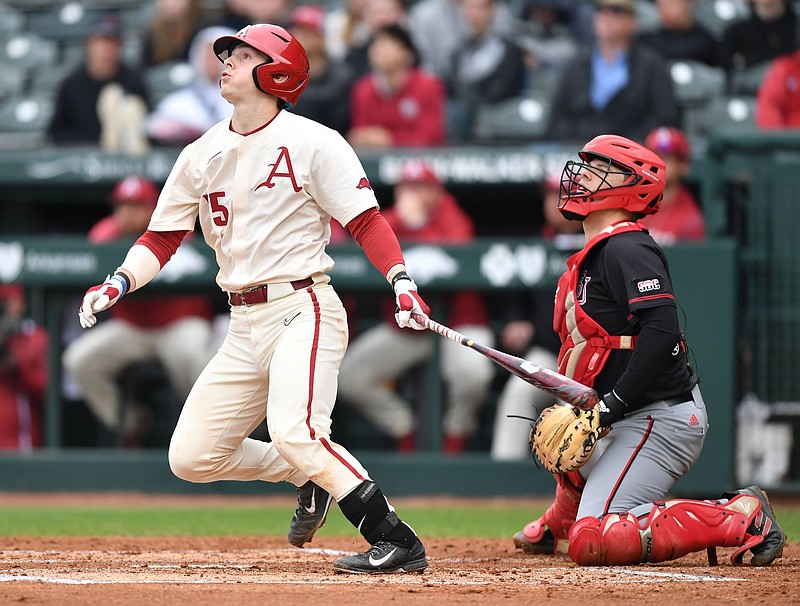 FAYETTEVILLE — The Arkansas Razorbacks doubled their win total against Arkansas State this season with the aid of a doubles barrage on Wednesday.

The No. 3 University of Arkansas slugged six doubles and reserve catcher Dylan Leach homered again en route to a 10-3 win over the Red Wolves before an announced crowd of 9,002 at Baum-Walker Stadium that was considerably less than that.

The Razorbacks (30-7) won their 13th in a row against in-state competition and improved to 6-0 this season against them by a combined score of 78-21 while racking up their 17th straight mid-week win.

“Just glad that’s over with and we can move on and get to conference, honestly,” said Arkansas Coach Dave Van Horn, who posted his 1,100th win as a major college coach. “We just played solid. Solid defense. The game got kind of long there towards the end. We didn’t throw enough strikes one inning and it cost us a couple of runs, but overall I thought our pitchers did a nice job.” The Red Wolves (7-26) lost for the 22nd time in their past 25 games after opening 4-4.

Jalen Battles and Jace Bohrofen had a pair of doubles each, while Cayden Wallace and Robert Moore had one double apiece.

Leach, who hit for the cycle with a pair of home runs against the University of Central Arkansas on April 5, led the Razorbacks with 3 RBI.

“I think he’s been swinging the ball well in midweek games,” Van Horn said. “He’s been swinging the bat well in practice. … I think he’s been steady behind the plate. He’s just developing a little bit there. And he’s a guy I wouldn’t have a problem catching in a conference game or bringing him off the bench to pinch hit.” Freshman Kendall Diggs, making his eighth start and playing first base, went 3 for 3 with a pair of RBI.

“It was awesome,” Diggs said. “It’s always a blessing to get out there and get the opportunity to play, so I’m just happy I could help the team win.

Sophomore right-hander Will McEntire had his second strong mid-week start in a row for the Razorbacks, coming up one out shy of getting credit for the win. The 6-4 right-hander from Bryant gave up a run on 3 hits and 4 walks and struck out 5 in 4 2/3 innings and got out of the third and fourth with ground ball double plays.

“Really loved the defense behind me,” McEntire said. “I didn’t have my best stuff today, but the two double plays were huge and confidence-boosting.

“Really, I was just waiting for the chance. I knew once I was given the opportunity that I could run with it.” Van Horn said McEntire threw “great” last week in a win over Arkansas-Pine Bluff and “good” against the Red Wolves.

“You take away maybe two of those walks, I think he had a really good outing,” Van Horn said.

The Bryant product allowed an RBI single to Jared Toler as his final batter after throwing 77 pitches. Heston Tole (1-0) struck out three while getting four outs and picked up the win.

Arkansas State’s two runs in the seventh off Gabriel Starks on bases-loaded walks by Toler and Jacob Hager snapped a streak of 23 2/3 innings by the Arkansas bullpen without allowing an earned run. The streak stretched back seven games to the series finale at Florida on April 9.

The Razorbacks got all the runs they would need in the second inning with a three-run spree off lefty Jakob Frederick (0-2). Battles opened the uprising by legging out a double to left field, his headfirst slide just beating the throw from Jaylon Deshazier.

“Just trying to play hard, that’s all it is to me,” Battles said of his hustle doubles. “It felt great just having that cushion early, so our pitchers could go out and do what they do.” After Bohrofen drew a walk, Braydon Webb’s fly ball chased Battles to third and Diggs’ sacrifice fly brought him home. Leach followed with a high drive to left field that just cleared the wall and landed in the visitor’s bullpen for his third home run of the season.

Doubles by Battles and Bohrofen were at the center of the Razorbacks’ three-run second inning, with Bohrofen driving in a pair and Diggs’ single accounting for the other.

Peyton Parker went 2 for 4 with 3 RBI as Stephen F. Austin (12-22) used a five-run third inning to breeze past the University of Arkansas at Pine Bluff in Nacogdoches, Texas.

Four other players recorded two hits, while Scout Sanders added a two-run home run for the Lumberjacks, who banged out 16 hits.

Karsten Vasquez had three hits to lead UAPB (8-23), which trailed 4-1 before Stephen F. Austin’s flurry in the third. Aidan Martinez added a pair of RBI for the Golden Lions who have now dropped four of their past five games.

NO. 3 ARKANSAS AT TEXAS A&M

WHEN 7:30 p.m. Central on Friday WHERE Blue Bell Park, College Station, Texas RECORDS Arkansas 30-7, 11-4 SEC; Texas A&M 23-13, 8-7 TV SEC Network RADIO Razorback Sports Network SHORT HOPS Arkansas DH Brady Slavens, who has been riding a hot streak, fouled off a 1-0 pitch from Brandon Anderson in the seventh inning that bounced off the ground and caromed into his face near the right eye. The blow dropped Slavens to the ground, and he was replaced by Zack Gregory, who hit a single. Dave Van Horn said Slavens had a puffy eye and his contact was messed up, but he should be OK. … The Razorbacks turned inning-ending double plays behind Will McEntire in the third and fourth innings then added a line-drive double play in the eighth to take their season total to 30. Arkansas entered the game tied for third in the SEC with Alabama in double plays turned. … Red Wolves first baseman Jared Toler and pitcher Walker Williams combined for a good play to get out of the fourth without allowing a run. With Robert Moore on third base, Jalen Battles hit a hard grounder that bounced off Toler and trickled down the first-base line. He retrieved the ball and fired to Williams covering first just in time to nip Battles and save the run. 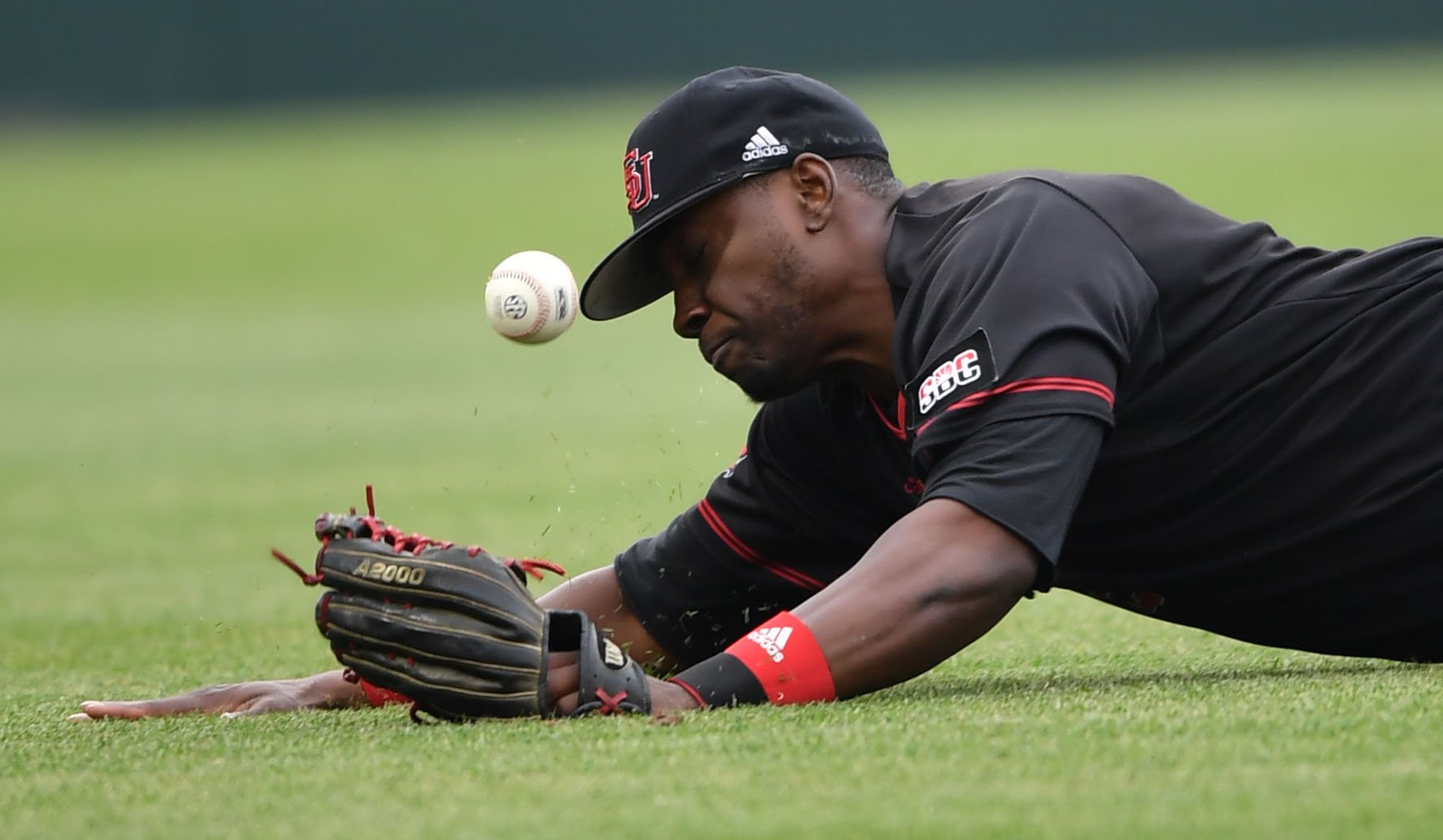