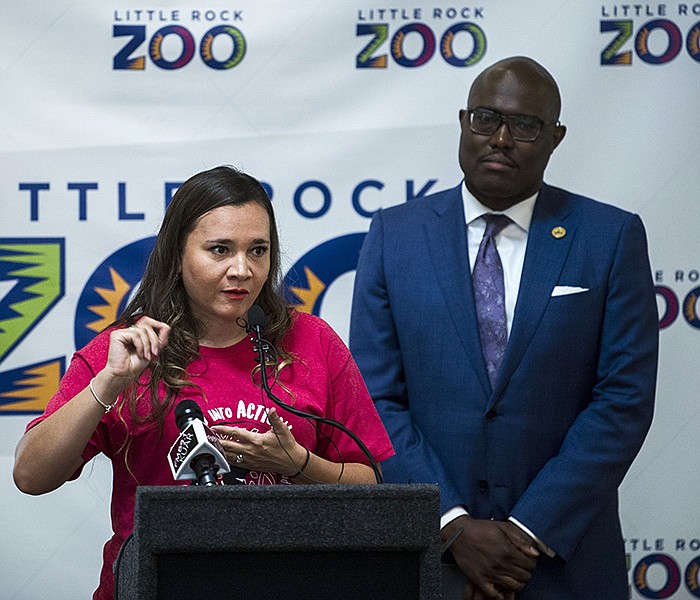 The program, dubbed "Swing Into Action" -- the logo features a lemur in mid-leap -- is the product of a partnership between individuals at the city and the Little Rock Zoo.

Several officials, including Mayor Frank Scott Jr., gathered for a news conference inside the Little Rock Zoo's Café Africa to publicize the program.

"Swing Into Action" will recognize food-service businesses that complete requirements for three tiers of certification, according to Lennie Massanelli, the city's sustainability officer.

Certification steps are straightforward, despite a big potential impact for the environment and business operations, Massanelli said during the news conference.

For instance, the first tier will invite businesses to adopt policies such as asking customers first if they need plastic utensils or a straw with their to-go order, she said.

A business at the highest tier would eschew single-use plastics and polystyrene foam to-go containers in favor of compostable items, among other practices, according to program guidelines available online.

Training will be provided to restaurant owners or managers on an ongoing basis, and the city's sustainability office will schedule a review and certification walk-through once requirements for a certain tier have been met, according to Massanelli.

Completing a tier will net restaurants free marketing via the internet and other media partnerships, Massanelli said, as well as certification displays like window clings or marketing graphics.

"While the green restaurant certification program is beneficial for the environment, it also enhances Little Rock's restaurant scene and helps business owners re-envision their operations for a more sustainable future," Massanelli said.

The Little Rock initiative comes without restrictions on food-service establishments that might force them to drop plastics or foam containers.

State lawmakers last year approved legislation that bars cities and counties from taxing or restricting the use of "auxiliary containers," including bags, cups or packages made of plastic or other materials.

City Director Capi Peck, the co-owner of Trio's Restaurant who represents Ward 4 on the Little Rock Board of Directors, suggested the initiative was a long time coming.

"The pandemic wreaked havoc for all of us, and we've been waiting to launch for two years, maybe not so patiently," Peck told attendees at the zoo on Thursday.

She tried to do something similar about 20 years ago via an Arkansas green restaurant association, but lacked the partners and infrastructure, Peck recalled.

Karen Zuccardi, chair of the Little Rock Sustainability Commission, said the idea for the initiative came from her capstone project at the University of Arkansas System Clinton School of Public Service.

While doing research for the project, she found many restaurants were already taking steps to become greener, but their efforts lacked a cohesive citywide direction.

Zuccardi recalled that some people in SoMa were doing some things, people in Hillcrest were doing other things, but "there was not really a clear voice as a community at large."

Susan Altrui, the zoo director, cited past efforts at the zoo, such as ending the use of one-time plastic straws in food concessions as well as eliminating plastic bags.

"When City Director Capi Peck, Karen Zuccardi and the city of Little Rock Sustainability Office came to us with the idea of creating a sustainable restaurants program, the Little Rock Zoo was excited to participate in this program," Altrui said.

Scott encouraged restaurateurs to participate and described it as one of many sustainability efforts city officials are pursuing.

The mayor called Little Rock "a foodie city" and added that anybody who knows him knows he loves to eat at all kinds of restaurants.

Scott also referred to another initiative that he teased in his State of the City address last month. In his speech, Scott said "Eat Big in Little Rock" will launch this spring and highlight eateries around the city.

The mayor on Thursday said that "if we're gonna be eating big in Little Rock, we have to make sure that we do it in a very sustainable way."

More information on the "Swing Into Action" certification program is available at littlerockzoo.com/conserve/support-conservation/green-restaurant-initiative/.