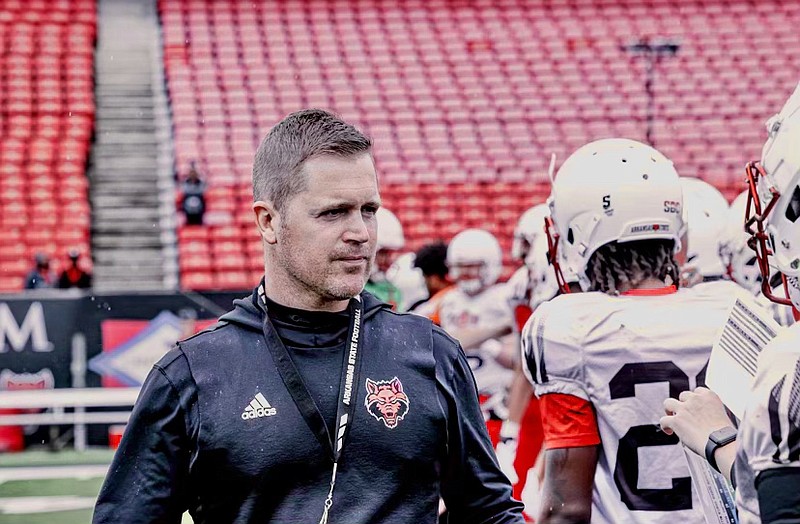 Entering his second season as director of athletic performance, Jeff Jones has tangibly improved the Red Wolves on an incremental but consistent basis. (Photo courtesy of Arkansas State Athletics)

Two players had maxed out their sprints at 21 mph and another nine at 20. Last year? Not one player hit the 20-mph threshold.

Twenty-one guys measured at least 40 inches on a vertical jump. Eight did so in April 2021.

Jones, 54, utters the phrase "work in progress" in most every press availability. It's borderline cliche by now, but this spring there's tangible evidence of the maturation to which he so often alludes.

Jeff Jones, ASU's assistant athletic director for athletic performance, is not just the person most responsible for the Red Wolves' physical evolution, he's also its most reliable witness.

It's best to ignore Jones' elaborate title. The 33-year-old is not some administrator in a tall, stuffy building. Rather, he's tucked in a windowless office inside the weight room of ASU's Centennial Bank Athletics Operations Center, a facility opened less than three years ago as part of a $29 million renovation.

As the head strength and conditioning coach for the Red Wolves' football team, Jones wants to be among his players.

But for a few minutes, he closes his office door. He sits behind his desk, surrounded by tributes to iconic athletes such as Kobe Bryant and Michael Jordan on the wall, and begins to consider 15 months of growth.

"It's not just making someone faster, stronger, more explosive and more resilient," he told the Arkansas Democrat-Gazette. "It's getting guys to be more consistent on a daily basis, to be more focused in detail ... and we're not where we need to be with that. But there is progression."

Ryan Aplin wouldn't have "stood on the table" for many people, let alone risk his paycheck on them.

Jeff Jones was one of those people, though. In the first 14 years of his career, the Iowan made six different stops, including a six-month stint at ASU during the 2012 season, working under then-Director of Athletic Performance Ryan Russell.

Aplin, now an assistant coach at Georgia Southern, was in his final season as the Red Wolves' quarterback -- a career that included a pair of Sun Belt Conference player of the year honors and multiple school records. All he needed to finish his degree was an internship, so as an exercise science major he worked for Russell and Jones.

The pair connected again as Auburn staffers in 2014-15, following Gus Malzahn from ASU, but Aplin said he always had a sense of the environment Jones would want to establish in a weight room of his own one day.

"He's demanding, but he's not demeaning," Aplin said of Jones. "That's hard to find sometimes in this profession, those guys who ... love up on you, they're going to treat you like their own, but they're going to hold you to that standard.

"That stuff does transition from the weight room to the field, and I think that teams that are really good in that department are the teams that excel on game day."

Jones had never interacted with Butch Jones prior to his interview early last year. In one another, the Joneses found a shared love of competition.

For Jeff, it manifests through data.

Rather than simply testing his players once a year, Jones measures them on a regular basis. The goal is to make incremental and consistent improvements over time.

The numbers are occasionally displayed on the video wall inside the lobby of the Red Wolves' football facility. They're also sent directly to the players -- former center Jacob Still said reports would land in his inbox multiple times a day.

"We're competing with numbers," Jones said. "Changing somebody's habits, who they are as an athlete, somebody's nervous system, it takes time. But it's really cool to see, even in Year 2, that progression."

Still, who arrived in 2016, lived the transition from ASU's outdated training facility -- one where players had to lift in groups because of its limited size -- to its current setup, with four different strength coaches shuffling through Jonesboro in the five years prior to Jones.

By that point, Still's body "was kind of beaten up," and the four-year starter was dealing with a combination of patellar tendinitis and back woes.

Still remained at ASU into the summer, utilizing the 1080 Sprint machine, a nearly $20,000 device that measures speed and power, among other things. Jones, in turn, uses those metrics to develop player-specific training plans.

"Everything was precise, and if it wasn't for how I changed my training last year, I don't think I would have been able to play," Still said. "A lot of people think the strength coaches are just going to try to break off players [with running]. ... That's not Jeff."

As much as Jones immerses himself in the numbers, he also dedicates himself to knowing the Red Wolves on a personal level.

"When you have a relationship, you know where [constructive criticism] is coming from, regardless of how it comes off," Aplin said.

Not even a month after transferring to ASU from Alabama, defensive end King Mwikuta proclaimed Jones to be "my guy." Mwikuta said Jones was on him from the jump, even going as far as to correct him in stretching.

"He's going to come and get in your face immediately, like as soon as we get out on the practice field," Mwikuta said a few weeks ago. "The energy and the juice and the love are just different."

After a 2-10 season to start Butch Jones' tenure, there is an understanding inside the program that can't be repeated in 2022.

Today's spring game won't have any bearing on ASU's record. It is an opportunity, however, to get a glimpse of the changes the Red Wolves have committed themselves to since the end of the program's worst season in more than two decades.

Throughout its 14 spring practices, ASU has flashed a verve that was missing last full. There's an optimism that after a full offseason under Jones. The Red Wolves assure they will have things turned up by Sept. 3, when they open the season against Grambling State.

"As hard and as challenging as [last year] was ... we learned a lot about ourselves and coaches and players and our program, and we never want to go through that again," Jones said. "But I've been obsessed with daily improvement and daily excellence. ... Be in that moment."

NOTES Gates will open at 1 p.m. … Awards will be handed out for performance during spring camp in addition to recognizing 2021 ASU most valuable player Joe Ozougwu. … Six transfers will debut for ASU, including DE King Mwikuta (Alabama), S Eddie Smith (Illinois) and LB Jordan Carmouche (Houston).