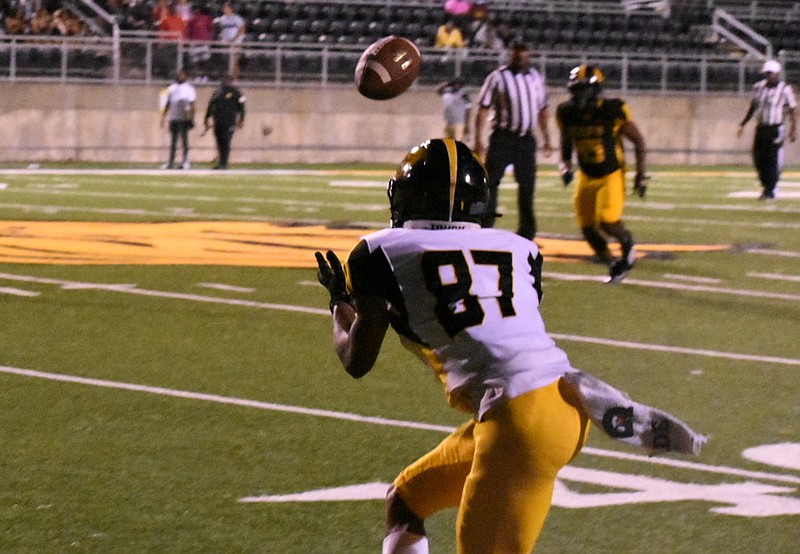 With tailgaters in the parking lot and a band playing in the home bleachers, the University of Arkansas at Pine Bluff put on a gameday atmosphere for its annual spring game Friday night.

A large crowd for the final dress rehearsal of the spring saw Skyler Perry, Jalen Macon and Mekhi Hagens each throw a touchdown pass in the offense's 24-9 win over the defense.

Tyler Shaw, a recent graduate of Memphis' PURE Academy, capped the game with a long catch-and-run for a touchdown from Hagens on the final play.

"It's always good to show that we can score some points," third-year Golden Lions Coach Doc Gamble said. "We kind of handcuffed our defense a little bit. We told them they just have to play base at times. I told them, 'Let's keep the stuff real simple.' That's what you typically do in a spring game, but you've still got to be able to win a game by playing your base defense, when it's all said and done."

Macon, a true freshman last season, and Hagens, a transfer from Cisco College in Texas, pushed former all-conference performer Perry throughout the spring.

The defense was active in its own right, collecting six sacks on the night.

"Our defense has actually been playing lights out," Gamble said. "They played great today because a lot of those times, we let the quarterback go. Some of those, we missed some sacks, possibly. Other than that, we're real excited about what we have and the staff we work with."

The Golden Lions are going into a new season with five new assistant coaches, a new strength coach and an almost entirely new quarterback corps, led by fifth-year starter Perry. It was a year ago that Perry guided the Lions to the Southwestern Athletic Conference championship game in a spring makeup of a 2020 season that was lost to covid-19 pandemic.

But the Lions took a nosedive the following fall, going from 4-1 overall (4-0 SWAC) in the spring to 2-9 (1-7) with a defensive unit depleted in depth by injuries and struggles in the passing game.

"I told the guys, it's tough to beat him because he doesn't turn it over," Gamble said. "If you don't plan on being the backup, you better learn how to take care of the football."

The spring game was held as part of the university's Founders' Week activities. Athletic Director Chris Robinson will give a state-of-the-athletic department speech at 11 a.m. today inside Simmons Bank Field. 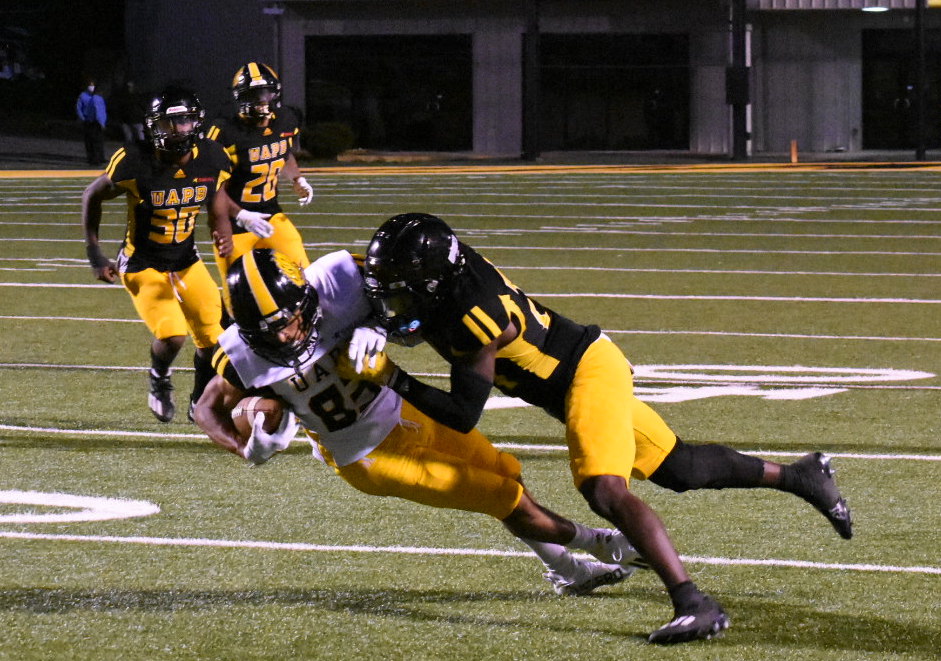 A UAPB wide receiver takes a hard hit after a catch in the second half of Friday's spring game at Simmons Bank Field. (Pine Bluff Commercial/I.C. Murrell)