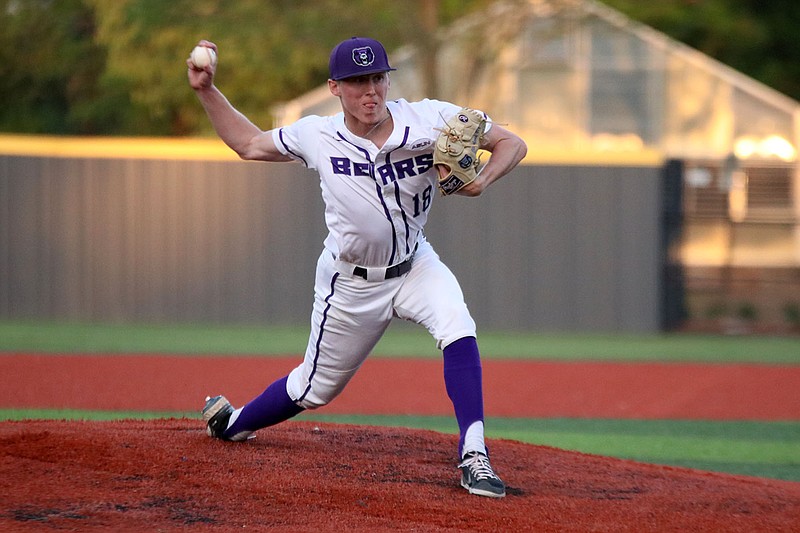 CONWAY -- Tyler Cleveland is always moving. While his team bats, the Central Arkansas ace paces around the dugout, anxiously awaiting his turn back on the mound.

Once there are two outs, the East End native grabs his glove and walks to the end of the dugout. He'll place his foot on the top step and rest his glove on his knee.

As soon as the final out is recorded, Cleveland is on his way to the mound. Oftentimes, he's thrown multiple warmup pitches before any of his teammates have made their way back out to the field.

"Since growing up, I've been told to work quickly," Cleveland said. "It's just kind of my thing."

That routine has been plenty effective for the sophomore over his past five starts, including Friday, when Cleveland threw his fourth complete game of the season in the Bears' 12-1 win against Bellarmine. The Sheridan High School alum had plenty of run support with UCA scoring 11 runs between the fourth and sixth innings -- Hunter Hicks provided the highlight of the night with a line-drive grand slam to kick start the offensive outburst.

But there was never a reason to think Cleveland was going to need that much help. The right-hander allowed six hits while striking out 10, and Bellarmine's lone run came on a solo shot that just snuck over the wall in deep left-center.

"He had a really good year last year, and I think people expected him to match that," UCA Coach Nick Harlan said of Cleveland. "It took a little bit of time early ... but he's just done a good job. He wants to get outs, he wants to be efficient and in between his outings, he works really hard."

Part of the reason why it took Cleveland several starts to find his bearings in 2022 was because he wasn't a starter a year ago.

Although he was named first-team All-Southland Conference last season, he made 22 of 23 appearances as a reliever, finishing with nine saves.

But in his one start, Cleveland did go the distance, striking out a career-best 12. So it wasn't impossible to see him in a different role.

Still, it required an adjustment to become a pitcher who entered the weekend among the top 20 in innings pitched nationally at 57 2/3.

"I had to be more conditioned," Cleveland said. "But as a starter, since I've been in this groove, once you're on, you just keep going until you know you can't anymore."

Cleveland's recent work has been impressive, with all four of his complete games coming since March 26. Friday was perhaps his best yet, needing just 108 pitches to get his fourth win of the season.

Even better, Cleveland didn't have a walk and recorded 21 of 27 outs via either a ground ball or strikeout.

With his sidearm slot -- something Cleveland changed during the pandemic -- and a fastball that was above his normal velocity, touching 88 mph, Cleveland had Bellarmine off-balance throughout.

"We've been making a big emphasis on the slider and making a [velocity] jump in that," Cleveland said. "It was definitely taking off harder ... and for me specifically, when my velo is up, [my fastball] sinks later, so it makes a big difference to the hitter."

Harlan, in his first year as manager after previously serving as UCA's pitching coach, gave credit to his assistants for Cleveland's growth.

But more than anything, he recognized Cleveland for the work he's put in to make this recent stretch a reality.

"There's nothing better," Harlan said when asked what it's like to see Cleveland live up to expectations. "I want these players to leave with more confidence. ... So they're learning that when people are counting on them, they're capable of coming through and performing."

CORRECTION: A previous version of this story included an incorrect photo.