Increase in available positions seen as a driver for soaring inflation rate by CHRISTOPHER RUGABER | April 23, 2022 at 2:25 a.m. 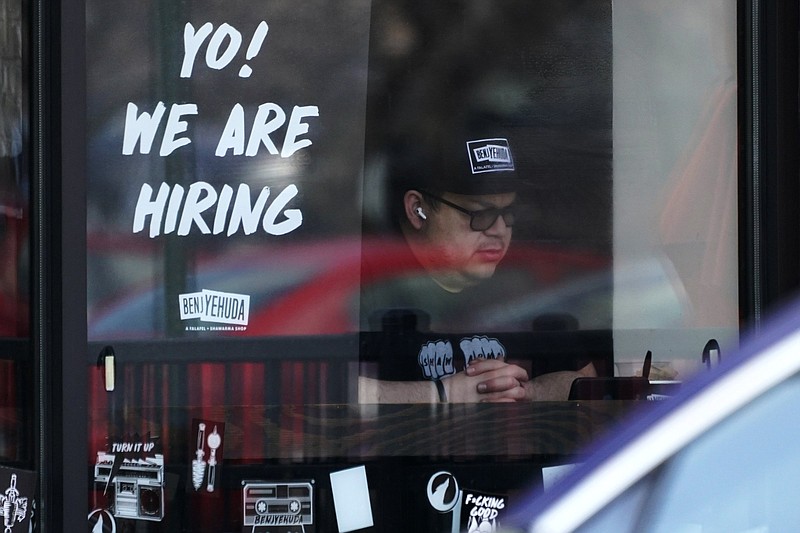 A hiring sign is displayed at a restaurant in Schaumburg, Ill., Friday, April 1, 2022. Despite the inflation surge, persistent supply bottlenecks, damage from COVID-19 and now a war in Europe, employers have added at least 400,000 jobs for 11 straight months. (AP Photo/Nam Y. Huh)

WASHINGTON -- Federal Reserve Chairman Jerome Powell isn't as pleased with the robust U.S. job market as some people think he'd be, and the Fed has a plan to do something about it: Take it down a notch.

On Thursday, Powell described the job market as "extremely, historically" tight and "unsustainably hot." Available jobs are near record highs. Wages are rising at their fastest pace in decades. The unemployment rate is flirting with a half-century low, and layoffs are sparse.

Yet Powell doesn't see all of this as purely a cause for celebration. With the highest inflation in four decades hurting households and businesses, the Fed chair regards the job market's strength as a key driver of spiking prices.

But Powell is also betting that that strength will give the Fed an unusual opportunity to cool the economy and fight inflation without derailing the job market or causing a recession. The Fed hopes to reduce the huge number of job openings, rather than spur layoffs. Fewer available jobs, in turn, would slow wage increases and help tame inflation.

On Thursday, in a panel discussion held by the International Monetary Fund, Powell said the Fed's goal is to get the job market to "a better place."

What's better than really hot? And what would it mean to get there?

Start with the huge number of open jobs -- 11.3 million at last count. That's clearly a boon to anyone seeking a better job. For employers, though, all those openings are a source of continuing frustration because a worker shortage has made them hard to fill.

As Powell and the Fed see it, the surge in job postings forces employers to raise wages to attract and keep workers. Those higher labor costs are then passed to customers in the form of higher prices, thereby helping fuel inflation.

But this time, with so many open jobs, the Powell Fed is figuring that most employers will respond by cutting back on job postings, rather than laying off people. Fewer openings would reduce their need to raise pay and would ease inflationary pressures.

If it works -- a big if -- this would help Powell achieve the elusive "soft landing" that Fed chairs seek when the economy is growing too fast but that they rarely achieve when inflation is as high as it is now.

Economists are generally skeptical that the Fed can successfully thread that needle. But given the job market's strength, they also say it's a possibility.

"We have enough space to cool off, but not go cold," said Claudia Sahm, senior fellow at the Jain Family Institute and a former Fed economist.

In his remarks Thursday, Powell pointed to a key figure underlying the Fed's approach: There are about 5 million more jobs -- including both filled and unfilled -- than there are unemployed people to fill them. That gap is the largest it's been since World War II, according to economists at Goldman Sachs.

"We've got a demand-supply imbalance in the labor market," Powell said. "It's our job to get to a better place where supply and demand are closer together."

The Fed's rate increases are intended to achieve that balance. Last month, the central bank raised its benchmark short-term rate for the first time in more than three years, by a modest quarter-point, to a range of 0.25% to 0.5%. Economists expect the Fed to raise rates by a more aggressive half-point at each of its next three meetings. That would amount to the fastest tightening of credit since 1994.

The Fed's moves have already contributed to higher borrowing costs for home mortgages, auto loans and credit cards. Those higher costs could slow consumer spending and, the Fed hopes, convince businesses that they don't need to hire so many people.

"The key to a soft landing is to generate a slowdown large enough to persuade firms to shelve some of their expansion plans, but not large enough to trigger sharp cuts in current output and employment," economists at Goldman Sachs wrote this week.

At a news conference last month, Powell suggested that the job market had strengthened "to an unhealthy level" and noted that there were about 1.8 jobs available for every unemployed person. If the ratio of openings to the unemployed evened out to something closer to 1 to 1, he said, "you would have less upward pressure on wages."

For now, average hourly wages are rising at about a 5.5% annual pace, the sharpest pace in four decades. Economists estimate that if the gains slowed to 3% or 4%, it would reduce inflation by roughly 2 percentage points.

The Fed's preferred measure of inflation has risen to 6.4%, partly because of supply shocks that have sharply raised the cost of gas, food, autos and many other goods and components. Those increases won't be affected much by the Fed's actions. Still, many economists expect an easing of supply chain snarls to help reduce inflation this year.

With workers switching jobs in record numbers, Sahm said some companies are likely posting extra openings to build "an inventory of workers" to ensure that they can meet customer demand. That might not be necessary if spending slows, she said, making the Fed's approach feasible.

And many employers may be more reluctant to reduce the number of jobs after having had trouble rehiring people after the pandemic recession. The number of former job holders receiving unemployment aid has reached its lowest level since 1970.

"Businesses are holding onto workers harder than ever," said Sarah House, an economist at Wells Fargo. "Labor shortages have become a more persistent issue."

Goldman Sachs has calculated that the gap between total jobs, including openings, and workers, would need to fall by half -- or 2.5 million -- to slow wage increases and inflation. Some of that reduction could occur as Americans who had dropped out of the workforce during the pandemic return and take jobs.

Yet a drop of that magnitude has never happened outside a recession, Goldman said, or without large increases in unemployment.

Still, Goldman's economists put the odds of a recession only at about one-third over the next two years.

Ryan Sweet, an economist at Moody's Analytics, said that with businesses and households in solid financial shape, with more savings and less overall debt than before the 2008-2009 Great Recession, any economic slump would likely be brief.

"If the Fed pushes the economy into recession, it's probably going to be a mild one," Sweet said. 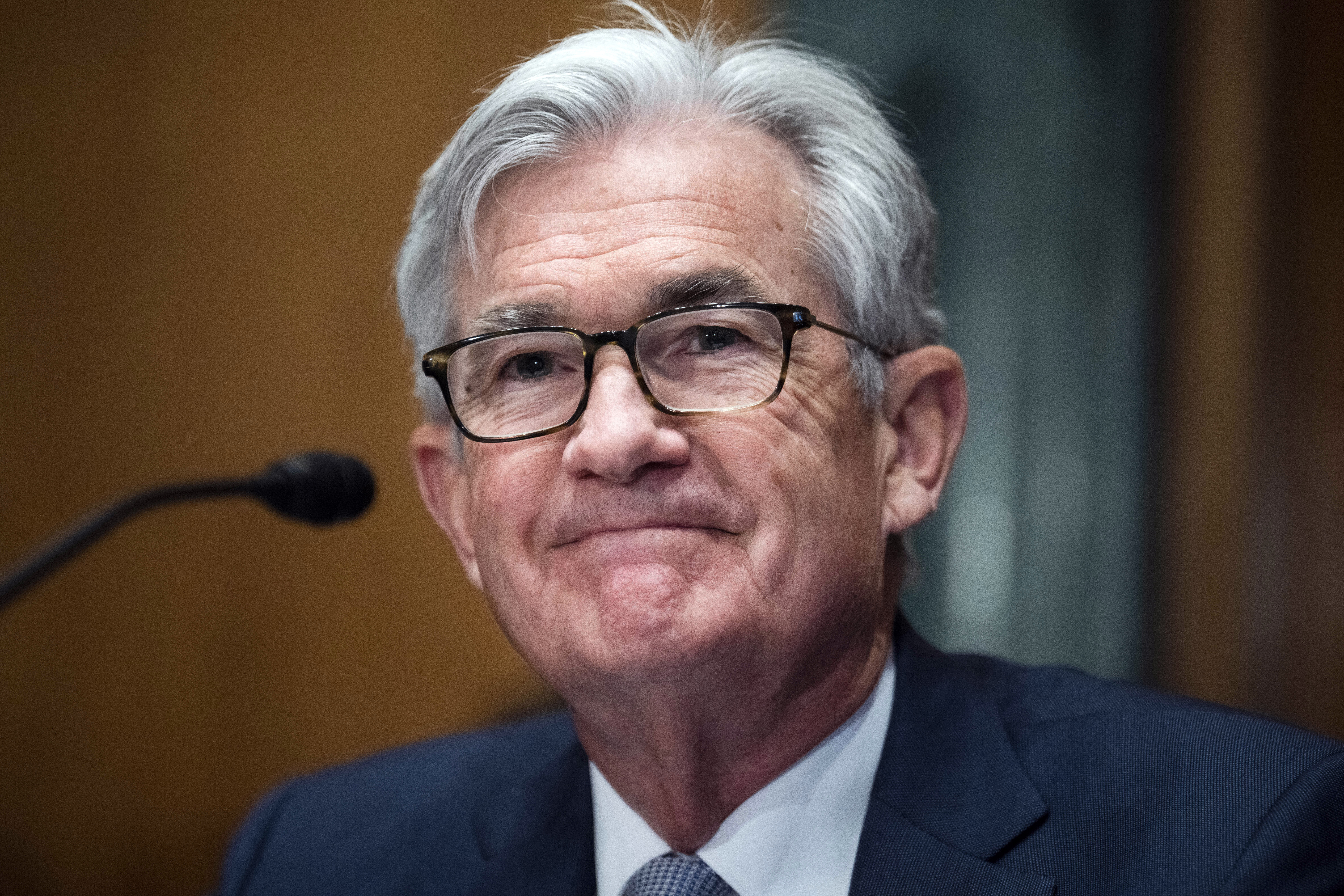 FILE- Federal Reserve Chairman Jerome Powell testifies before the Senate Banking Committee hearing, on March 3, 2022 on Capitol Hill in Washington. Powell isn't as cheerful about the most robust job market the nation has experienced in recent history, and he and is thinking a little differently than most people about the strong U.S. job market these days. On Thursday, April 20, he described it as “extremely, historically” tight and “unsustainably hot."(Tom Williams/Pool Photo via AP, File)