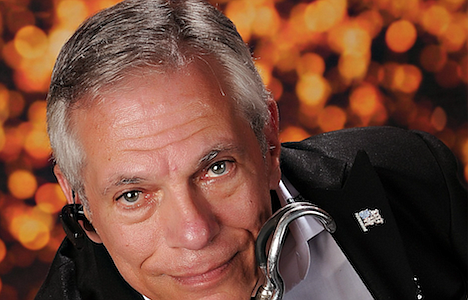 Jeff Steinberg, a Christian singer and speaker, was born with birth defects after his mother took thalidomide. Encouraged by Christian families, he ended up going to college, singing and giving inspirational speeches, traveling the world and offering encouragement to people.

Jeff Steinberg calls himself a "masterpiece in progress." It's a label, he maintains, that anyone made in the image of God can claim.

Born in 1951 with physical limitations -- no arms and misformed legs -- Steinberg has used his mind, his voice and his victories over adversity to inspire others.

Now 70, Steinberg says Psalm 139:14 is true: "I will praise You, for I am fearfully and wonderfully made; Marvelous are Your works."

Due to his birth defects, Steinberg says he did not have a typical home life.

Early on, he spent a good deal of time at the Shriner's hospital in Philadelphia; later he was placed at the Good Shepherd Home in Allentown, Pa., an institution founded by a Lutheran minister.

As he grew, a couple of families in the community took an interest in him, befriending him, taking him to church and offering him encouragement.

One was Mennonite; the other was Wesleyan.

During that period, "I learned the principles that became the foundation for my life ... that I am fearfully and wonderfully made, and that God makes no mistakes, that my disability is not an accident. It's not some happenstance. It's not some terrible thing that happened. That in fact, my life is a masterpiece, becoming, one color at a time, all that he had designed for me to be."

The Wesleyan couple, Art and Betty Snyder, were singers and spotted his vocal talents. Eventually, they asked him to join them on the stage.

After his high school graduation, they helped Steinberg to attend a Wesleyan Bible college, welcoming him into their home on the weekends.

Nearing retirement, they accepted fewer invitations to sing, encouraging churches to bring in Steinberg instead.

He has been singing and touring ever since.

In 2013, Steinberg was the subject of a documentary, "Tiny Giant."

While his physical height is 4 feet, 6 inches, "In character, in accomplishment, in example, the man is a giant," singer Pat Boone told the filmmakers.

In Arkansas, Steinberg will be joined by Missourian Jeff Rudloff, the author of many of his songs. He'll also enjoy visiting with Magnolia pastor David Moore, his friend for nearly 45 years.

In his spare time, Steinberg is writing a book, a follow-up to his autobiography, "Masterpiece in Progress."

In it, he plans to outline what he views as the keys to a successful life.

Moore brought Steinberg to sing in Stamps in the 1970s, promising the congregation he'd shave his beard off if 100 people showed up for the concert; 189 attended.

Using a prosthetic limb with a hook, Steinberg did some of the shaving himself.

Since then, the facial hair has returned and the friendship has grown deeper.

"I've had Jeff to just about every church that I've pastored," Moore said. "He's just a joy to be around."