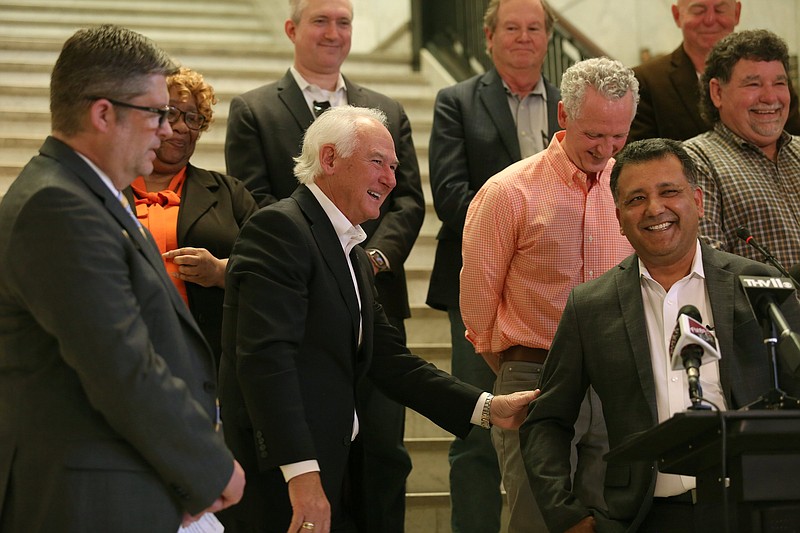 People packed the lobby of North Little Rock City Hall for the widely anticipated announcement that the city was going to land a new "family-friendly" entertainment complex that will become a major draw around Central Arkansas when it is opened in the last quarter of 2023.

The project will be built on the site of the now-closed Wild River Country waterpark on Crystal Hill Road.

"This is something, as I've said, is not only for North Little Rock but for Maumelle, west Little Rock, all of Central Arkansas," said North Little Rock Mayor Terry Hartwick. "When we bring people here, now they're going to have something else [to do] and, yes, go spend their money."

The new development will be dubbed Maly's Entertainment Area, after the Conway-based developer -- the Maly Group -- that is leading the effort. Dr. James Thomas, the owner of the Maly Group, said he expects his project to become a new model for entertainment.

"As a kid, you probably hanged around a mall," said Thomas, who is also a cardiologist in Conway. "There are no more malls now. So kids and everyone need a place for entertainment."

The anchor of the new entertainment complex will be a golf and restaurant complex called "T-Time," similar to Top Golf, the chain of driving ranges. The complex will also include a virtual arcade, restaurants, specialty shops and eventually a hotel and multi-family homes.

The project is estimated to cost $28 million, which includes plans for the driving range and bowling alley, Thomas said.

"It's [got] easy access to the highways with really good visibility both from [Interstate] 40 and [Interstate] 430," Thomas said.

After finding the location, the Maly Group approached the city of North Little Rock with their plan. Hartwick and North Little Rock Director of Development Robert Birch said they were pleased about the plan, as it is projected to bring about 200 jobs.

"One thing we have a lack of is, we don't have those part-time jobs students can work," Birch said.

Hartwick, who carried around a golf club during Friday's event at City Hall, could not hide his elation during the announcement, stepping in to hug Thomas, after Thomas said the project will bring $10 million to the city per year, including tax revenue.

The announcement for the project was made easier as the Maly Group did not ask the city for money or tax breaks, Hartwick and Birch said. However, during the press conference, Thomas said he wanted a four-lane road that connects his development to I-40.

When asked what made North Little Rock attractive for a developer as opposed to Little Rock, Hartwick responded "besides the mayor," jokingly referring to Little Rock Mayor Frank Scott Jr.

For many, the news of a high-tech driving range and sports bar coming to Central Arkansas was welcome news. In 2020, Little Rock officials attempted to get Top Golf to open a location in War Memorial Park, but ultimately no move was made.

The venue in North Little Rock will be similar to Top Golf, but not affiliated with the chain and will be dubbed "T-Time." Thomas said he thought about attempting to bring Top Golf to Central Arkansas, but decided to forgo working with the chain.

"Oh God, we never thought we would get such a response," Thomas said. "We wanted to just bring it out there so Top Golf [doesn't] announce in Little Rock."

Thomas said he consulted with Kansas City-based T-Shotz, a golf-centric entertainment and restaurant venue when considering his plans for North Little Rock. A previous report in the Arkansas Democrat-Gazette incorrectly reported T-Shotz would anchor the new development in North Little Rock.