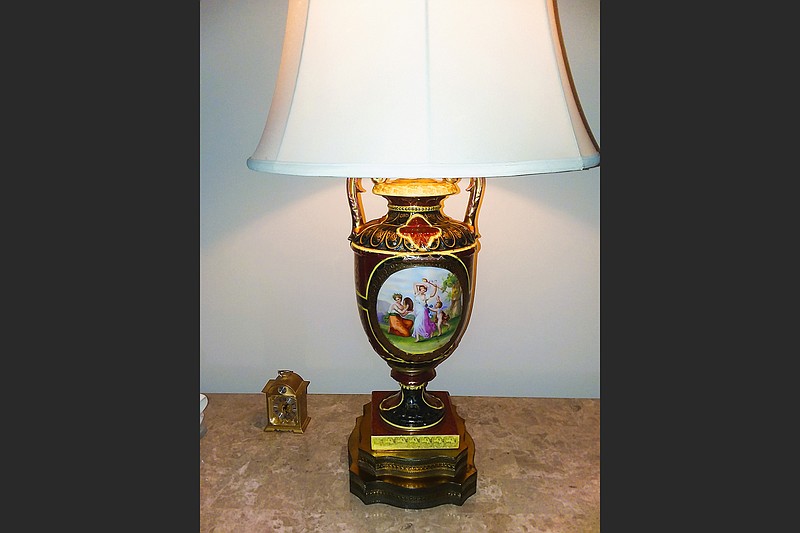 The signature is of Angelica Kauffman — but is it actually her signature? (Reader submitted/TNS)

DEAR HELAINE AND JOE: Attached are photos of the front, back and enlarged section of an old lamp that was originally a vase. It has been in my family for over 75 years. I believe it is hand-painted and signed by the artist. Any information would be appreciated.

DEAR G.R.: Some call Angelika Kauffmann the “Female Raphael of the Arts,” and she was one of the most celebrated female artists as of her day. She was born in 1741 in Chur, Switzerland, which is now present-day Graubunden.

At birth she was named Maria Anna Angelika Kauffmann, but in English she is known as “Angelica Kauffman.” She called herself a “history painter,” worked in the neoclassical style and was known for her portraits and landscapes. She initially painted in Rome and Naples, where she painted portraits of some prominent English visitors to Italy.

She was very successful, and at the urging of Lady Wentworth (aka Lady Bridget Wentworth Murray) she moved to London, where she continued her success. She became a friend of the royal family and Sir Joshua Rey-nolds, who called her “Miss Angel.” There are historical rumors about the relationship between the 20-something woman and the much older man (by 17 or 18 years), but there is little to no proof of anything untoward happening.

Kauffman was one of the founding members of the London Academy in 1768 and exhibited paintings in their events. She was also known for her singing voice, which was said to be comparable to the best Roman virtuosi. Upon Kauffman’s death in 1807, celebrated sculptor Antonio Canova designed her funeral in the manner of the one held centuries earlier for the Renaissance painter Raphael.

The image on the covered urn/lamp base in today’s question is based on Kaufman’s work, but it was not executed by her hand. Without any marks, we have to speculate that the piece was probably made sometime between the 1890s and the 1920s and in the style of Royal Vienna.

Overall, the look of the piece appears to be closer to the 1920s than earlier. The brass base of the lamp is typical of the first quarter of the 20th century and is similar to ones found on lamps from the 1910s to the 1920s. Certainly, the decoration on the lamp is in the neoclassical style of Angela Kauffman, but it is probably a transfer print based on her work. Some brush strokes may have been applied to the piece to make the work look and feel more hand-painted.

Objects with Kauffman’s signature can be found readily in today’s antiques and collectible marketplace. Boxes, plates, tea sets, urns, lamps, plaques, even furniture pieces feature decorations based on Kauffman’s work, bear a “Kauffman” signature and are collected as late-19th- and early-20th-century decoration. Single lamps bring about $150 at retail, but pairs are more sought after and can bring $400 and up.

Helaine Fendelman and Joe Rosson have written books on antiques. Do you have an item you’d like to know more about? Contact them at Joe Rosson, 2504 Seymour Ave., Knoxville, TN 37917, or email them at treasures@knology.net. If you’d like your question to be considered for their column, please include a focused, high-resolution photo of the subject with your inquiry.