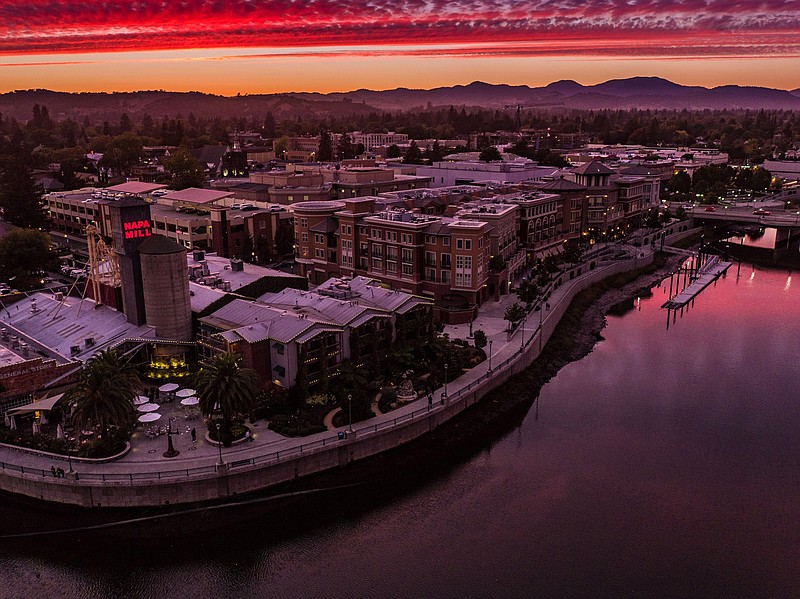 Napa had long been a Wine Country afterthought, a place to pass through on the way “Up Valley.” Not anymore. “Downtown Napa” has become a destination in its own right. (Courtesy of Visit Napa Valley/Bob McClenahan)

Our driver waved the car behind us to go around. We were chugging up a slight hill in a little white tuk-tuk, past blooming fields of mustard flowers that looked like they'd been caught in the line of fire at an all-yellow paintball game.

Our open-air electric vehicle had only been rolling a few minutes out of downtown Napa before we hit the picturesque countryside, with the kind of California Wine Country vistas that visitors come to expect: manicured vineyards, dazzling green knolls and peaks poking up in the distance.

Windmills and red barns dotted rolling hills that heaved larger as we drove along, with the rickshaw revving to take us up to one of Napa Valley's oldest family vineyards. The landscape kept our speed in check, but there was no reason to go any faster. We were barely leaving Napa city limits.

Napa Valley is a well-trod destination for wine lovers, with a reputation for luxury. Exalted wineries and polished resorts blend into one another, and the area has collected its own galaxy of Michelin stars. To explore, many visitors will choose one of the ultra-charming small towns — Yountville, St. Helena, Calistoga — to base themselves as they fan out to wineries up and down the valley.

That was my plan, anyway. But the search for inexpensive accommodations for a recent friends' trip led me away from those well-heeled towns, with their $1,200-a-night hotel rooms, to a spacious Airbnb in the unexpectedly vibrant county seat of Napa. The small city was our literal last resort, but it shouldn't have been.

Once a sleepy town with some grungy quarters, Napa had long been a Wine Country afterthought, a place to pass through on the way "Up Valley." Not anymore. What's referred to locally as "downtown Napa" has become a destination in its own right, a compact, walkable city filled with top-tier restaurants, a buzzing market, hip hotels and public art.

For oenophiles, downtown Napa is a generous home base. More than four dozen tasting rooms and wine bars are clustered in the city's core, and just beyond the business district are some less-trafficked grape-growing regions. Spending time here, instead of just passing through, gives visitors an off-the-beaten-path feel for one of America's busiest wine destinations. But even wine industry professionals admit the city's rapid transformation has taken them by surprise.

"Napa used to be the place that you stopped to get your oil changed," said Adam McClary, a former Minneapolis bartender and restaurant manager, who moved to Napa in 2008 to launch a winery, Gamling & McDuck. "The restaurants were not that great. There were no wineries. It was just another little city."

Downtown Napa "has gone in 20 years from dingy and horrid to being the hot property in the valley," said Jason Kallsen, a Minnesota-based sommelier and the founder of Twin Cities Wine Education. On a trade visit to Napa in 2001, Kallsen passed up an opportunity to invest in an abandoned building from the early 20th century. "That building is now in the heart of it all," he said.

On our first evening in the city, my friends and I followed a walkway along the Napa River, past quirky sculptures that light up at nightfall, a pedestrian-only restaurant row, and a couple of beer-centric pubs for those who were wined-out.

Our first stop was Oxbow Public Market, a 40,000-square-foot food and drink emporium. Inside, we picked up everything we needed for a picnic basket — cheese, olives, salty French butter and herby crackers. Casual eateries and cupcake counters line the sides of the market. A bar on one end is devoted to rosé. We grabbed a table on the riverside terrace at Hog Island Oyster Co. and had an aperitif of fresh oysters and Prosecco as the sun went down.

And that was about as fancy as things got for us in downtown Napa. Sure, we could have hopped in a Lyft and gone to dinner at one of Thomas Keller's empire of restaurants 20 minutes away in Yountville — well, any except the French Laundry, where reservations are nearly impossible to snag. But then we might have overlooked some of the city's gems, such as Angele, a charming waterside spot with French country cuisine, or the sprawling patio at Italian mainstay Bistro Don Giovanni, a favorite of locals. Food in Napa comes in every price range, from Model Bakery and its perfect English muffin breakfast sandwiches to Michelin-starred La Toque and Kenzo. 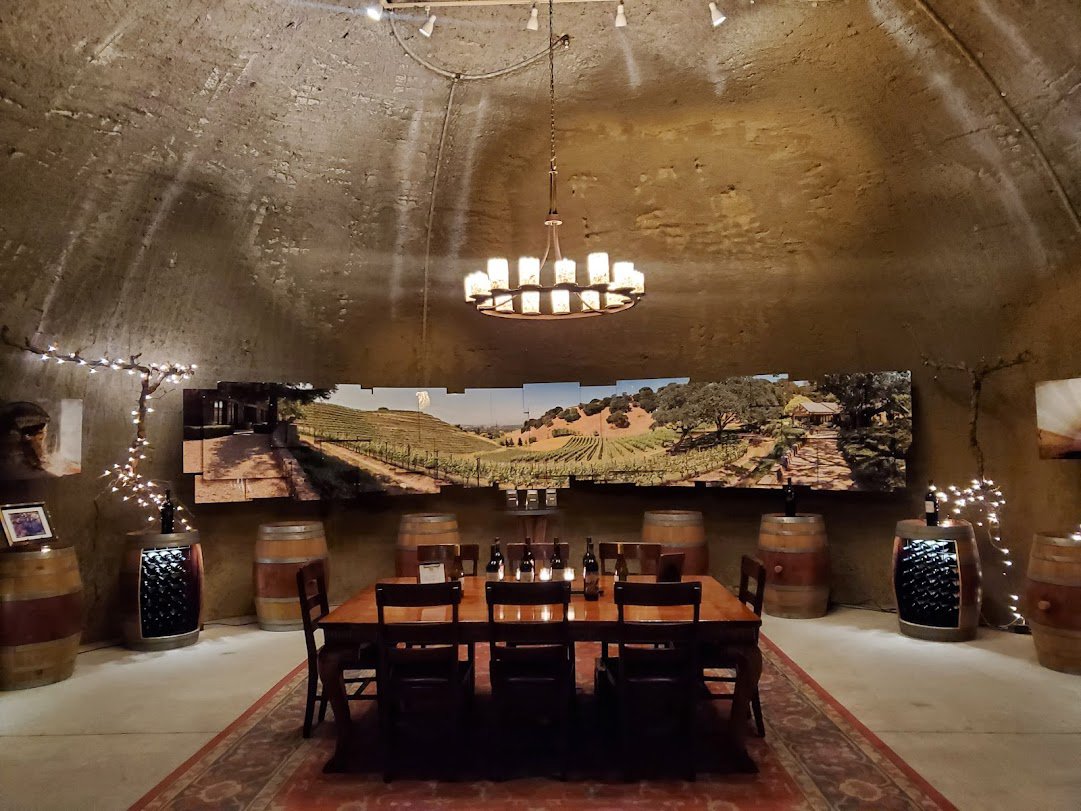 An underground tasting room is part of the cave winery at Porter Family Vineyards, in the Coombsville district of Napa Valley. (Minneapolis Star Tribune/TNS/Sharyn Jackson)
CHEESEBURGERS AND WINE

With dusk settling, we walked out of the market and right into Gott's Roadside, an outpost of a well-known St. Helena burger joint, where we crushed a second dinner of cheeseburgers and wine. (In Napa Valley, there is always wine.) "I always thought of Wine Country as being more pretentious," said my friend, who was on her first trip to California. She chased her burger and Cabernet with a milkshake.

Until recently, one of downtown Napa's shortcomings was a lack of nightlife. After spending a few days at multiple wineries, I could see why. In our group, anyway, there wasn't much appetite to continue imbibing after dinner when we'd begun at 10 a.m.

With some new additions to the scene, including a tiki bar and an all-night cardroom, a Blue Note jazz club, and a handful of tasting rooms and wine bars that stay open after the workday ends, there were plenty of reasons to try. Still, full and fighting jet lag, we were back at our Airbnb and in bed by 9 p.m.

The next morning, the enotourism commenced with a nine-minute drive to Coombsville, the newest of 16 grape-growing districts in Napa Valley. Located on an ancient collapsed caldera, the vineyards in Coombsville benefit from compact volcanic soil and proximity to San Pablo Bay, which brings in cool air every afternoon, protecting grapes from summer's heat. Made official only 11 years ago, the area is less famous than neighbors such as Stags' Leap and Rutherford, and the road to get there is far less busy.

Turning onto a narrow lane that wound up a ridge past gated homesteads, we were sure we had gone the wrong way. But we found Porter Family Vineyards — a 14-acre vineyard with a 17,000-square-foot underground winery started by a retired couple from Rochester, Minn. — at the base of the Vaca mountain range, 600 feet above the valley floor.

"You can see the whole valley from up here," said Kate Mallam, the office manager (and a Maple Grove native), who handed us glasses of Chardonnay at the start of our tour. She pointed out the Mayacamas range separating the Napa and Sonoma valleys, and Mount St. Helena, the highest peak in Wine Country. Closer was the dome-topped Mount George. In between were groomed terraces of vines, hedges overflowing with lavender, and a jaw-dropping view.

The Porters didn't want to disturb that view, or the grapes that grow there, so they built their winery into a cave beneath the vines. At the end of a dim, arched hallway lined with barrels, we entered an elegant private tasting chamber, where we sampled four reds, including what they call a Cave Dwellers Blend, paired perfectly with chocolate and cheese. 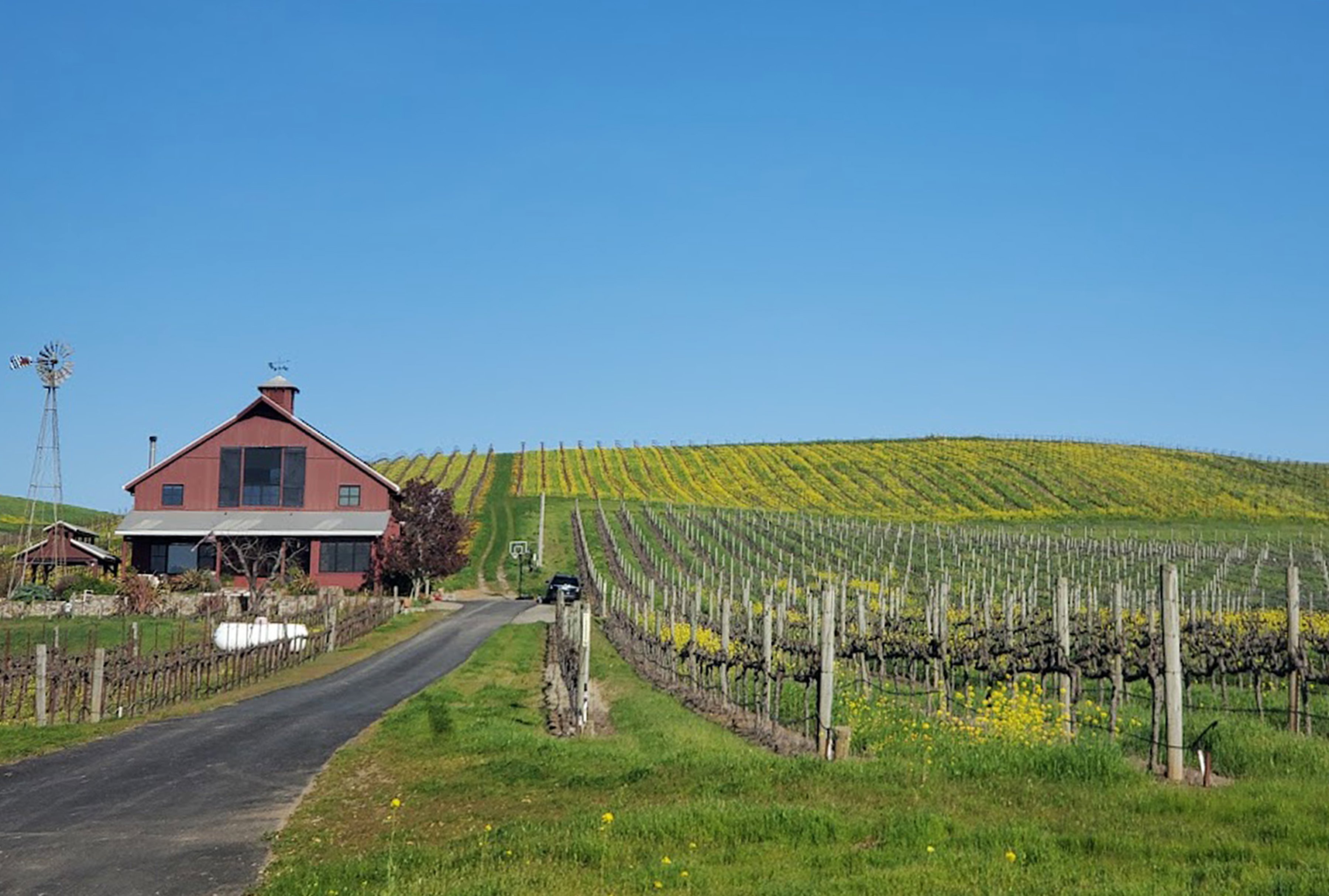 This roadside view was taken during a “wine safari” tour with Laces and Limos in Napa, Calif. (Minneapolis Star Tribune/TNS/Sharyn Jackson)
THE 'SAFARI' CONTINUES

The next day, our guided "wine safari" with the company Laces and Limos had us cruising in that eco-friendly tuk-tuk to some "exclusive" vineyards just west of downtown Napa. We had met our driver, Millie Manaoat, outside the Archer Hotel — possibly the city's hippest lodging, with a luxe and leathery lobby, a steakhouse and a rooftop bar.

My friends and I climbed into the three-wheeled vehicle stocked with nuts, pretzels and cans of bubbly, and we rolled down First Street, the central business neighborhood, toward Napa's outskirts. Soon, Manaoat steered us to a working cattle ranch that allots about 10% of its steep hillsides to vines. The owner, who considers himself a cowboy more than a wine guy, traces his ancestry back to one of the earliest grape-growers in the region.

We sat down at a picnic table in the shadow of a 120-year-old barn, and sampled five wines, including a dangerously easy-drinking rosé and a smooth red blend with a picture of a bull on the label. That same magnificent bull moseyed up to a fence nearby and eyed us as we sipped his wine.

He turned out to be a friendly drinking companion, and I walked over to pet him at his pen. I took another sip. There's probably a cardinal rule that you shouldn't judge a wine by its label, but mine tasted even better after getting to know the bovine on the bottle.

I never thought I'd come to Wine Country to meet a bull. Add it to the list of unexpected delights in Napa.