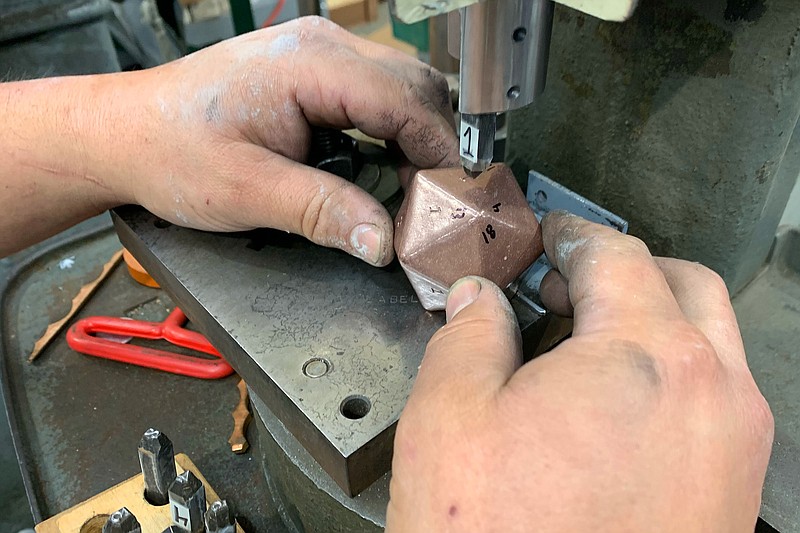 Woody Maringer uses a punch Friday, April 15, 2022, to stamp numbers onto the sides of a solid copper 20-sided die at Shire Post Mint in West Fork. The company has garnered a lot of attention for the products and for the videos of the items? casting on social media. Visit nwaonline.com/220424Daily/ for today's photo gallery. (NWA Democrat-Gazette/Andy Shupe)

WEST FORK -- Shire Post Mint, known for the fantasy coins it creates under license from franchises like Game of Thrones and The Lord of the Rings, is now using scrap from that process to cast a new line of products, from solid orbs to metallic mushrooms, and TikTok users are taking notice.

Mintmaster Woody Maringer said casting is a natural way to expand the mint's offerings, allowing it to utilize its scrap materials and assure the metal's purity. The mint's cast offerings so far are made mostly of copper, but Maringer said other metals, including brass and bronze, will be getting a look.

Maringer said he first began experimenting with casting scrap copper late last year, making various shapes with homemade molds and using a press to modify those shapes. He was experimenting one day with an orb, using a press to turn it into a icosahedron -- the now distinctive shape of a 20-sided dice made pop-culture famous by the game Dungeons and Dragons -- and it worked.

"I thought, maybe we have something here," Maringer said.

As a lark, Maringer added some music to a video he'd made of the process and tossed it up on TikTok. The result today is more than 7 million views on the video and some TikTok traction on the new line of items.

Helen Maringer, Shire Post's chief executive officer, said the casting process and its resulting products seem to resonate with TikTok users. A variety of videos on the aspects of the mint's production process have received a fair amount of views.

If and how that attention will result in sales is still unclear, she said but word of mouth is never a bad thing. The mint has more than 7,500 followers on the platform and more than 2 million likes.

"It's a different crowd for us," Helen Maringer said.

Anne Marie Velliquette, an associate marketing professor at the University of Arkansas's Walton School of Business said TikTok is a good place to reach potential customers, particularly younger ones, those in the Gen Z and even the Millennial demographic. She said other social media platforms are trying to copy TikTok's success in using engaging video content to draw in and keep viewer's attention. She added for sellers, TikTok can be a good place because it allows some forms of direct purchase through the site.

There are 1 billion monthly active uses on TikTok and it ranks as the top social media platform for engagement, with the average session lasting nearly 11 minutes, twice as long a second ranked Pinterest, according to marketing and sales platform hubspot.com.

"They're doing something right," Velliquette said of Shire Post's videos.

Shire Post Mint began in 2001, but it was in 2003 when the mint's founder, Tom Maringer, reached a deal with George R.R. Martin for the licensing of coins based on Martin's "A Song of Ice and Fire" books that later went on to become hit HBO series "Game of Thrones." Martin insisted that his licensing agreements with several small businesses, including Shire Post, be maintained as part of his deal with HBO.

The mint has been making coins under a variety of licensing agreements full time since 2010, and today manufactures more than 150 different coins, sold individually or in sets, and produces about 100,000 coins annually. Shire Post Mint, formerly located in Springdale, opened its new headquarters in West Fork, just south of Fayetteville, in October. The new location includes manufacturing operations, offices and a retail shop.

The company employs about 15 people and also produces its own unique items, including jewelry, wax seals and gifts.

Woody Maringer said the mint has added some molds to speed the casting process and it has a new induction furnace and other gear. He said the space afforded by the company's new location was key in the decision to add the cast products.

So far, the mint's casting offerings include orbs with various finishes, from smooth to hammered, to a patina that gives off a "salty cannonball vibe." There are oversized 20-sided dice, as well as unmarked icosahedrons. The products weight about a pound and a half and are an inch and a half to about two inches in diameter. Prices run from about $125 to $175.

Shire Post's mushrooms are molded from scrap copper, are hand hammered, given a heat patina and then set in a wooden base reminiscent of driftwood. They became available on Earth Day, April 22.

Woody Maringer said other cast products are being considered and help from the mint's customer base in the form of new ideas are pouring in. One he's considering is a doughnut with a bite taken out of it.

"We have plans to do more things," Maringer said. "It's been a lot of fun." 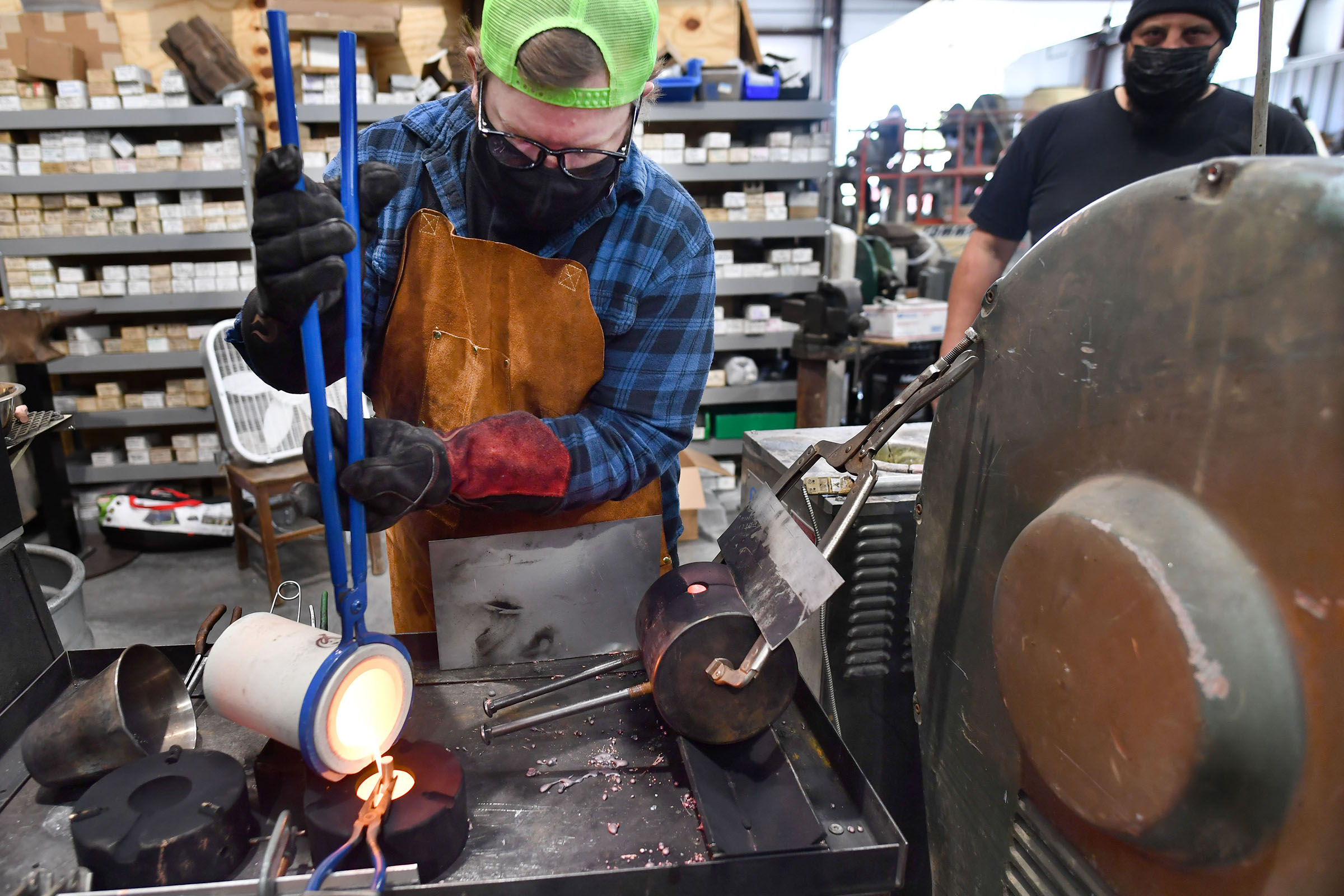 Ben Meehan fills a mold Friday, April 15, 2022, with melted copper as he casts a copper mushroom at Shire Post Mint in West Fork. The company has garnered a lot of attention for the products and for the videos of the items? casting on social media. Visit nwaonline.com/220424Daily/ for today's photo gallery. (NWA Democrat-Gazette/Andy Shupe)