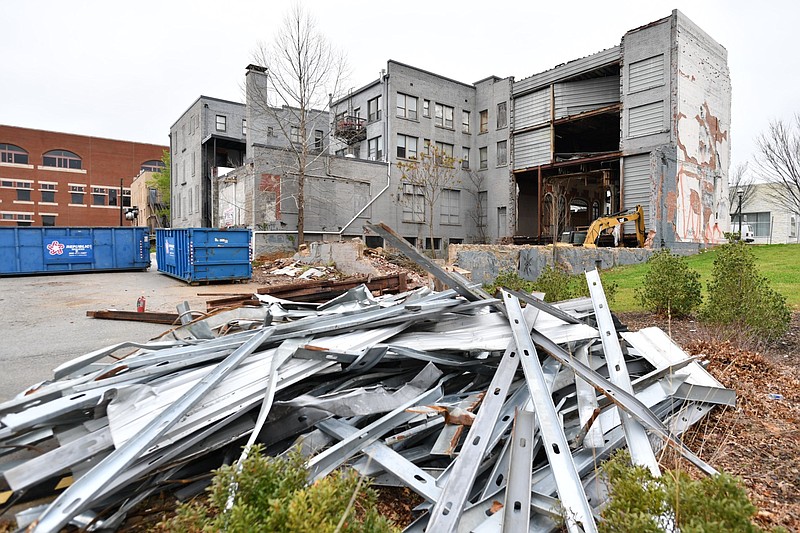 Work continues Wednesday, April 20, 2022, to demolish the former Mountain Inn building in downtown Fayetteville. The city has issued a permit to Car-Son Construction in North Little Rock to demolish the former hotel that has remained vacant and in disrepair since the late 1990s. (NWA Democrat-Gazette/Andy Shupe)

FAYETTEVILLE -- People walking on Center Street east of the downtown square 40 years ago may have heard the faint sounds of music coming from an underground bar full of entrepreneurs, lawyers and politicos.

Nowadays people have to stay mindful of potential falling debris coming from the building that once served as an annex to the former Mountain Inn hotel. A contractor started work last week to take down the structure, which has lain dormant for more than two decades.

The site of the Mountain Inn and its adjoining buildings has a storied history. The original hotel closed in 1994, but the building still stands, housing businesses such as Damgoode Pies, Taste of Thai and Petra Cafe.

The piece being demolished, farther east near Center Street and College Avenue, was built in 1930 and was known as the industrial finance building or the arcade building, according to "The Square Book: An Illustrated History of the Fayetteville Square, 1828-2016," by Anthony Wappel and Jerry Hogan. The Mountain Inn took the top two floors of the annex, giving the place more than 100 rooms. The annex has a wall abutting the original hotel, making it all look like one building from the outside.

A third expansion in 1961 was known as the Motor Lodge. That piece was demolished in 2005 in anticipation of a 12-story hotel and condominium development with shops and restaurants. That never happened.

Perhaps the most well-known feature of the arcade building was below. Known as the Gaslight Club in the 1960s, the spot became the Brass Monkey in 1975, according to "Good Times: A History of Night Spots and Live Music In Fayetteville, Arkansas," by Denele Campbell.

Proprietor Billie Schneider served as a key figure of the state's Democrat party at the time, and the place became a who's who of up-and-coming political figures. The Brass Monkey closed after Schneider's death in 1985 and became a few other short-lived clubs throughout the years until it went dormant for good by the early 2000s.

Jim Blair, philanthropist and former general counsel for Tyson Foods, said the Brass Monkey under Schneider had the feel of a private club where the booze and conversations flowed freely. A lot of the state's politics evolved from the place, he said.

"Late at night, things may have gotten pretty wild at times," Blair said. "But that's one of the pressure-cooker ventilators that society has to depend on."

Archie Schaffer III served as an aide for Clinton and Bumpers, and said the Brass Monkey wasn't really a spot for the college crowd. Schaffer was pretty much the young guy in the place.

Musical acts such as Levon Helm, Dr. John, the Leaving Trains and the Charles Tuberville Band brought crowds to the dance floor. Schaffer said he remembered the place was cold and dark and loud. Schneider served as the glue that kept the scene afloat, he said.

"It was the place people wanted to be and knew they could find other people they might want to talk to about business or politics or whatever," Schaffer said.

Woody Bassett, partner at Bassett Law Firm, had an office within the arcade building and would occasionally saunter into the underground bar during its heyday. A long hall led from the office to the hotel and dining room at the Mountain Inn, as well as the Town Club, which operated above the Brass Monkey, he said.

The building once served an important role in the community and provided a gathering place for a lot of people to connect and share ideas, Bassett said. The time is long overdue for the rest of the shuttered structure to come down, he said.

"Hopefully something nice can come in there and take its place. It's just a really visible place in downtown Fayetteville, and it's right there on College Avenue," Bassett said. "We have a beautiful downtown and this is one of the few pieces missing."

Car-Son Construction in North Little Rock was granted a permit from the city to demolish what's left of the arcade building of the Mountain Inn. Justin Stewart with Car-Son said there's no timetable on the demolition work, but it will take a while.

The building has become an open safety violation, said Jonathan Curth, the city's development services director. There's a potential for pieces of the exterior to fall down onto the public sidewalk below. City staff have worked with the property owner for more than a year on a solution, he said.

The city has authority to ensure a vacant building is secure and poses no threat to the public, Curth said. But that's about where the city's authority ends, he noted.

The property would have to become part of a district protected under the city's preservation ordinance to enforce any measures outside of structural integrity and safety, Curth said. A majority of property owners within the district would have to agree to be part of it.

The property is owned by NWAP LLC in Mountain Home, which bought it in 2014 for $1.1 million, according to Washington County property records. The company is registered to Mountain Home attorney Mark Carney, who died in December.

Developers John Nock and Richard Alexander had plans in the early 2000s to build a high-rise luxury hotel and condominium project called the Renaissance Tower in place of the Motor Lodge. The developers partially demolished the structure in 2005 and a crane loomed over the site for a couple of years before a public parking lot went in.

The Renaissance Tower project never came to fruition, and Nock and Alexander defaulted on a $3.9 million loan for the property. The Bank of Fayetteville paid $1.25 million for the foreclosed property in 2013 before NWAP LLC bought it.

Around the time Nock and Alexander bought the property, the City Council created a tax increment finance district to pay for demolition of the old structure. The district allowed a portion of property taxes generated by properties within its borders to go toward removing the blight.

Financing on the project fell through, and Nock and Alexander had to make good on more than $300,000 in liquidated damages to the city. They pledged to pay that amount if the hotel wasn't completed by September 2007. 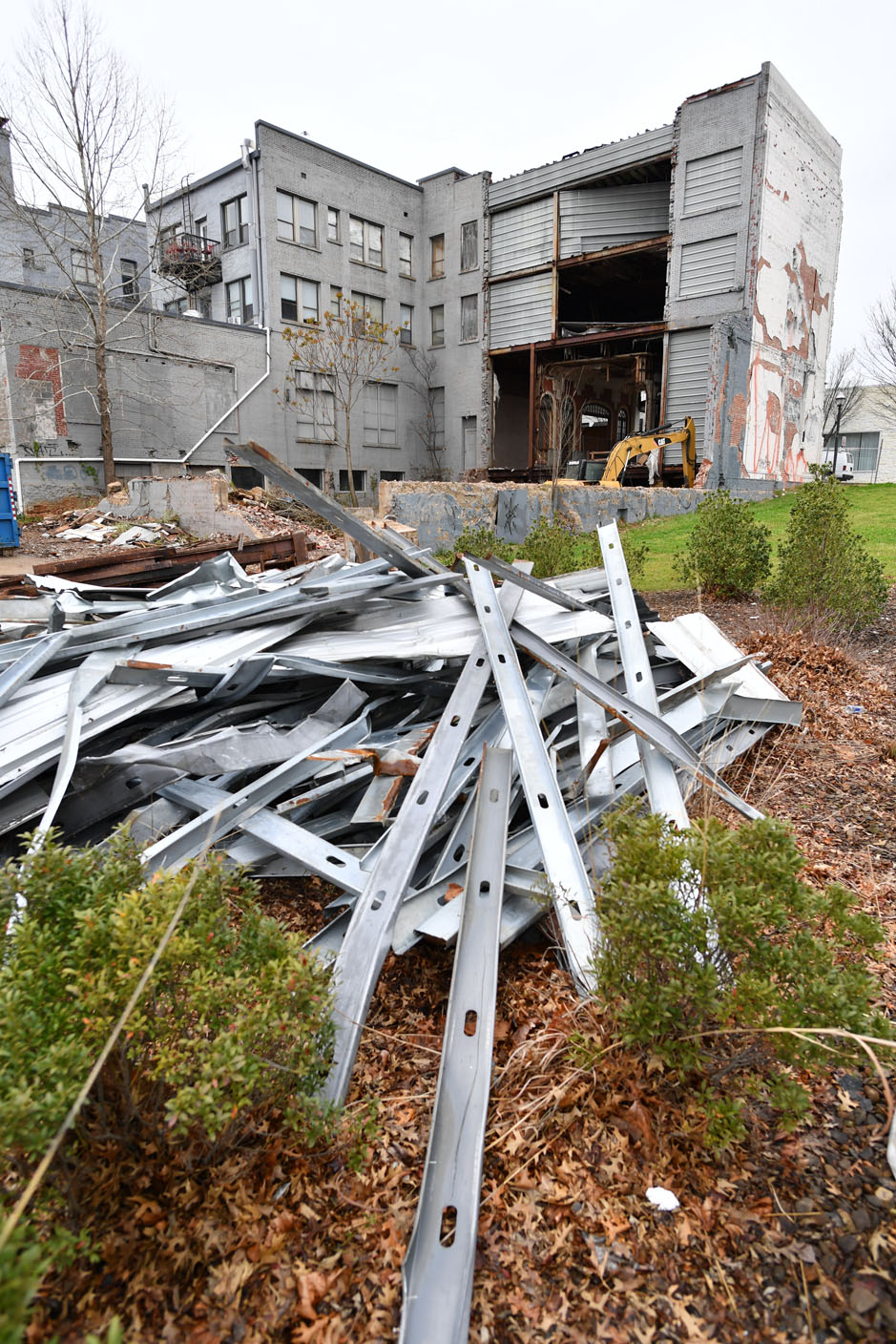 Work continues Wednesday, April 20, 2022, to demolish the former Mountain Inn annex building in downtown Fayetteville. The city has issued Car-Son Construction in North Little Rock a permit to demolish the former space that has remained vacant and in disrepair for more than two decades. Visit nwaonline.com/220424Daily/ for today's photo gallery. (NWA Democrat-Gazette/Andy Shupe) 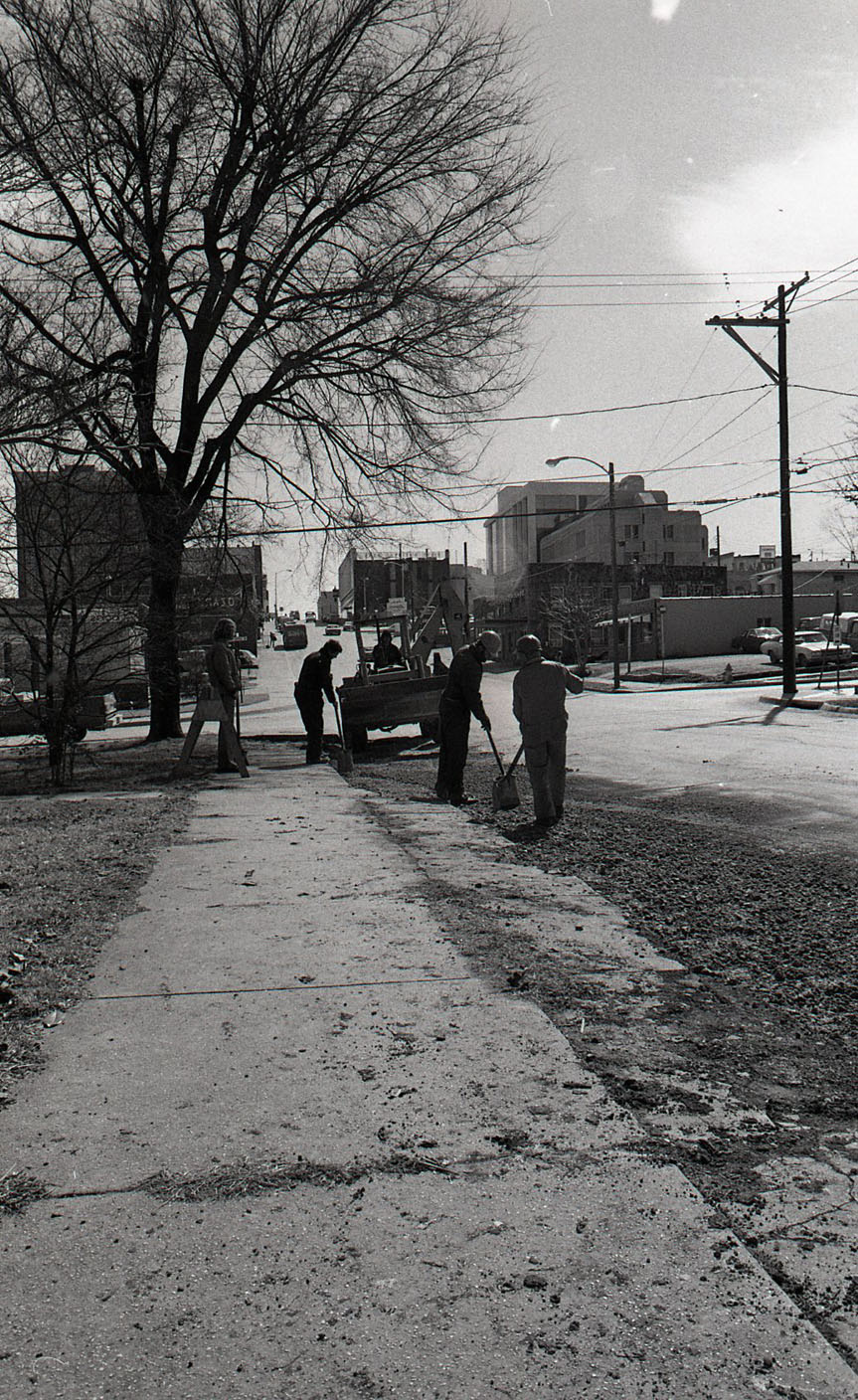 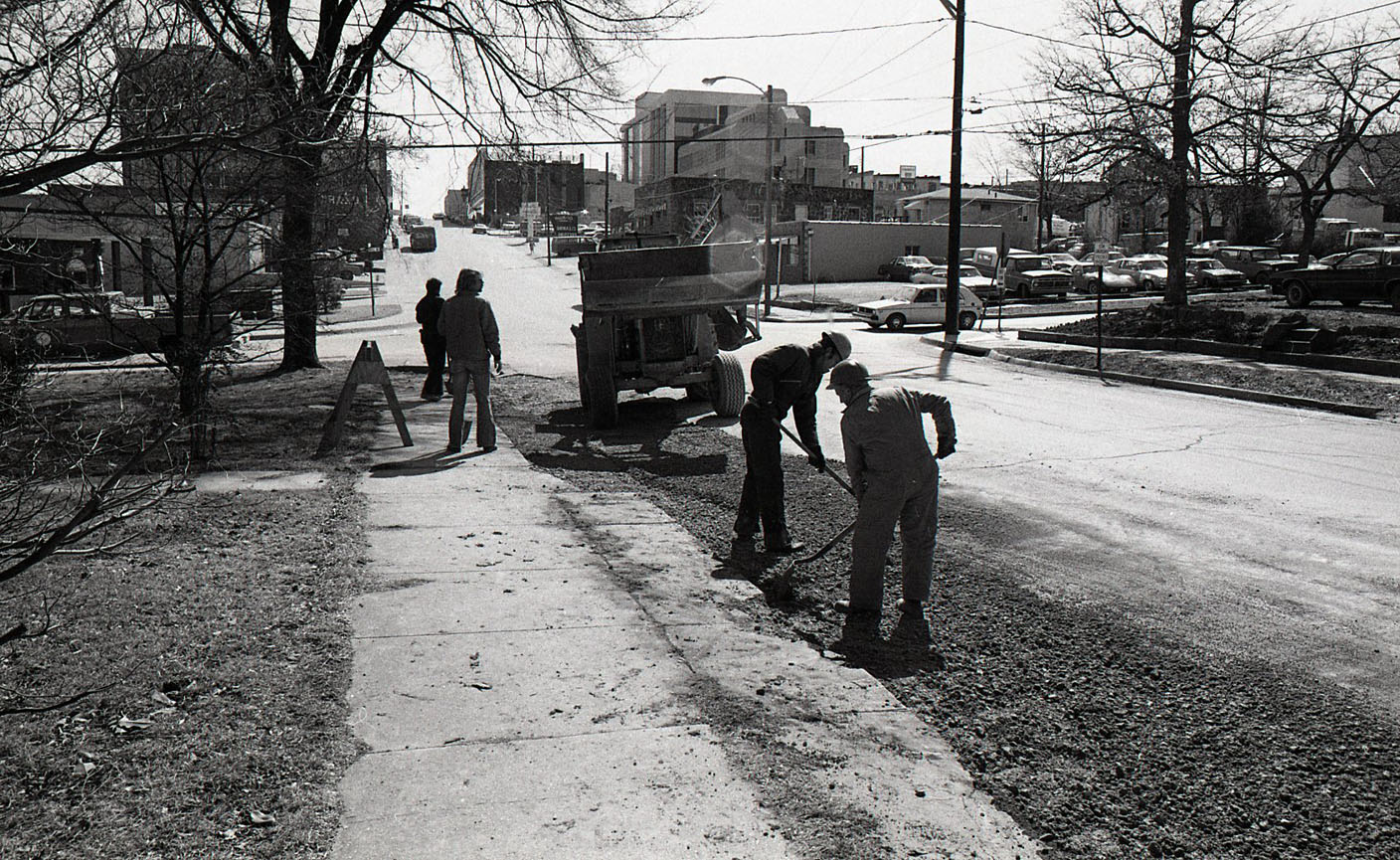 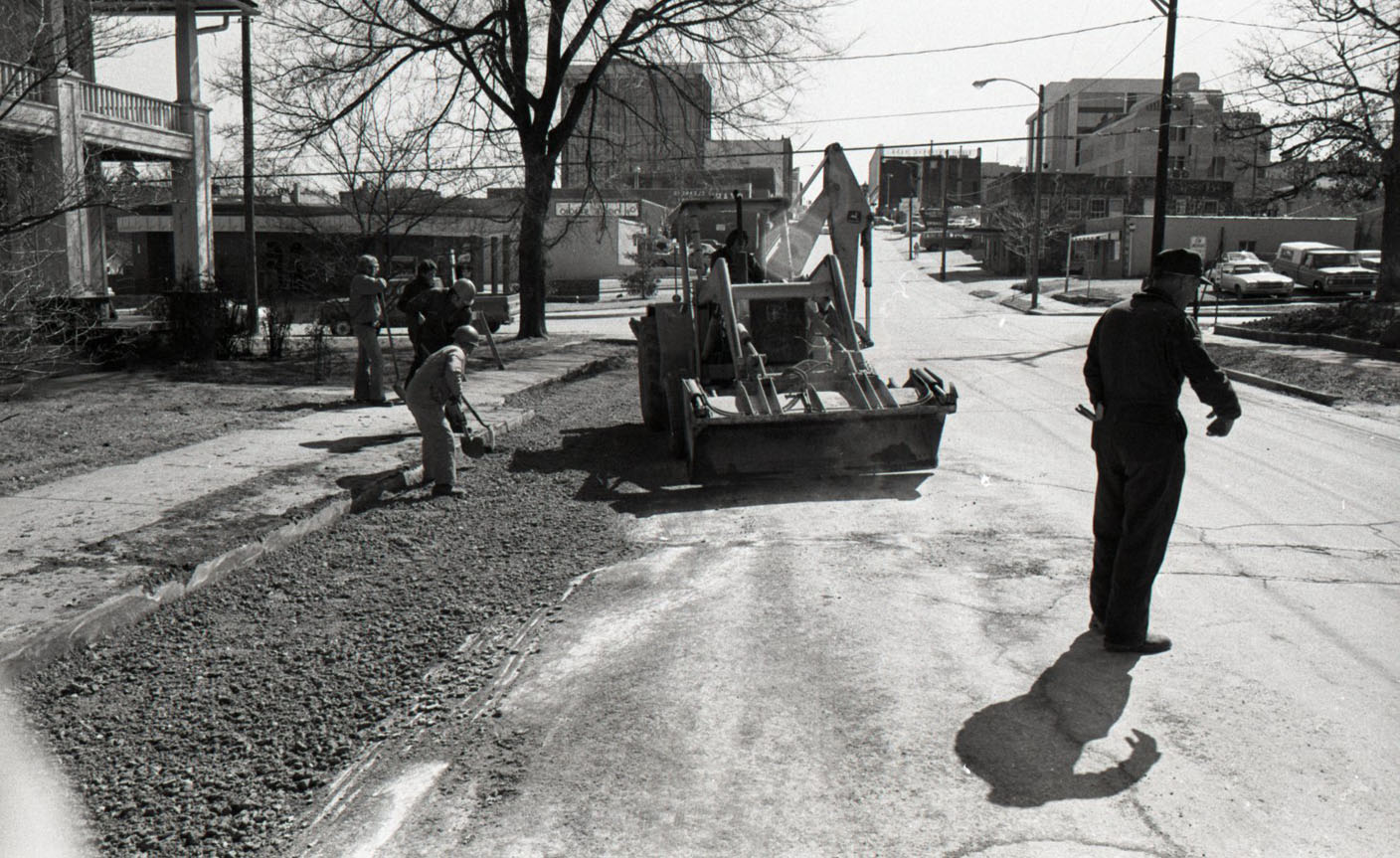 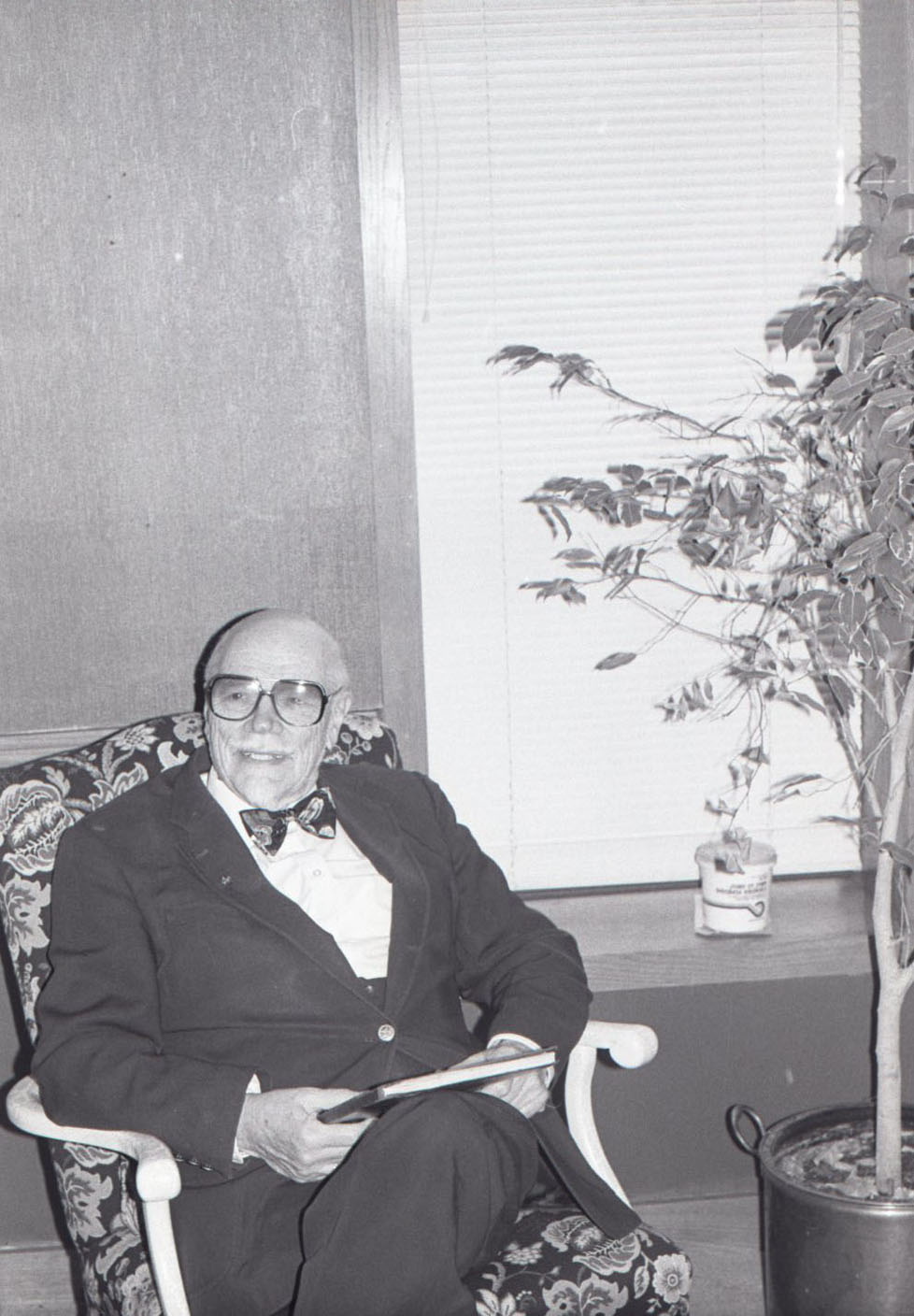 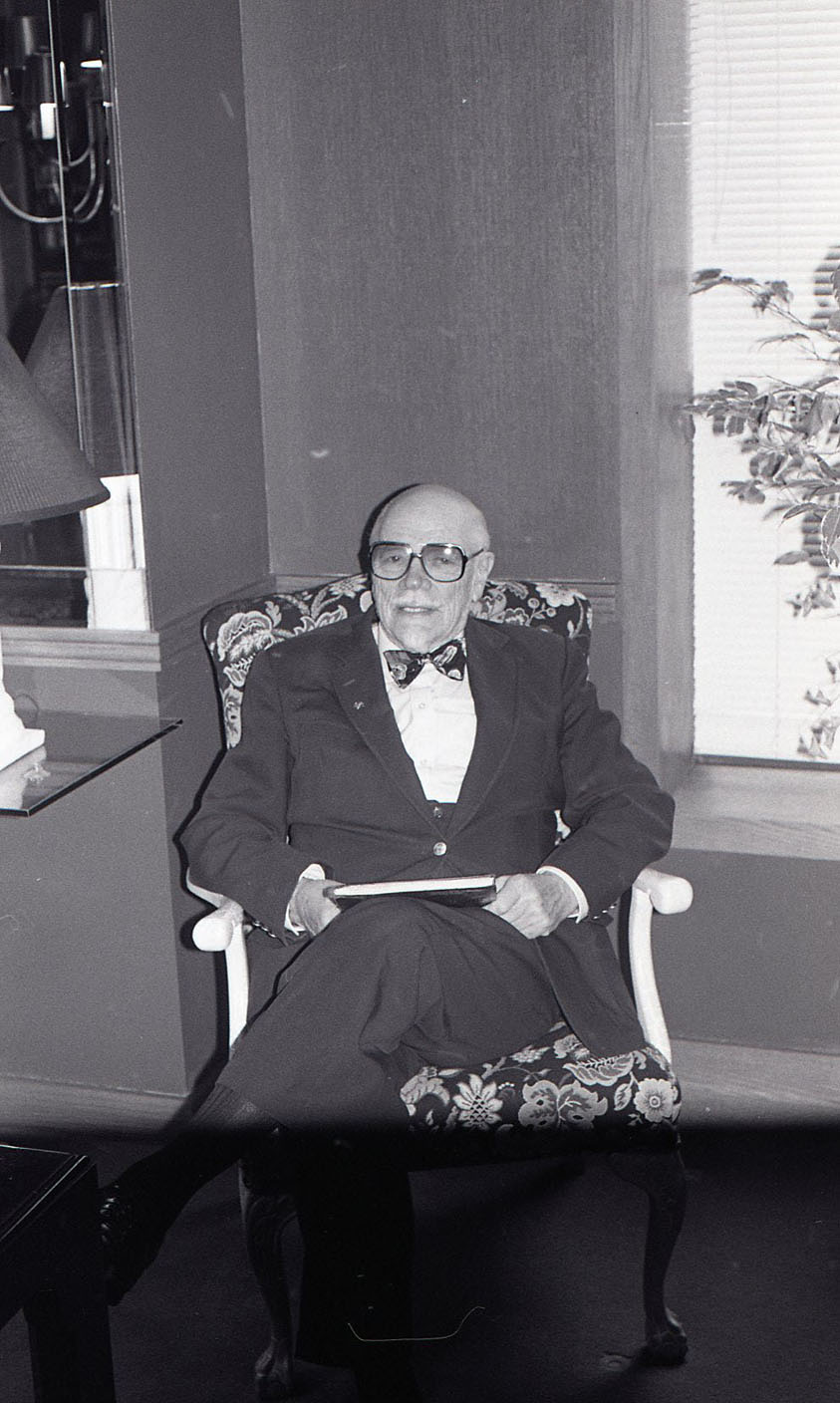 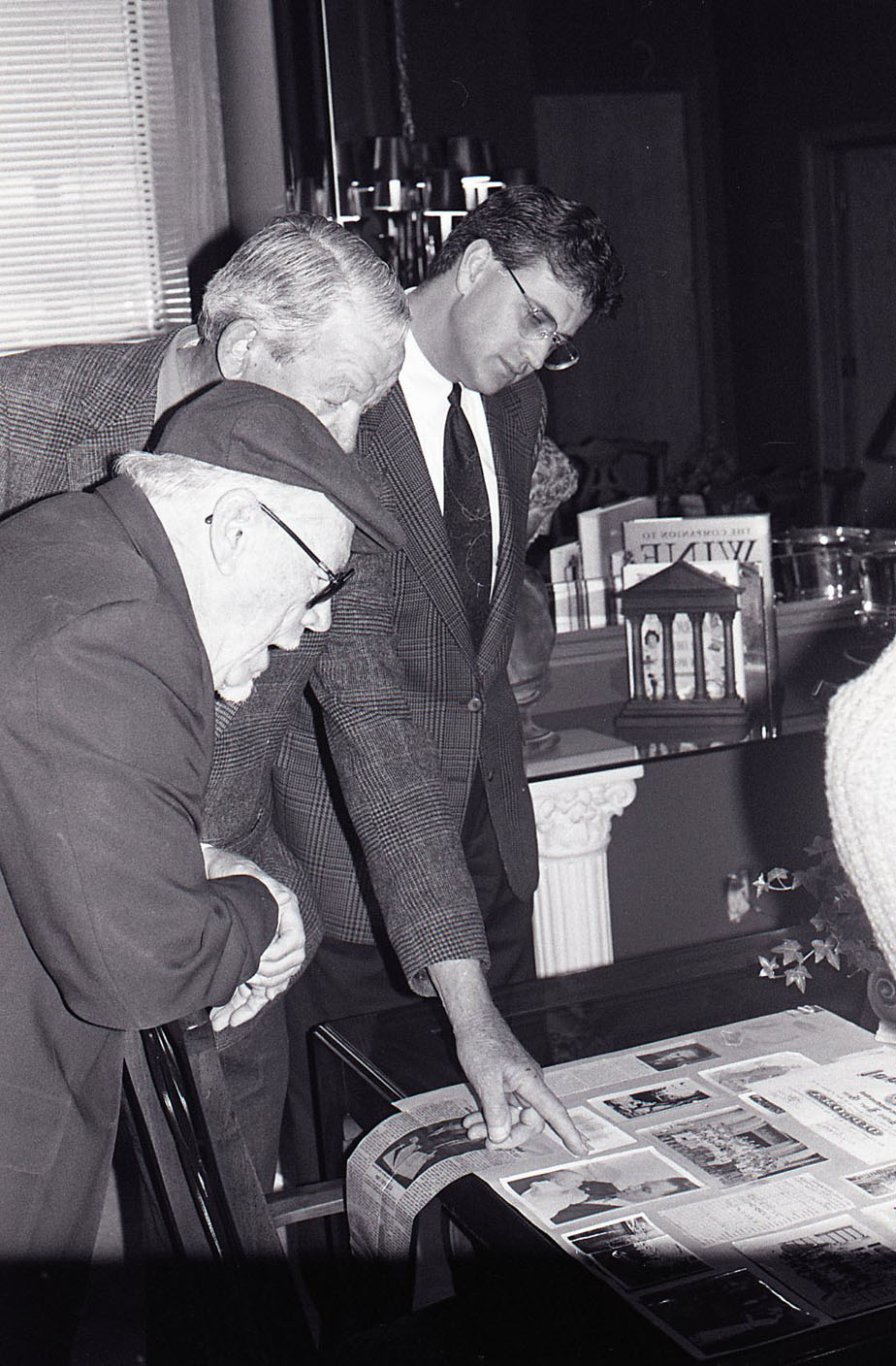 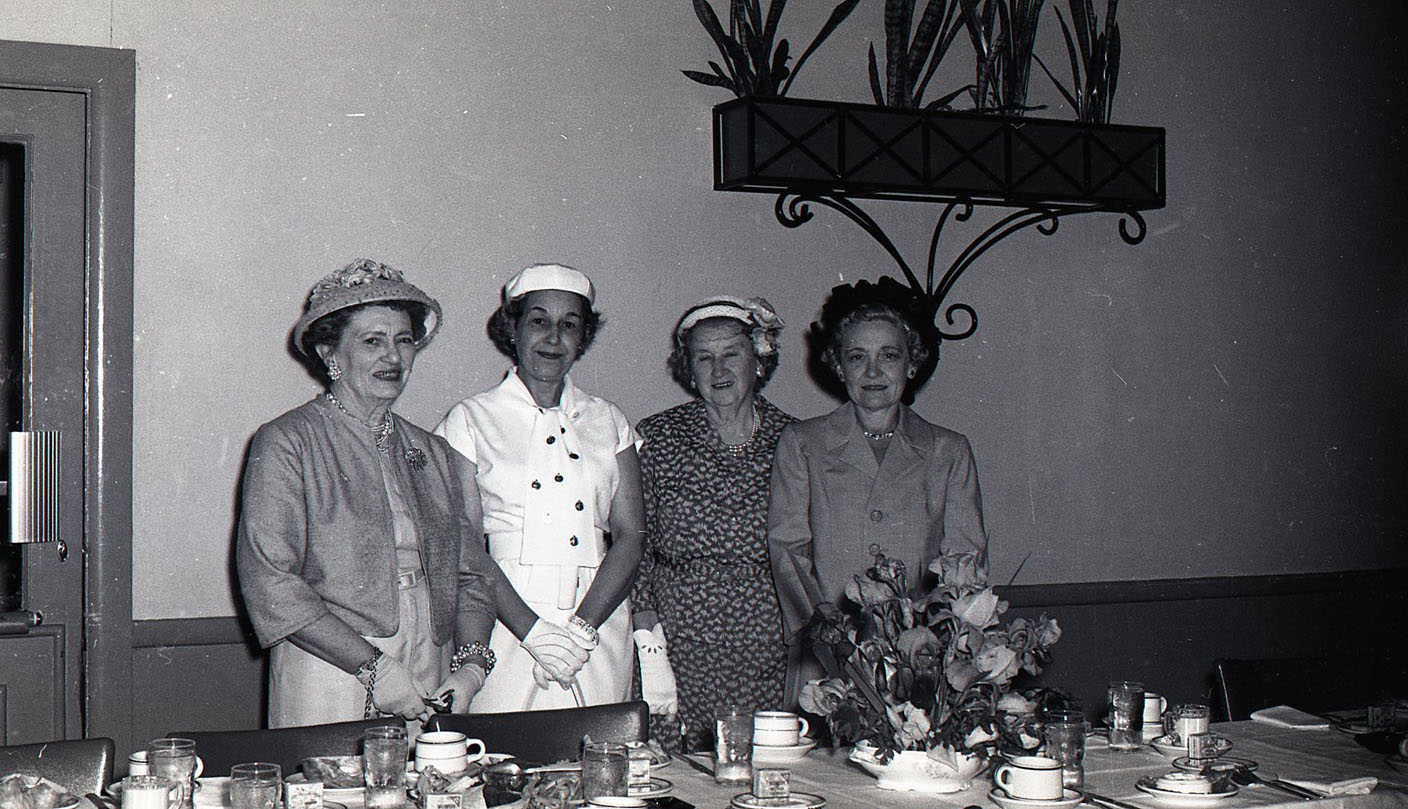 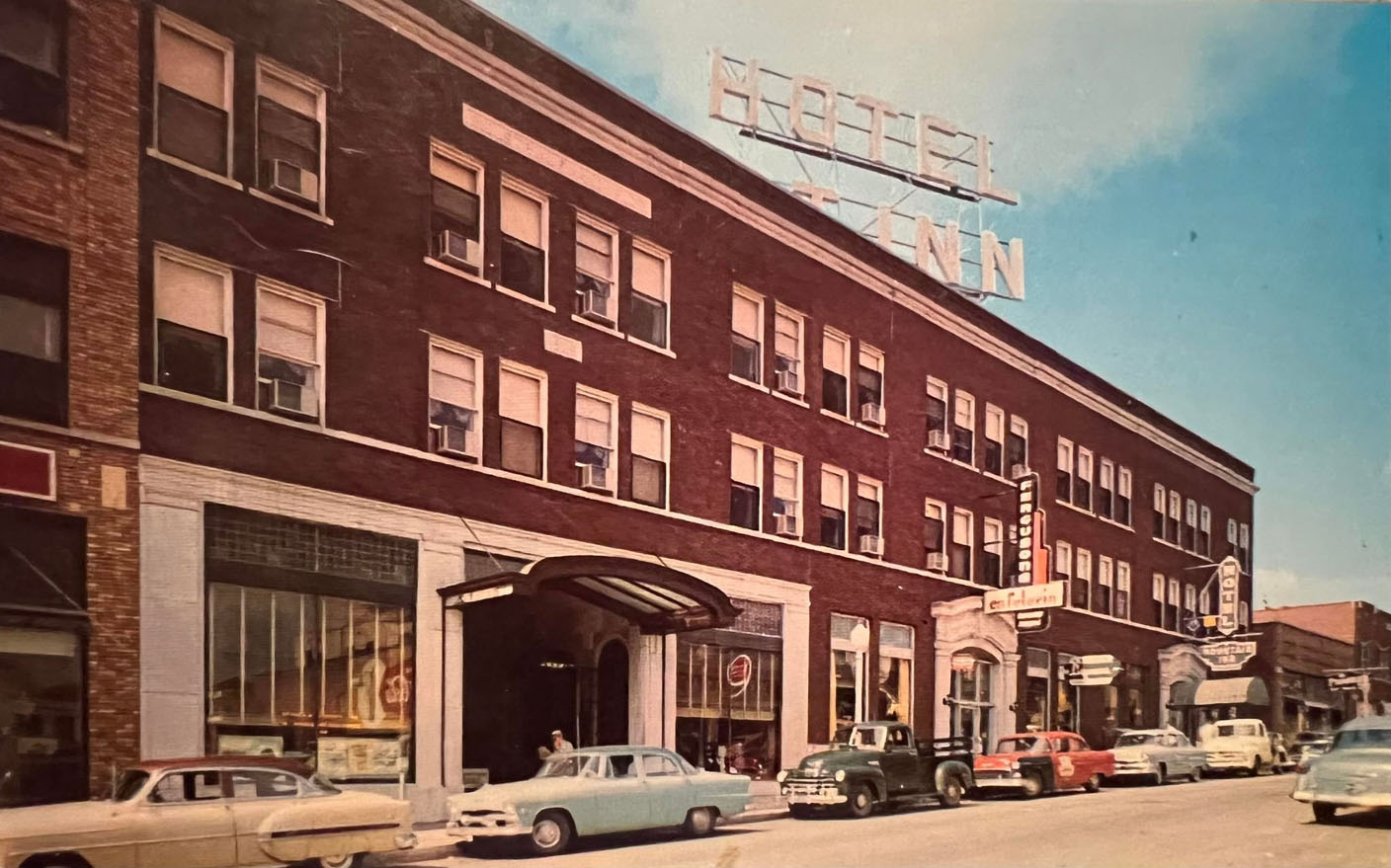 A postcard shows what the former Mountain Inn building and its annex to the east near Center Street and College Avenue in Fayetteville looked like circa 1957. The annex portion of the building is in the middle of demolition. (Courtesy/Charles Alison)