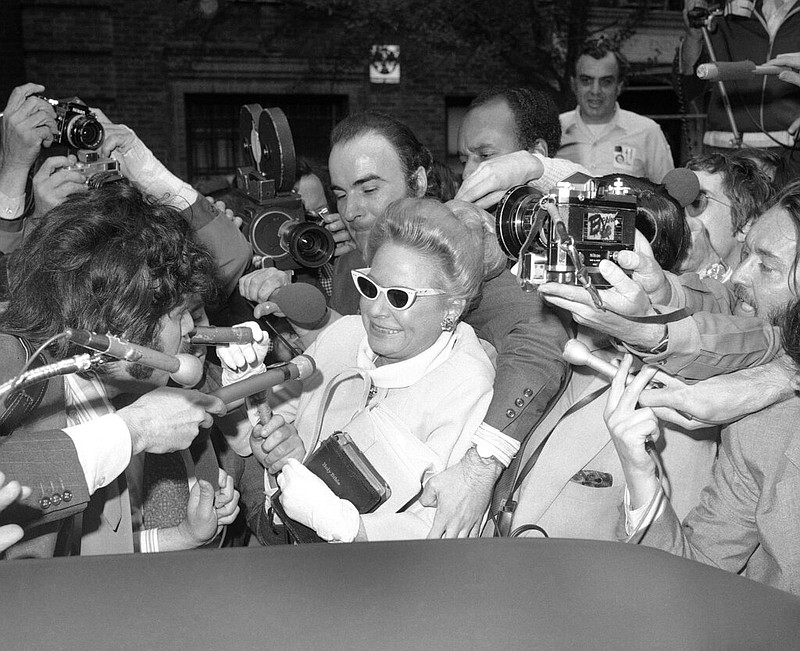 Pine Bluff native Martha Beall Mitchell carries a worn Bible as she makes her way through throngs of newsmen to give a deposition about the Watergate case to a lawyer in New York City in this May 3, 1973 file photo. Mitchell was the wife of John Mitchell, who served as attorney general under President Richard M. Nixon. When Martha Mitchell was asked why she was carrying a Bible to the deposition, she quipped, “I wouldn’t want to have to swear on a dictionary.” (AP Photo)

This article is a reprint from the Explore Pine Bluff Blog because of anticipated interest in the upcoming Starz series "Gaslit" highlighting the role that Pine Bluff"s Martha Mitchell played in the Watergate scandal of the 1970s. The series premieres at 7 p.m. today and stars Julia Roberts as Martha Mitchell and Sean Penn as her husband, U.S. Attorney General John Mitchell.

Did you know that one of the Watergate era's most polarizing figures was a Pine Bluff native?

Meet Martha Elizabeth Beall Mitchell, the wife of John Mitchell, United States attorney general under President Richard Nixon. She became a controversial figure with her outspoken comments about the government at the time of the Watergate scandal.

Martha Beall Mitchell, the daughter of Arie Ferguson and George V. Beall, was born in Pine Bluff on Sept. 2, 1918. She grew up in the city, graduated from Pine Bluff High School and attended Stephens College in Columbia, Mo., and the University of Arkansas. She completed her Bachelor of Arts degree requirements at the University of Miami in Florida.

She first married Clyde Jennings Jr. of Lynchburg, Va., whom she divorced. She then married John Mitchell, who was appointed U.S. attorney general by President Richard Nixon. Martha Beall Mitchell won worldwide recognition by her outspokenness during the Nixon administration.

In fact, she holds the distinction of being the very first Watergate whistleblower. Because she was a woman in a man's world calling attention to political misdeeds, she was written off as crazy, unstable and an alcoholic. Her enemies stopped at nothing to discredit her.

The birthplace and childhood home of Martha Beall Mitchell, now the Martha Beall Mitchell Home and Museum, was added to the National Register of Historic Places in January 1978. On the second anniversary of her death, Martha Mitchell Expressway in Pine Bluff was named for her. Three years later to the day, a bust was erected in her honor at the Pine Bluff Civic Center with a plaque that reads "Ye shall know the truth and the truth shall make you free." She is buried in the family plot at Pine Bluff's Bellwood Cemetery.

Though Martha Beall Mitchell paid a hefty price for what she did, her story continues to be an inspiration to writers and artists. Three years after her death, Washington newswoman and Mitchell-collaborator Winzola McLendon released a book called Martha.

Martha Mitchell was portrayed in the 1995 film "Nixon" by actress Madeline Kahn who, like Mitchell, died at the age of 57 of cancer. In 2004, a three-act play, "This is Martha Speaking..." by Thomas Doran, premiered in Pine Bluff, starring Lee Anne Moore as Martha Mitchell and Michael Childers as John Mitchell. That same year, a one-woman play about Mitchell, Dirty Tricks by John Jeter, appeared off-Broadway.

The first episode of the podcast "Slow Burn," entitled "Martha," chronicled her role in the Watergate scandal. There's even a psychological phenomenon named after her. The Martha Mitchell Effect is the process by which a psychiatrist, psychologist, other mental health clinician, or a medical professional, labels the patient's accurate perception of real events as delusional and misdiagnoses accordingly.

This article is among features at ExplorePineBluff.com, a program of the Pine Bluff Advertising and Promotion Commission. Sources: Pine Bluff and Jefferson County, A Pictoral History; Wikipedia. 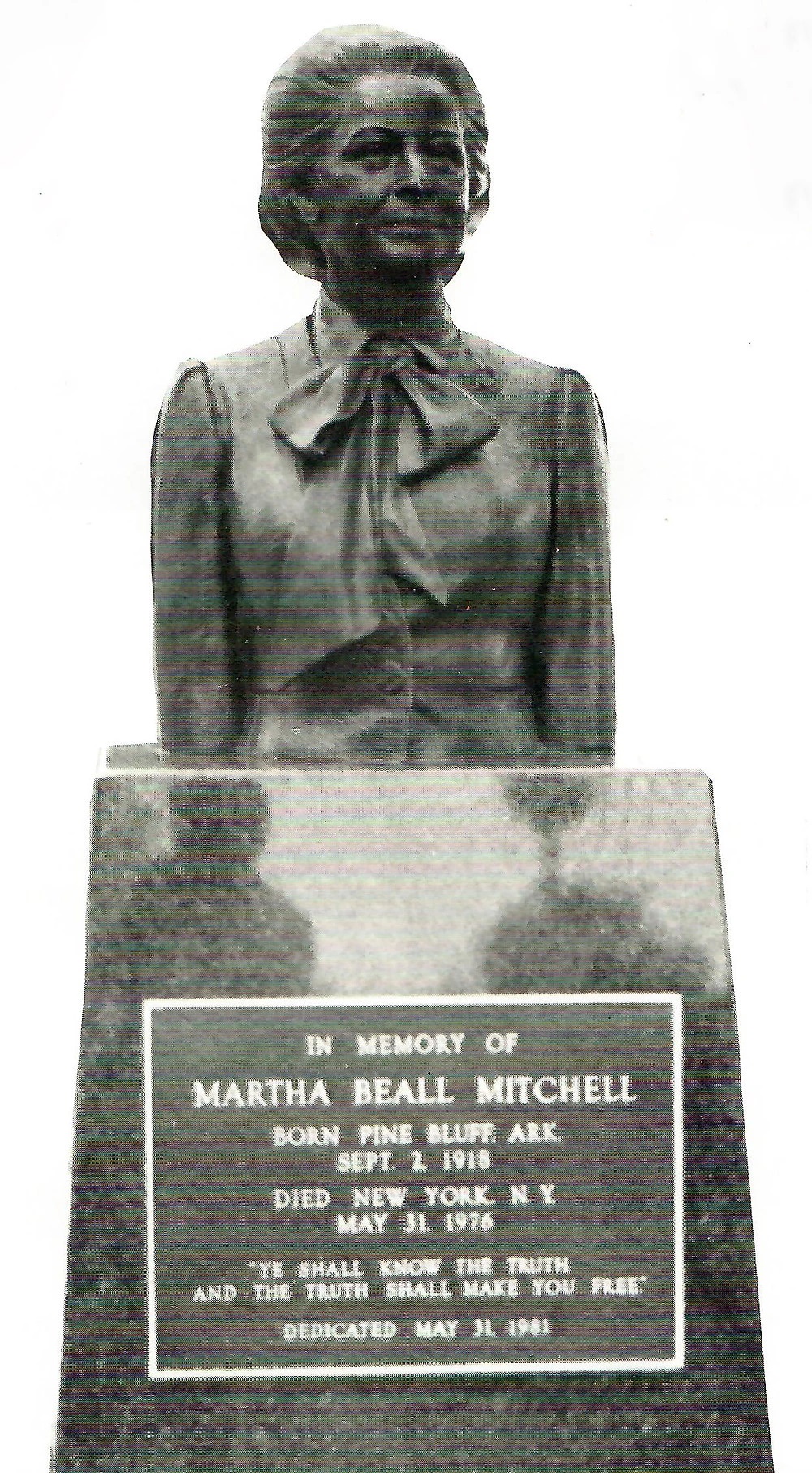 The bronze bust of Martha Beall Mitchell, wife of Attorney General John Mitchell, was dedicated on the fifth anniversary of her death, May 31, 1981. (Special to The Commercial/James W. Leslie/Explore Pine Bluff.com)