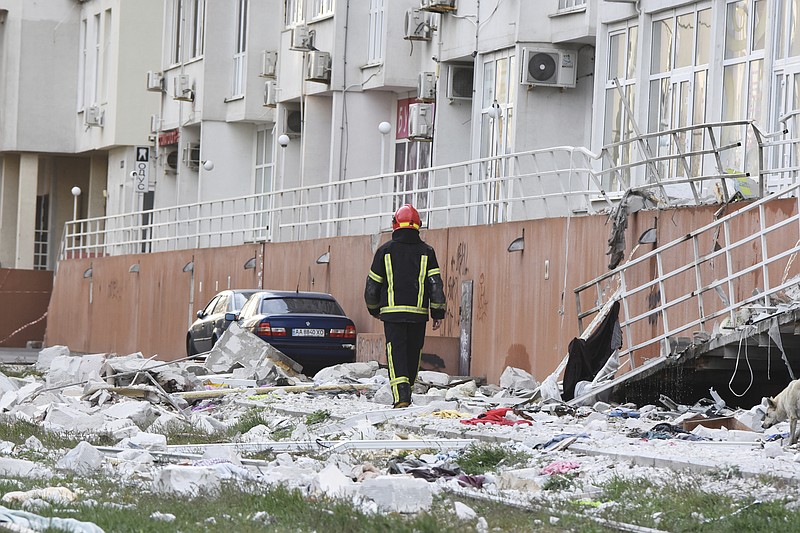 KYIV, Ukraine -- As the Russian invasion of Ukraine continues, Ukrainian President Volodymyr Zelenskyy announced that he will meet today in his nation's capital with U.S. Secretary of State Antony Blinken and Defense Secretary Lloyd Austin.

Speaking at a news conference Saturday, Zelenskyy gave little detail about the logistics of the encounter but said he expected concrete results -- "not just presents or some kind of cakes, we are expecting specific things and specific weapons."

The news conference was held in a Kyiv subway station. The subway system, which includes the world's deepest station, attracted widespread attention early in the war when hordes of people took shelter there.

Regarding the visit today by U.S. officials, Zelenskyy said: "I believe that we will be able to get agreements from the United States or part of that package on arming Ukraine, which we agreed on earlier. Besides, we have strategic questions about security guarantees, which it is time to discuss in detail, because the United States will be one of those leaders of security countries for our state."

The meeting would mark the first high-level U.S. trip to Kyiv since the war began Feb. 24. While visiting Poland in March, Blinken stepped briefly onto Ukrainian soil to meet with the country's foreign minister. Zelenskyy's last face-to-face meeting with a U.S. leader came Feb. 19, with Vice President Kamala Harris.

Zelenskyy on Saturday also reiterated his desire to have an in-person meeting with Russian President Vladimir Putin in the hope of ending the war, which has gone on for two months.

"I consider that this war can be stopped by the one who began it," he said.

But Zelenskyy made clear that Russia's "words do not coincide with their actions" when it comes to negotiations, and he said he had no room to be concerned over what it might mean to meet with Putin.

In attacks Saturday on the eve of Orthodox Easter, Russian forces pounded cities and towns in southern and eastern Ukraine.

"The war started when this baby was one month old. Can you imagine what is happening?" Zelenskyy said. "They are just bastards. ... I don't have any other words for it, just bastards."

"Residents of the city heard explosions in different areas," Gerashchenko said via the Telegram messaging app. "Residential buildings were hit. It is already known about one victim. He burned in his car in a courtyard of one of the buildings."

In the Luhansk area of the Donbas, Gov. Serhiy Haidai said six people died during the shelling of Gorskoi village.

While British officials say Russian forces have not gained significant new ground, Ukrainian officials announced a nationwide curfew ahead of Easter, a sign of the war's disruption and threat to the entire country.

The fate of the Ukrainians in the besieged seaside steel mill in Mariupol wasn't immediately clear. Russia says its forces have taken the rest of the city.

An adviser to Ukraine's presidential office, Oleksiy Arestovich, said Russian forces resumed airstrikes on the Azovstal plant and were also trying to storm it, in an apparent reversal of tactics. Two days earlier, Putin had given an order not to send troops in but instead to blockade the plant.

Ukrainian officials have estimated that about 2,000 of their troops are inside the plant along with civilians sheltering in its underground tunnels.

Earlier Saturday, the Azov Regiment of Ukraine's National Guard, which has members holed up in the plant, released video of about two dozen women and children. Its contents could not be independently verified, but if authentic, it would be the first video testimony of what life has been like for civilians trapped underground there.

The video shows soldiers giving sweets to children who respond with fist-bumps. One young girl says she and her relatives "haven't seen neither the sky nor the sun" since they left home Feb. 27.

"We want to see peaceful skies; we want to breathe in fresh air," one woman in the video said. "You have simply no idea what it means for us to simply eat, drink some sweetened tea. For us, it is already happiness."

Mariupol has been a key Russian objective and has taken on outsize importance in the war. Completing its capture would give Russia its biggest victory yet, after a nearly two-month siege reduced much of the city to a smoking ruin.

It would deprive Ukraine of a vital port, free up Russian troops to fight elsewhere and establish a land corridor to the Crimean Peninsula, which Moscow seized in 2014. Russia-backed separatists control parts of the Donbas.

More than 100,000 people -- down from a prewar population of about 430,000 -- are believed to remain in Mariupol with scant food, water or heat. Ukrainian authorities estimate that more than 20,000 civilians have been killed in the city.

Satellite images released last week showed what appeared to be two recently excavated mass grave sites next to cemeteries in two towns near Mariupol, and local officials accused Russia of burying thousands of civilians to conceal the slaughter taking place there. The Kremlin has not commented on the images.

Yet another attempt to evacuate women, children and older adults from Mariupol failed Saturday. Petro Andryushchenko, an adviser to Mariupol's mayor, said Russian forces did not allow Ukrainian-organized buses to take residents to Zaporizhzhia, a city 141 miles to the northwest.

"At 11 o'clock, at least 200 Mariupol residents gathered near the Port City shopping center, waiting for evacuation," Andryushchenko posted on Telegram. "The Russian military drove up to the Mariupol residents and ordered them to disperse, because now there will be shelling."

At the same time, he said, Russian buses assembled about 200 yards away. Residents who boarded those were told they were being taken to separatist-occupied territory and were not allowed to disembark, Andryushchenko said. His account could not be independently verified.

The last time Russia invaded Ukraine, in 2014, world leaders booted Russia out of the Group of Eight industrialized nations, which quickly rebranded itself the Group of Seven.

Eight years later, the G-7 is still holding at seven -- a collection of countries that meet to talk through big issues such as trade, economics and security.

In recent days, as global leaders gathered in Washington for spring meetings involving officials from the International Monetary Fund, the World Bank, the G-7 and the larger Group of 20, it quickly became apparent that despite Russia's ongoing assault on Ukraine, its membership in the G-20 remains intact.

While Russia has been rendered a pariah country by Western states, it will remain part of the G-20 and associated organizations unless member countries achieve a consensus that it should go. Several countries -- including China, Brazil and South Africa -- have made clear that they will support Russia's membership in the G-20, which represents industrial and emerging-market countries.

IMF Managing Director Kristalina Georgieva, when asked about the prospect of kicking Russia out of the G-20, avoided calling for its ouster.

"There are clearly very, very unsettling facts we have to deal with," she said of Russia. But then she pivoted to focusing on the "need for cooperation" to solve big world problems.

"Make a list of questions that no country can solve on its own," she said, "and it's obvious that cooperation must continue."

Nadia Calvino, Spain's economy minister and chair of the IMF advisory committee, lamented that the meeting had "obviously not been business as usual."

"Russia's war against Ukraine has made it impossible to come to a consensus on a communique," she said, adding that the committee "has traditionally worked on the basis of consensus, so when one member breaks away, we cannot reach the agreement that the overwhelming majority of us would have wanted."

The World Bank said it stopped all of its programs in Russia and allied Belarus after the invasion in late February and has not approved any new investments in Russia since 2014 or in Belarus since mid-2020. The IMF said it hasn't lent money to Russia in decades and supports no programs there.

The dispute at the IMF meeting highlighted the problems that government leaders are likely to face in Indonesia in November, when G-20 leaders are set to gather in Bali. President Joe Biden has called for Russia to be kicked out of the group, but the U.S. has not said whether Biden would boycott the gathering if Russia participated.

The U.S. and Canada have been the biggest critics of Russia's membership.

U.S. Treasury Secretary Janet Yellen and Canadian Finance Minister Chrystia Freeland were among a number of officials who walked out of a G-20 meeting Wednesday when Russia's representative started talking.

Freeland tweeted last week: "This week's meetings in Washington are about supporting the world economy -- and Russia's illegal invasion of Ukraine is a grave threat to the global economy. Russia should not be participating or included in these meetings."

But several countries have been vocal about rejecting measures to remove Russia. They've argued that engagement is more important than isolation in troubled times.

"To expel Russia would only isolate it and make it more difficult to achieve constructive engagement," said Clayson Monyela, a spokesman for South Africa's Department of International Relations and Cooperation. "South Africa believes it is more useful to keep Russia in and to engage with it to find the lasting peace that we are all yearning for."

South African President Cyril Ramaphosa has blamed NATO for the war in Ukraine.

Brazilian Foreign Minister Carlos Franca said at a news conference in Brasilia that excluding Russia "doesn't help us find a solution to the immediate problem that we have," which is the need to cease hostilities and have Russia and Ukraine negotiate a lasting peace.

"Boycotting is not sustainable," he said. "There should be efforts to try to shame Russia. It would be a mistake for the U.S. to take its ball and go elsewhere, because we would leave a hole in the G-20 to be controlled by China."

Chinese Foreign Ministry spokesperson Wang Wenbin said last month that Russia remains an "important member" of the G-20 and that no member has the right to expel another.

The G-20 should "practice genuine multilateralism, strengthen solidarity and cooperation, and work together to address outstanding challenges in the areas of economics, finance and sustainable development," Wang said.

Josh Lipsky, senior director of the Atlantic Council's GeoEconomics Center, said Russia has the most to gain from the discord that comes from the U.S. calling for its removal.

"By showing up, they're potentially derailing the whole G-20," he said of the Russians. "That's giving them more control than they should have. If the U.S. boycotts, then the G-20 falls apart, and that's to Russia's benefit." 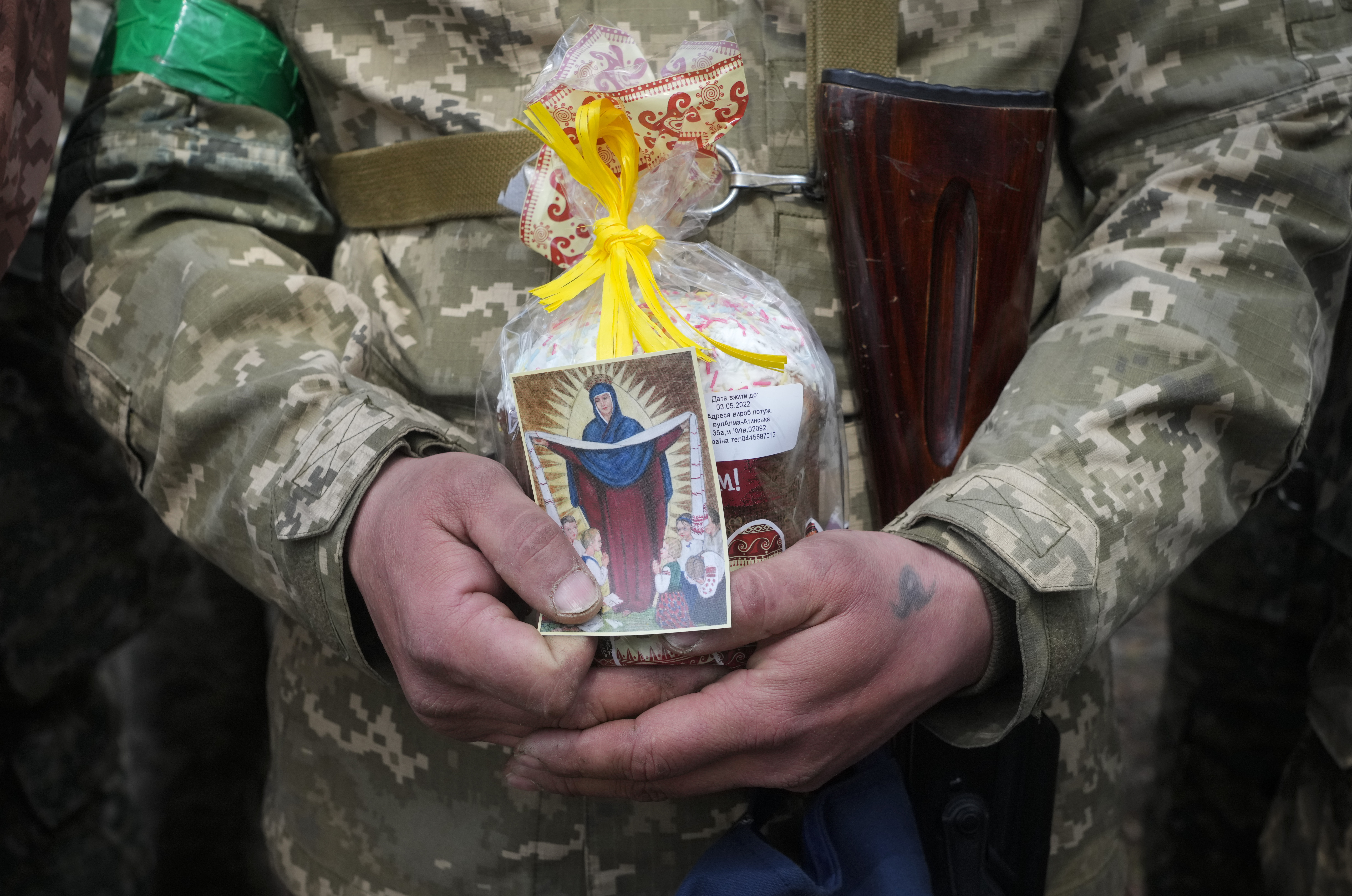 A Ukrainian soldier holds an Easter cake and an icon during a blessing ceremony on Easter eve at a military position outside Kyiv, Ukraine, Saturday, Apr. 23, 2022 (AP Photo/Efrem Lukatsky) 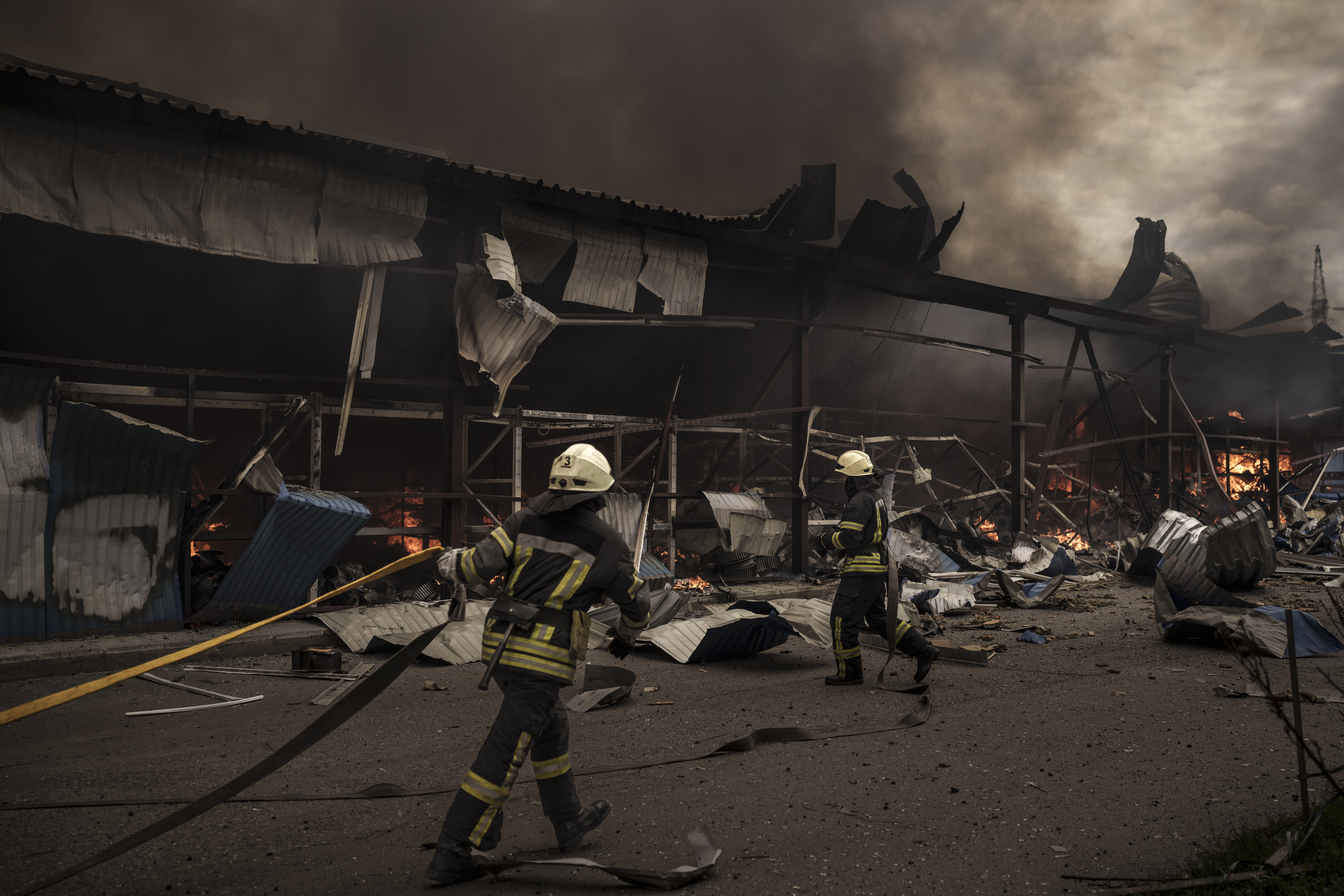 Firefighters work to extinguish a fire on a warehouse amid Russian bombardments in Kharkiv, Ukraine, Saturday, April 23, 2022. (AP Photo/Felipe Dana) 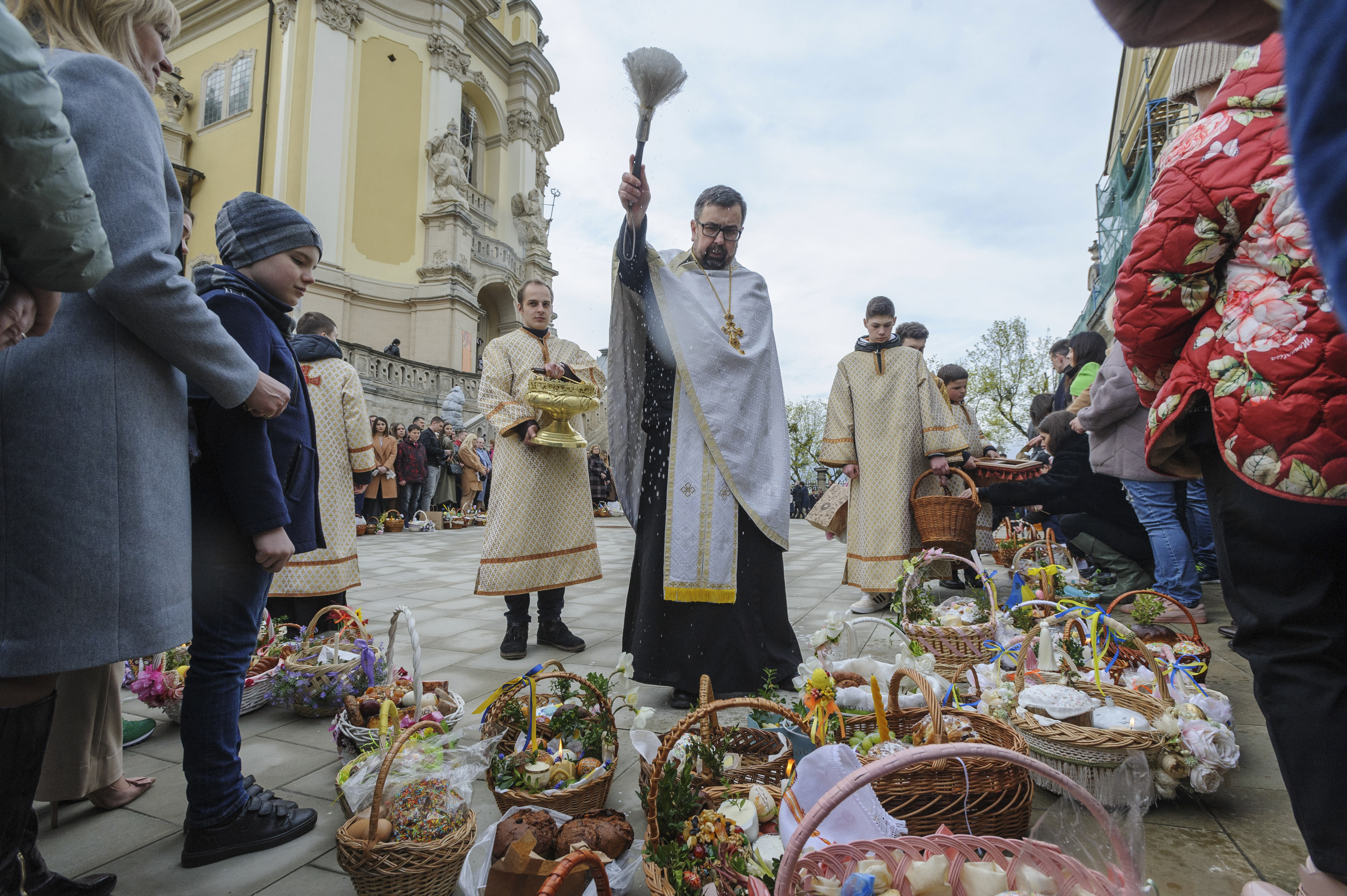 A Ukrainian priest blesses believers as they collect traditional cakes and painted eggs prepared for an Easter celebration in the in Lviv, Ukraine, Saturday, April 23, 2022. (AP Photo/Mykola Tys) 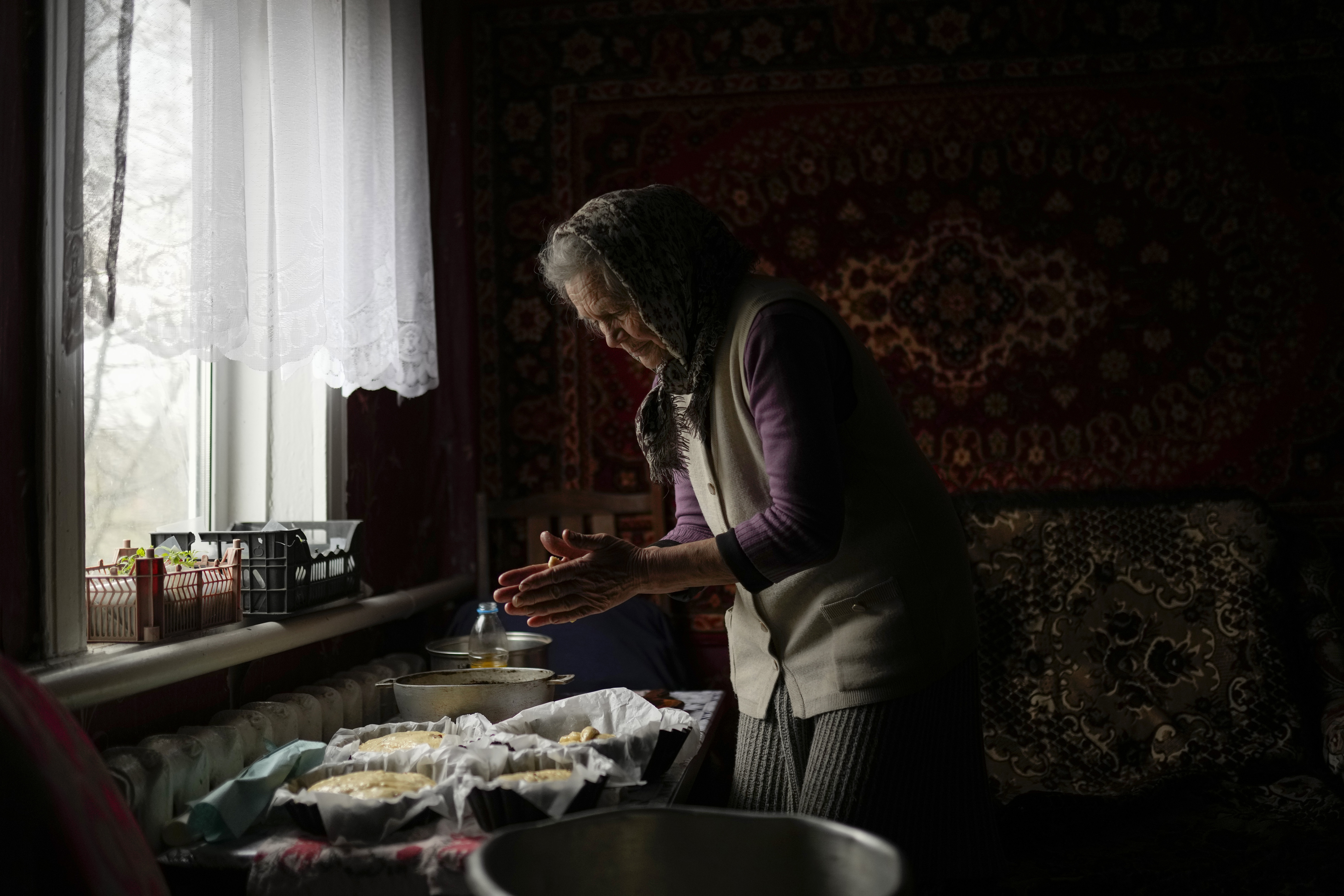 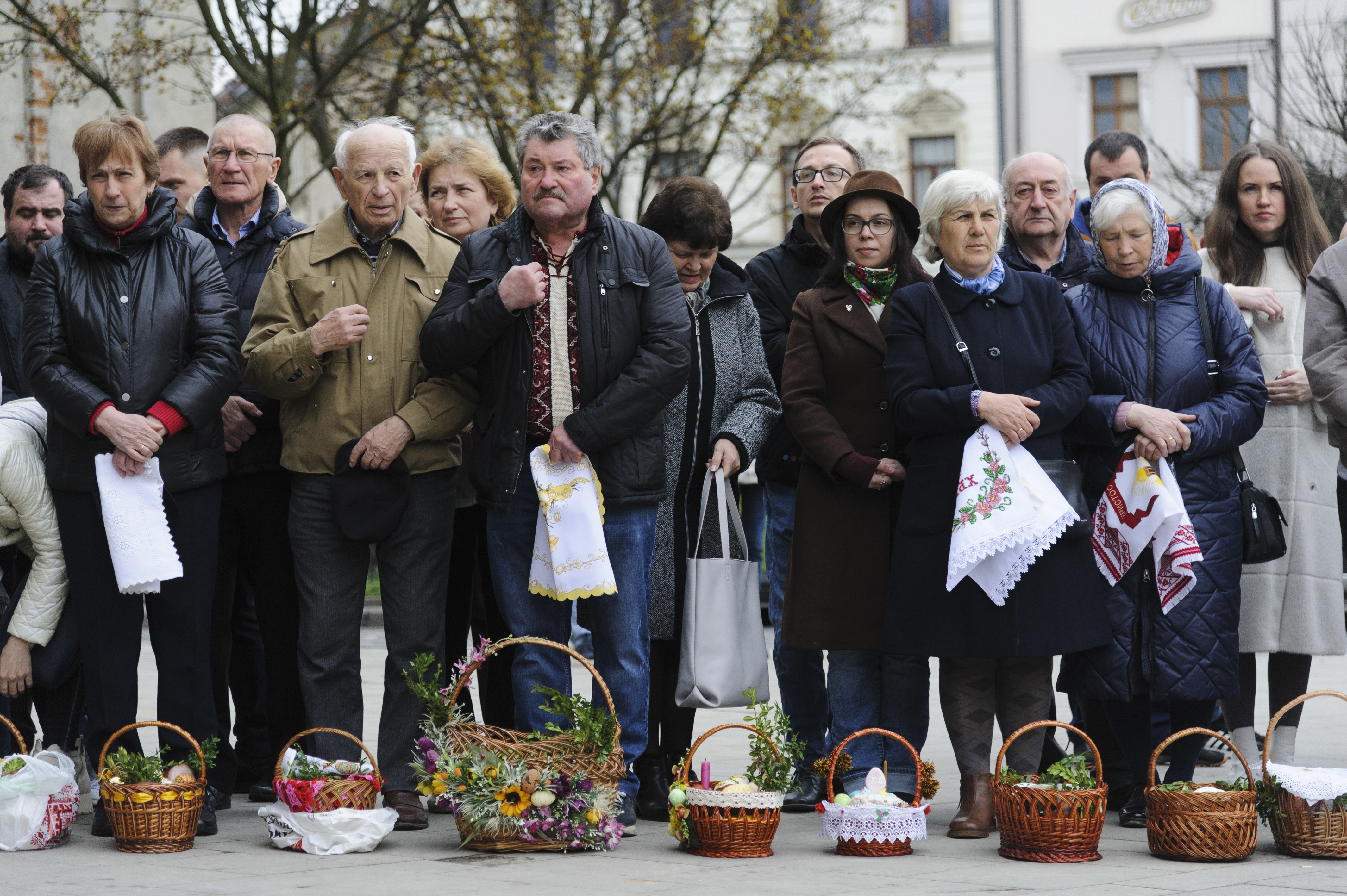 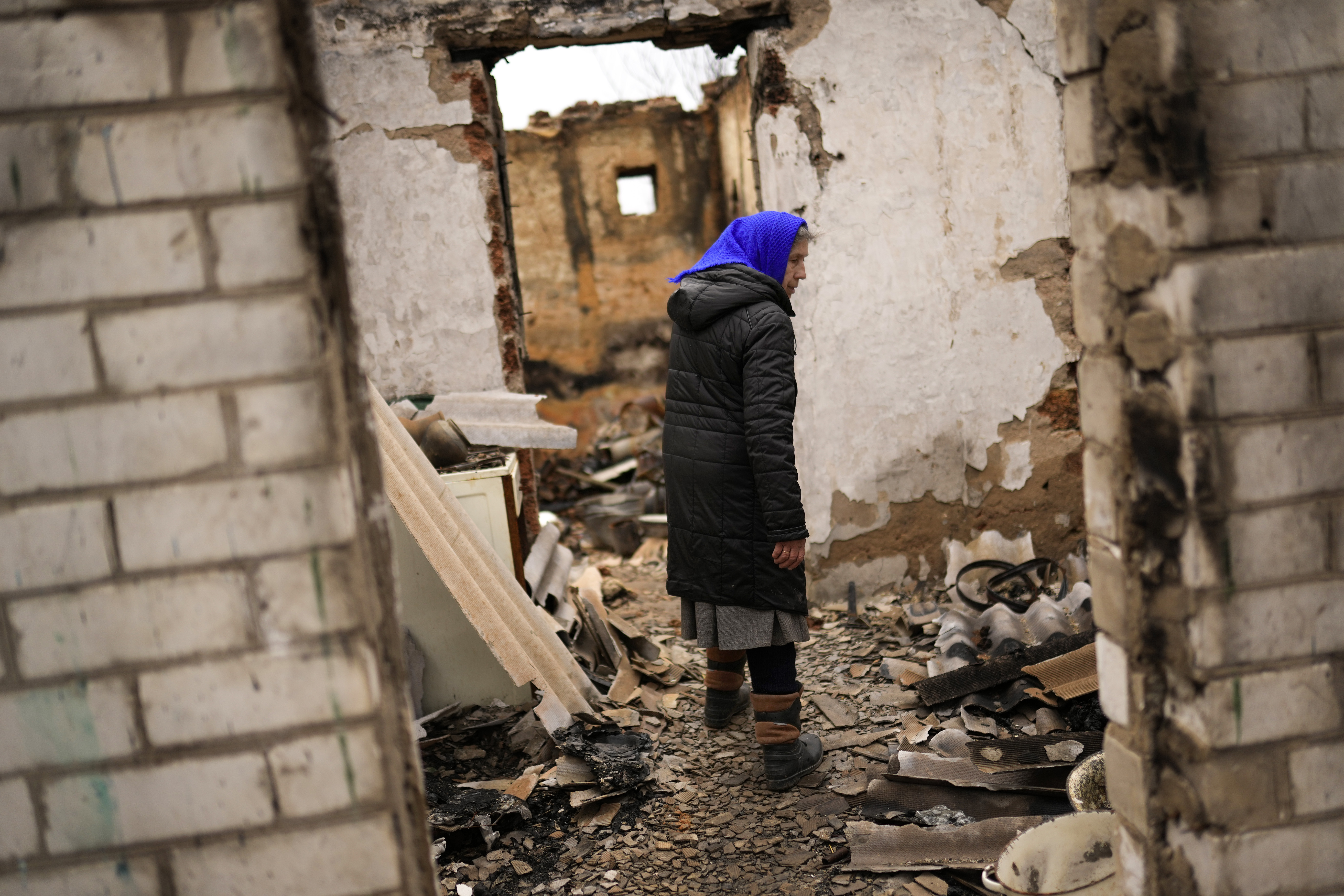 Valentyna Sherba, 68, enters her destroyed father's home in the aftermath of the battle between Russian and Ukrainian troops at the outskirts of Chernihiv, northern Ukraine, Saturday, April 23, 2022. (AP Photo/Francisco Seco) 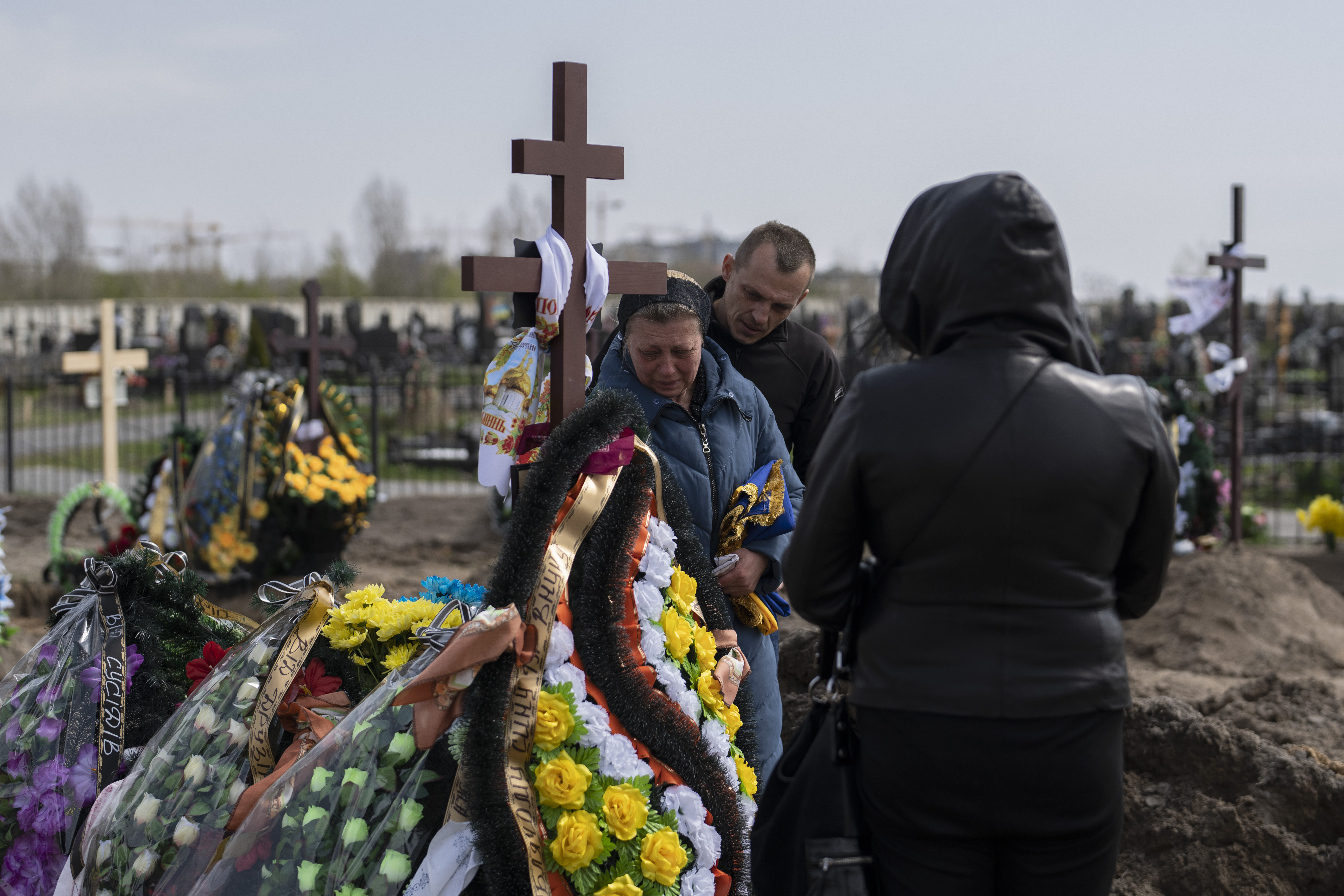 Irina Tromsa, left, mourns at the grave of her son Bogdan, 24, a Ukrainian paratrooper from the 95th Brigade killed during fighting against Russian troops in the north-east of the country, during his funeral at the cemetery in Bucha, in the outskirts of Kyiv, on Saturday, April 23, 2022. (AP Photo/Petros Giannakouris) 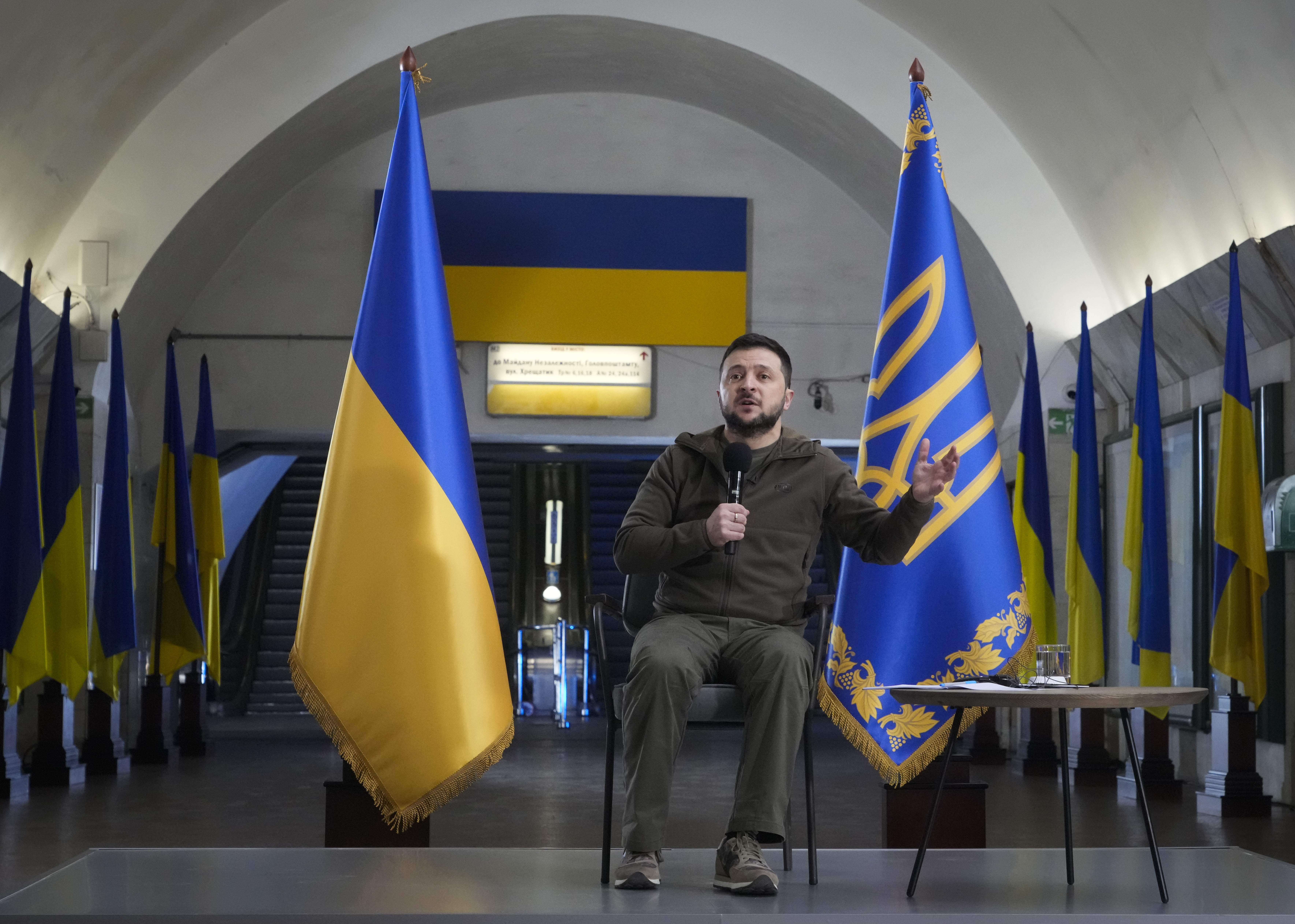 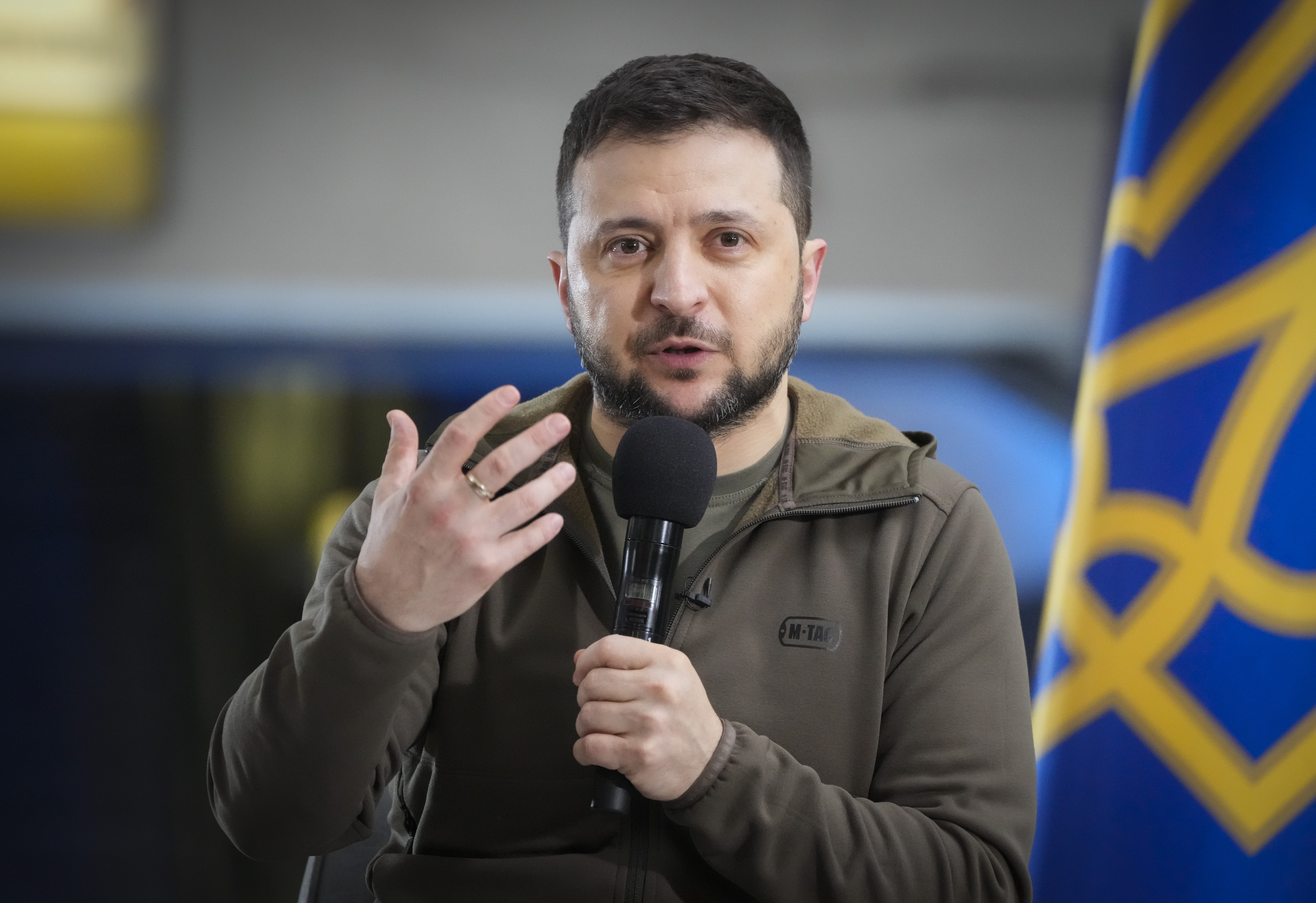