After redistricting in Arkansas Delta, 2 incumbents face off in GOP legislative primary 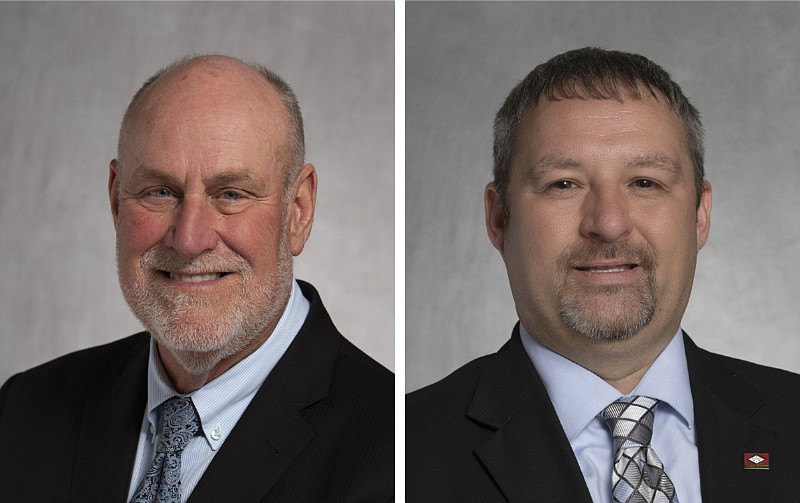 Arkansas state Reps. Mark McElroy (left) and David Tollett, both R-Ark., are both running to represent House District 62 after redistricting put them in the same district.

The Republican primary race for House District 62 pits two incumbent lawmakers against one another.

State representatives Mark McElroy and David Tollett are the two incumbent Republicans who will face off after the board of apportionment drew the men into the same district during the redistricting process after the 2020 census.

Unlike most House districts, the winner of the Republican primary in District 62 may have to face an uphill battle in the general election in November, as it is one of the few majority Black districts in the state. The new district stretches from Arkansas City to Brickeys, including parts of Lee, Phillips, Monroe and Desha counties.

McElroy, a 66-year-old four-term lawmaker from Tillar, said he thinks he has the best shot to keep District 62 red. McElroy said he loves to campaign around the large and rural Delta district on his bicycle, and thinks he has a unique way of connecting with voters.

McElroy is a former county judge for Desha County and a retired farmer who spends time as an auctioneer for charity auctions.

Tollett, 43, who teaches 7th- and 8th-grade geography at Stuttgart Jr. High, is running for his second term in the House. Tollett describes himself as a "common-sense conservative" who wants to push for more increases in teacher salaries and more investment in infrastructure.

Tollett, of Malvern, is the former superintendent of the Barton School District, but he stepped down to teach again, as being both a lawmaker and school administrator was too taxing, he said. Tollett also calls himself a "world traveler," saying he's been to 47 different countries.

Tollett and McElroy both said they support Medicaid Expansion in Arkansas, saying it provides necessary health care coverage to poor Arkansans in the Delta.

INVESTING IN THE DELTA

Tollett said a key to rebuilding lost jobs in the Delta is more investment in infrastructure. Roads and bridges in disrepair are hurting job creation in the area, he said.

Helena Harbor needs about $12 million in upgrades to the water, rail and broadband infrastructure, which would increase industry jobs in Helena-West Helena, Tollett said. Tollett said the fact that the harbor isn't up to industry standard has prevented companies from moving to the area.

"The Helena Harbor that sits on the Mississippi River can provide both railroad and [river port] delivery," Tollett said. "That port was built in the 1980s and has never been finished out."

Arkansas will receive $4 billion as part of the infrastructure bill Congress passed in November, which Tollett said should be directed to rebuilding roads, bridges and the Helena Harbor in the Delta.

"Bringing industry into the area is huge and we're not going to be able to do that on a large scale until the Helena Harbor is finished and hopefully the bridge is finished out," Tollett said.

Like Tollett, McElroy said the Delta needs more investment, particularly when it comes to roads, and especially when trucking plays a major role in the local economy.

McElroy said the state needs to invest in repairs to the Helena Bridge, especially after structural problems closed the Hernando DeSoto Bridge -- that connects Arkansas to Tennessee -- for months last summer. While the Hernando DeSoto Bridge was closed, the Helena Bridge became a popular alternative crossing over the Mississippi River for commuters and truckers alike.

Investment in the Delta also means more investment in vocational schools, McElroy said, adding there is a shortage in the number of people with commercial driver's licenses in the district.

"We got some [vocational] schools, but we're not turning out the drivers as fast as we need to," McElroy said.

McElroy said the key to getting the state to invest infrastructure funds in the Delta would be through being able to lobby the governor to appoint Arkansans from the Delta to the Arkansas Highway Commission. Robert S. Moore Jr., of Arkansas City, who chairs the five-member commission, will have his 10-year term expire in January.

Both candidates said they support gradually doing away with the state's income tax. Eliminating Arkansas' income tax has become a popular position for many Republicans in the state to take, but to do so could be tricky as the revenue could be difficult to replace.

Tollett also said the state income tax should be eliminated "in phases and steps" that will be tied to "economic indicators." As lower taxes lure more jobs to Arkansas, the state can gradually cut the income tax, Tollett said.

"So basically as we are bringing in industry and creating new jobs and new sources of revenue from that industry we can utilize those new funding streams to be able to cut back on people's state income tax and eventually eliminate it," Tollett said.

As a teacher, Tollett said he is making increasing teacher pay a top priority in his campaign. He said The state should raise educators' salaries by $2,000 per year until teachers reach a $46,000 base minimum salary.

Tollett said teachers' pay can be increased by cutting from other parts of the state's education budget through a combination of untying school funding to enrollment and re-appropriating state money from wealthier school districts to poorer ones.

Tollett is also an opponent of school vouchers, saying the state shouldn't be funding voucher programs while public schools in Arkansas are in dire need of investment.

"I cannot support vouchers until public schools are funded adequately -- equitably and adequately."

McElroy said he supports some voucher programs but believes there are issues with the programs, as some private schools don't like accepting public dollars because it often comes with strings attached.

McElroy said he does support school choice "because I want the kids in the Delta to get the best education wherever that might be."

CORRECTION: The winner of the May 24 Republican primary for House District 62 will face the winner of the Democratic primary between Kellee Mitchell Farris and Dexter R. Miller. A previous version of this story omitted Miller's name.