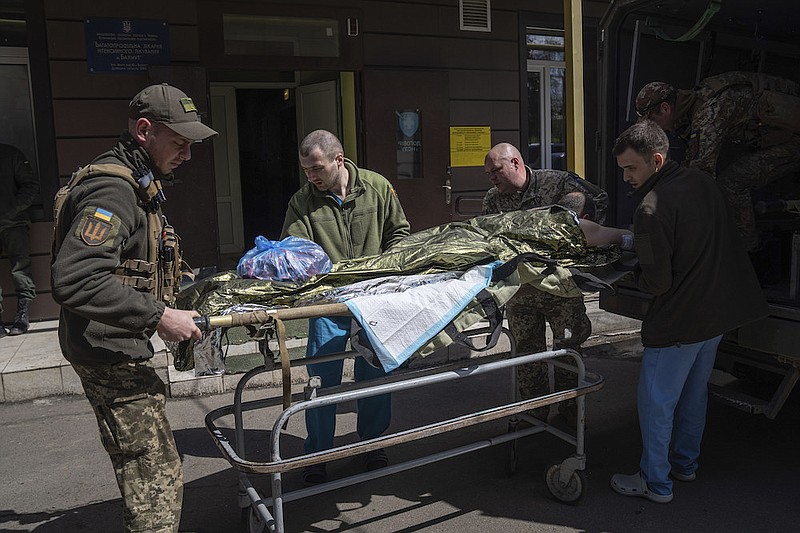 KYIV, Ukraine -- The United States announced new military assistance for Ukraine and a renewed diplomatic push in the war-ravaged nation as President Joe Biden's secretary of state and Pentagon chief completed a secrecy-shrouded trip to Kyiv.

In the highest-level American visit to the capital since Russia invaded in late February, top envoy Antony Blinken and Defense Secretary Lloyd Austin told Ukraine's president, Volodomyr Zelenskyy, and his advisers that the U.S. would provide more than $300 million in foreign military financing and had approved a $165 million sale of ammunition.

They also said Biden would soon announce his nominee to be ambassador to Ukraine and that American diplomats who left Ukraine before the war would start returning to the country this coming week. The U.S. Embassy in Kyiv will remain closed for the moment.

Zelenskyy had announced Saturday that he would meet with the U.S. officials in Kyiv on Sunday, but the Biden administration refused to confirm that and declined to discuss details of a possible visit even though planning had been underway for more than a week.

Zelenskyy's last face-to-face meeting with a top U.S. official was Feb. 19 in Munich with Vice President Kamala Harris, five days before Russia's invasion. While the West has funneled military equipment to Ukraine, Zelenskyy has stressed repeatedly that his country needs more heavy weapons, including long-range air defense systems and warplanes.

Austin and Blinken announced a total of $713 million in foreign military financing for Ukraine and 15 allied and partner countries; some $322 million is earmarked for Kyiv. The remainder will be split among NATO members and other nations that have provided Ukraine with critical military supplies since the war with Russia began, officials said.

Such financing is different from previous U.S. military assistance for Ukraine. It is not a donation of drawn-down defense stockpiles, but rather cash that countries can use to purchase supplies.

The new money, along with the sale of $165 million in ammunition, brings the total amount of U.S. military assistance to Ukraine to $3.7 billion since the invasion, officials said.

On the diplomatic front, Blinken told Zelenskyy that Biden will announce his nomination of veteran diplomat Bridget Brink to be the next U.S. ambassador to Ukraine. Brink has served since 2019 as ambassador to Slovakia. She previously held assignments in Serbia, Cyprus, Georgia and Uzbekistan as well as with the White House National Security Council. The post requirements confirmation by the U.S. Senate.

Since failing to capture Kyiv, the Russians have aimed to gain full control over the eastern industrial heartland, the Donbas, where Moscow-backed separatists controlled some territory before the war.

Russian forces launched fresh airstrikes on a Mariupol steel plant where an estimated 1,000 civilians are sheltering along with about 2,000 Ukrainian fighters. The Azovstal steel mill where the defenders are holed up is the last corner of resistance in the city, otherwise occupied by the Russians.

Zelenskyy said he stressed the need to evacuate civilians from Mariupol, including from the steel plant, in a Sunday call with Turkish President Recep Tayyip Erdogan, who is scheduled to speak later with Russian leader Vladimir Putin.

Ukrainian presidential adviser Oleksiy Arestovych said Ukraine has proposed holding talks with Russia next to the steel mill. Arestovych said on the Telegram messaging app that Russia has not responded to the proposal that would include establishing humanitarian corridors and the exchange of Russian war prisoners for the fighters still in the plant.

U.N. Secretary-General Antonio Guterres is scheduled to travel to Turkey today and then Moscow and Kyiv. Zelenskyy said it was a mistake for Guterres to visit Russia before Ukraine.

"Why? To hand over signals from Russia? What should we look for?" Zelenskyy said Saturday. "There are no corpses scattered on the Kutuzovsky Prospect," he said, referring to one of Moscow's main avenues.

Mariupol has endured fierce fighting since the start of the war because of its location on the Sea of Azov. Its capture would deprive Ukraine of a vital port, free up Russian troops to fight elsewhere, and allow Moscow to establish a land corridor to the Crimean Peninsula, which it seized from Ukraine in 2014.

More than 100,000 people -- down from a prewar population of about 430,000 -- are believed to remain in Mariupol with scant food, water or heat. Ukrainian authorities estimate over 20,000 civilians have been killed. Recent satellite images showed what appeared to be mass graves to the west and east of Mariupol.

Children in an underground bunker were seen receiving Easter presents in a video released Sunday by the far-right Azov Battalion, which is among the Ukrainian forces at the steel plant in Mariupol. The group's deputy commander, Sviatoslav Palamar, said the video was shot at the plant.

One toddler is seen wearing homemade diapers made of cellophane and people are seen hanging laundry on makeshift hangers.

"Please help us," one woman in the video said through tears, appealing to world leaders. "We want to live in our city, in our country. We are tired of these bombings, constant air strikes on our land. How much longer will this continue?"

Mykhailo Podolyak, another presidential adviser, tweeted that the Russian military was attacking the plant with heavy bombs and artillery while accumulating forces and equipment for a direct assault.

Zelenskyy on Saturday accused Russians of committing war crimes by killing civilians and of setting up "filtration camps" near Mariupol for people trying to leave the city. He said the Ukrainians -- many of them children -- are then sent to areas under Russian occupation or to Russia itself, often as far as Siberia or the Far East.

The claims could not be independently verified. But they were repeated by Ukrainian lawmaker Yevheniya Kravchuk on ABC's "This Week."

"They have pulled these people from Mariupol -- they are put to filtration camps ... it's sort of something that can't be happening in the 21st century," Kravchuk said.

Zelenskyy also claimed that intercepted communications recorded Russian troops discussing "how they conceal the traces of their crimes" in Mariupol.

And he highlighted the death of a 3-month old girl in a Russian missile strike Saturday on the Black Sea port of Odesa. The baby was among eight people killed when Russia fired cruise missiles at Odesa, Ukrainian officials said.

"The war started when this baby was 1 month old," Zelenskyy said. "Can you imagine what is happening? They are filthy scum; there are no other words for it."

Russia's Defense Ministry said the Sarmat was test-fired for the first time Wednesday from the Plesetsk launch facility in northern Russia and its practice warheads have successfully reached mock targets on the Kura firing range on the far eastern Kamchatka Peninsula.

The test launch underlines the Kremlin's emphasis on the country's nuclear forces.

Putin hailed the Sarmat launch as a major achievement, claiming that the new missile has no foreign equivalent and is capable of penetrating any prospective missile defense.

"This really unique weapon will strengthen the combat potential of our armed forces, reliably ensure Russia's security from external threats and make those, who in the heat of frantic aggressive rhetoric try to threaten our country, think twice," Putin said Wednesday.

The Sarmat is a heavy missile that has been under development for several years to replace the Soviet-made Voyevoda, which was code-named Satan by the West and forms the core of Russia's nuclear deterrent.

The military has said that the Avangard is capable of flying 27 times faster than the speed of sound and making sharp maneuvers on its way to target to dodge the enemy's missile shield.

In anticipation of the deployment of the Sarmat, the new hypersonic vehicle has been fitted to the existing Soviet-built ICBMs, and the first unit armed with the Avangard entered duty in December 2019.

The director and the designer-in-chief of the Makeyev missile-maker that developed the Sarmat, Vladimir Degtyar, said in televised remarks that its range allows it to fly along any trajectory across north or south poles to hit any target around the world.

Turkey closed its airspace to Russian jets flying to Syria, a shift in policy aimed at increasing the cost of the war in Ukraine for Putin.

Turkey barred the Russian aircraft, including any civilian flights carrying troops, from its skies for the first time since Russia intervened in Syria's civil war in 2015 in support of President Bashar Assad.

The move adds to external pressure on Moscow to end the conflict in Ukraine. President Recep Tayyip Erdogan told Putin of his decision in a phone call, Foreign Minister Mevlut Cavusoglu was cited as saying by state broadcaster TRT. He didn't specify when the call took place.

Most Russian flights to Syria pass though Turkish airspace, though the number of troops ferried to the country isn't publicly disclosed.

The restrictions are unlikely to halt the movement of soldiers and weapons to Syria from Russia, according to a Turkish official familiar with the matter, who said Moscow will likely now divert flights across Iranian airspace.

The key goal rather was to show solidarity with fellow NATO members, many of whom are sending weapons into Ukraine to help support the fight against Russia, the official said. Turkey has already limited access through the Bosporus strait for Russian naval vessels.

Turkey and Russia are in opposing camps in conflicts from Syria to North Africa to the Caucasus, often backing sides at war with each other.

In Syria, the two countries are locked in a dispute. Thousands of Turkish soldiers are deployed around the rebel-held Idlib province, vulnerable to attacks by government forces backed by Russia.

At the same time, tensions between Turkey and the U.S. have risen over Erdogan's decision to buy air defense missiles from Russia. Russian tourists make up the bulk of foreign visitors, bringing in much needed hard currency to Turkey's economy, while Russian companies are building Turkey's only nuclear power plant.

And the Turkish government has refrained from joining sanctions for fear of retribution. Russia meets around half of Turkey's demand for natural gas, giving it huge leverage over the government in Ankara. 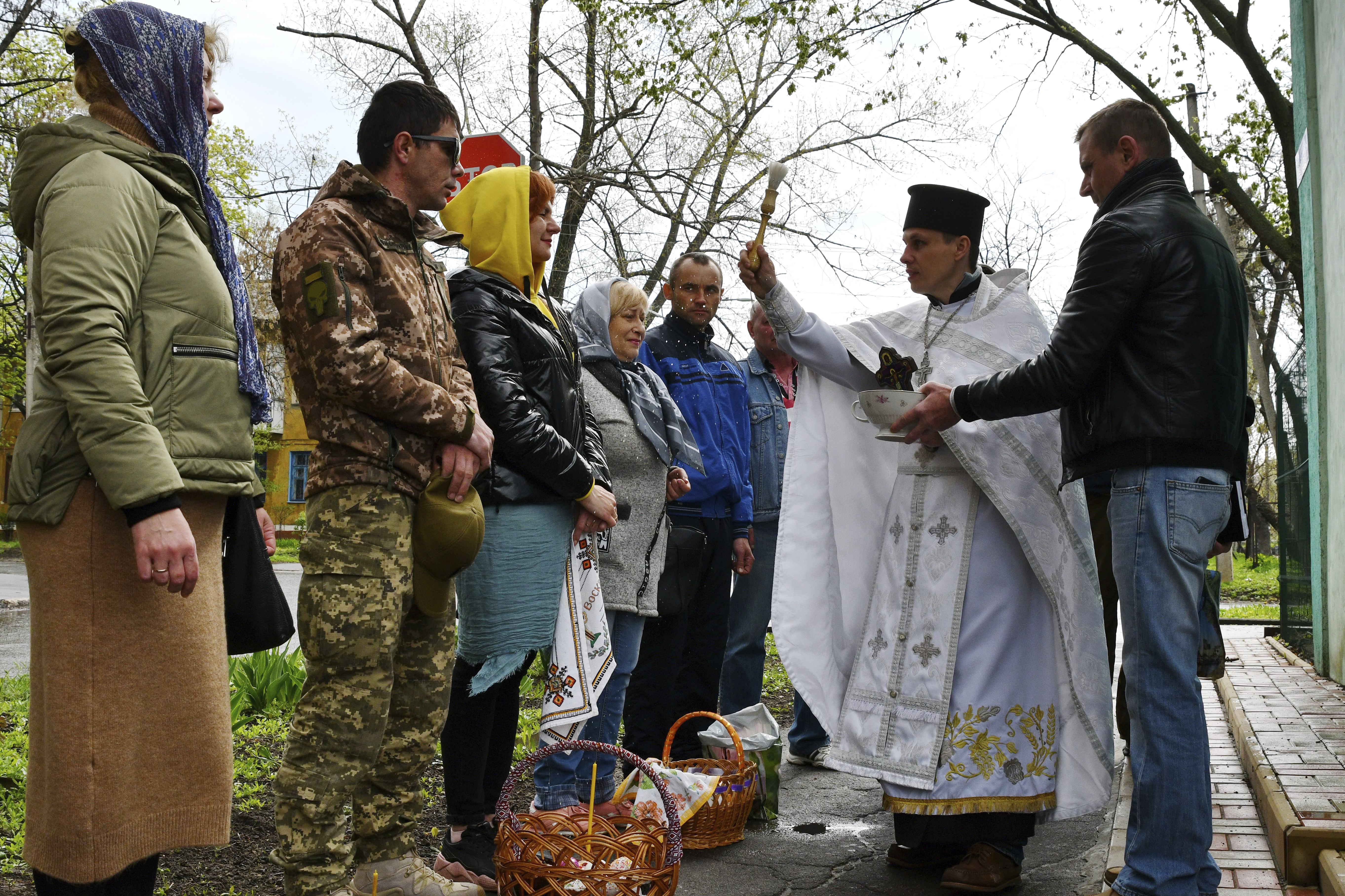 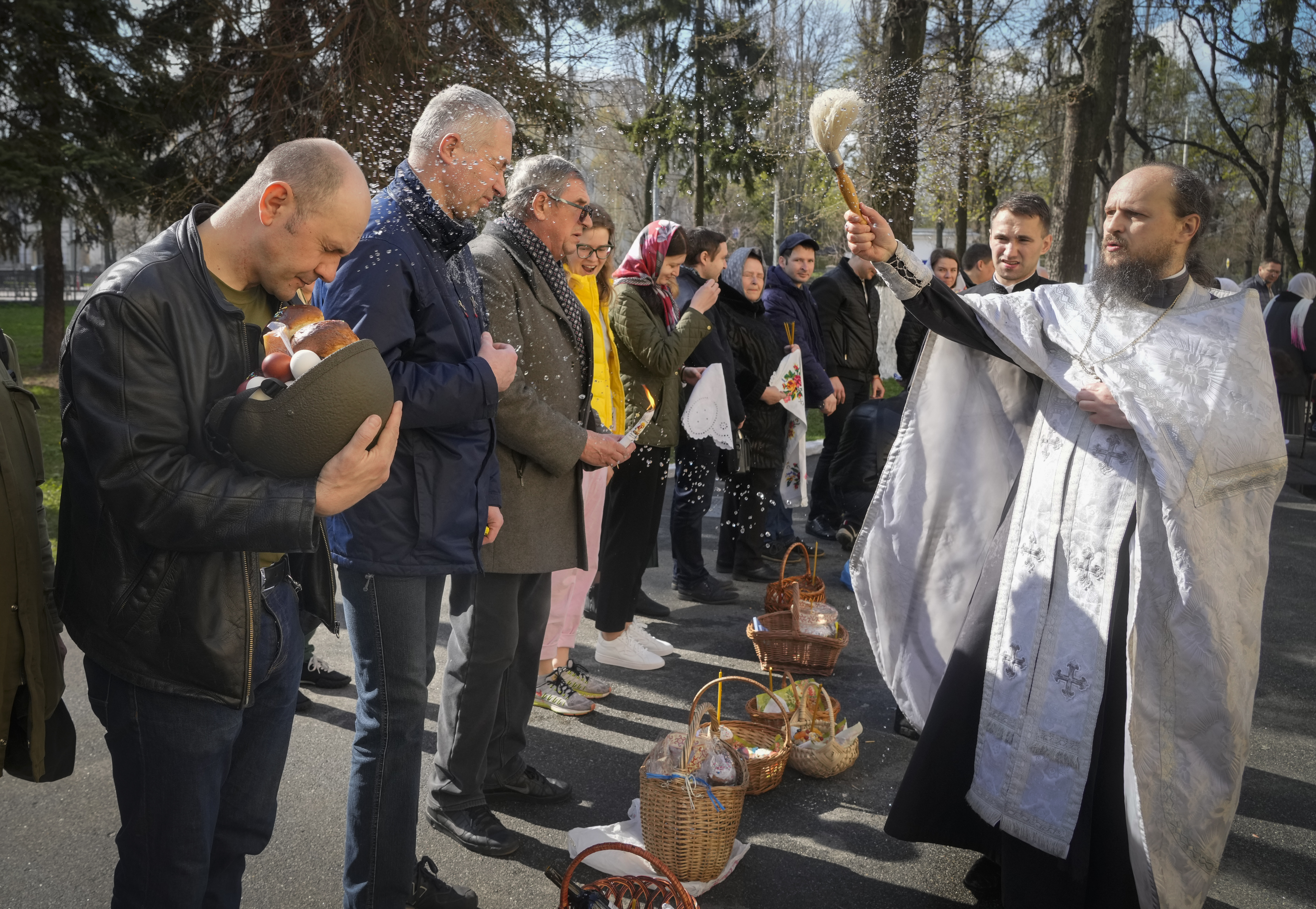 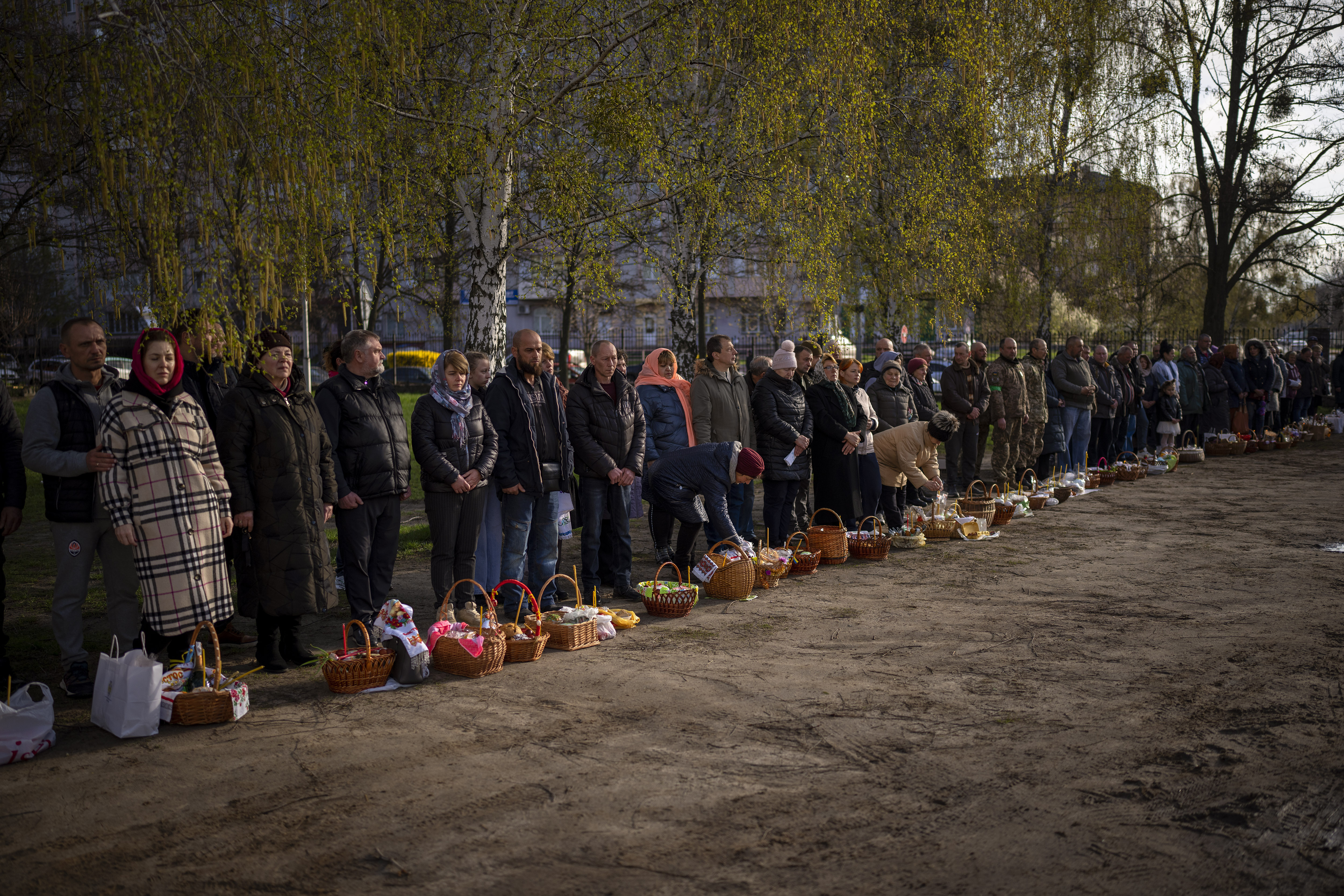 Worshipers stand next to their traditional cakes and painted eggs prepared for an Easter celebration during a religious service at a church in Bucha, on the outskirts of Kyiv, on Sunday, April 24, 2022. (AP Photo/Emilio Morenatti) 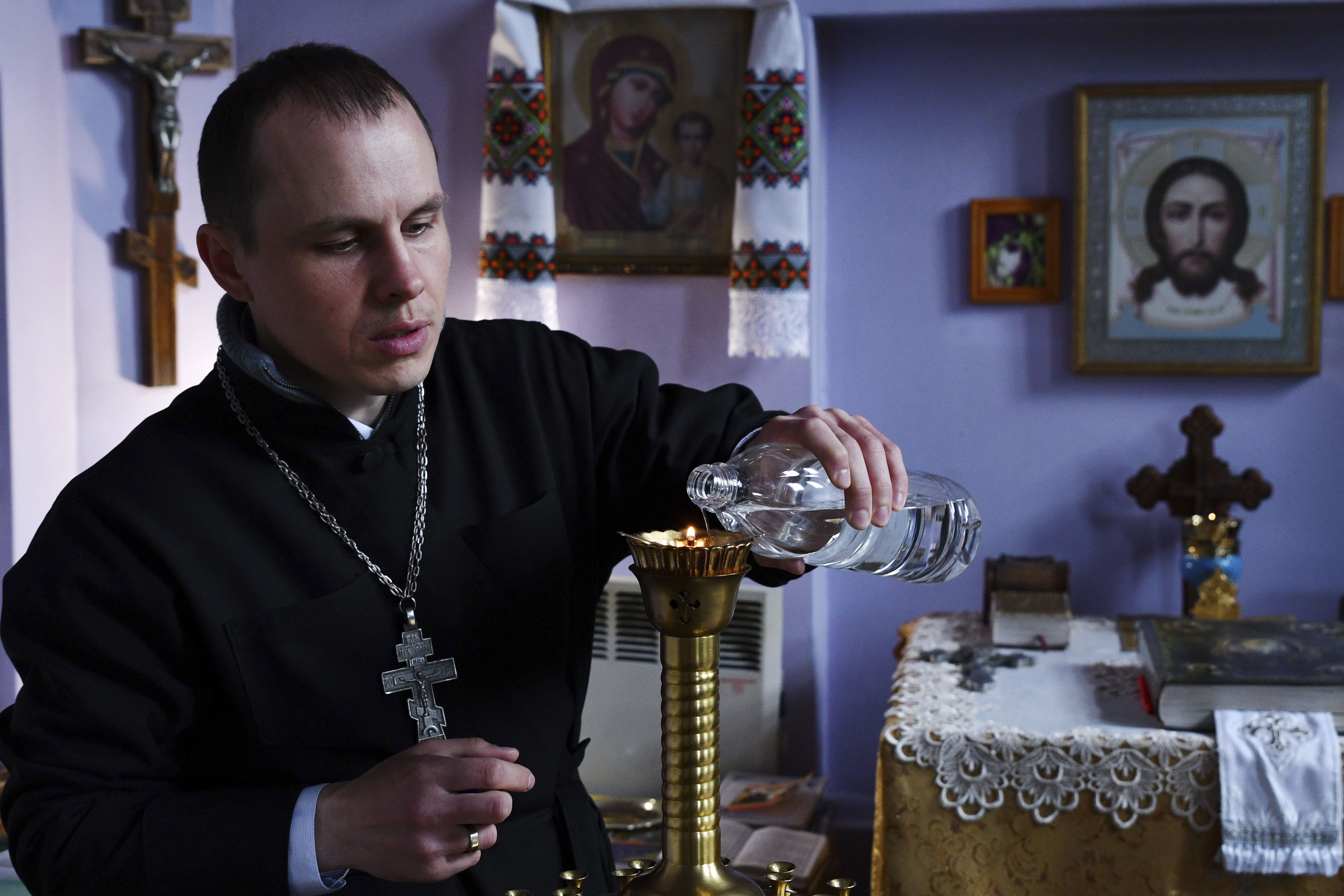 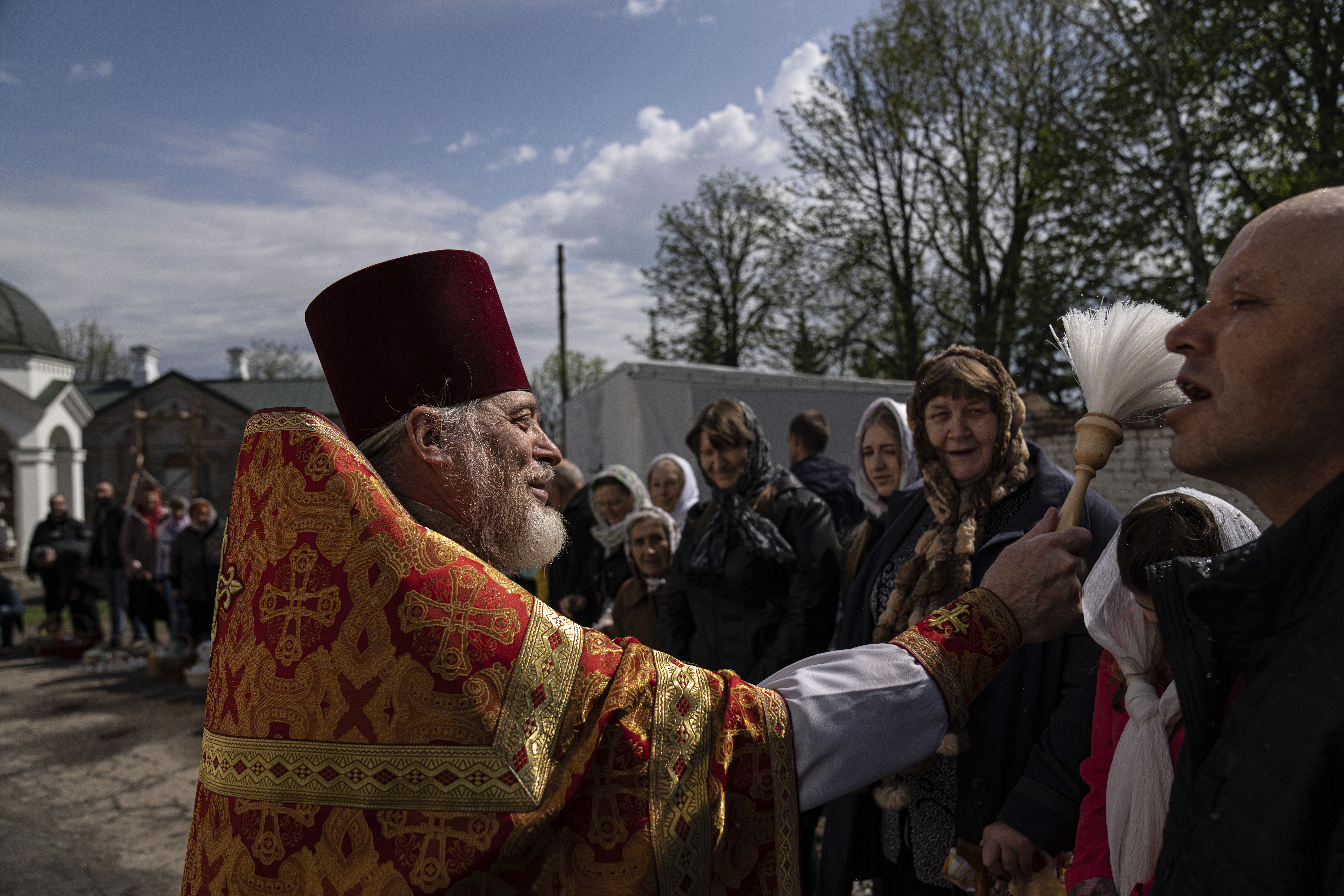 An Orthodox priest blesses believers during the Easter celebration at the All Saints church in Bahmut, eastern Ukraine, Sunday, April 24, 2022. (AP Photo/Evgeniy Maloletka) 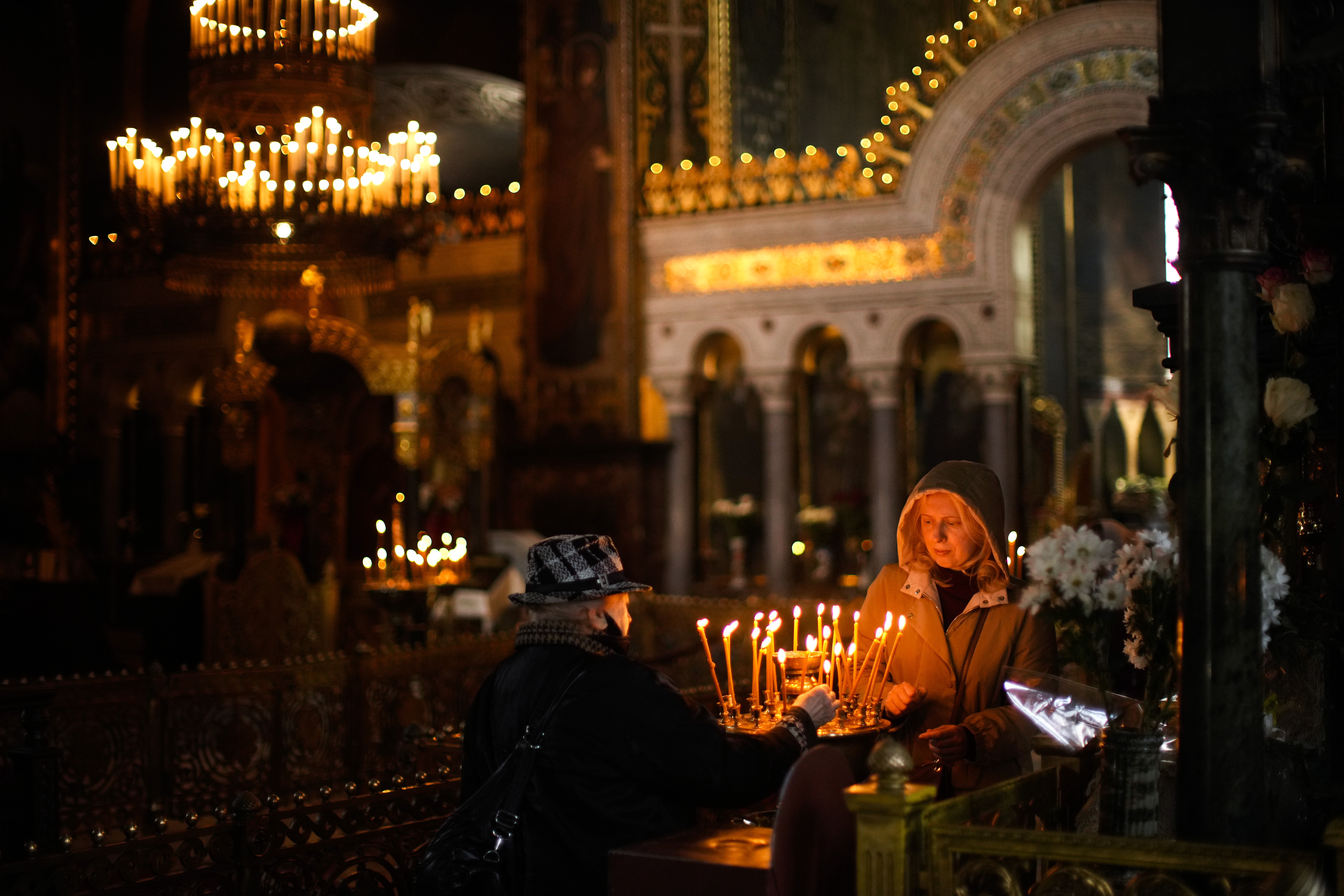 Worshippers light candles at the Saint Volodymyr's Cathedral during Orthodox Eastern celebrations in Kyiv, Ukraine, Sunday, April 24, 2022. The sun came out as Ukrainians marked Orthodox Easter in the capital, Kyiv, on Sunday with prayers for those fighting on the front lines and others trapped beyond them in places like Mariupol. (AP Photo/Francisco Seco) 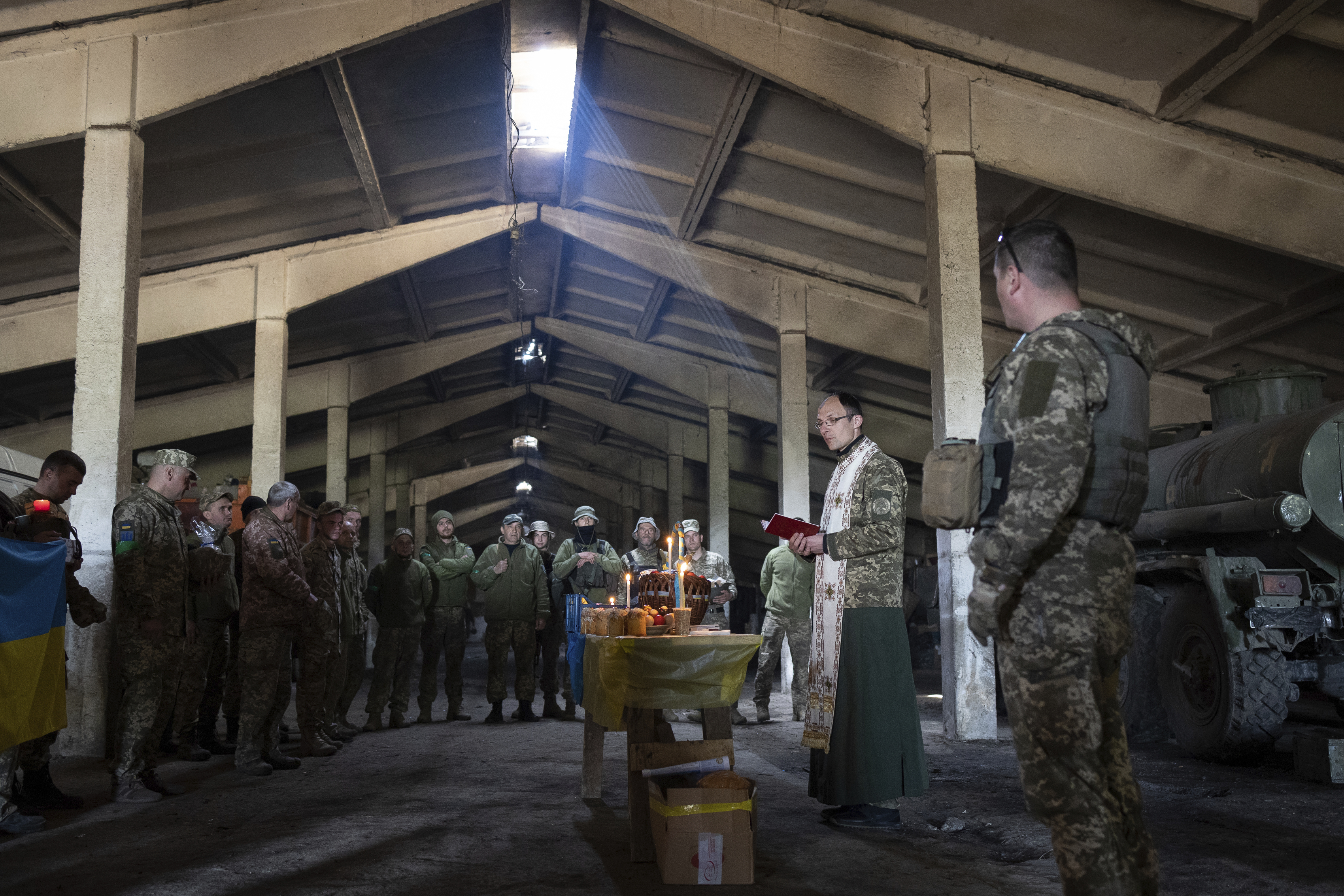 A military Orthodox priest leads a service during the Easter celebration at the frontline position of 128 brigade of Ukrainian army near Zaporizhzhia, Ukraine, Sunday, April 24, 2022. (AP Photo/Andriy Dubchak) 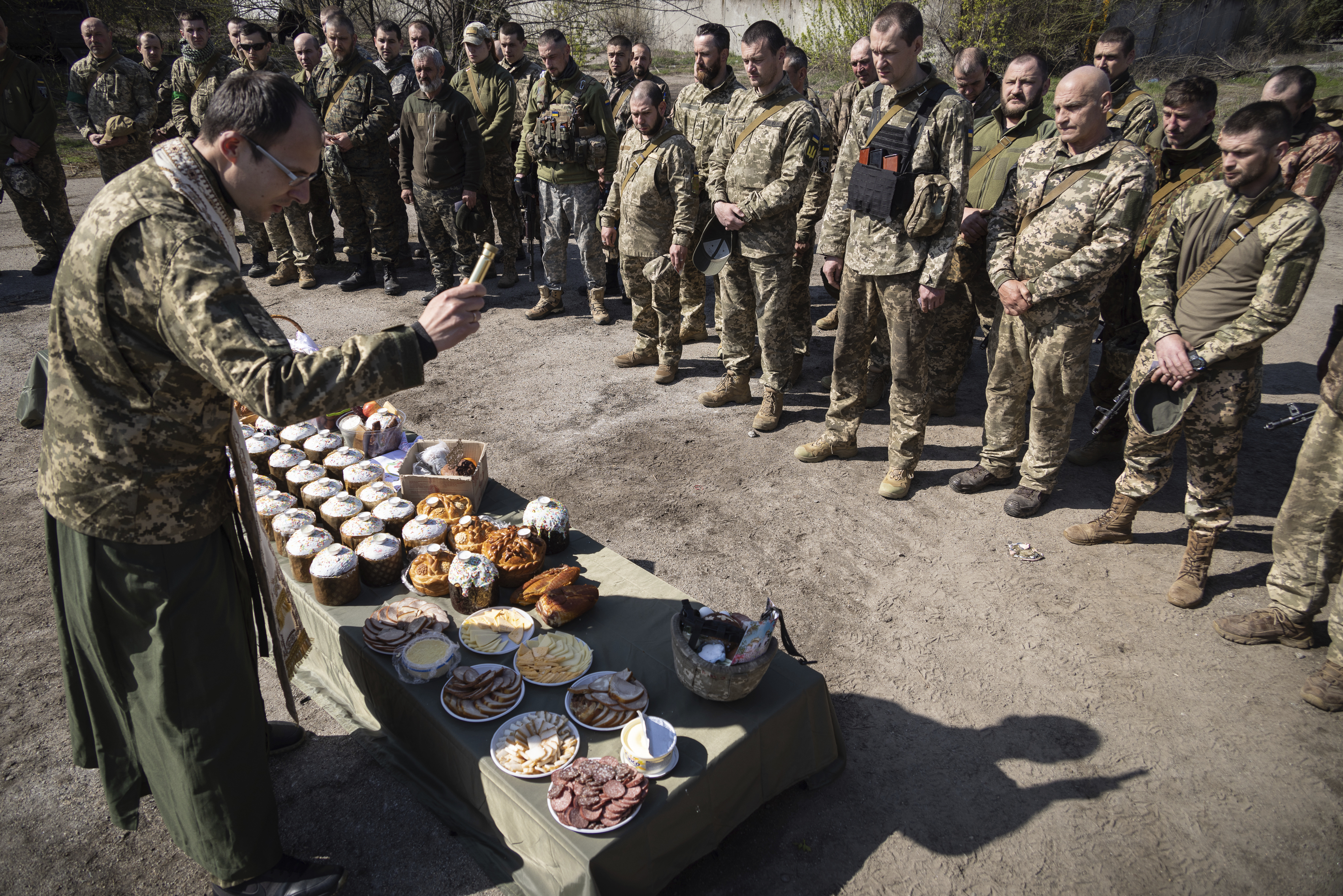