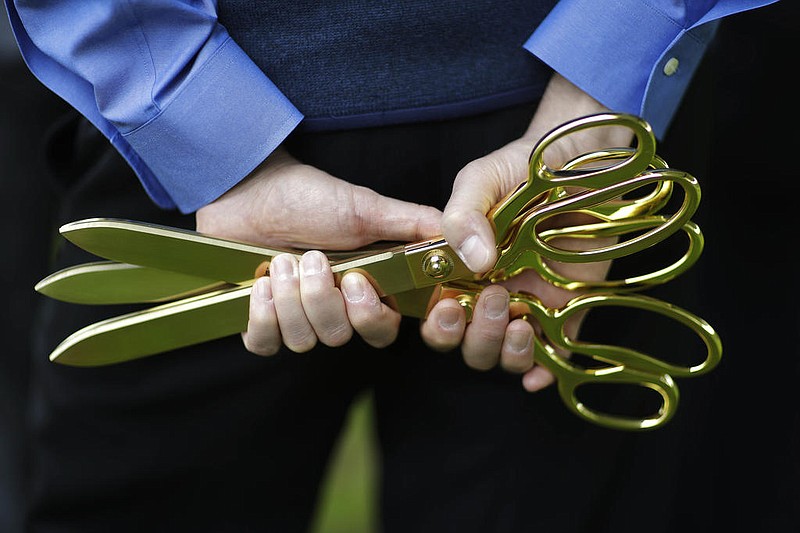 Scissors for a ribbon-cutting ceremony are shown in this Feb. 8, 2017 file photo. (AP/David Goldman)

Aundrea Clayborn of Little Rock was entering the ninth grade when she joined the first summer youth program at Brandon House Cultural and Performing Arts Center.

Now 19, Clayborn is a high school graduate and a choreographer for Brandon House's two dance teams, and she looks forward to making use of the organization's new dance studio.

The nonprofit arts-based community center, founded in 2013 by the Bax family, is expanding its presence in Little Rock into a suite on Colonel Glenn Road on the west side of town. The 16,000-square-foot new location will house an art gallery and lab, production studio and multipurpose event center in addition to the dance studio, Executive Director Pamela Bax said.

Clayborn said the new space will "bring so much" to the organization and the young dancers she works with.

"It's going to be so good for us to have our own space to express ourselves in dancing, and to give the kids their own little space so they can show their imagination and creation through dance," Clayborn said.

Brandon House will hold a ribbon-cutting ceremony on the evening of May 5 to celebrate the addition of the new facilities.

The nonprofit's goal is "to increase the educational equity and talent development pipeline for high-risk youth in the state that haven't been given adequate access to artistic, vocational, or academic programming; and to support the creative talents of low-wealth artists, musicians, and creative professionals," according to the news release from earlier this month announcing the ribbon-cutting.

The youths who participate in Brandon House programs often have opportunities to put their new skills to use with businesses that enlist their help, Bax said.

Brandon House's first location is at the intersection of West 12th Street and South University Avenue, the former home of the furniture store of the same name that closed in 2004, Bax said.

"We would often drive by the furniture store [building] and dream about a large performing arts center in that building," she said.

Bax's husband, Paul, is the nonprofit's financial director. Their daughter, Patrice, is the director of programs, and their son, Dion, is the production manager.

The new space's production studio will include a photography lab and a recording studio, and the event center will be available for anyone to book conferences, meetings or social gatherings, Bax said.

The art gallery, funded by the Wingate Foundation, is meant to highlight the work of local artists "in our own backyard," she said.

"What we're looking at with our art gallery is really showcasing the work of individuals who don't get an opportunity to be exposed through larger art galleries," Bax said.

Brandon House's IHUSTLE program, short for I Have Unique Skills To Learn and Earn, will benefit from the new space, Bax said. IHUSTLE is a violence prevention program that introduces young people to a variety of creative endeavors, such as graphic design, music production, photography, filmmaking and podcasting.

Clayborn participated in IHUSTLE during her high school years, dancing in a music video that other young people produced, she said.

Allan Boston, 22, developed his love of photography and videography due to IHUSTLE when he was a student at the now-closed McClellan Magnet High School in Geyer Springs. He had just moved to Little Rock from West Memphis in 2017, he said, and needed to stay busy after school.

Boston proved his talent to Brandon House leaders by filming a live music event, he said.

"They threw me in the water, but they held my hand," Boston said. "They put a camera in my hand and said, 'We need all this to be filmed, show me what you've got.'"

He now works full-time as Brandon House's photographer and videographer, and he said he is deeply grateful for the opportunities the organization has given him.

"Brandon House is open to anyone," he said. "Everybody loves everybody there, we're a family, [and] we don't leave anybody behind or forget about anyone."

The new facilities have led to more people and businesses requesting creative services from Brandon House, Boston said, as well as giving him a space to work on his audiovisual portfolio.

The facilities also give the young people in Brandon House programs more space to work on their budding creative skills, Boston said.

Though the new location has been in use for weeks, Boston said he is looking forward to the ribbon-cutting in May.

"I'm going to feel some type of way because I've seen the groundwork," he said. "I may not have been there from day one, but I pretty much got my day one with them. It's a blessing to be able to see where we were and where we are now."