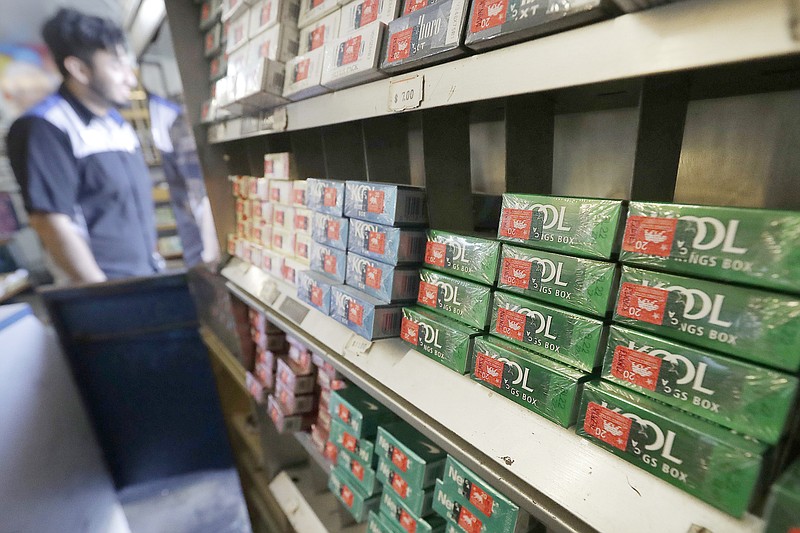 FILE - This May 17, 2018 file photo shows packs of menthol cigarettes and other tobacco products at a store in San Francisco. As federal officials finalize a long-awaited plan to ban menthol cigarettes, dozens of interest groups have met with White House staffers to try and influence the process, which has the potential to save thousands of lives while wiping out billions in tobacco sales. (AP Photo/Jeff Chiu, File)

WASHINGTON -- As federal officials finalize a long-awaited plan to ban menthol cigarettes, dozens of interest groups have met with White House staffers to try to influence the process, which has the potential to save hundreds of thousands of lives while wiping out billions in tobacco sales.

The White House concluded its review of the Food and Drug Administration's proposal Thursday after nearly 40 virtual meetings with outside groups, according to a government website. The FDA has pledged to lay out a detailed proposal for phasing out the flavor by month's end, meaning an official announcement could come next week.

Meeting materials posted online show that nearly all the groups opposing the ban have financial ties to tobacco companies, including businesses that sell cigarettes and nonprofit groups that receive charitable contributions.

Menthol is the only cigarette flavor that wasn't banned under the 2009 law that gave the FDA authority over tobacco products. Several efforts to eliminate menthol since then have been derailed by industry pushback or competing political priorities.

Menthol's persistence concerns health advocates because the ingredient's cooling effect has been shown to make it easier to start smoking and harder to quit. The health consequences have disproportionately fallen on Black smokers, 85% of whom use menthols.

FDA officials estimate that a ban could prevent 630,000 smoking deaths over 40 years, more than a third among Black people.

Anti-tobacco groups are tracking the review by the White House's budget arm, after watching earlier FDA tobacco proposals get shelved or diluted under prior administrations.

"The concern with this process is that, in the past, political considerations have overtaken the scientific analysis of the FDA," said Matthew Myers of the Campaign for Tobacco-Free Kids. "But I'm optimistic that the rule will come out in substantially the same form as the agency proposed it."

The White House Office of Management and Budget reviews all major federal regulations before publication, particularly those that could impact the economy. Outside groups and individuals can request a meeting, offering a last chance to try and shape the final product.

More than half the budget office's meetings on the menthol issue were requested by groups that traditionally oppose tobacco restrictions. Memos and follow-up correspondence revealed familiar arguments about unintended consequences of a ban, including that it would subject Black communities to additional policing due to contraband cigarettes.

The Rev. Al Sharpton warned officials that the FDA's plan would "exacerbate existing, simmering issues around racial profiling, discrimination and policing," according to a letter sent after his April 13 meeting, which included Susan Rice, President Joe Biden's top domestic adviser on racial inequality.

The National Action Network did not respond to requests for comment.

Health advocates dismiss the over-policing concerns because the FDA's proposal would apply to companies that make or sell menthol cigarettes, not individual smokers.

"This is about stopping the production, distribution and sales of these things," said Dr. Phillip Gardiner of the African American Tobacco Control Leadership Council. "It has nothing to do with possession."

On Wednesday, the NAACP urged the Biden administration to move ahead with the menthol ban, saying that failing to do so "would be discriminatory and counter the goal and function of the FDA."

More than a fourth of the meetings were requested by gas stations, convenience stores and distributors. Members of the Southern Association of Wholesale Distributors said some convenience stores could lose 30% of their cigarette revenue, forcing them to close and "creating food deserts."

Other groups, including Americans for Tax Reform, warned of lost government revenue, citing one estimate that federal and state budgets would lose $6.6 billion in cigarette sales taxes. That group, led by conservative activist Grover Norquist, has received funding from Altria, the nation's largest cigarette maker.

Another argument from tobacco-aligned groups is that outlawing menthol would create an illicit market and increase criminal activities.

But Gardiner and other advocates point out that most cigarette smuggling in the U.S. today is across state lines to take advantage of differences in tax rates. If menthol production stops altogether there will be little supply to smuggle: Canada, for one, banned menthol in 2018.

More than 100 U.S. cities and counties have already restricted menthol products, with few indications of a burgeoning illicit market.

"The idea that somehow there's hundreds of millions of dollars of menthol cigarettes that can be shipped around the world and across our border has not happened," he said.