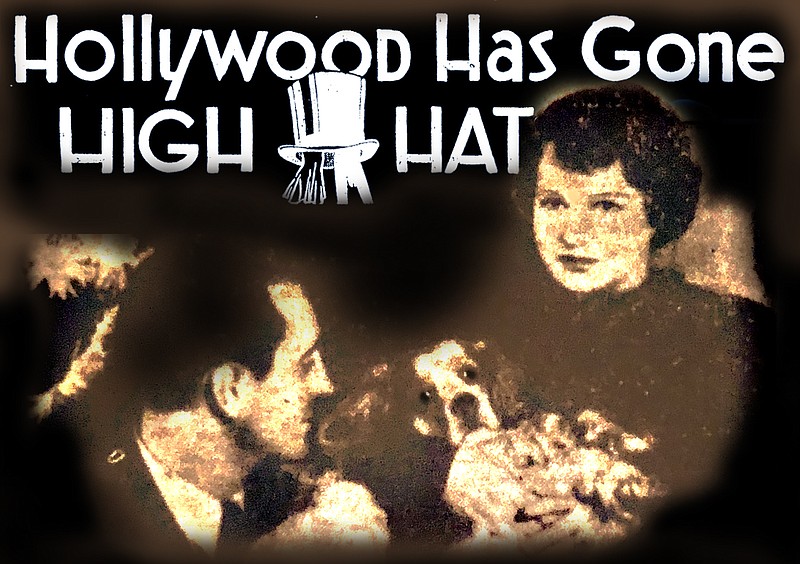 Basil (left) and Ouida Bergere Rathbone (the former Eula May Branch) at home in Hollywood with their dog, from the May 24, 1936, Arkansas Gazette. (Democrat-Gazette archives)

Our Old News about Ouida Bergere Rathbone (18??-1974) began with a Little Rock girl named Eula May Branch whose acting ambitions led to a significant enough career writing silent movies. But she was most remembered — or, used to be most remembered — for the A-list Hollywood parties she threw with husband Basil Rathbone.

Today, we have a bit of her own cultivated adult voice — thanks to the magical power of the printed word to induce auditory illusions. The May 24, 1936, Arkansas Gazette Sunday magazine published an interview with her by syndicated Hollywood gossip columnist Paul Harrison. (More about him below.)

Harrison argued that "Talkie-town" had risen above its money-grubbing beginnings. It had bookshops. Cigar-chewing producers spoke of "cinema." Grand opera played the Hollywood Bowl. Continental celebrities mingled in drawing rooms. "Put them all together and they spell culture," Harrison wrote.

What follows are excerpts from the interview — these are not my words.

For intellectual, artistic and titular distinction, there are no parties quite like those of the Basil Rathbones. Ouida Bergere Rathbone is a smallish, red-headed, dynamic cosmopolite with a considerable record of achievement behind her, and some spiritedly outspoken ideas for the future. They entertain more internationally known celebrities and titled visitors than any other couple in Hollywood.

Ouida Bergere knows her Hollywood well enough. For seven years she was head of the Paramount Scenario Department; wrote stories, adapted them, helped with the direction, even cut the film. When specialization came into movie production, and producers, supervisors and cutters began meddling with her ideas she quit. Went to New York and designed theater sets, and married Actor Rathbone.

Let peppery Mrs. Rathbone tell you about what has happened to Hollywood:

"I came here in 1918 and always hated it. People thought I was an unconscionable snob, but I really did hate it. I loathed the palms, the climate, the tennis, the Pacific Ocean and its beaches covered with tar. I shunned the sun. I never have worn slacks or shorts.

"There was no theater, no opera, no music, art nor literature. The only interest in literature was speculation on whether certain stories could be distorted enough to be made into movies.

"I went to party after party, and they were all exactly alike. The women always were dressed fit to kill, and the men had so little respect for them that they refused to dress and came in anything — even golf clothes.

"There was always a buffet dinner with the same things to eat. You elbowed through the crowd and scattered a few beans and some ham on your plate, and then rushed for a place at a rickety card table. The table would be too low or too high for your chair, and probably would be occupied by three bores whom you wouldn't have dined with under any other conditions.

"Sometimes the men and women would mingle again, and sit around and drink orange juice and gin and play games. They'd play Guggenheim. Or they'd draw slips out of a hat, and everybody had to make a one-minute speech on the subject written on his slip. Most of the subjects were vulgar. It was all supposed to be very funny."

So Ouida Bergere hated Hollywood and Basil Rathbone hated Hollywood. When they offered him a fat new contract in 1931, he tore it up and they went back to the New York and European stages. And they renewed friendships with artists and writers and musicians, diplomats, poets and playboys.

"When Basil said we were coming back this time," continued his wife, "I thought it was the end of everything. I said: 'One thing you must do — get me as far away from Beverly Hills as possible — out of the deadly suburban atmosphere. I don't want a single palm tree or swimming pool or even poinsettias.'

"So we got this house out east of the colony, and I redecorated the place and threw out the atrocities, and remodeled the mongrel architecture and made English flowers grow in the garden.

"One day, Basil said he hadn't heard me make a single complaint about Hollywood. I got to thinking about it and said, 'Basil, Hollywood has grown up. It's civilized!'

"And it is civilized — the writers and artists, musicians and great actors, titled people and society people are coming here, and love it. You find Hugh Walpole and James Hilton and H.G. Wells and Somerset Maugham. You see Lord and Lady Plunket, the Earl of Carnarvon, Lord and Lady Cavendish, Lady Padget, Lady Furness and Lady Mendl; and the Rhinelander Stuarts, Astors, Vanderbilts and Whitneys.

"Leopold Stokowski has been here, and says that all great music eventually will be heard through the medium of the screen. Wherever we have gone abroad, people want to know about Hollywood, and ask if it is true that the intelligentsia of the future will certainly flock here. It is.

"There are fewer buffet dinners now. If I have 50 guests, they'll all be seated in substantial chairs at substantial tables, and they'll get good food and wines, expertly served. I don't hire a colored girl to bang a piano and moan blues-tunes. I always have a Hungarian orchestra, and it plays good music -- mostly Strauss. Not a single party game has been played in this house since we have lived here. My guests talk about things other than movies."

Harrison continued, "It goes without saying that a great many Hollywood people entertain quietly and correctly these days. Mary Pickford has been less in the social picture than usual. There's evidence that the Frederic Marches would like to be patrons of symphony or ballet. Joan Crawford has forgotten the fringed-skirt-and-Charleston days, and is now Joan Tone. It was she who sponsored the reception for Stokowski.

"Mrs. Basil Rathbone has quietly initiated a project for a huge cultural center in Hollywood, something on the order of Rockefeller Center in Manhattan. There will be studios for the hundreds of teachers; offices for enterprises allied with the screen; an opera company; a symphony orchestra; morning musicales; art galleries; dance recitals; a splendid theatre for legitimate plays.

As best I can tell, Ouida Rathbone did not endow the civic center of her dreams.

Another thing, about "Paul Harrison": That has become a semi-notorious pen name; but this 1936 writer could actually have been named Paul Harrison. See Valley Scribe writer Jenny Jordan's mention of her grandfather's gossip columns here: arkansasonline.com/425paul.

And finally, I regret to inform Friend Reader that I have found a smidgen more about Ouida/Eula in the archives of the Arkansas Democrat and Arkansas Gazette. It's about a family connection to a Nobel laureate and a famous poet.

Check back here May 2 for that.