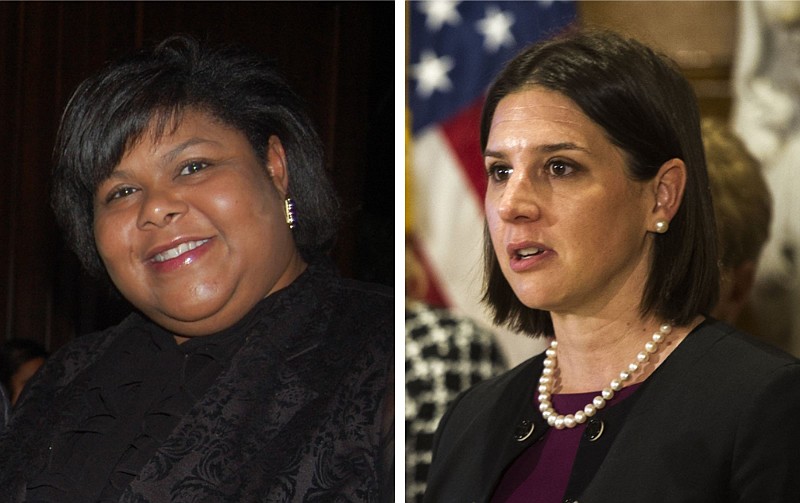 An emotional story about the challenges faced by a Black woman trying to start a business in the Delta is just one of many stories the Arkansas Women's Commission is collecting as part of large-scale study into the barriers for women joining the workforce.

The Arkansas Women's Commission met last week at the Arkansas Capitol where they heard from presenters Dr. Kristy Carter, director of marketing at the University of Central Arkansas, and LaTeasha Gaither-Davis, owner of Therapeutic Focus in West Memphis.

Carter presented a summary report compiled by UCA titled "Women of Color Business Owners and Entrepreneurs in Arkansas," which is a study to identify gaps in Arkansas' entrepreneurial ecosystem and the services provided by support organizations to women of color as they venture to establish their own business.

Gaither-Davis said her story about starting a business and what barriers she faced lined up with the research presented to the Women's Commission.

Alison Williams, chief of staff for Gov. Asa Hutchinson and head of the Arkansas Women's Commission, said in an interview Wednesday this presentation was part of a third of 10 anticipated meetings of the full commission.

"It is my hope and general expectation that presentations and research gathering will be ongoing until October, when we really start to pull the written report together," she said in an email. "I don't want to presuppose any recommendations at this point. The Governor's Executive Order calls for a public presentation of the Commission's findings, so the presentations, data, anecdotes, etc. we collect in the next 7.5 months will all inform the final report."

A study done by Arkansas Asset Funders Network stated that one in four small businesses are women-owned, with about 80,000 women-owned businesses contributing nearly $10 billion in revenue to Arkansas' economy.

The study stated that of the $1 billion in federal Small Business Administration financing to Arkansas small businesses from 2015 to 2019, only 1.2% ($12 million) supported Black-owned businesses while 1.8% ($18 million) supported Latin-American-owned businesses. The same study also said that over three years, Arkansas business owners of color applied for lending at a disproportionally lower rate than white businesses owners but were denied lending at a higher rate.

In the United States, 5.4 million businesses are owned by women of color who employ 2.1 million people and generate $361 billion in revenue annually, a 2019 study titled "The State of Women-Owned Businesses, American Express Report" stated. The study stated on average, 849 net new women-owned businesses were added every day to the economy because women of color turned to entrepreneurship in dramatic numbers.

Carter's presentation is part of the research gathering being done by the Women's Commission.

In 2020, the Women's Foundation commissioned UCA Office of Institutional Diversity and Inclusion, specifically through its Minority Vendor Partnership Initiative, to conduct a follow-up study to findings from its 2018 study on the Economic Indicators of Women in Arkansas.

While that study found that Black women outpaced every other demographic in business creation, it remained unknown what contributed to the growth of these businesses and how women of color navigated the entrepreneurial ecosystem in Arkansas.

Carter said one of the main themes that resonated among participants in the study concerning racial bias and discrimination was the idea of perceived legitimacy, where women of color are not "seen" as credible business owners.

Gaither-Davis said she runs a pediatric care facility based out of West Memphis that provides occupational, physical and speech therapy services. She said that as a child she suffered from a speech delay and had to go to therapy, which became the catalyst for her interest into the industry.

"I was born and raised in West Memphis and graduated from UCA where I went to San Diego, Calif., for several years before going to south Texas because I wanted to experience a different culture," she said. "I wanted to be an amazing occupational therapist."

Gaither-Davis said that when she would go back home, people would always mention how they needed more health care providers in West Memphis who looked like her because there was a limited number of therapy practitioners in the city.

"Every time I went back I would say that I would pray that someone will be sent y'alls way and then I realized I was praying about myself," she said with a laugh. "I had to stop praying for a solution and be the solution."

Gaither-Davis said that when she came back she found her career being blocked by inequity and institutionalized barriers.

"My first day on the job after creating my business I received a threat from one of the largest pediatricians in the area," she said. "The doctor told me that people come to our area and try to open businesses and they don't succeed and I will make sure that you don't succeed as well."

Gaither-Davis said this was a big deal because many of the patients she sees don't have a lot of money and to receive Medicaid benefits they need a referral.

"I can count on one hand the number of referrals I have received from this place," she said.

Despite this threat, Gaither-Davis continued to operate in West Memphis and eventually decided to buy a building instead of renting. She said this is where she ran into another barrier: the lack of access to capital.

"I went to a large bank and filled out all the paperwork and was excited to get started and then I was told I had been denied," she said. "I then went to a small community bank and once again I was denied."

"Here I am, a homeowner, a business owner for nearly a decade and I need a co-signer," she said. "When I would talk to my counterparts I realized how different things were for them. They were trying to decide how much capital they will access and I am trying to figure out where I can go to find it."

Gaither-Davis also said starting a business in a rural area has its own set of challenges as entrepreneurs have to take on powers and relationships that have been in place for years.

"I lost contracts just because of who I am," she said. "Because I don't have a powerful family."

Gaither-Davis recalled when she was forced to lay off three employees when she suddenly lost a contract she had with a school for six years.

"I asked them why? They told me Latisha you have done an amazing job and you have done nothing wrong. But we have a friend who has therapy contract and we want to give them a chance," she said.

Gaither-Davis also cited a contract with a school district she really admired. But, it gave her only one student. She said she pushed on despite only being given two students in the contract's second year. Then, she said, that while the school district mentioned the need for more occupational services, she would later learn someone had replaced her in the position.

"I was crushed. So I asked why. They told me I wasn't local enough," she told the commission through emotion. "I was thinking how local can you get I live there and I am the only female minority provider."

Gaither-Davis said that after this incident, she learned that there wasn't going to be a fair and equitable procurement process where she was located and she decided to take her services to another state to find a contract.

"Guess what, I won. Because of my qualifications," she said. "They recognized that I am definitely competent to perform the services. Once again I found myself in a pivotal moment in my life because it made me realize that it was just not me. This was something bigger than me."

This put Gaither-Davis in a situation that she said many women might find themselves in as business owners in Arkansas.

"I asked myself if I should seek legal counsel or just deal with it. There is that fear of retribution. Should I speak out and risk losing more business or be silent and continue to take it," she said.

Instead, Gaither-Davis said she got involved in fellowships and entrepreneurship programs and found the experience life changing.

"For the first time I felt like I was not alone," she said. "I realized my experience was no anomaly. So many people who looked like me were having the same struggles and the same problems on a daily basis. I believe that if women can be empowered and if they can be supported they can make an impact in a positive way."