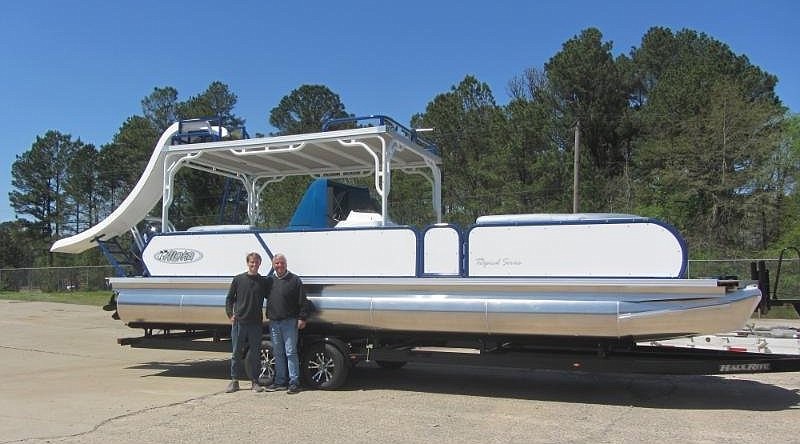 Tom Cox and son Trey stand near one of Waco’s Aloha Pontoon Boats. (Special to the Democrat-Gazette/Marcia Schnedler)

Freshly moved in March into a much larger assembly plant in Little Rock, Waco Manufacturing aims to expand its family business as the South's oldest maker of pontoon boats.

"We're determined to keep growing," says the company's president and Chief Executive Officer Tom Cox, whose father Charles F. Cox and great uncle W.J. Waymack founded Waco in 1960. "We expect that our present staff of 80 will grow to as many as 150 over the next year or two. And we have plans to open a second manufacturing facility in Florida this fall."

Son Trey, a former star quarterback at North Little Rock High School, works on the assembly of Aloha Pontoon Boats after a stint as a Razorbacks student assistant wide receiver coach at the University of Arkansas, Fayetteville.

"Trey's role here will continue to expand," Cox says, "as he works his way into leadership of our Aloha Pontoon assembly department."

The pontoon boats are one of the company's three product lines, along with Waco Aluminum Jon Boats and Edge Duck Boats. The covid outbreak challenged the firm starting in March 2020, as it did almost everything, although not entirely in a negative way.

"The pandemic severely disrupted our operations through employees contracting the virus and their relatives getting it," Cox says. "We also have employees with young children whose schools were closed, especially during the first year of covid.

"And we are still wrestling with severe supply-chain shortages of materials needed to complete our products, plus the challenges presented by rising inflation. But we have received one silver lining, and it is that many people have gravitated to outdoor recreational activities such as boating."

Waco faced an even tougher challenge when the Great Recession struck in 2008. Consumer demand for pleasure craft fell to the point that the company's production dropped from four or five boats a day to just one. Layoffs became necessary as the workforce fell to 22, before increasing nearly fourfold as plans proceed for further growth.

Cox calls the recent move from North Little Rock to the complex of four buildings at 11850 Arch St. "one of my most rewarding experiences at Waco." He began working for the family company at age 12 in May 1983 — "primarily in the factory the first few years. I still do assembly work myself. I love being hands-on and present with our associates every day." 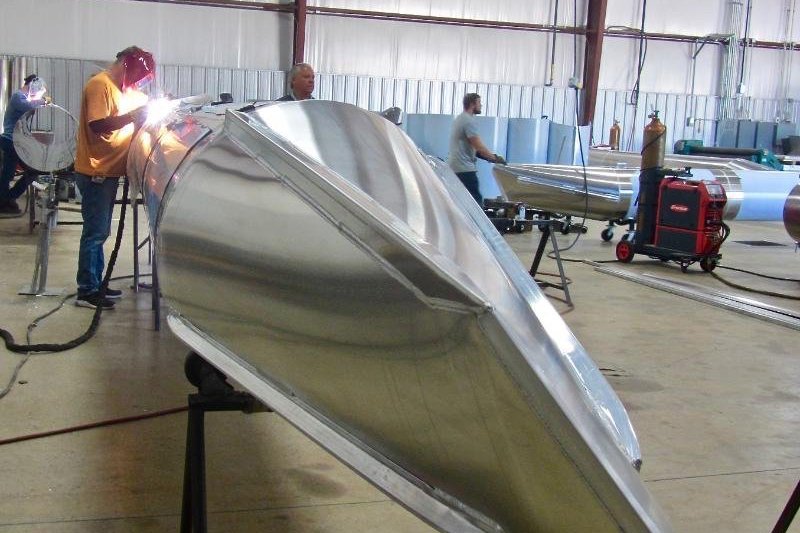 Pontoons in a variety of lengths are made for Waco’s Aloha boats. (Special to the Democrat-Gazette/Marcia Schnedler)
The Aloha catalog opens with a captivating slogan: "Let the dreamer loose." The pontoon models carry alluring names like Paradise, Tropical and Patriot. The Patriot is billed as an upgraded revival of a "limited edition" series previously manufactured in 2002-2004.

Many Aloha sales are made through a network of some 75 boat dealers and marinas across the United States. Some boats are exported to Australia. The company also customizes and refurbishes its customers' boats.

Cox lauds his workforce as "resilient, as shown by all they've weathered in the last three years." On the Aloha assembly lines, the staff continues to deal with new design changes in what he calls "an extremely popular form of boating that is continuing to evolve." The largest Alohas today are 32 feet long, but plans envision models 40 to 50 feet in length.

Personally, Cox is an ardent boating enthusiast. "I just love being on the water, which is one reason I was attracted to this industry," he says. "My personal favorite is Lake Ouachita. My wife and I get out there as often as possible. I believe it helps you refresh mentally to be on the water."