Cutting down the Nets: Boston finishes off sweep of Brooklyn 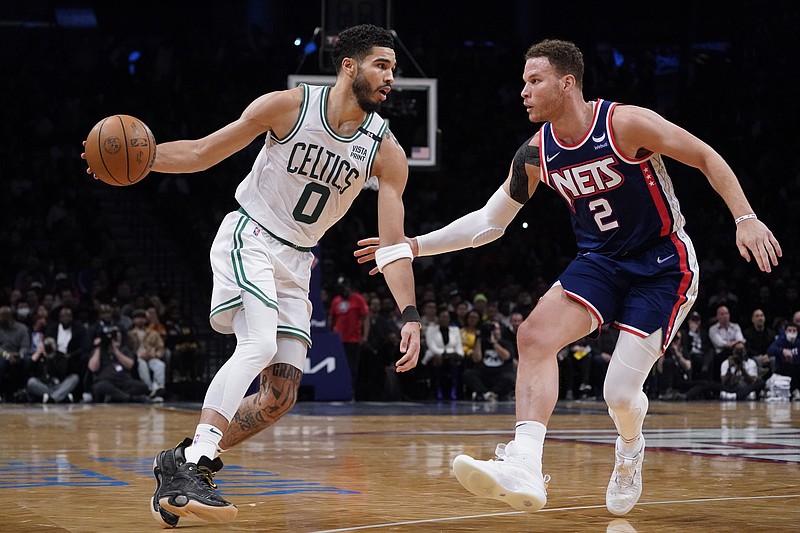 NEW YORK -- Jayson Tatum scored 29 points, Jaylen Brown had 22 and the Boston Celtics completed a four-game sweep of the Brooklyn Nets, becoming the first team to reach the second round of the playoffs with a 116-112 victory Monday night.

Marcus Smart added 20 points and 11 assists for the No. 2-seeded Celtics, who made easy work of what was thought could be a tough series. Boston will wait for the winner of the series between Milwaukee and Chicago. The defending champion Bucks hold a 3-1 lead in that series.

The Celtics showed no fear of the Nets, winning on the final day of the regular season instead of losing to fall down the standings and avoid them.

Turns out, there was no reason to worry.

"It's funny to us, because we don't duck and dodge anybody," Smart said. "We knew what we were going to come in here and do."

Kevin Durant had 39 points, nine assists and seven rebounds, breaking free after the Celtics had defended him well in the first three games. But he couldn't get the Nets the win they needed to extend what instead goes down as a massive failure of a season.

Expected to be an NBA Finals contender, the Nets needed a strong finish just to grab the No. 7 seed.

Seth Curry scored 23 points for the Nets. Kyrie Irving, whose unavailability for home games much of the season because he isn't vaccinated against the coronavirus contributed to the Nets performing so far below expectations, had 20 points.

"A lot of stuff that may factor into why we lose, but they were just a better team," Durant said.

The Celtics were under .500 at the midpoint of their season but went 31-10 from there, with Tatum emerging as the scoring star on one of the NBA's best defensive teams.

That defense limited Durant to just 19-for-52 shooting with 17 turnovers through the first three games and made it tough for him, even as he finally got more shots to drop Monday. He was only 13 of 31 from the field, 3 for 11 behind the arc.

He lost in the first round for the first time since 2010 with Oklahoma City, the first playoff series of his career. He had won nine straight first-round series.

Tatum had 12 points in the third quarter and the Celtics opened a 90-75 lead in the closing seconds of the period. But he went to the bench with a fifth foul with 8:17 remaining and the Nets made a push that got them within three points about three minutes later.

Tatum fouled out with the Celtics leading by six with 2:48 to play. Irving made a 3-pointer and Durant scored to cut it to 109-108 with 1:28 remaining. But after a basket by Brown, Durant could only make one free throw and the Celtics rushed down the floor, with Al Horford putting back Smart's miss to make it 113-109 with 13 seconds left.

Tatum was surprised by his sixth foul, but said he had no doubt the Celtics would hang on without him.

"Couldn't believe it at all, but I think that's what we're built for," Tatum said.

With Durant, Irving and James Harden, the Nets began the season as a team that looked potent enough to win their first NBA title. But Irving didn't play at all to begin the season, and not long after he came back playing road games only, Harden became unhappy and the Nets dealt him to Philadelphia in a trade for Ben Simmons.

The Nets hoped they could have Simmons make his debut for them in Game 4, but he was ruled out Sunday with more pain in his back that has troubled him since not long after arriving in a midseason trade with Philadelphia.

Irving said his emotions were "disappointment, a little sadness, because we didn't play as well as a team as we wanted to."

Tatum didn't have a basket in the first quarter, but got started quickly in the second with two 3-pointers and another jumper. Durant kept the Nets close and they were down only 45-44 after he found Curry in the corner for a 3-pointer with 3:29 to play. But Grant Williams made three 3-pointers from then until the end of the half, with the final one giving Boston a 58-50 lead.

Boston swept its first-round series for the third time in four years. The Celtics beat Indiana in four games in 2019 and Philadelphia in 2020 at Walt Disney World. They lost 4-1 in the first round to the Nets last season. 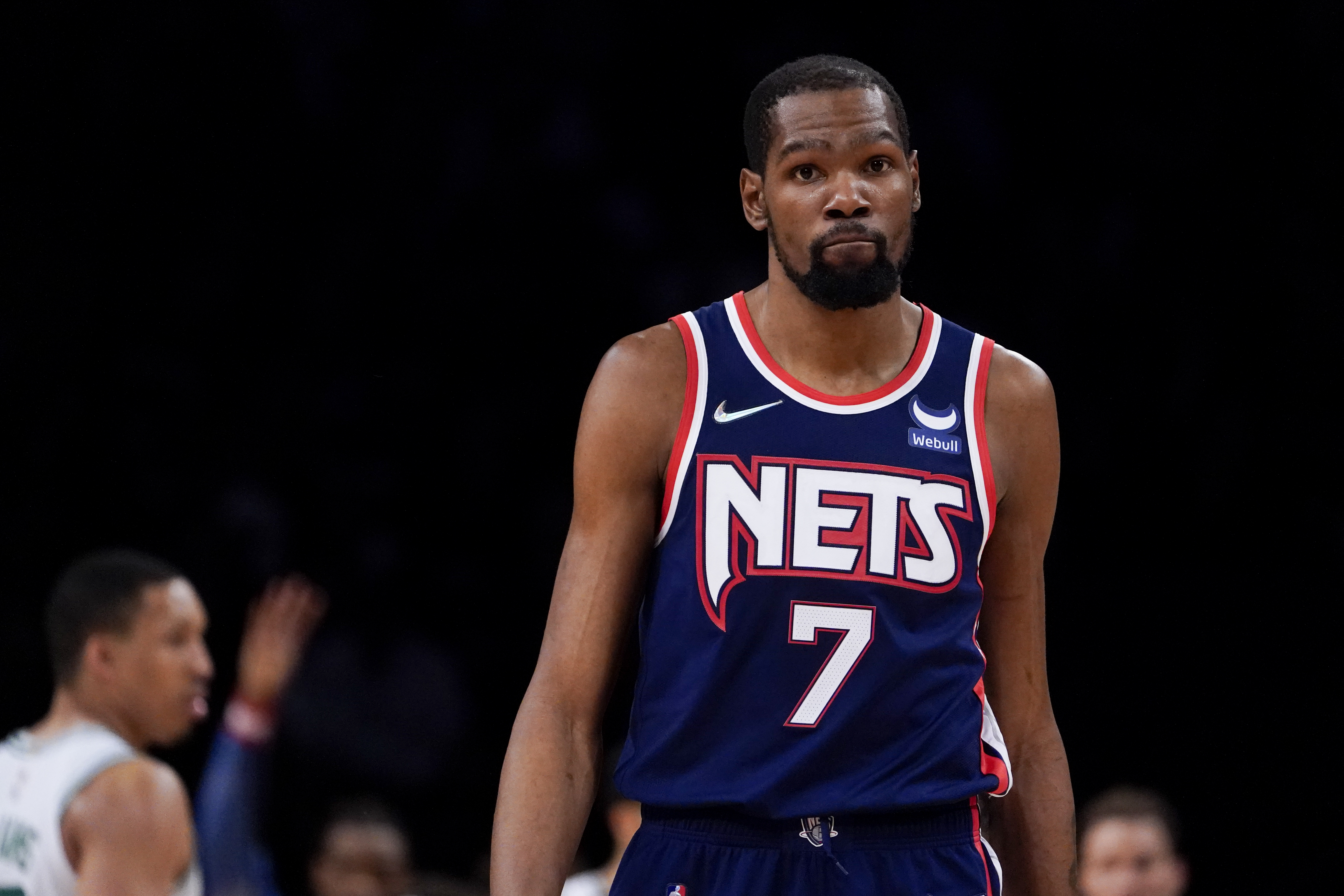 Brooklyn Nets forward Kevin Durant (7) reacts as his team trails during the second half of Game 4 of an NBA basketball first-round playoff series against the Boston Celtics, Monday, April 25, 2022, in New York. (AP Photo/John Minchillo) 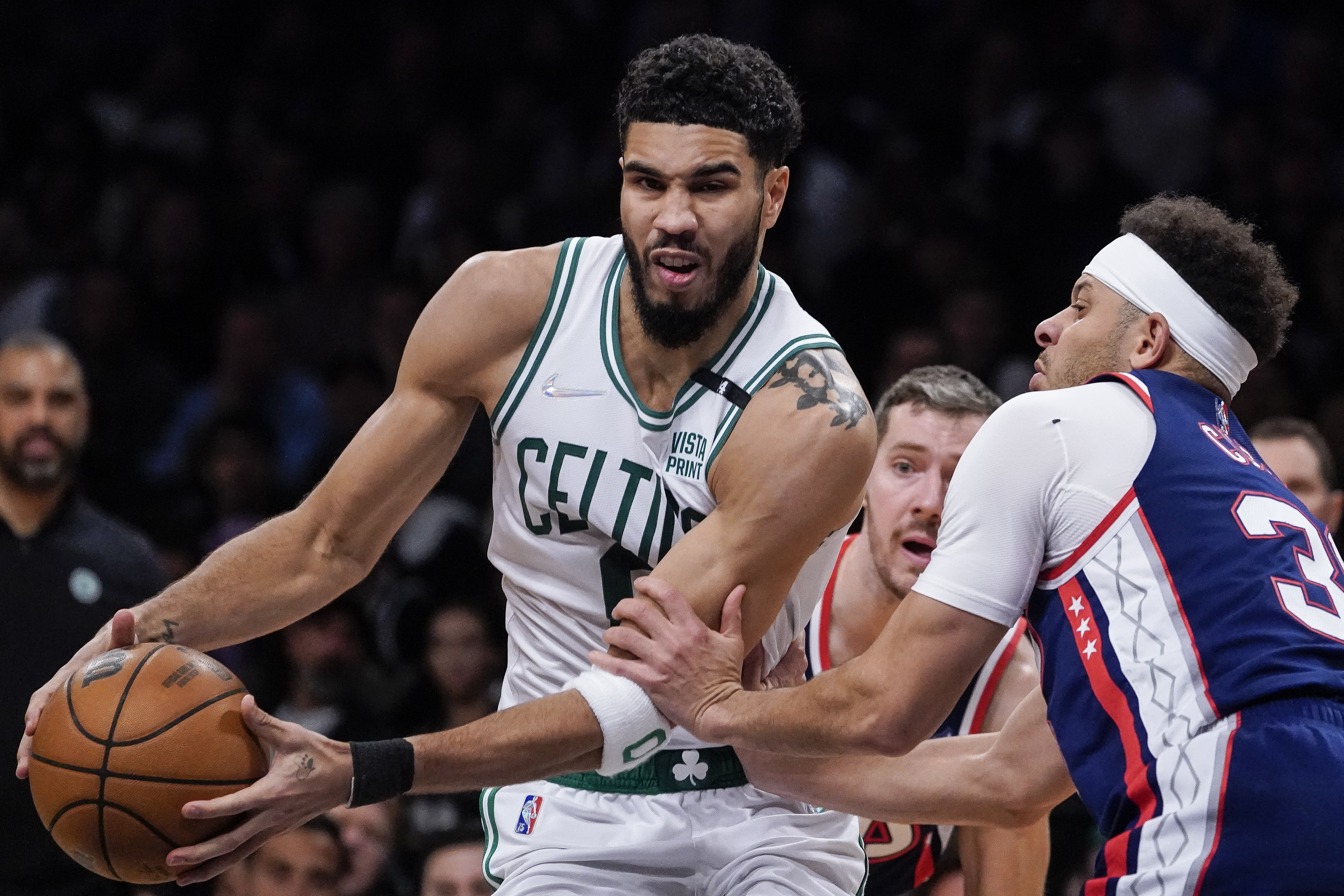 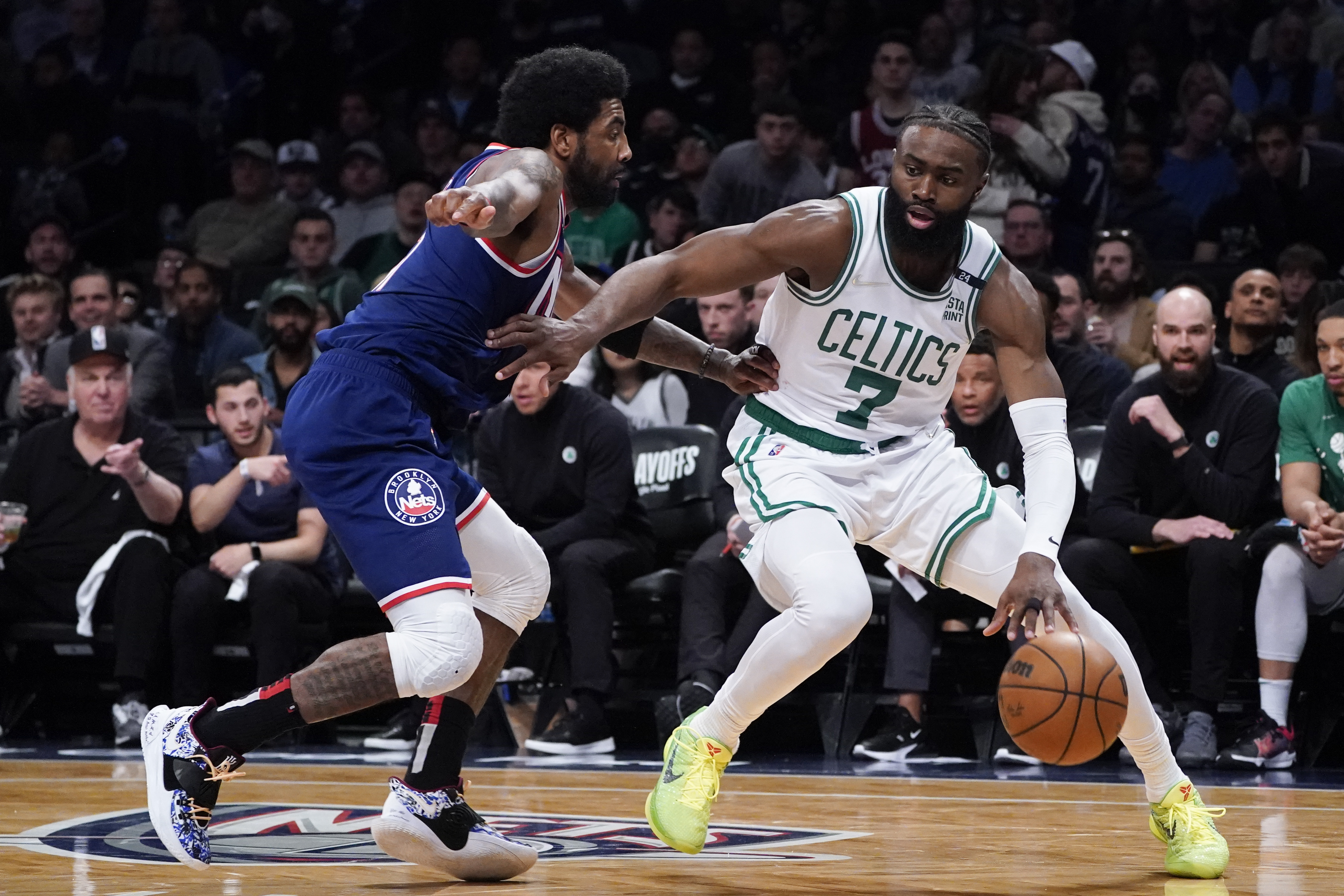 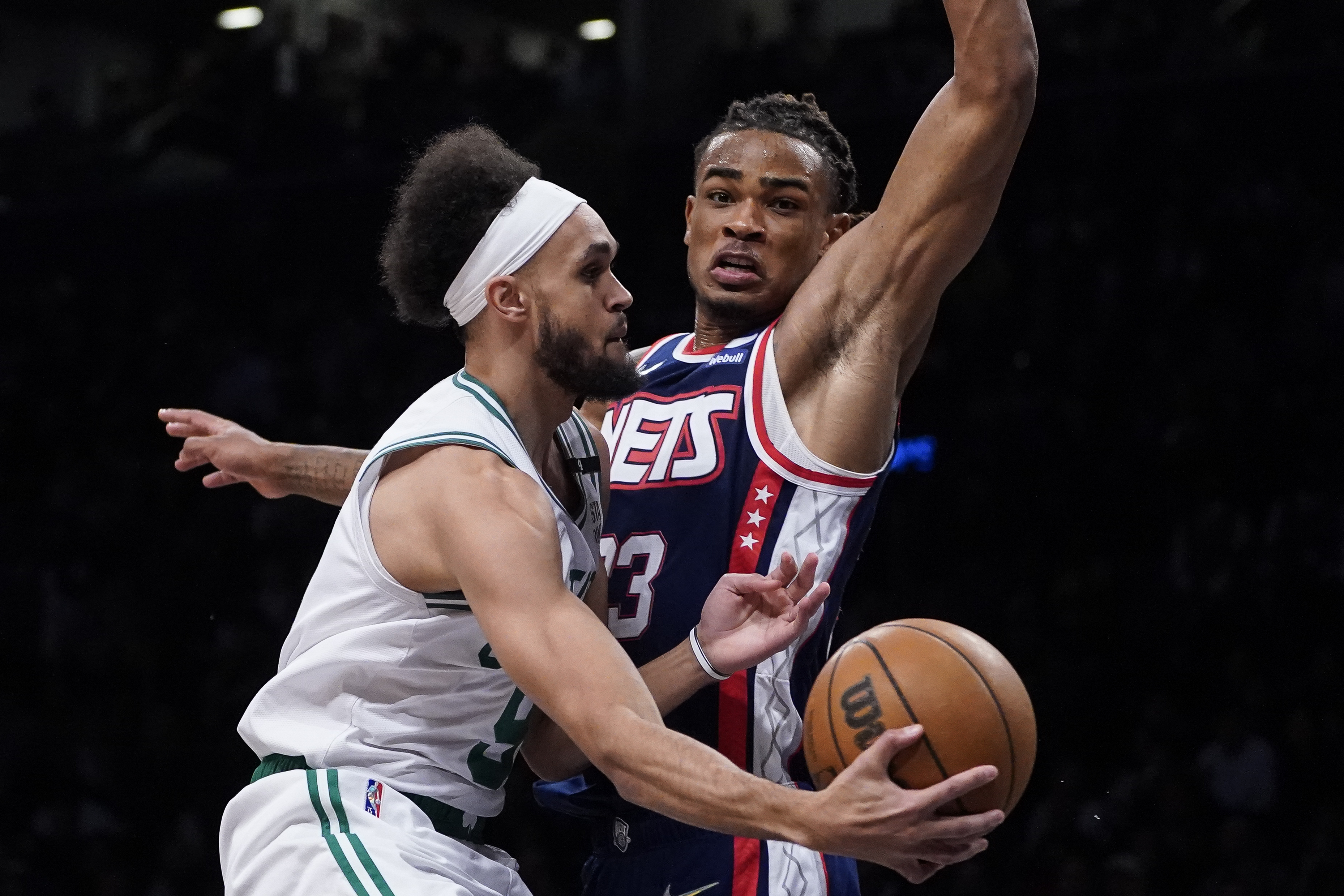 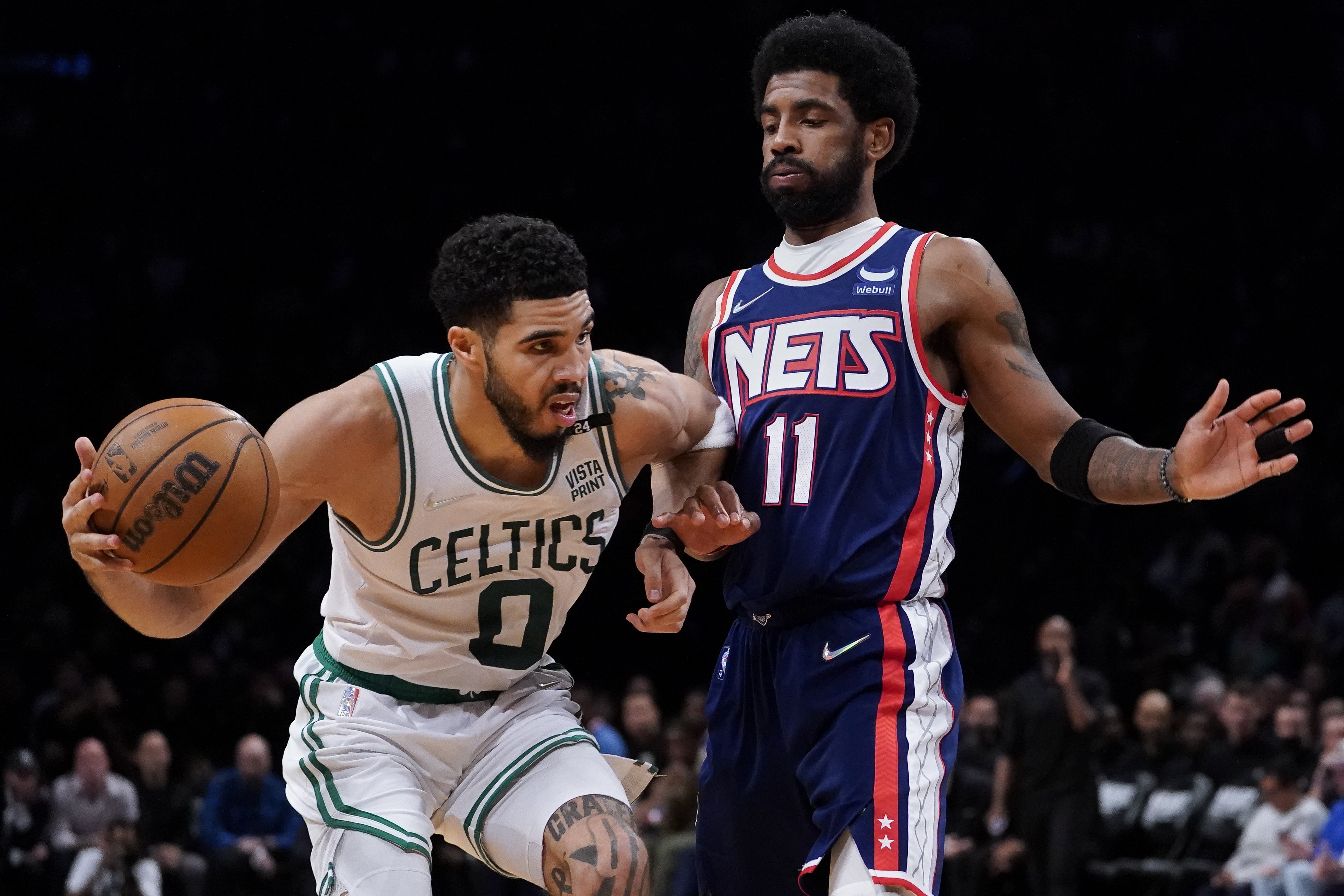 Print Headline: Cutting down the Nets