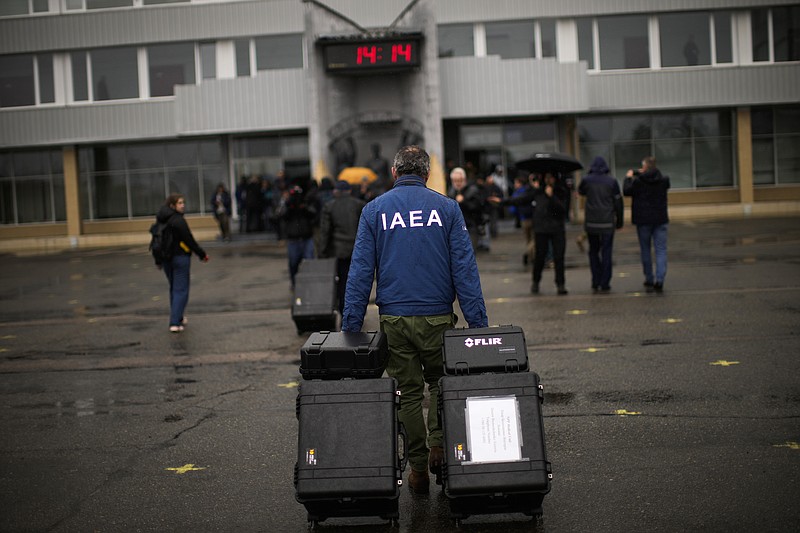 TORETSK, Ukraine -- The U.S. pressed its allies Tuesday to move "heaven and earth" to keep Kyiv well-supplied with weapons as Russian forces rained fire on eastern and southern Ukraine amid growing new fears the war could spill over the country's borders.

For the second day in a row, explosions rocked the separatist region of Trans-Dniester in neighboring Moldova, knocking out two powerful radio antennas close to the Ukrainian border. No one claimed responsibility for the attacks, but Ukraine all but blamed Russia.

U.S. Defense Secretary Lloyd Austin convened a meeting Tuesday of officials from about 40 countries at the U.S. air base at Ramstein, Germany, and said more help is on the way.

"This gathering reflects the galvanized world," Austin said, adding that he wanted officials to leave the meeting "with a common and transparent understanding of Ukraine's near-term security requirements because we're going to keep moving heaven and earth so that we can meet them."

Austin said the United States is examining the cause of the explosions and is "not really sure of what's that all about."

"Certainly, we don't want to see any spillover," he said. "It's important to make sure that we do everything that we can to ensure that Ukraine is successful. And that's the best way to address that."

Pentagon spokesman John Kirby told CNN in an interview earlier Tuesday that it was too soon "to know exactly what happened here, who's responsible."

"We're watching this as best we can," he told the news network.

The southern Ukraine coastline and Moldova have been on edge since a senior Russian military officer said last week that the Kremlin's goal is to secure not just eastern Ukraine but the entire south, so as to open the way to Trans-Dniester, a long, narrow strip of land with about 470,000 people along the Ukrainian border where about 1,500 Russian troops are based.

It was not clear who was behind the blasts in Trans-Dniester, but the attacks gave rise to fears that Russia is stirring up trouble so as to create a pretext to either invade Trans-Dniester or use the region as another launching point to attack Ukraine.

A Moldovan government body warned Monday of possible attempts to "create pretexts for straining the security situation in the Transnistrian region."

Ukrainian President Volodymyr Zelenskyy said the explosions were carried out by Russia and were "designed to destabilize," with the intention of showing Moldova what could happen if it supports Ukraine.

Kremlin spokesman Dmitry Peskov said Tuesday that Russia doesn't know who was responsible for the attacks but suspects an attempt to "destabilize the situation."

Meanwhile, the head of pro-Moscow separatist forces fighting to expand their grip in eastern Ukraine, Denis Pushilin, said the latest incidents in Transnistria "would require the continuation" of Russia's military operations.

And the head of Transnistria, Vadim Krasnoselsky, on Tuesday blamed Ukraine for "traces of terrorist attacks," according to Russian news agency Tass.

Moldovan President Maia Sandu accused factions in the separatist region of attempting "to destabilize the situation."

The Washington Post could not independently verify the claims made by any side.

After unexpectedly fierce resistance by Ukrainian forces thwarted Russia's attempt to take Ukraine's capital, Moscow now says its focus is the capture of the Donbas, the mostly Russian-speaking industrial region in eastern Ukraine.

In the small city of Toretsk in the Donbas, residents are struggling to survive, collecting rainwater for washing up and fervently hoping for an end to the fighting.

"It's bad. Very bad. Hopeless," said Andriy Cheromushkin. "You feel so helpless that you don't know what you should do or shouldn't do. Because if you want to do something, you need some money, and there is no money now."

Russian advances and heavy fighting were reported in the Donbas, with one town, Kreminna, apparently falling after days of street-by-street fighting, according to the British military.

In the gutted southern port city of Mariupol, authorities said Russian forces hit the Azovstal steel plant with 35 airstrikes over the past 24 hours. The plant is the last known stronghold of Ukrainian fighters in the city. About 1,000 civilians were said to be taking shelter there with an estimated 2,000 Ukrainian defenders.

"Russia has drastically intensified strikes over the past 24 hours and is using heavy bunker bombs," said Petro Andryushchenko, an adviser to Mariupol's mayor. "The number of those wounded will be clear once the rubble is cleared."

He also accused Russian forces of shelling a route it had offered as an escape corridor from the steel mill.

Beyond Mariupol, local officials said at least nine people were killed and several more wounded in Russian attacks on towns and cities in the east and south. Pavlo Kyrylenko, governor of the Donetsk region of the Donbas, said on the Telegram messaging app that Russian forces "continue to deliberately fire at civilians and to destroy critical infrastructure."

Ukraine also said Russian forces shelled Kharkiv, the country's second-largest city, which lies in the northeast, outside the Donbas, but is seen as key to Russia's apparent bid to encircle Ukrainian troops in the Donbas from the north, east and south.

Ukrainian forces struck back in the Kherson region in the south.

The attack on the bridge near Odesa -- along with a series of strikes on key railroad stations a day earlier -- appears to mark a major shift in Russia's approach. Until now, Moscow has spared strategic bridges, perhaps in hopes of keeping them for its own use in seizing Ukraine. But now it seems to be trying to thwart Ukraine's efforts to move troops and supplies.

With the potentially pivotal battle for the east underway, the U.S. and its NATO allies are scrambling to deliver artillery and other heavy weaponry in time to make a difference.

German Defense Minister Christine Lambrecht announced at the meeting that Berlin would send Ukraine up to 50 armed vehicles, called Flakpanzer Gepard, designed to shoot down aircraft but also fire at targets on the ground.

Although no longer used by Germany, they have been acquired by Jordan, Qatar, Romania and Brazil, where they have been deployed to defend soccer stadiums from potential drone attacks during international tournaments, according to the manufacturer, Krauss-Maffei Wegmann.

The German government had previously cited a range of reasons to avoid shipping such heavy arms to Ukraine, including that none were readily available, that training Ukrainian soldiers to operate them was time-consuming, and that Russia could be provoked into a wider conflict.

But German officials changed course under growing pressure from the conservative opposition in Berlin, and from members of the governing coalition. Germany has also supplied Ukraine with shoulder-launched anti-tank rockets and surface-to-air defensive missiles, some from old East German stockpiles.

Austin noted that more than 30 allies and partners have joined the U.S. in sending military aid to Ukraine and that more than $5 billion worth of equipment has been committed.

The U.S. defense secretary said the war has weakened Russia's military, adding, "We would like to make sure, again, that they don't have the same type of capability to bully their neighbors that we saw at the outset of this conflict."

French President Emmanuel Macron has given a green light for the delivery of modern artillery pieces to Kyiv that could help stem Russia's new offensive in the east of the country.

Firing six rounds per minute over 25 miles or more, the truck-mounted Caesar cannons will allow Ukrainian crews to pound Russian troops from afar, then move and pound them again. Used to great effect against Islamic State forces in Iraq and in other conflicts, they represent a step up in France's assistance to Zelenskyy's government.

Macron didn't give numbers. Citing unidentified French sources, the newspaper Ouest-France said 12 Caesars will be drawn from the French arsenal and that 40 Ukrainian artillery soldiers were arriving for training at a military base in the south of France.

Macron said his "red line" remains not entering into direct conflict with Russia, but within that limit, "we must provide maximum help to the Ukrainians."

"We are delivering consequential equipment," he said. "We need to continue down this path."

His armed forces minister tweeted that thousands of shells would also be part of the delivery. Sunil Nair, an analyst who specializes in artillery systems for the defense publication Janes, said the cannons could be used independently of each other or together as a battery.

"It does give you firepower, no doubt about it," he said. "It's a question of how they use it and where they use it."

Before and after Russia's Feb. 24 invasion, Macron had kept an open line with Putin. His office said last week that the two leaders haven't spoken since March 29.

Macron says that, eventually, he'll need to pick up the phone again -- because not talking to Putin will allow the leaders of China, India and Turkey to take the lead in trying to negotiate the peace, whenever that time comes.

"We'll have to prepare a cease-fire at some stage, and Europe will have to be around the table," Macron said last week.

A senior Kremlin official, Nikolai Patrushev, warned that "the policies of the West and the Kyiv regime controlled by it would only be the breakup of Ukraine into several states."

Russia's foreign minister, Sergey Lavrov, said Tuesday that the influx of heavy weapons from Western countries was effectively pushing Ukraine to sabotage peace talks with Moscow, which have shown no concrete signs of progress.

"They will continue that line by filling Ukraine with weapons," Lavrov said after meeting in Moscow with U.N. Secretary-General Antonio Guterres, who was undertaking his most active effort yet at diplomacy to halt the war. "If that continues, negotiations won't yield any result."

Guterres met with Russian President Vladimir Putin, and the U.N. said they agreed in principle that the United Nations and the International Committee of the Red Cross should be involved in the evacuation of civilians trapped in the steel plant in Mariupol. Putin said Ukrainian troops were using civilians in the plant as shields and not allowing them to leave. 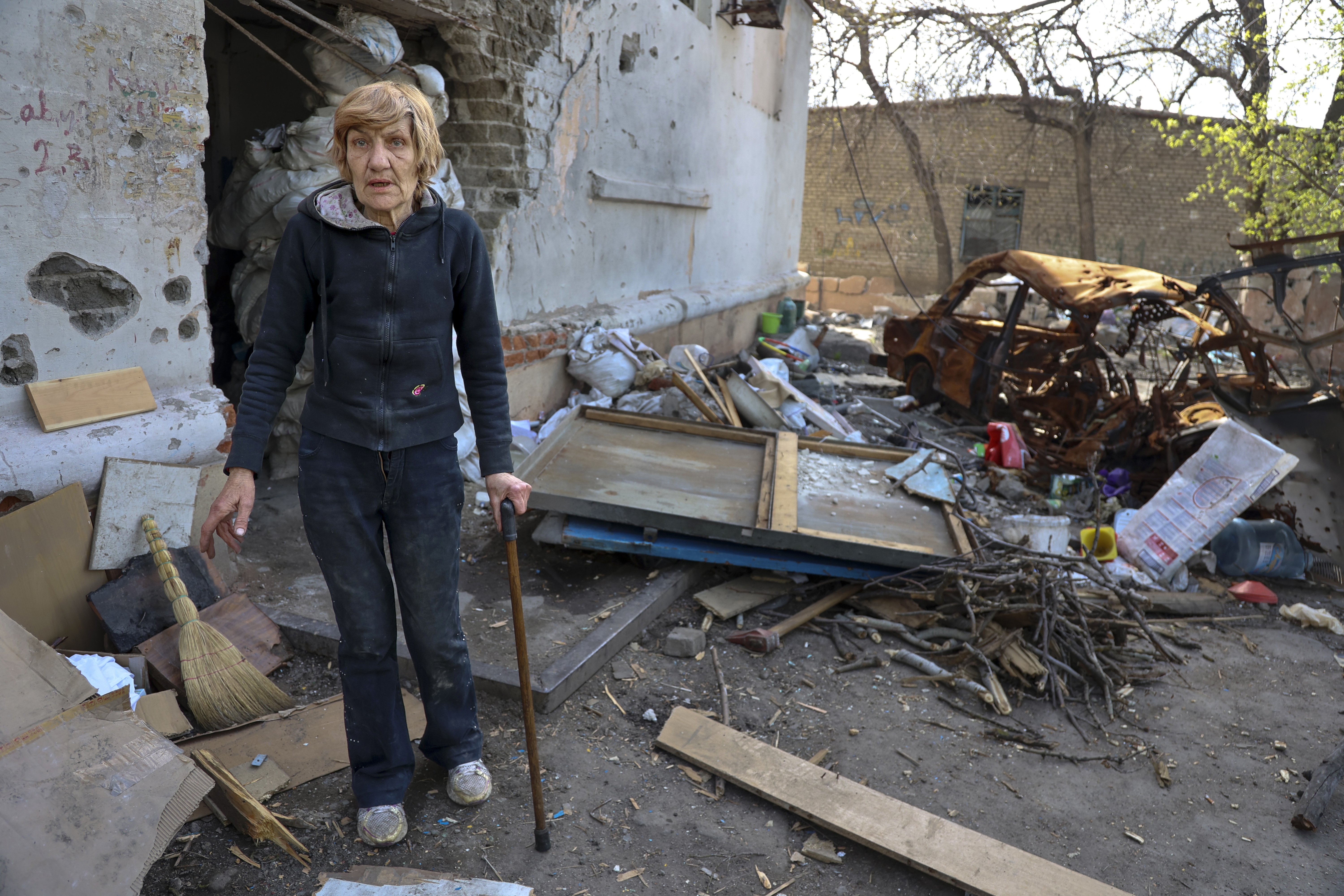 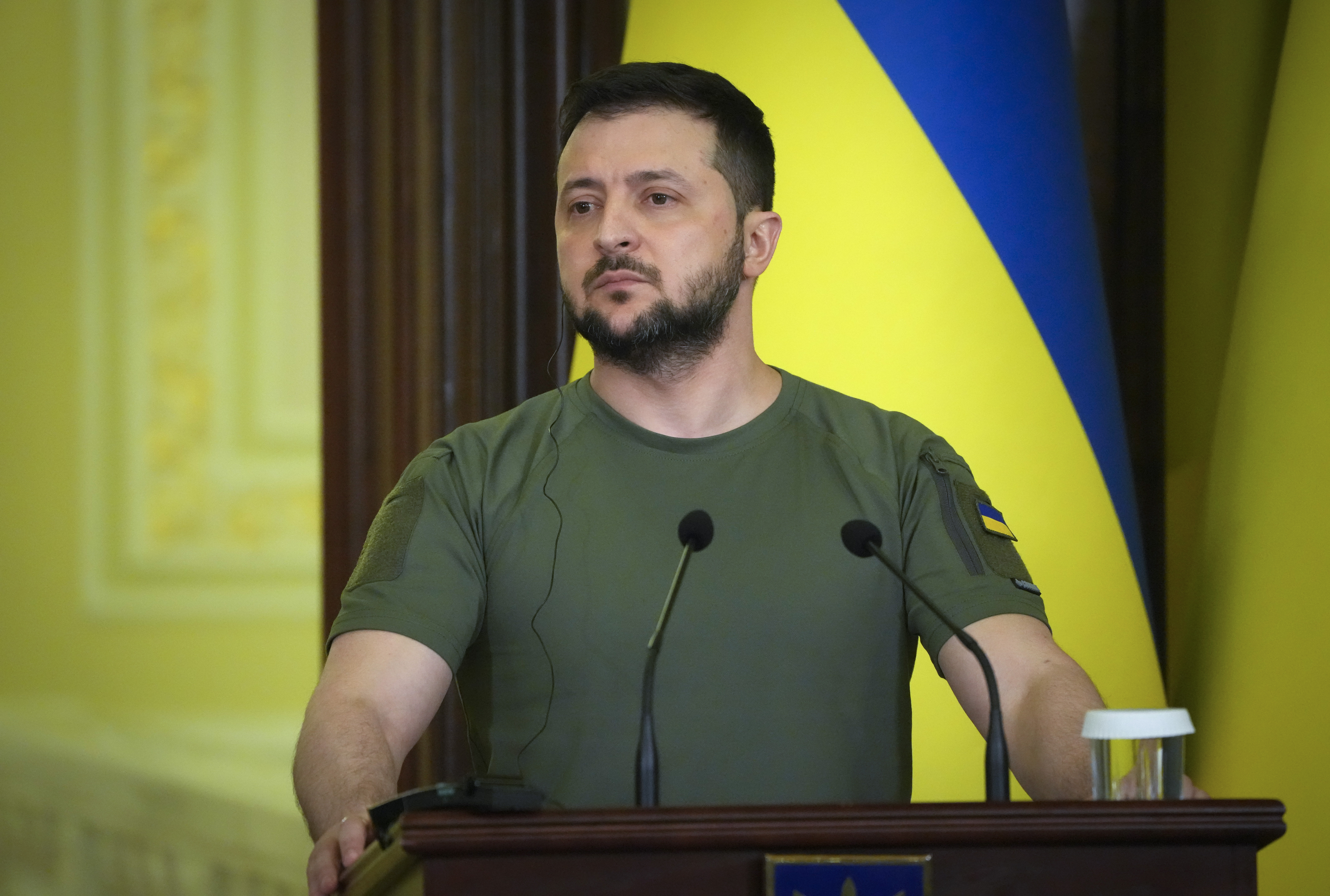 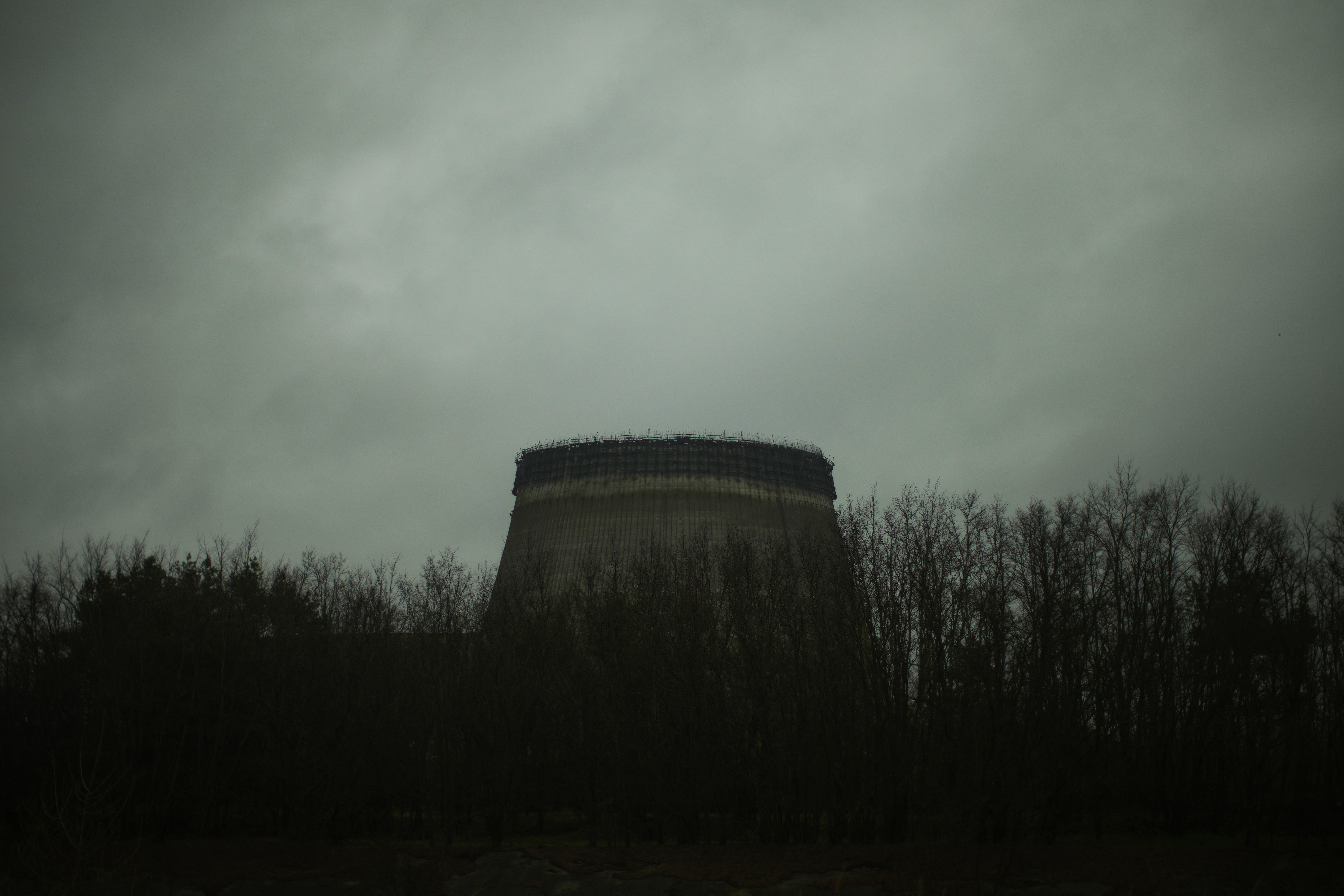 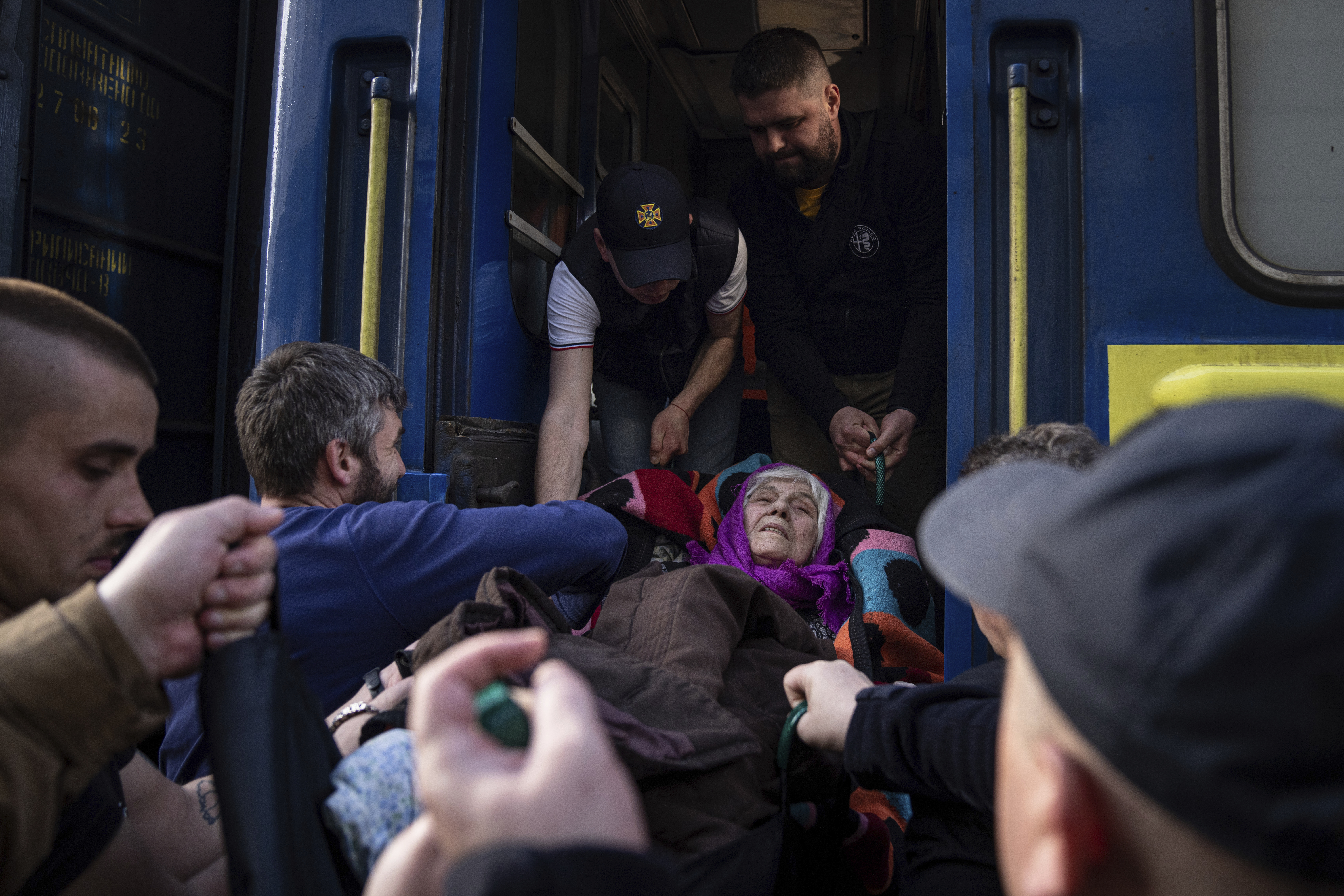 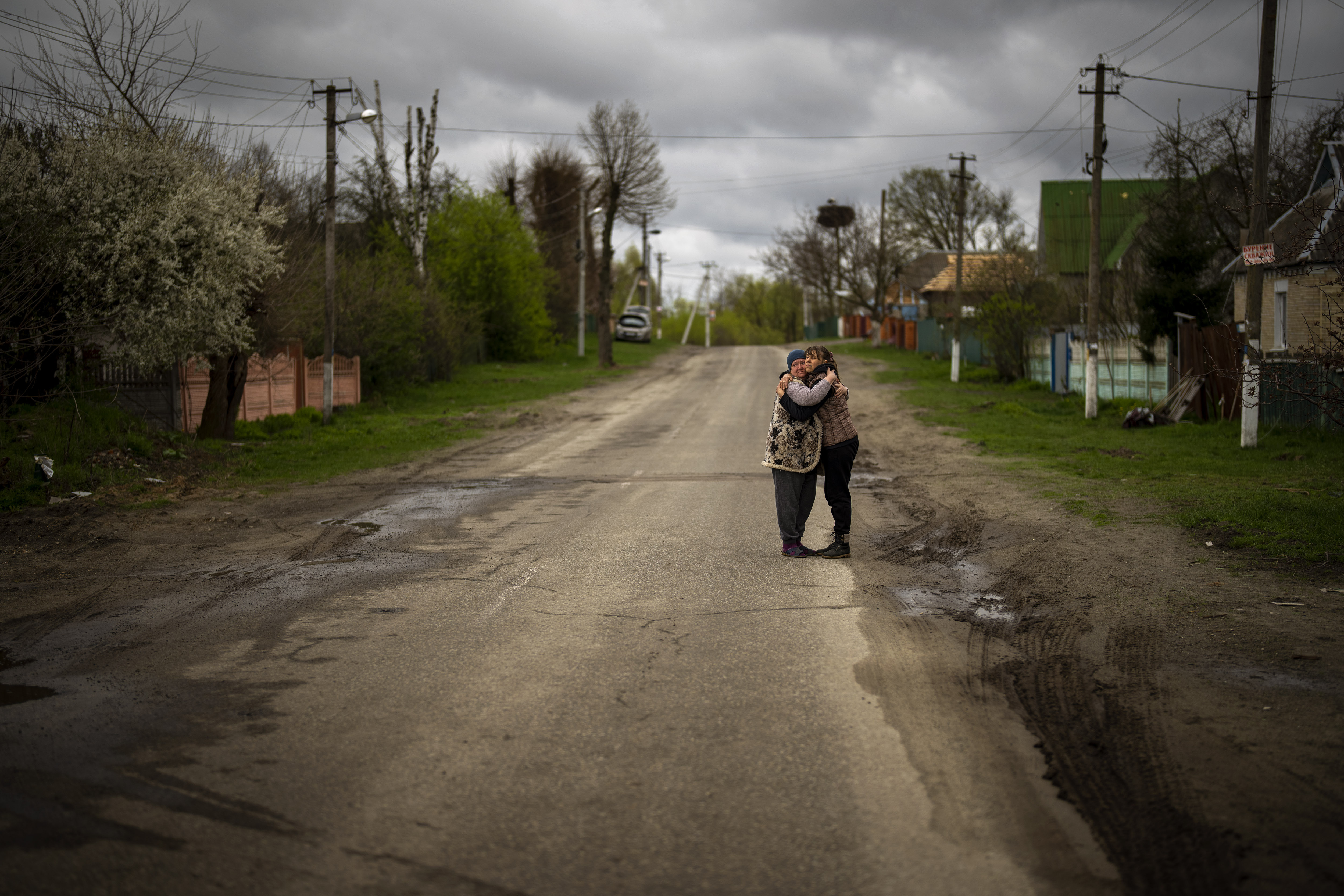 Tetyana Boikiv, 52, right, meets and hugs her neighbour Svitlana Pryimachenko, 48, during a funeral service for her husband, Mykola Moroz, 47, at the Ozera village, near Bucha, Ukraine on Tuesday, April 26, 2022. Mykola was captured by Russian army from his house in the Ozera village on March 13, taken for several weeks in an unknown location and finally found killed with gunshots about 15 kilometres from his house. (AP Photo/Emilio Morenatti) 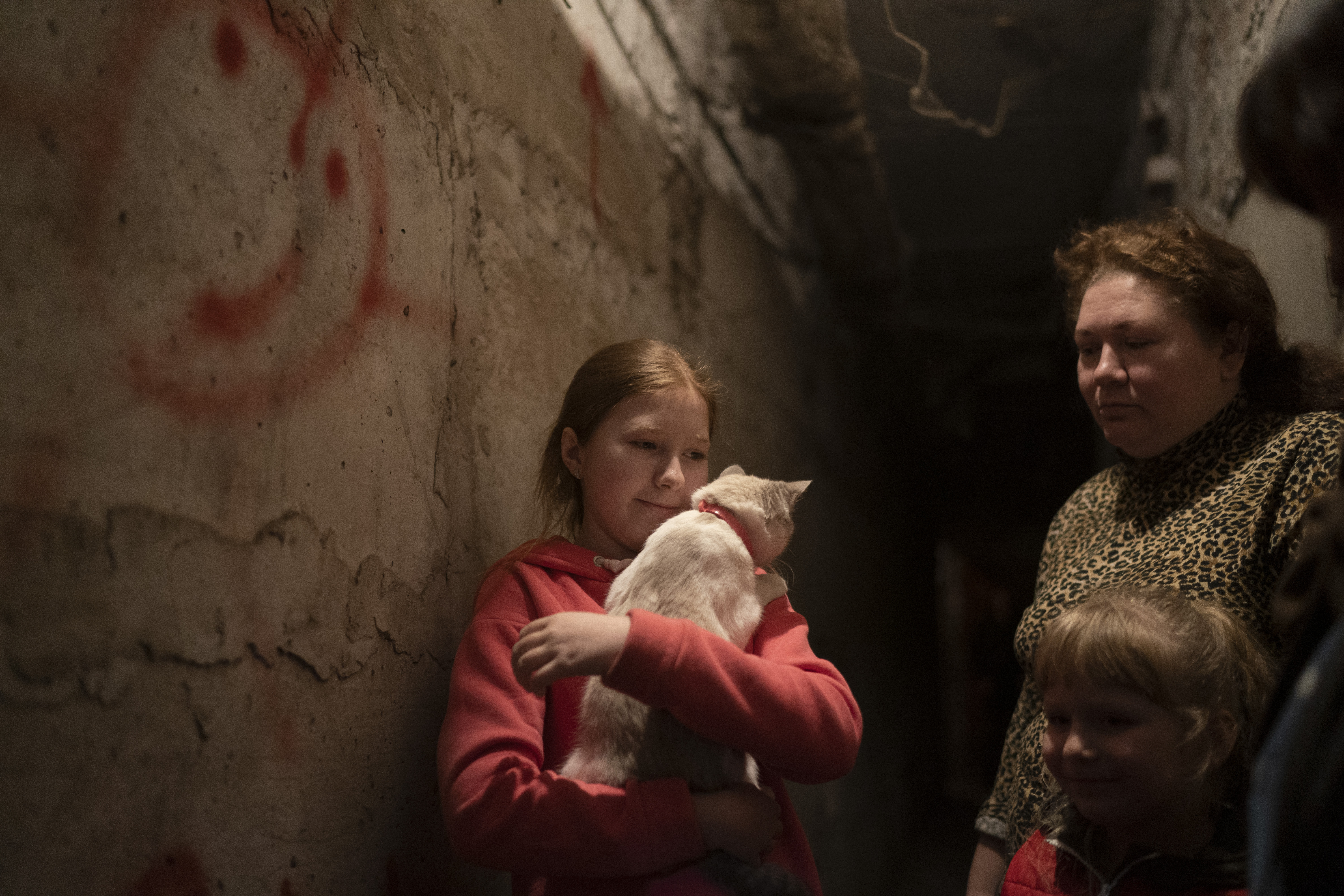 Elizabeth, 12, holds her cat as she takes shelter with her family inside the basement of a residential building during a Russian attack in Lyman, Ukraine, Tuesday, April 26, 2022. Russia pounded eastern and southern Ukraine on Tuesday as the U.S. promised to "keep moving heaven and earth" to get Kyiv the weapons it needs to repel the new offensive, despite Moscow's warnings that such support could trigger a wider war. (AP Photo/Leo Correa) 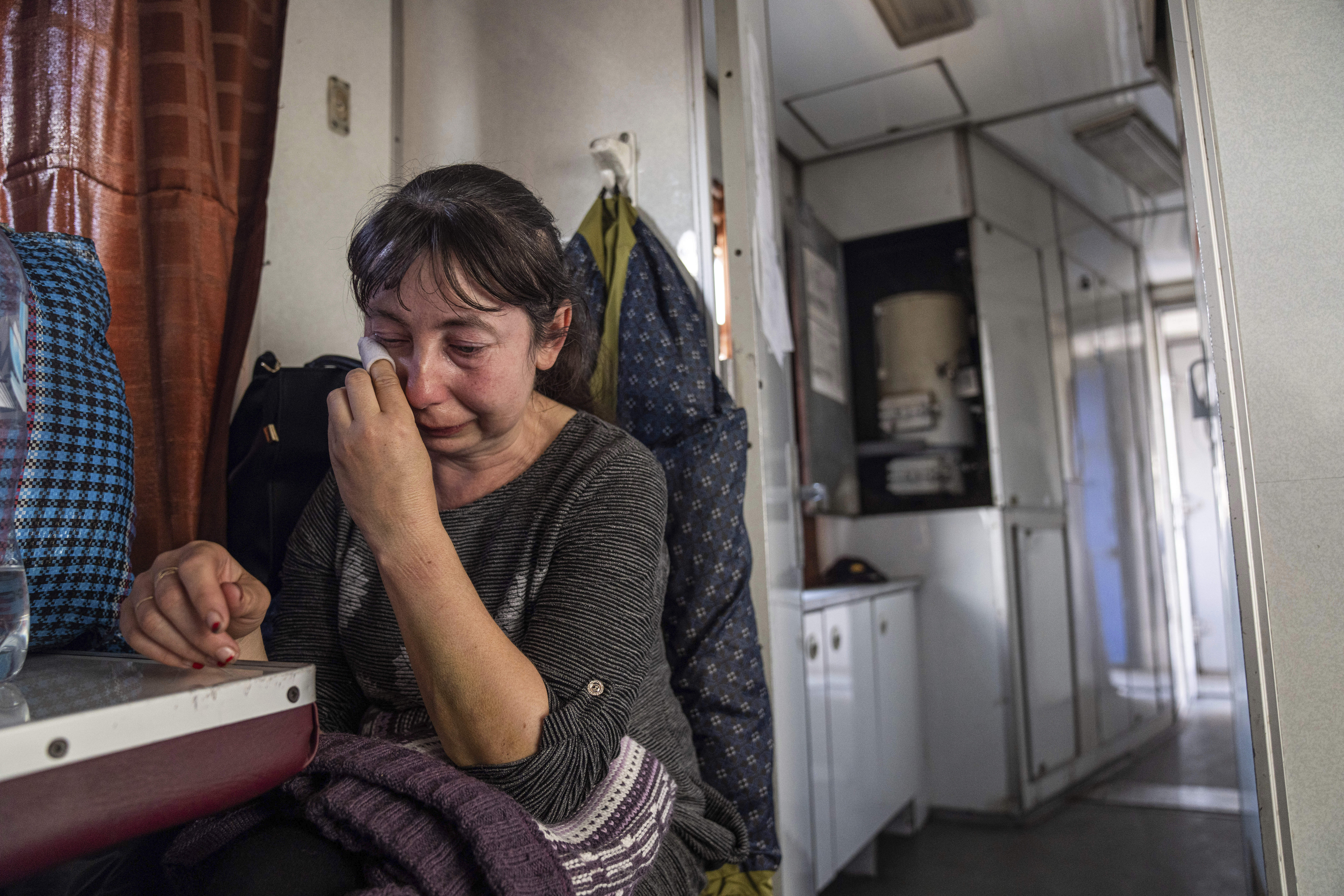 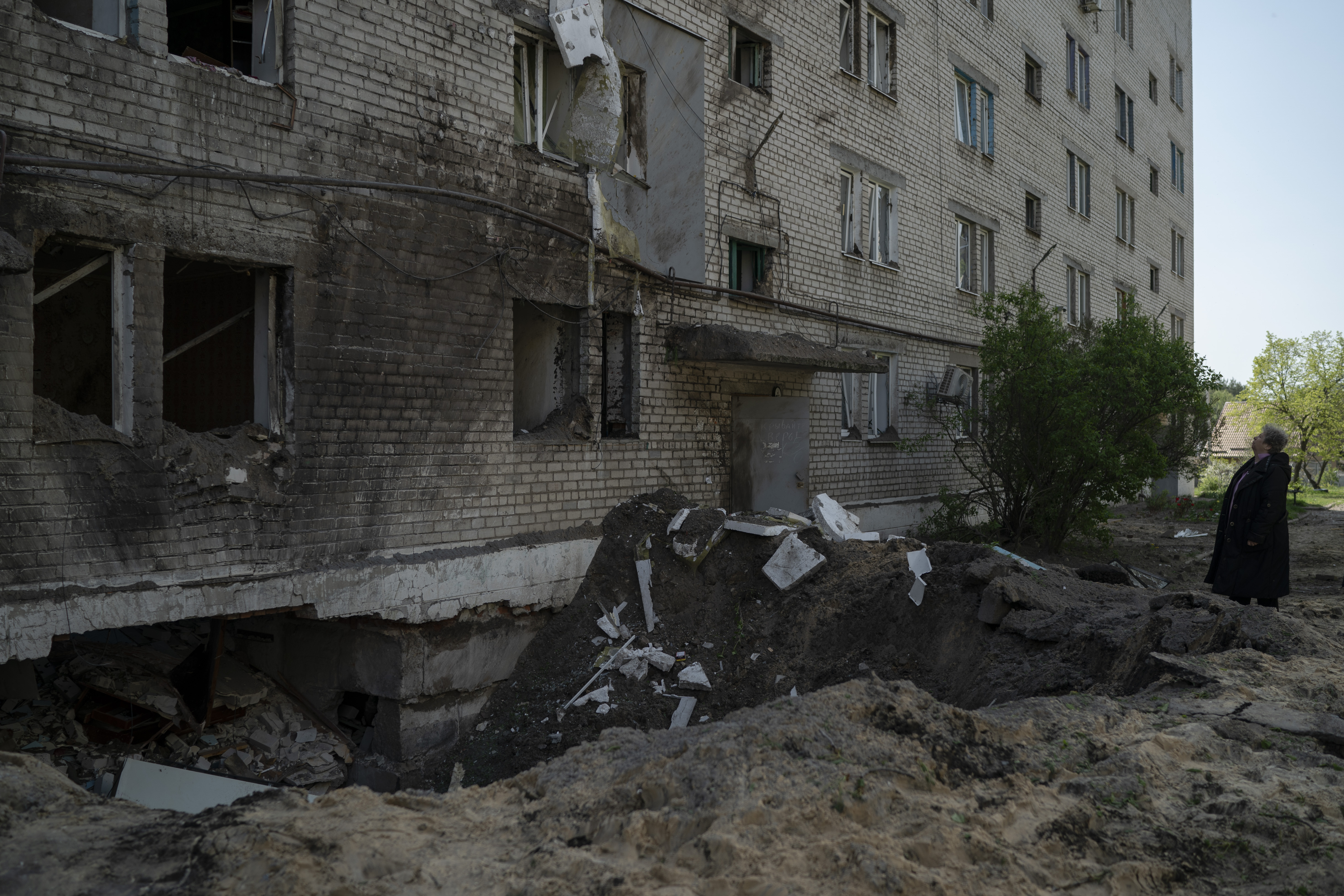 A woman stand next to a crater from an explosion that damaged an apartment and a basement of a residential building killing, according to the residents, a 8-year-old girl during a Russian attack yesterday in Lyman, Ukraine, Tuesday, April 26, 2022. Russia pounded eastern and southern Ukraine on Tuesday as the U.S. promised to "keep moving heaven and earth" to get Kyiv the weapons it needs to repel the new offensive, despite Moscow's warnings that such support could trigger a wider war. (AP Photo/Leo Correa) 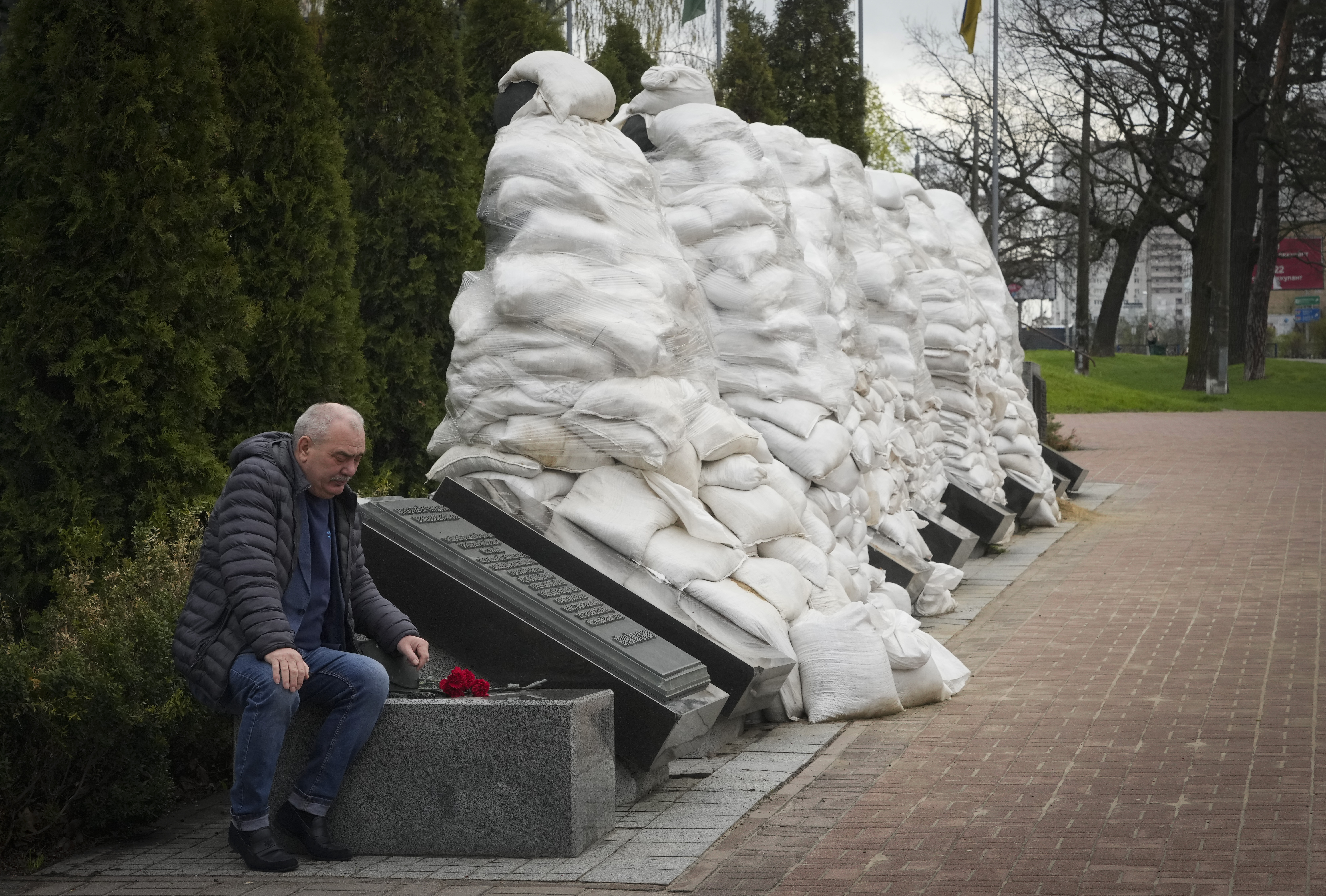 A clean-up veteran pays respect to the Chernobyl firefighters at a memorial in capital Kyiv, Ukraine, Tuesday, April 26, 2022. At right, firefighter sculptures are covered with bags to protect against the Russian shelling. April 26 marks the 36th anniversary of the Chernobyl nuclear disaster. A reactor at the Chernobyl nuclear power plant exploded on April 26, 1986, leading to an explosion and the subsequent fire spewed a radioactive plume over much of northern Europe. (AP Photo/Efrem Lukatsky)