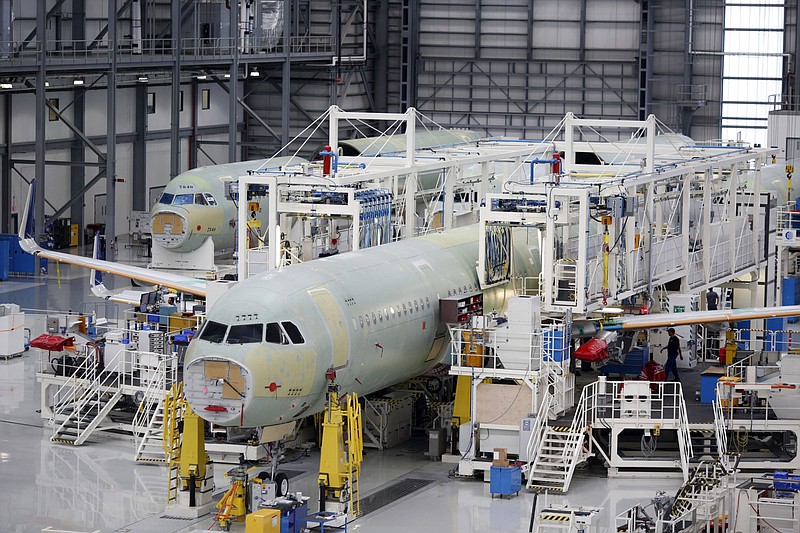 An Airbus A321 plane fuselages sit on the production floor at the company's final assembly line facility in Mobile, Ala., in this 2017 file photo. MUST CREDIT: Bloomberg photo by Luke Sharrett.

Airbus was given the green light to cancel an order for its in-demand A321 single-aisle jets from Qatar Airways, giving the planemaker an incremental victory in a legal dispute with one of its biggest customers.

The Gulf airline had asked a London court for an injunction to stop Airbus from scrapping the contract for 50 planes. The decision by U.K. Justice David Waksman to deny the motion clears Airbus to remarket the jets to other customers.

Qatar Airways, meanwhile, has suffered a setback in its high-profile battle with the world's biggest planemaker. Airbus canceled the A321 order in response to a larger court fight over flaking paint on Airbus's A350 widebody planes. The airline has refused to accept new deliveries of the larger jets since last year and is seeking compensation of some $982 million.

Qatar Airways will now have to find other ways to meet its narrowbody needs. It will also have to pay $331,000 to Airbus in legal fees in the next 14 days.

"Qatar is able to well source alternative aircraft to make up for the shortfall in A321s" meant to be put into service during the fourth quarter of 2023, Waksman said in handing down the ruling.

The judge said leased planes can likely supply Qatar Airways, and that if the airline wins the larger A350 case at trial, Airbus is capable of reinserting the airline into its A321 production plans.

Qatar Airways had sought an injunction to prevent the cancellation until a full trial over the A350 issues. If it wins the broader case, the carrier won't have been in breach of the A350 contract by not accepting unsafe aircraft.

In a statement, Airbus said it was pleased with the decision and reiterated that it would defend the A350 against claims about its safety and airworthiness. Qatar Airways had no immediate comment.

Airbus's decision to pull the A321 order in January shocked the industry, and showed how badly relations between the Toulouse, France-based manufacturer and one of its most important customers had soured.

Lawyers for Airbus said a cross-cancellation clause allowed the planemaker to cancel the A321 contract after the airline failed to accept delivery of A350s. Waksman said he saw validity to this stance.

He rejected Airbus's assertion that relations between the parties have broken down to such an extent it would be wrong to force them to work together.

The judge said that Qatar's argument that it needs the A321s to fly to new destinations such as Bilbao, Spain, or Lyon, France, was "flawed and uncertain" and in any case the routes could be served by other aircraft.

With the verdict on the cancellation given, the court moved on Tuesday to discussing the timetable for the main A350 case.

Qatar Airways is seeking a preliminary ruling on whether Airbus has conducted a full analysis of the problems with the A350s as required. It also asked the court to block Airbus from canceling A350 orders and selling two of the wide-bodies it rejected for delivery to other customers.

Airbus wants the entire case to move ahead directly to a full trial.

One possibility now that both sides have aired their arguments is a renewed focus on settling the dispute.

Airbus Chief Executive Officer Guillaume Faury said back in February that he would like to resolve the disagreement but the airline retorted that "neither Qatar Airways nor its legal team are aware of any efforts by Airbus to try to resolve the situation in an amicable way; in fact, the actual situation is to the contrary."

Information for this article was contributed by Katharine Gemmell of Bloomberg News.