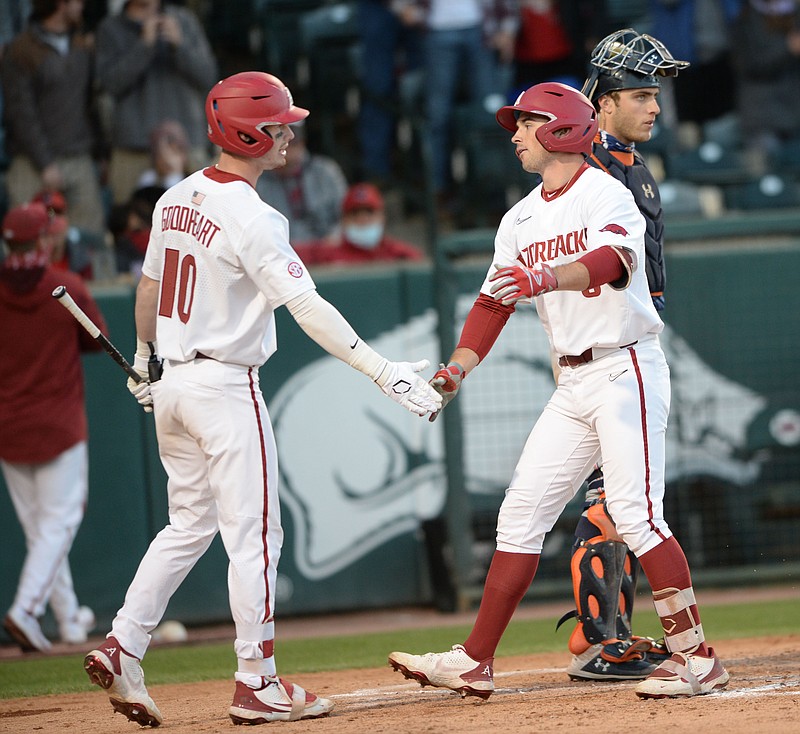 As the 277th pitch of the night bounced in the dirt, Robert Moore was already on his way home, bounding from third.

By the time Central Arkansas catcher Connor Flagg was close enough to grab it in front of the Bears' dugout, Moore was racing toward first base to celebrate with his teammates.

There were plenty of cheers from the heavily pro-Arkansas crowd at Dickey-Stephens Park in North Little Rock -- a sellout of 10,333, to be precise -- but they might as well have been sighs of relief.

The Razorbacks escaped North Little Rock with a nonconference victory Tuesday night, edging UCA 2-1 to extend their in-state winning streak to 14 games. But the University of Arkansas needed 10 innings to do so, struggling to figure out Bears starter Oliver Laufman, who scattered 6 hits and 1 earned run over 7 innings.

"Honestly, I knew it was going to be low-scoring and I knew it'd be close," Razorbacks Coach Dave Van Horn said. "Laufman threw a great game for them, kept us off balance with a lot of ground balls -- we were out in front. He really pitched ahead of us."

Arkansas (32-9) finally broke the 0-0 deadlock in the bottom of fifth inning when Dylan Leach continued his torrid streak against UCA. After hitting for the cycle in the teams' earlier meeting this season -- a 21-9 Razorback win -- Leach sliced a single into left-center field to score Braydon Webb.

But the lead wouldn't last more than a handful of batters. Bears leadoff man Kolby Johnson doubled into the left-field corner, and UCA (16-21) drew level in the top of the sixth with a pair of groundouts that moved Johnson over and then brought him in.

Laufman held onto that momentum on the mound, working around threats in each of the next two innings.

The 6-3 sophomore induced a Jalen Battles flyout after Brady Slavens doubled with two outs in the sixth, and Laufman wriggled out of a two-on, none-away scenario in the seventh -- Leach lifted a high pop-up to third and Moore grounded to second to end the inning.

"[Laufman] was competitive in the zone, I thought he handled the magnitude of the moment, " Bears Coach Nick Harlan said of his starter, who had thrown just nine innings all season prior to Tuesday. "There were a couple of times where he had to battle through adversity early. He did that and was able to settle in and man, he was exceptional tonight."

Equally impressive, though, was Arkansas starter Will McEntire.

The Razorbacks hadn't played a game in North Little Rock since 2019 due to the covid-19 pandemic, and the Bryant native said he wanted to put on a show for all of the friends and family he had in attendance.

After making only four previous appearances as a collegian, McEntire threw a career-best 6 innings, allowing 3 hits while striking out 4.

"We've been finding ourselves behind [3-0, 4-0, 5-0] on Tuesdays and coming back and winning," Van Horn said. "We decided to give him the ball and he's kind of proven that maybe we were sleeping at the wheel with him, so to speak. [I'm] really proud of him."

UCA's best chance to score again came in the top of the eighth inning after Connor Emmet was hit by a pitch with two outs, moving Johnson to second. Van Horn brought in Evan Taylor to face Hunter Hicks -- the Bears' leading hitter at .351 on the season -- and crucially for Arkansas, Hicks popped out to second.

The Razorbacks looked like they were going to finish things off in the ninth when Jace Bohrofen walked to lead off the inning. But pinch-runner Drake Varnado was caught stealing, Webb struck out on the very next pitch and UCA ace reliever Andrew Shoultz got Peyton Stovall swinging to end the inning.

Shoultz's strong relief outing came to an end in the 10th, however.

Leach grounded the first pitch of the inning to Bears second baseman Tanner Leonard, who bobbled the ball before throwing to first for the out.

Van Horn very much disagreed, storming out to argue with first-base umpire Augustus Griffin. He was not ejected, but the fiery outburst ignited both the crowd and the Arkansas bench.

"We got a lot of energy in the dugout seeing our coach fight for us like that," McEntire said.

Moore singled into right with one away, advancing to second on a walk and third on a fielder's choice.

Not even five minutes later, he swept his foot across home plate, extending the Razorbacks' midweek winning streak to 10.

Harlan said the scene Tuesday was like the College World Series, but perhaps with even more energy.

"The fans were awesome," Van Horn said. "They were loud -- probably more than ever because we were playing an in-state school. ... There's only a few guys on my team that have ever experienced this, so I think they enjoyed it."